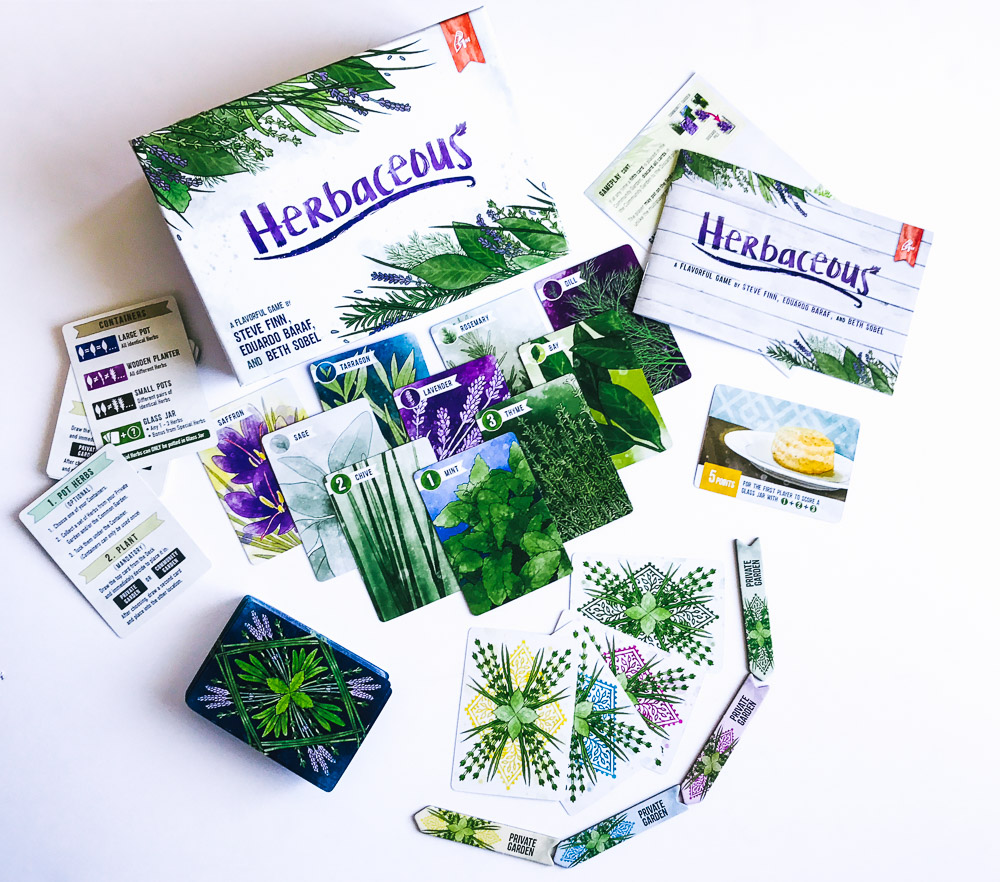 Herbaceous was successfully funded on Kickstarter on September 13, 2016 with 2,208 backers. Pencil First Games is owned and operated by Baraf, and Herbaceous marked Pencil’s fifth successful Kickstarter. 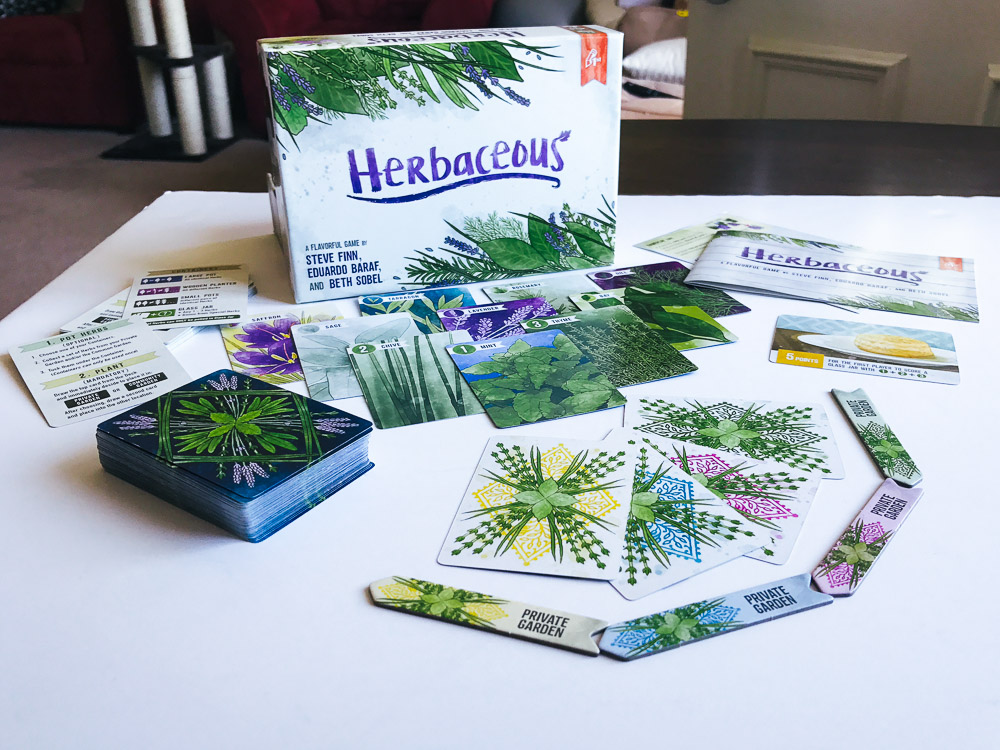 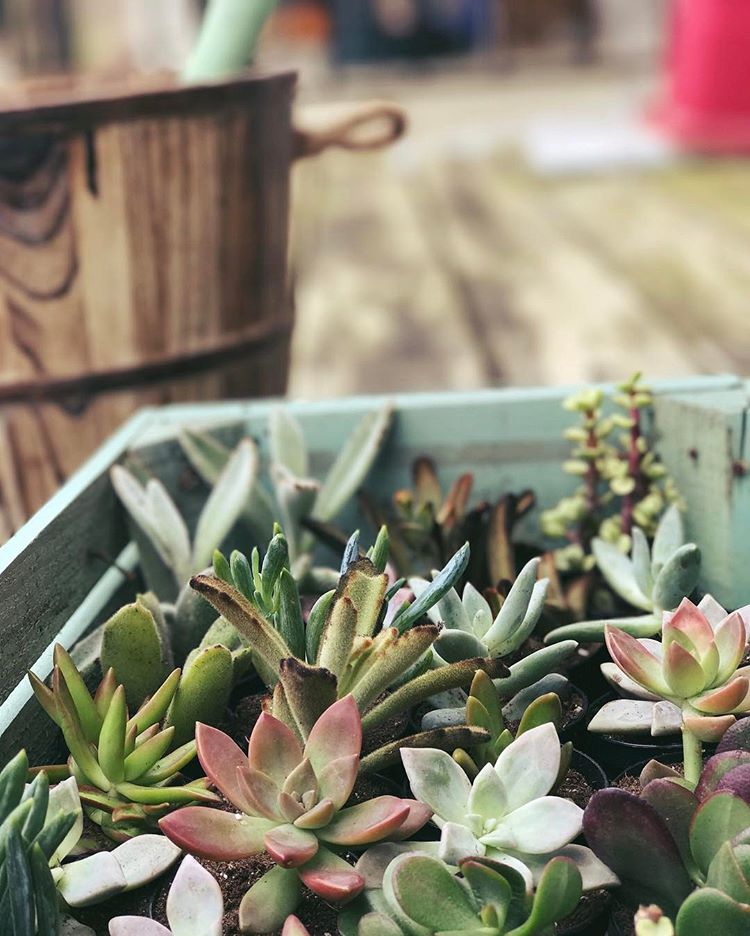 Some of the beautiful succulent arrangements my wife has put together.

When my single friends ask me about marriage, I usually always share the same story each time. The knowledge I’ve gleaned in my short 1.5 years of newly-weddedness is I first tell them how marriage teaches me I need to love my wife and put her before me and my own preferences. Then I tell them you don’t even need to have the same interests or personalities. Instead, what happens is you have two people who love each other so much they might even take on each other’s interests.

If we revisit my first tabletop article on Geeks Under Grace, you’ll notice my wife is one who was never a gamer of any sort, and in fact, was quite turned off to it. Since we dated and were wed, now she’s the sort of the woman who will recommend games for us to play, and even bother me daily to play The Castles of Burgundy over and over and over again. From my end of things, I can’t look at any sort of lovely green thing (read: plants) without thinking of the hundreds of hours she’s poured into assembling a beautiful container garden of succulents, baby herbs, cacti, air plants, and salsa essentials. When I once didn’t care much for growing things, I now obsess over encouraging her care of plants and flowers. She does it all so wonderfully.

I tell you all of this because reading a review request for Herbaceous brought back a lot of sweet memories with my beloved. I’d heard of this charming game only by name, so glancing through photos of the watercolor card art sold me. She loves watercolor artwork, so blending beautiful card art and things of the earth seemed like a shoo in with her. I got in touch with designer Eduardo Baraf, sent a few emails back and forth, and finally got to bring Herbaceous to the table with my wife. 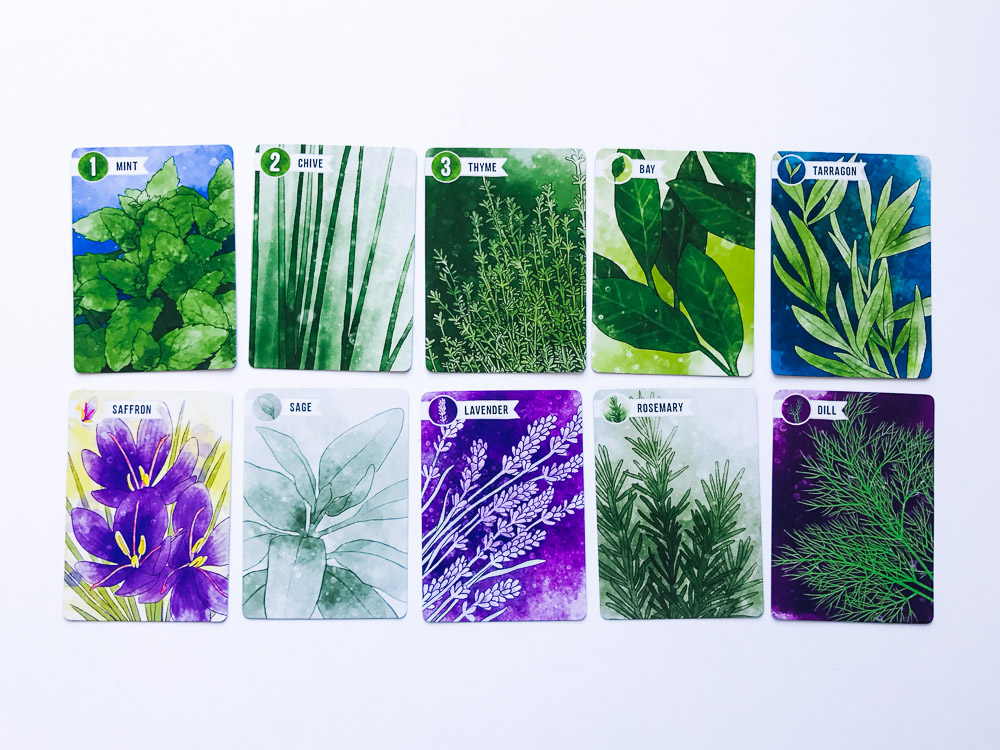 The many herbs to choose from.

Herbaceous is a 1-4 player game where players press their luck and attempt to assemble high-scoring containers of herbs. The deck features a slew of various herbs, including rosemary, thyme, mint, sage, and more.

On your turn, you must first decide if you wish to pot herbs into one of your containers. Players have four containers to choose from, but rely upon specific variations of herbs to score points.

Knowing how and when to pot herbs is the key to success in Herbaceous. We’ll come back to potting, but regardless of whether you choose to pot or not, the player must then draw a single card from the herb deck. This drawn card must be placed in one of two places: their own private garden, or the public community garden. Regardless of where you decide to place this card, you must draw one more card and place it in the garden opposite of where you placed the first. 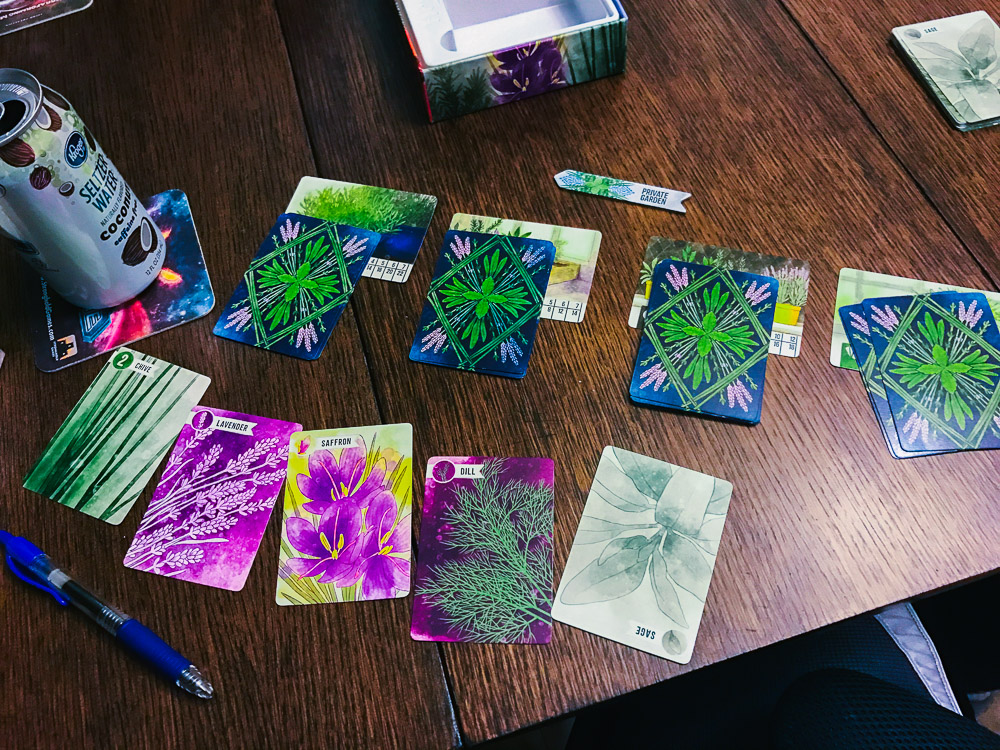 My finished game. I’m usually at an advantage for potting as much as I can, as quickly as possible.

This back and forth of placement means two things, and they are both tactical. One, you are guaranteeing a sole herb for yourself for future potting. Two, you are giving free reign to your opponents around the table for the free-for-all community garden.

See, at the beginning of each player’s turn, when they choose to pot, they can take any herbs from their private garden, plus any and all herbs from the community garden that match the container they are potting into. Herbaceous plays quickly, but players are constantly weighing the value of the cards before them, and learning to pace themselves correctly in order to grab valuable combinations of herbs in the community garden. By taking more cards from the middle of the table, you keep the herbs in your garden, negating points from your opponents.

Each of the containers have specific goals, and depending on player count, you’ll probably find yourself doing some guesswork and card counting. Fewer players mean more cards are removed at random from the herb deck, which adds a fair bit of replayability. Each of the seven basic herbs have nine cards each, with each special herb having three each. 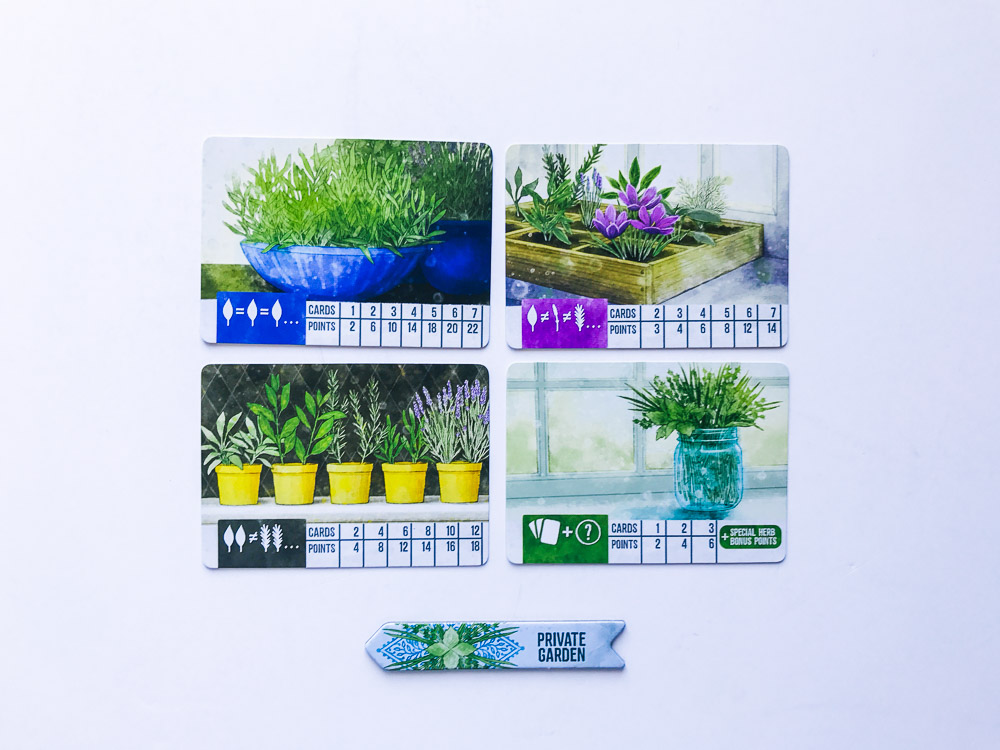 Carefully choose the right pots for the right herbs.

You might be saving up the relentless tarragon you’ve been drawing for your large pot, only to find players around the table have let a surplus of sage accumulate in the community garden. Of course, maybe you’d want to plant two of the sage, along with two of your tarragon and other herbs in the small pots instead.

I’ve found a bit of the game’s strategy falls on player’s aiming crosshairs to fill their glass jars first. The glass jar can be filled with any three herbs. However, any special herbs will grant additional points to the potter. If one player can pot one of each special herb, they will receive the herb biscuit, totaling 17 points altogether, for a measly three card payment. Once a player pots and receives the biscuit, no one else can get it, but might still aim to put special herbs in the glass jar for the extra points.

Players might begin the game putting regular herbs in the middle, hoping for their second draw to be a special herb, inching them closer to the biscuit. Maybe you’d rather ignore the biscuit and just grab whatever special herbs show up in the middle just to make it more difficult on your opponents.

Herbaceous doesn’t take itself seriously, and this plays to the strength of the game. You’ll notice I’ve been gabbing strategy on potting herbs, and it’s a silly thing. It’s fun though. The back and forth of pressing your luck, hoping you can hold out until one more turn around the table to pick up another six points is adrenaline pounding. On the other hand, you’ll find this game quite accessible with those who aren’t really into games. 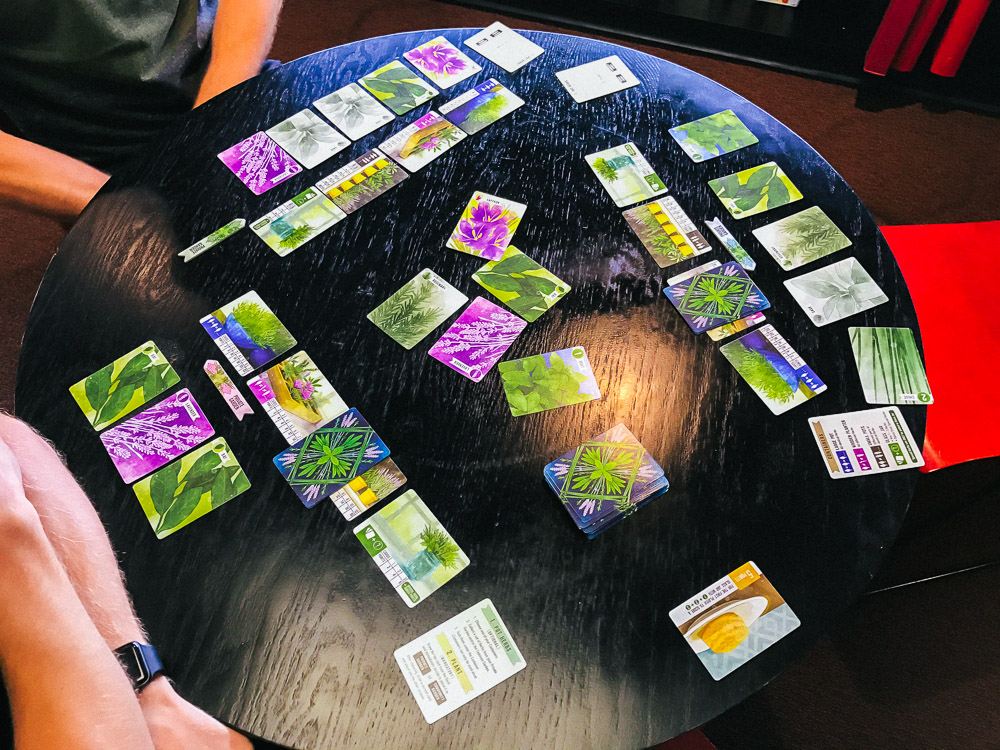 The community garden is bumpin!

Herbaceous is certainly a sight to behold on the table. Each herb has unique colors to it, accentuated by the illustration of the herb, along with the colored background. Light dust particles hover above and over the many herbs. Saffron herbs are purple with a bright yellow glow behind them. The glass jar sits alone on a window sill, begging for mint and chives. Private garden tiles feature intricate backdrops, depicting player color. The herb biscuit sits flatly on a plate, players around the table joke about being the first and best baker in the group. We joke about the biscuit, but let’s be honest: we want those points.

Herbaceous teaches quickly, as it should. The rulebook is a short read. The biggest hangup I’ve had with players is teaching when and how you pot, versus how you choose to plant cards. The confusion lies around the community garden being a public pool of cards. People haven’t been reaching ruthlessly into each other’s private gardens by any means, but they haven’t understood when they take cards from the middle. I’m going to play it safe and assume it’s partly my own fault for not differentiating these pools well enough. 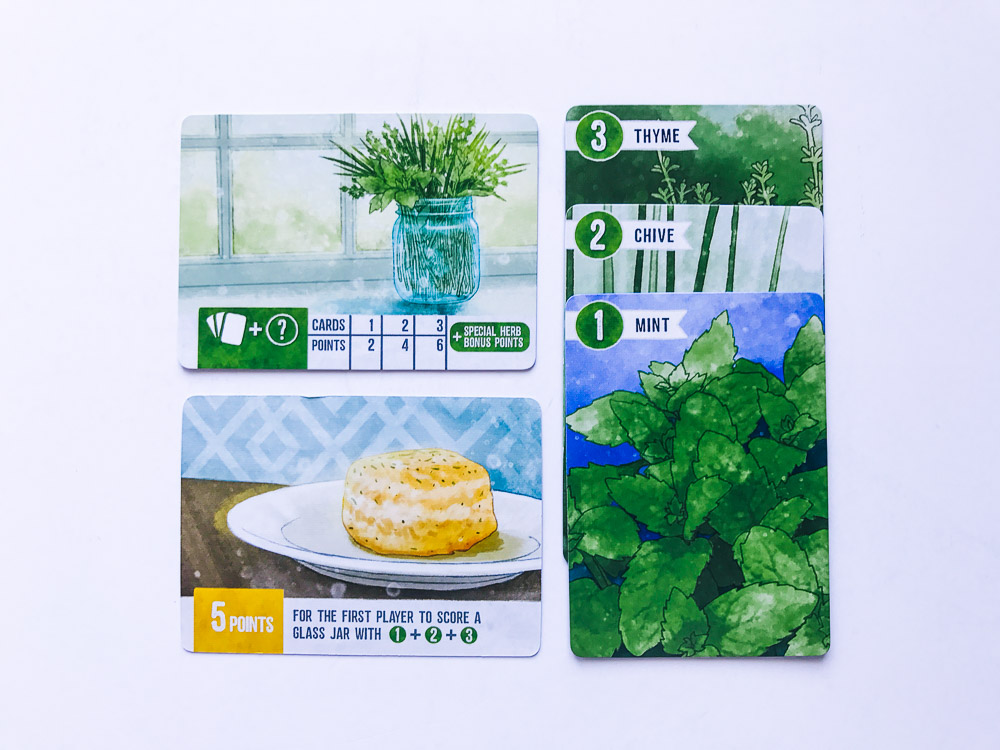 You’ll need special herbs if you want to maximize the value of the glass jar.

One can also partake in a few solo games of Herbaceous. This mode has one player cutting the deck in half and placing cards into a discard, community, and their own garden. A fifth card in the community garden equals discarding all of them, so the solo gamer will need to move and react quickly to maximize points. While I’ve not played it, there is also a team variant where players sit across from their teammate. You will plant a card into your garden, your teammate’s garden, and finally one into the community garden.

One of my two beefs with Herbaceous is the RNG (random number generation) of card drawing. This is less an issue with more players, because more cards end up in the middle of the table, so regardless of the strategy you go for, you’ll probably find a better solution by the time it gets back to your turn. It’s hard to aim for a specific herb in your private garden because you never know what’s going to get drawn next. Of course you can card count to some extent, but that mostly comes into play about halfway through the game.

My other deal is with the variability of the game. I can see this one coming out pretty frequently in some groups (maybe family groups), but I think I want some more variation. I like the length of the game, and it has just enough push your luck in it to keep me engaged. My wife and I have really enjoyed the art and the theme. We aren’t entirely turned off to the game by any means, but it’s at least probably made it into an infrequent rotation of short games we will play. I will probably bring it on every vacation we go on, but it won’t play as a main course of a game night for us. It shines more with a higher player count, but I’d be interested in trying out the team variant to see how well it works. I’d be remiss to mention the Flavor Pack expansion, which throws events into the game, granting some additional actions as you work your way through the deck. This might add enough spice to keep it interesting, but I haven’t played it, so I’m not sure.

I don’t want to sour you on this one. It has quite a bit of fun in one box, and plays short enough to be an excellent choice in terms of filler games. I’ll just tend to 3-4 players instead of 2. If the art and gameplay are knocking on your door, buy this one and don’t look back.

A review copy of Herbaceous was provided by Pencil 1st Games for a review of the game. 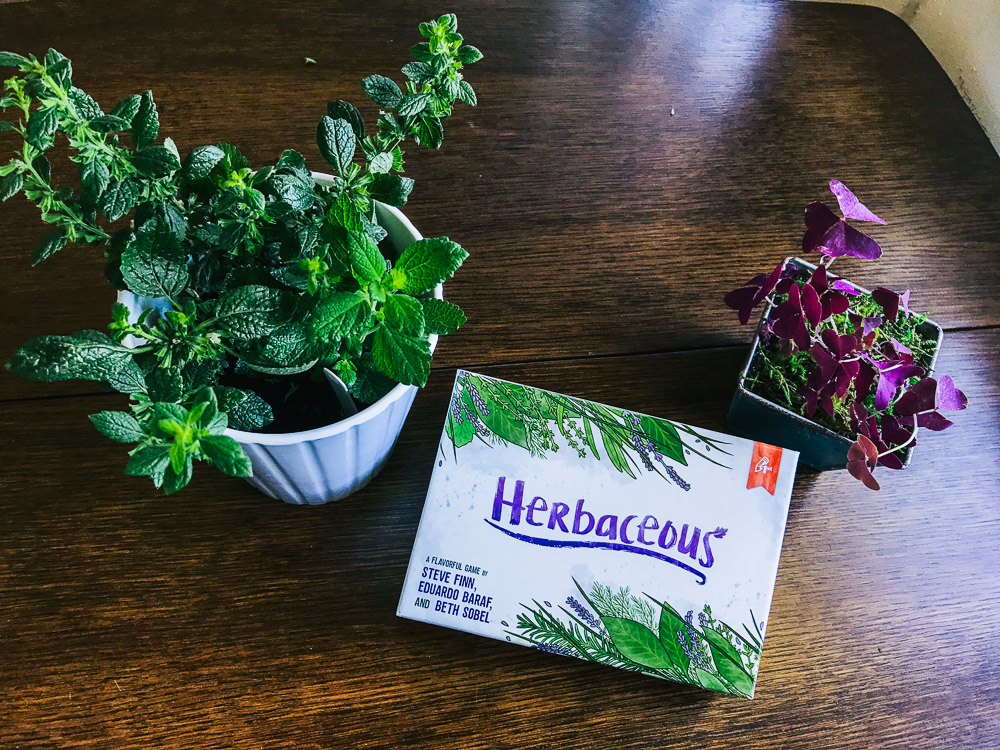 Herbaceous is a charming filler game with lovely art and quick games. It’s not hugely replayable, but brings enough excitement and laughter to belong in most collections.