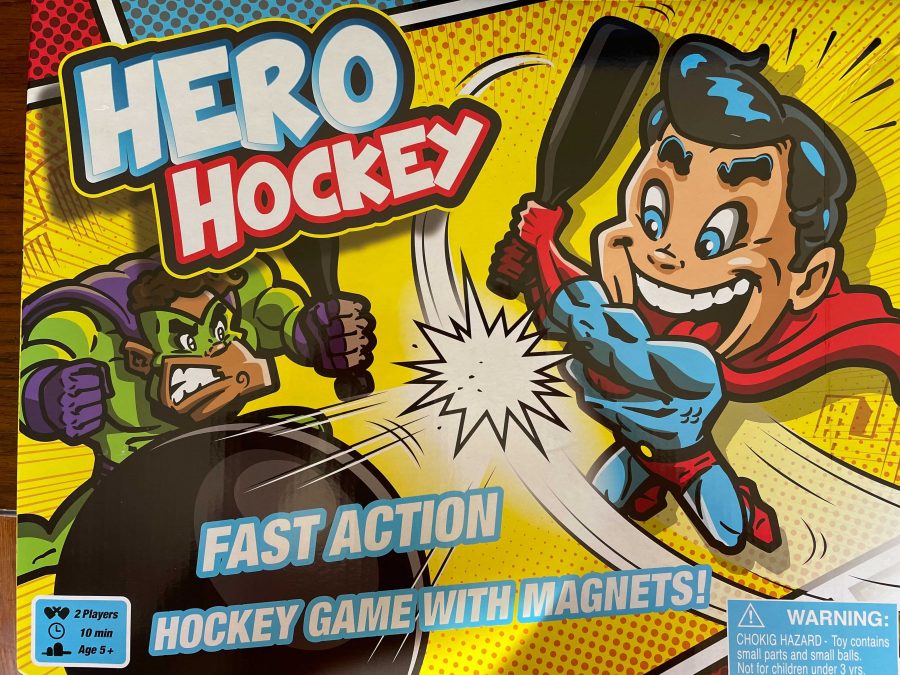 Hero Hockey is an adaptation of the Danish parlor game Klask that sees two players trying to score goals while controlling their figure with a magnet under the board. Hero Hockey gives the game a little more personality and theme, and is less expensive due to plastic construction versus the original Klask’s wooden frame. So is this adaptation a slam dunk or a missed field goal? Read on for our review!

If the mix-matched sports metaphors are lost on you, I’ll explain. Despite being called Hero Hockey, each of the characters players use look like buff superheroes wielding baseball bats. (Why they don’t have hockey sticks is beyond me.) Players will attempt to maneuver their heroes and score on their opponent, while trying to maintain control of their avatar. At any point if someone loses full control of their hero or falls into a goal, it’s a point for the other team. This mechanic is great because it gets rid of anyone’s ability to just spin as hard as they want to score. If you’ve ever played against someone who does this incessantly in foosball you’re probably nodding right now. But again, if the heroes didn’t have baseball bats it wouldn’t even have come up.

The board easily snaps together when you first get it out, and since it’s only a few pieces will store away again nicely. It does advise that you use your off-hand to rest on one of the legs of the game board, both to steady it and keep it from moving during the contest. In my experience with the game, this is definitely a good idea, since the light plastic board will jump or move at the slightest bump.

What’s nice about Hero Hockey is that it is immediately obvious at first glance what the object is, and how to win. And since the magnets add a buffer layer to the proceedings, it levels out the playing field between players with disparate ages, much like strategy games with a lot of dice rolling. In other words, my grade-school-aged kids were able to still have fun and score some goals without any help from me.

Hero Hockey is a decent albeit somewhat confusing adaptation of Klask, and I would definitely recommend it over foosball both due to it being more fun, and taking up less space. While overall the original is better and sturdier, Hero Hockey keeps itself viable by lowering the price point. Parents or anyone who wants a quick and fun dexterity game with hardly any setup should check it out.

Anyone who wants a quick and fun dexterity game with hardly any setup should check out Hero Hockey.