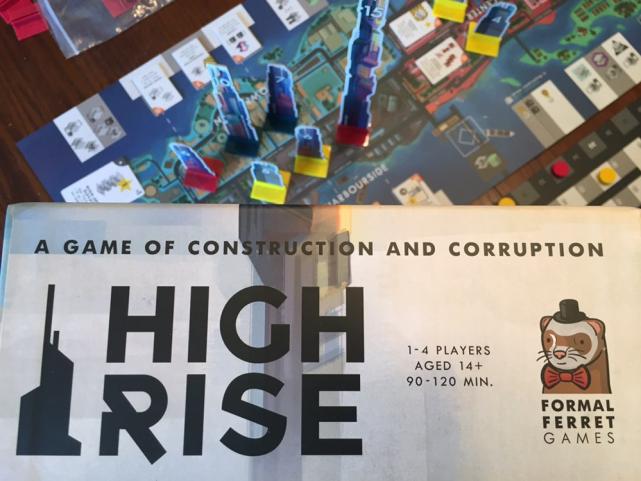 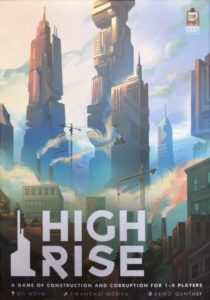 In High Rise, players are tasked with building up towering skyscrapers over the course of 2-3 rounds. Players will make their way around the outside of the board, stopping at various places to gain cards, activate tenant powers, and collect floors. Once they have enough and land on a build space, players can construct their towers. Will you become the leading construction mogul of this New York-inspired island of looming structures, or will your Corruption drag you down? Read on for our review!

Players are offered or forced at different places on the board to take Corruption, usually in exchange for extra actions or resources. Players with the most Corruption at the end of the game rounds and the finale are penalized. 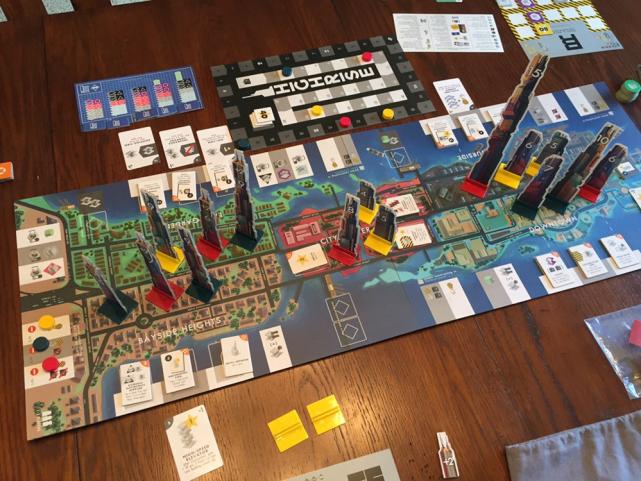 High Rise ends up feeling like a cross between Tokaido and Blueprints, but with far more player choice and possibilities. Play consists of each player moving around the outside of the board, stopping at various places. Some spots will gain players new floors of specific colors, while others will provide random draws or allow players to exchange what they have. Often these spots give players the option of taking a second floor at the cost of also gaining Corruption. Spaces on the board that are linked to building spots have Tenant powers, which can do anything from give players bonus floors or Victory Points to letting them gain or lose Corruption. Only by combining a full construction area and Tenant powers will a player be able to construct a monolithic 15-story tower. 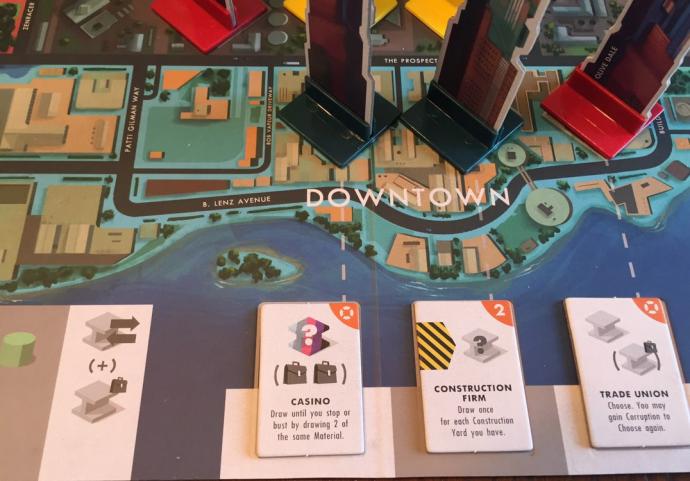 When players are building, they have to match the floors on the blueprint for that round, unless they have UltraPlastic. UltraPlastic is like a wild card – it can be substituted it for any other floor. But if a player puts UltraPlastic on a floor where a blueprint calls for it, they get to add another floor to their tower. This is especially helpful in the third round when blueprints can have two UltraPlastic in them. Another way to get a bonus floor when building is to be the first player to build that specific tower.

Once players have paid the cost to build, they get to place their buildings and reap the rewards of the Tenants that are next to them. Additionally, they get to draw a random floor any time another player lands on that space. Players can build in whatever neighborhood they are currently in, or, for one Corruption, they can build wherever they want. Players can also draw a floor when landing next to their own tower – again, at the cost of one Corruption. 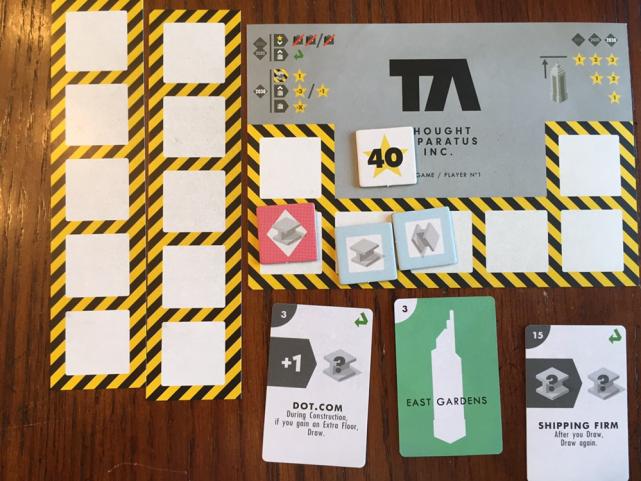 Starting player board on the right, with two smaller additional construction yards on the left. These can be purchased, for 1-3 Corruption depending on the game round.

Once players have all made their way around the board once, the round ends, and bonuses and penalties are handed out. Depending on which round just ended, players will get points for the tallest towers on the board, as well as the tallest in each zone. Then they will be penalized for having large amounts of corruption, especially if they are the player with the most. After round upkeep new Bonus tiles are put out based on the new year (game round). The Full game is played over three rounds – 2010, 2020, and 2030. The introductory and Standard games only last two rounds and let players start with a building out on the board. The game designer has stated he included these options for players who don’t want a longer game.

At first, High Rise can feel like a lot. I was initially intimidated by the 35-page rulebook, but the Introductory game mode proved incredibly helpful. Even if you’re used to crunchy, heavy games, it would help to fully understand the game by playing this intro mode. After putting a couple games under my belt High Rise quickly went from “oof that’s a lot” to “Hmm, play again?” It gives players a lot of choices, which is a double-edged sword; if you or someone you play with is prone to action paralysis, you might have an issue here. But once I got a feel for getting a few skyscrapers built, and how even being in second place for Corruption can stop you from winning, I really began to appreciate this game. Not only does it give you a lot of options in-game, but setup can be different every time as well.

Each game round gives you a choice of five different blueprints, and there are 45 different Tenant Tiles and 85 Power Cards. There’s only space for 15-20 Tenants per game, depending on the game mode and number of players, so someone could play several times and not see the same ones twice. This gives High Rise a huge boost to replayability, since the only way players will be able to pull off a 12+ floor tower is with the aid of Tenants or Power cards.  And because players start out with few or no resources and the early blueprints are shorter, it’s really satisfying to watch the city grow as the decades turn. Neighborhoods with modest 2-5 floor buildings are upgraded to taller and taller towers as players’ resources grow. As players build in full neighborhoods, they replace the smallest building with their new construction as long as it is a taller building. Happily, the only thing lost is getting a free random floor when someone lands there; players don’t lose any points because their tower was demolished. In fact, other than taking a spot or the last Power card someone was wanting, there isn’t much take-that to speak of. 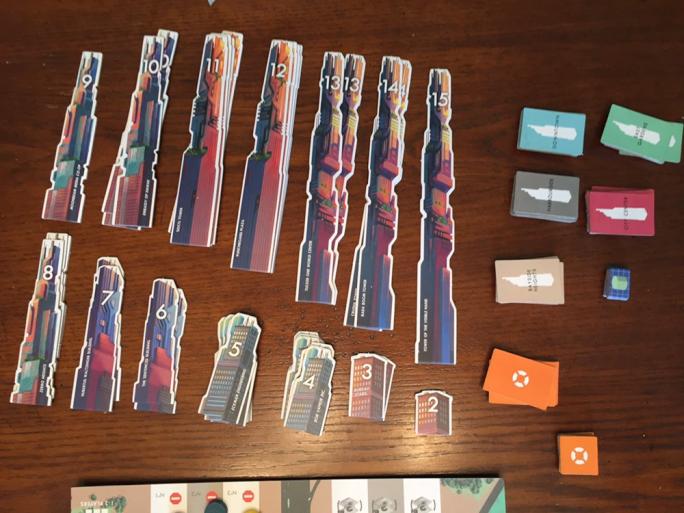 After the 2030 round has concluded and the dust settles from all the construction, it is really satisfying to look at the game board, and the various buildings that players have made, even if you end up losing by a few points because you were a bit more corrupt than the next player (yes, speaking from experience here). High Rise is a bit heavier than most city-building games I’m used to, but that’s not a bad thing. As long as AP doesn’t bother you, it has a lot to offer with player choice and replayability, and looks fantastic on the table. Fans of city-builder games should definitely check it out.

High Rise is a bit heavier than most city-building games, but it has a lot to offer with player choice and replayability, and looks fantastic on the table. Fans of city-builder games should definitely check it out.