Review: Hunt for the Ring 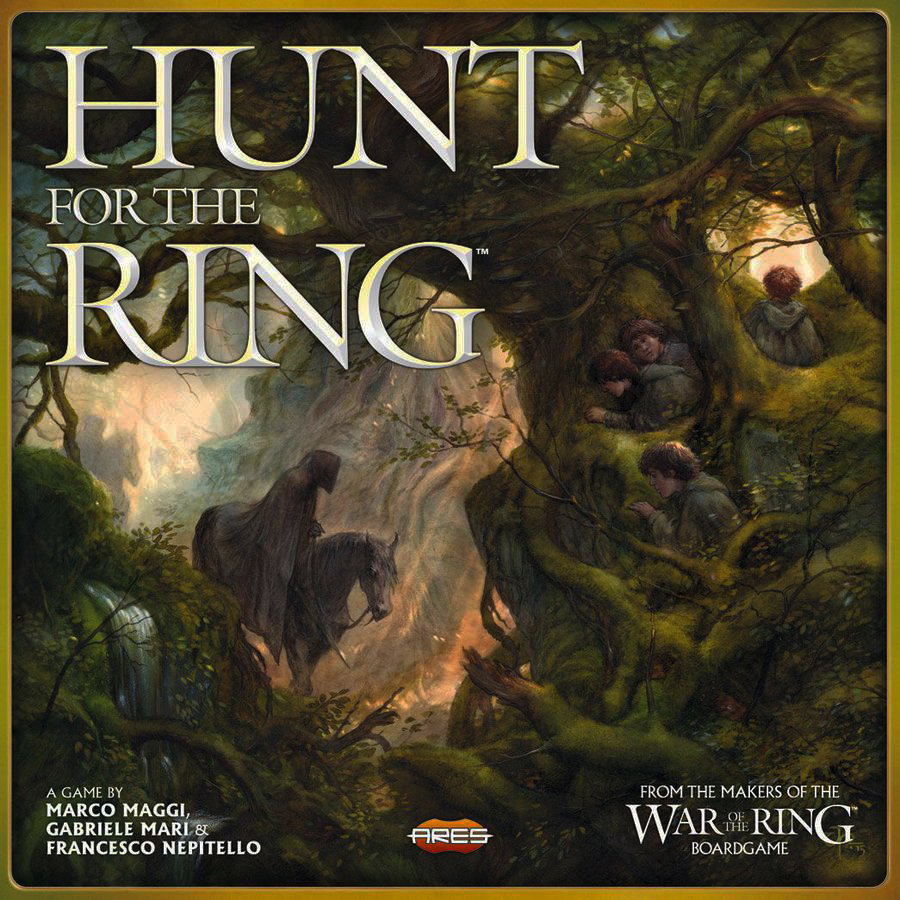 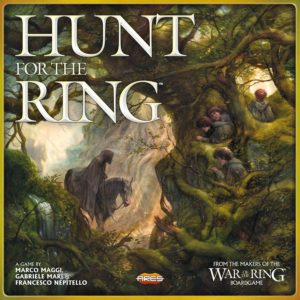 Although it comes from the makers of the bloated, sprawling War of the Ring, Hunt for the Ring shares very little in common with the hours-long dudes on a map experience. Where War of the Ring dogpiles mechanisms on top of each other haphazardly in an attempt to recreate the entirety of the political and military conflict of the Lord of the Rings novels, Hunt for the Ring is a far quieter, more focused affair. And it’s better for it, letting players experience the intimate, personal journey of Frodo and the humble beginnings of the Fellowship that would one day topple Sauron’s empire.

There is little to be concerned with in Hunt for the Ring. Unless you are particularly sensitive to JRR Tolkien’s fantasy world, lightly sprinkled with magic and dark forces gathering to snuff out the light, you should be in safe territory here.

Hidden movement games connect with players on some primal level. Maybe it’s because we’ve all played hide-and-seek before as kids, or maybe the concept of hiding from a powerful predator resonates with our fear of the unknown. Whatever the case, Hunt for the Ring is the latest in the genre, and it’s a particularly good one because it understands what makes a tabletop hide and seek game really work: blatant asymmetry, daring escapes, near-misses, and narrative flare.

I could describe the rules in great detail for you, but you’d miss out on the heart of the game, the moments that will keep drawing you back to this one, the stories you’ll tell friends for years to come, the spectacular plays you’ll turn over in your mind later that night. This is a game of peaks and valleys: careful setups paying off in big plays or narrowly missing to create a narrative you’ll never forget. 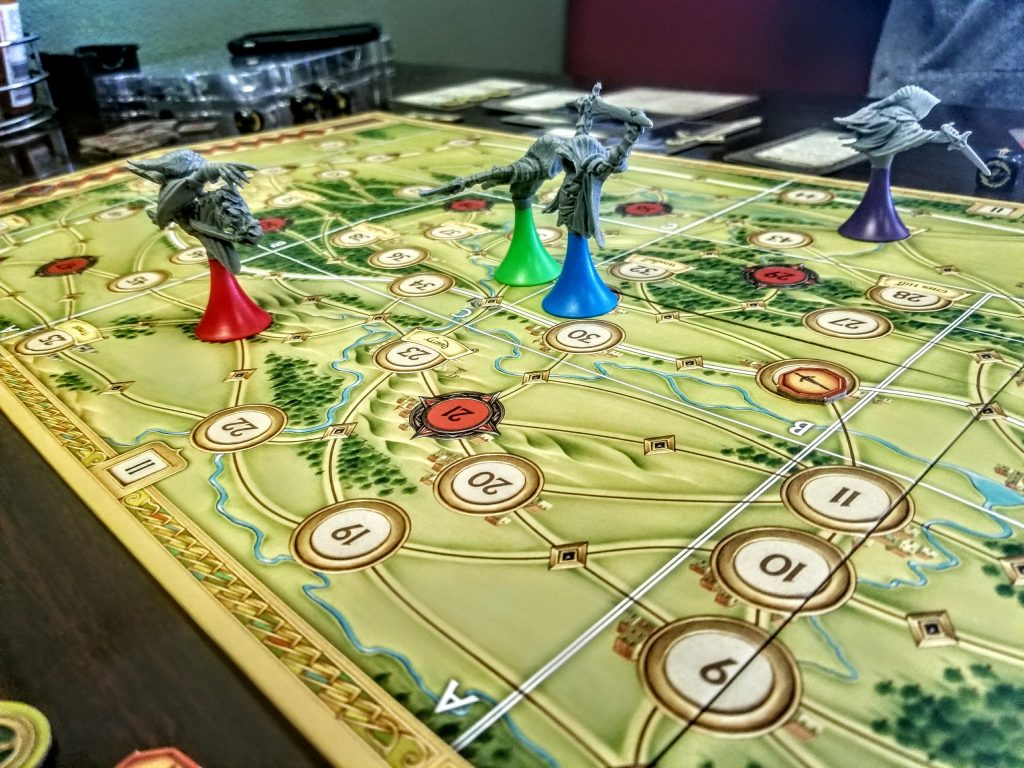 The Nazgul searching desperately for that blasted piece of jewelry.

Controlling the Nazgul, whether as a single player or in tandem with some friends, is an exercise in careful coordination. The agents of Sauron need to hem the slippery Frodo and his friends in from all sides if they hope to win. Once Frodo is located, the vicious hunters move in a frenzy to close in on him and do as much damage as possible before he slips away again, trying not to leave too many avenues of escape. The Nazgul also get a nifty ability upgrade system, giving the Shadow player fun short-term goals to shoot for as the game progresses, an important element in making the game arc feel dynamic and unique.

Playing as Frodo is a simpler affair. You’ll make feints and desperate dashes, all while employing clever misdirection to send the Nazguls on a wild goose chase across the Shire and beyond. Watching a well-timed sprint down the road as your foe searches in the entirely wrong location, certain he’s got you pinned, is a thrill that isn’t often matched in board gaming. The game gives the Fellowship player some other simple levers to pull, like special one-off abilities and cards to throw some sand in the Nazgul’s faces, but for the most part it’s a game of knowing when to move, when to hide, and when to bide your time. I love games that let you play the other player more than you play the bare mechanics of the design, and this is a great example.

The game is a two-part affair, with the first half utilizing a more standard hidden movement approach, and the second half featuring more automated movement on the part of the Fellowship. Cards will direct Frodo’s path in this portion as the Fellowship player tries to hang on until the very end, controlling Gandalf and other allies trying to fend off the Nazguls’ constant assaults. The first half is a little more open, while the second represents a sort of payoff of the decisions and investments you made in the early game. Both halves are worthwhile, and I do appreciate having the option to play a breezy 90-minute half-game rather than being forced to play the whole thing all at once. 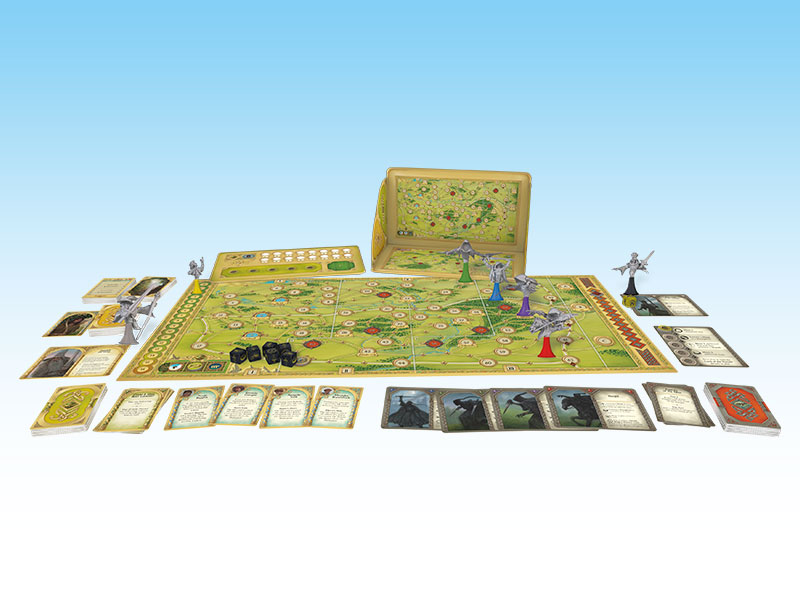 Game board and components

Still, I’m overly sensitive to bloat, and Hunt for the Ring stumbles here a little bit. Why the two-part structure at all, when the game could have been a brutally tight 60-minute game you could play a couple times in a sitting? As it stands, it’s a little difficult to see this one getting chosen more often than ultra-lean offerings like Whitehall Mystery or Scotland Yard. This game is arguably richer with a stronger thematic tie, but it has stiff competition in its category. The designers resisted the urge to make this one as sprawling as something like Fury of Dracula or even Letters from Whitechapel, but there’s still a missed opportunity here.

Adding to the bloat is the horribly over-complicated rule book. For a game that can be explained in a few minutes (edge cases aside), there’s no reason for the monstrosity they stuffed in the game box. There are unnecessary definitions for adjacency and proximity and every manufactured game term you can imagine, and they just didn’t need to be in here. I know we’re talking about Ares Games of War of the Ring fame, but come on.

These issues aside, Hunt for the Ring is a fascinating experience that any Lord of the Rings fan will love. A game that lets you rewrite the first part of Tolkien’s epic novels with one friend or several, Hunt for the Ring also manages to be an exciting game with plenty of narrative pizzazz.

Hunt for the Ring is a wonderful game, weaving a fascinating narrative for players as it draws them into the thrilling cat-and-mouse chase between Frodo and the Nazgul.

Kyle is the editor in chief of The Babylon Bee and co-author of How to Be a Perfect Christian. In addition to writing lots of Christian humor and satire, he enjoys writing about tabletop games, video games, and other aspects of geek culture.