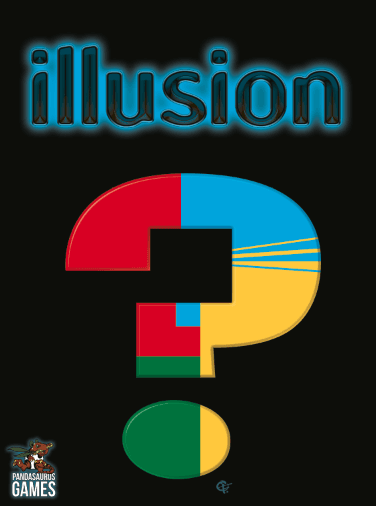 Illusion is a small game, consisting of a deck of cards with unusual illustrations in red, yellow, green, and blue. The colors are represented in different amounts on each card, and players try to determine which cards have more or less of a certain color. Due to their odd imagery, however, this can be surprisingly tricky, and it makes for an interesting visual exercise.

I love puzzle games and games of spatial reasoning, and Illusion is… neither of those. Or maybe both? I really don’t know.

lllusion is a game of visual perception from mad scientist/game designer Wolfgang Warsch. In this game, players try to compare the amount of color in various abstract images, arranging the cards accordingly. The goal is to be the first to earn 3 arrow cards – essentially, to win 3 rounds.

Since this game is so visual, it will be easier to show how it works, rather than trying to explain it. To do this, I will give an ongoing example that illustrates how a round might look.

To start, an arrow card is drawn, showing 1 of the game’s 4 colors. Then, a card is drawn from the color deck and placed next to it, like this: 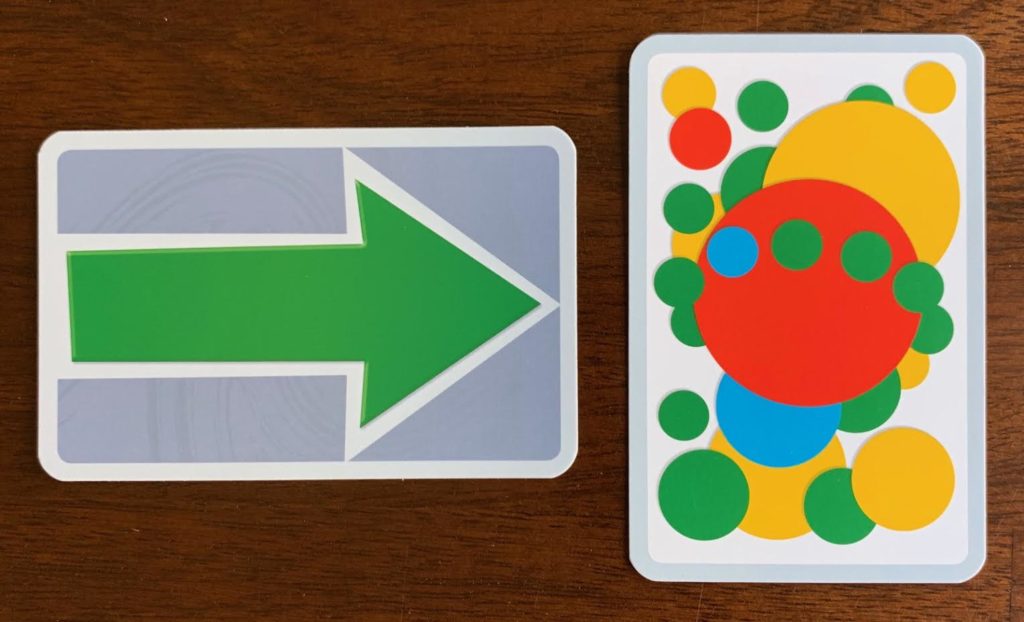 Since the arrow chosen is green, players are only interested in how much green is on the cards. The first player to take a turn draws the top card from the color deck and places it to the left or to the right of the existing card, depending upon whether they think it shows less green or more green, respectively.

Here, because the new card appears to show less green than the old one, it is placed to the left. As the arrow suggests, the amount of green should always increase from left to right. (Whether it actually does or not is a different story.)

Then, it’s the next player’s turn.

And so on and so on. Players continue drawing cards and placing them in what they believe to be the appropriate spot until someone issues a challenge. If a player suspects that a card is out of place – that is, if it looks like the card row does not consistently increase in the amount of the active color – they can turn all the cards over instead of adding a new one.

The back of every card shows the actual percentages of each color on it. The cards in this example were indeed placed correctly, since the percentage of green increases – 6%, 15%, 20%. (Occasionally, multiple cards will have the same percentage, which is fine, as long as they are next to each other.)

If the player’s challenge is correct, and the cards are in fact out of order, he/she earns the arrow card and a new round begins. Otherwise, if the challenge is incorrect, the arrow is given to the player who placed the last card.

The game ends when a player earns their 3rd arrow; that player wins immediately. Alternatively, players can choose to play 12 rounds, using every arrow, in which case the player with the most arrows at the end wins.

I have never played a Wolfgang Warsch game I didn’t enjoy, and Illusion is no exception. In his trademark design style, this game is very weird, but very cool. As I said in the beginning, I’m not even sure how to classify it. Illusion feels like part pattern recognition, part puzzle, and part visual perception. I guess it’s a blend of all 3. However you categorize it, though, it’s a lot of fun.

I am always on the lookout for games that are different from the rest, games that do things I haven’t seen before. With a track record that includes The Mind, The Quacks of Quedlinburg, Ganz Schön Clever, and Wavelength, Warsch just keeps pumping them out. Illusion is, once again, an entirely bizarre, yet entirely unique game.

The visuals on the cards are cool and eye-catching. When a bunch of them are side-by-side, they start to look like an abstract modern art piece. One definite downside to this game is that it’s not colorblind-friendly, but to be honest, I’m not even sure that it could be. Perhaps there is a different color palette that would have made it more accessible, but I don’t know for sure.

Still, I find this game oddly compelling. At first brush, Illusion might sound easy, but it can be very tricky to determine where a card fits in the row. Sometimes the amount of color only differs by 1%, so the longer the row gets, the sharper players’ eyes need to be.

There really shouldn’t be much mystery about whether Illusion is a game for you. Obviously, if you like optical illusions or games of visual perception, this one will be right up your alley. Even if you don’t have strong opinions about them, though, if you like trying games that are just… different, this is definitely one to check out.