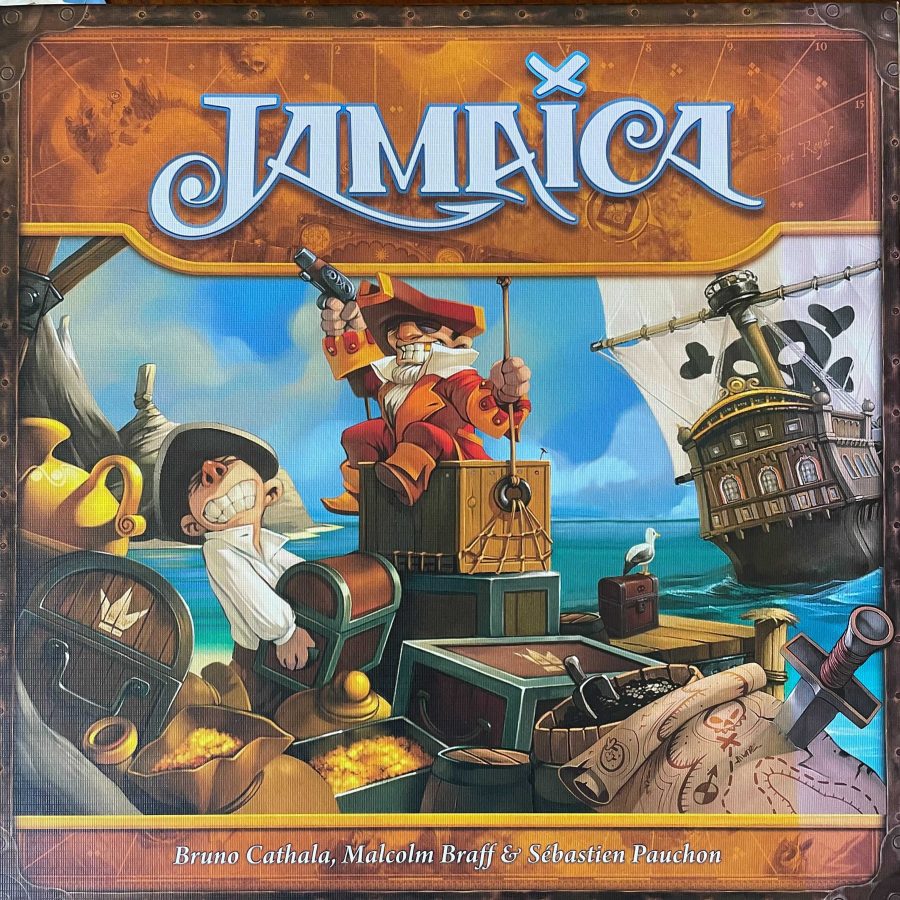 Jamaica is a family-friendly, pirate-themed racing game that puts players in charge of their own ship as everyone races to be the first and wealthest pirate to circumnavigate the island of Jamaica. The original was published in 2007, and now, in 2021, an updated version has been released! So all hands on deck, it’s time to race!

Even though it centers around piracy, Jamaica bills itself as family-friendly (8+). There is some light skull imagery in the map and some treasure cards, but nothing scary. The back of the rulebook highlights the real pirates’ stories that sometimes end violently or abruptly, but nothing is described or shown in gross detail. Also a small number of the treasure cards are “cursed”, which just means they are worth negative points at the end. Players can also attack each other and steal treasure or cargo.

I used to play games with my son when he was little, and either water down the rules or ignore most of them entirely so that he could have fun. We used to get out the Firefly board game from Gale Force Nine and have fun just racing around the outer planets. Jamaica reminded me of this initially, but it would be folly to write it off as a simple roll and move game. What starts off as a simple and friendly affair can turn cutthroat as quickly as a Nor’easter storm rolling in; in other words, Jamaica is deeper than it looks.

Players start with 3 food and 3 gold in their cargo holds – these resources are used to pay port fees (gold) and sea spaces (food). Gold is also accumulated along with treasure cards to increase players’ scores at the end of the game. The first player, ahem, captain, will roll both dice and set 1 as the morning (left) and 1 as the evening (right). The values of the dice correspond with whatever card each player chooses to play. If it has an arrow, they will move that far, and if it has a resource they will collect that much and store it in their holds. Each player takes their actions in turn, making sure to fully finish the morning action before moving on to the evening one. Any ships that end up in the same spot will also resolve combat before moving on, and the winner gets to either steal a hold’s worth of loot, a treasure card, or “gift” a cursed treasure card to the loser. Play continues until someone makes it back around to Port Royal, then the round finishes and points are counted up.

What I love the most about Jamaica (after its deceptively simple presentation) is the fact that almost never is someone totally out of the running. It can happen on occasion that a captain will get “stuck” playing a card they would rather not, but since everyone has at least 3 cards to choose from every round this is rare. In games with fewer players it’s easy to drift along and sail comfortably without any combat, so higher player counts are where Jamaica really shines. The chaos that ensues from having 4-6 ships packed into the lanes is a lot of fun, and it’s great that most of the treasure cards are earned by going on longer routes on the outside edge of the board, giving players a tempting choice. This is definitely a “don’t count your chickens ‘til they hatch” kind of a game, where even finishing first won’t guarantee you a win.

The 2 biggest changes I could see between this new printing and the original are the rulebook, and the box. The new box is more square, and isn’t made to look like a treasure chest. No big deal. The rulebook however… ah, mateys, this is a thing of beauty. It has tabs! Players can easily jump to whatever section they need to read up on! Publishers please take note. Finally, the copy I received also had a 7th “Ghost” ship, for use in the 2-player variant or if you wanted to use it instead of an original colored ship. Sadly there aren’t any cards to go with it, so if you were hoping to play as the Flying Dutchman you’ll have to just imagine it for now. But the action cards can still make a cool panoramic if you match up the art and the symbols in the corners, just like in the original.

Bottom line, there aren’t any significant changes to warrant buying Jamaica if you still have the original, but if you want an easy, thematic racing game with some strategy layered in you should definitely check it out. Or if you just want a good pirate game! Either way, Jamaica is an easy suggestion.

There aren’t any significant changes to warrant buying Jamaica if you still have the original, but if you want an easy, thematic racing game with some strategy layered in you should definitely check it out. Or if you just want a good pirate game! Either way, Jamaica is an easy suggestion.