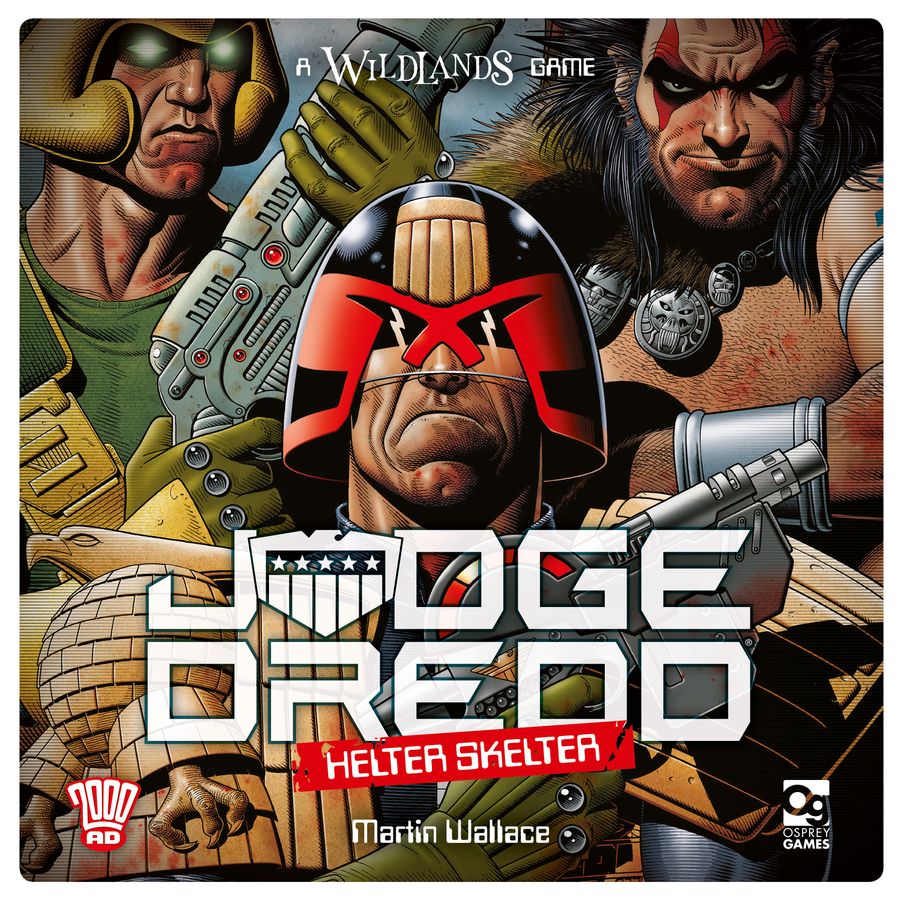 Judge Dredd: Helter Skelter is reworking of Martin Wallace’s popular game Wildlands. Set in the universe of 2000 AD, players take on the roles of British comic-book greats as they battle it out on the table. Read on to find out how it works!

In Judge Dredd: Helter Skelter, the universe has fractured and players are fighting to save reality. Each person plays as a team of characters from British comic series 2000 AD, with the goal of collecting reality fragments and knocking out opponents.

The cast of characters in the game includes:

Nikolai Dante and his swashbuckling crew…

Sláine MacRoth and his band of fierce warriors…

and of course, the legendary Judges of Mega-City One.

(along with Mean Machine Angel, for some reason.)

The game is played on a double-sided map board featuring locations from the Mega-City. At the start of the game, players choose a side to use: either the Hall of Justice or the Dan Tanna and Enid Blyton Blocks. Both maps are divided into 40 numbered spaces, and during setup, players use numbered cards to determine where their pieces – both their character figures and their reality fragments – will begin. 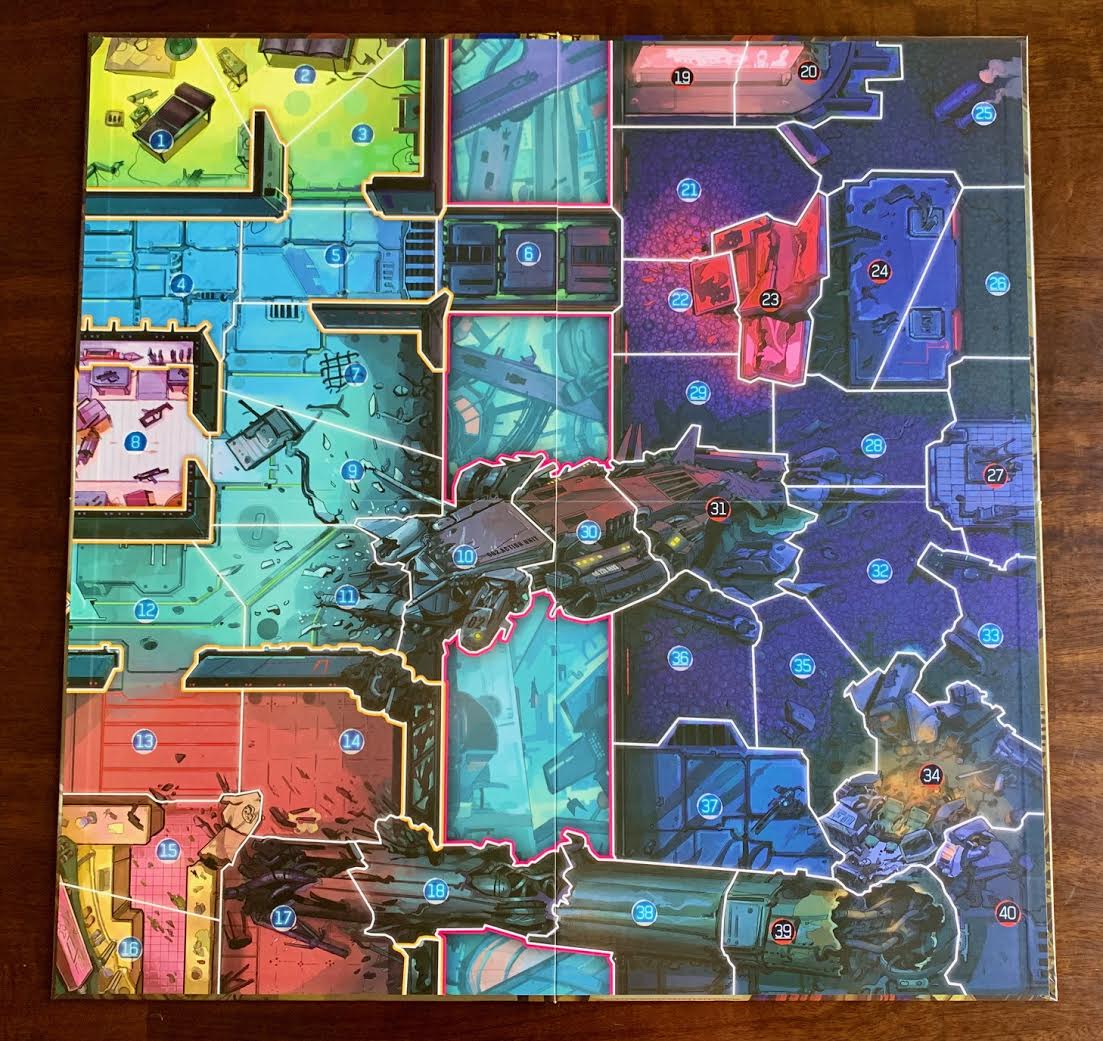 Each player has their own unique deck of action cards, and these are the primary driving force of the game. At the start of play, each player draws 7 cards from their deck to form their hand.

A sampling of action cards from the Judge Dredd deck.

The basic turn structure involves players deploying figures and using action cards. All character figures begin off the board, but their starting locations are predetermined, as mentioned above. Each turn, the active player begins by deploying a figure, if they have one available, to its starting space. (A player can deploy multiple figures in a single turn if they wish.)

Each figure has a numbered card that shows which space they begin on when deployed. The character cards also note HP and special powers, if applicable.

Then, the player can take any number of actions using the cards in their hand. Each card depicts 1 or more character icons and shows character-specific and/or wild actions. When a player spends cards with a character’s icon, that character can:

This being a skirmish game, players can also attack, of course. Attack actions are done using the symbols linked to the character icons. They include the combat mechanisms one would expect in a game like this: melee attacks, ranged attacks, teammate assists, heals, defensive bonuses for cover, etc. Because this is all fairly formulaic for the genre, and since we have already covered the original Wildlands on this site, I’m not going to go too in-depth about the specifics of combat, but suffice it to say it is a clean system that will feel familiar to anyone who has played a skirmish game before. 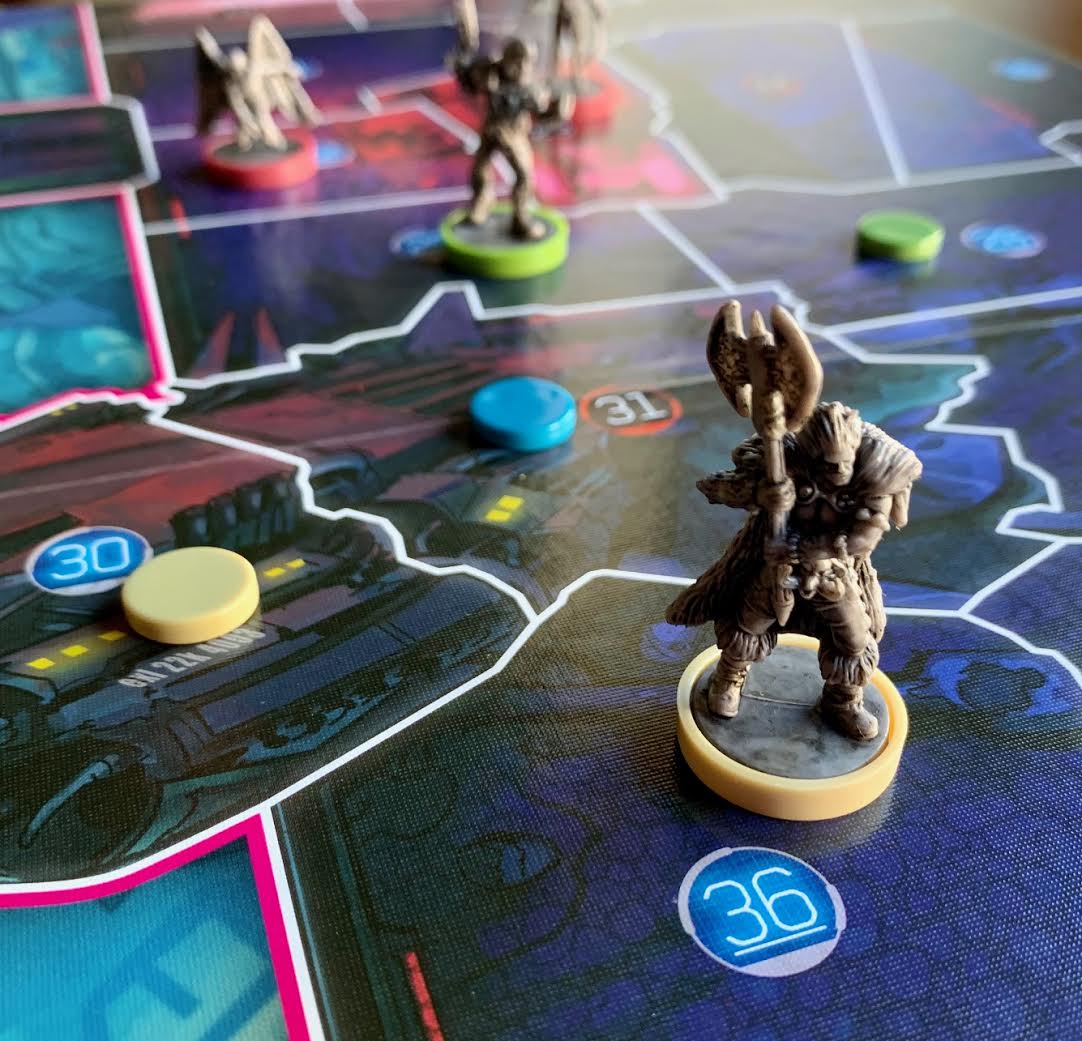 Sláine could go grab that reality fragment… or he could go wallop Johnny Alpha with Brainbiter, his trusty axe. Decisions, decisions…

While many games in this style would handle combat using dice, Judge Dredd does it all with card-play. Offensive actions, defensive actions, interrupt actions – all card-based. This makes cards a valuable resource for every aspect of the game, and since players only draw 3 cards at the end of each turn, they have to think carefully about how and when to spend them.

For more variety, players can also add in the Dark Judges expansion (sold separately), which adds a 5th faction: the titular evil judges from Deadworld.

The Dark Judges expansion is cool, not only because it opens the door for a player to yell “GAZE INTO THE FIST OF DREDD!” as he clocks Judge Fear, but also because it includes rules for solo play. The Dark Judges are some of the most well-loved baddies in comics history (definitely Top 3 for me), so for fans of Judge Dredd/2000 AD, this expansion seems like a no-brainer. It provides extra variability and adds in some of the best comic characters out there.

As a huge fan of the Judge Dredd comics, I was very pleased with the way this game adapted the 2000 AD theme. Each faction in the game feels unique and has its own play-style; trying them all out provides room for strategic exploration.

Now, I have to be honest: Martin Wallace is one of my least favorite designers out there. Of the 6 or 7 games I have played from him (Wildlands not being among them), I have never liked a single one before. I am thrilled to say that at long last, I have finally found a Martin Wallace game I enjoy. Judge Dredd: Helter Skelter is a great time. (And this makes me think I would really enjoy Wildlands as well.)

While I would typically describe Wallace’s design style as “bloated and overwrought, with a heaping helping of boring,” Judge Dredd is easy to learn, quick to play, and punchy all the way through. Even if the theme were ignored, this game would still be a fun tactical romp. The 2000 AD flavor just elevates it even more for those who know and love the characters.

Production-wise, this game looks very nice. The stars of the show, of course, are the 20 ink-washed miniatures. Though some folks might want to paint theirs, I actually like the grayscale color; it reminds me of the black-and-white comic pages from which these characters came. The box insert works very well, with designated slots for cards, figures, and other bits. However, I was disappointed to see that it leaves no room for expansion materials. Had the insert been designed a bit more thoughtfully, it might have been easier to consolidate extra content into the base game box. This is a minor gripe, to be sure, but it seems worth mentioning. All in all, though, the game looks fantastic.

Since I understand that Wildlands and Judge Dredd: Helter Skelter are very similar in terms of gameplay, I have no reservations about recommending either of them. As far as which one to choose, I think it depends upon your desired theme, whether you want straight fantasy or comic book action. Whichever you choose, though, you’re in for a ton of fun.

(And here’s hoping that someday, they release an expansion with Judge Fish!)

Judge Dredd: Helter Skelter does a great job bringing the universe of 2000 AD to life. Fans of miniatures games and/or 2000 AD comics will definitely want to check it out.