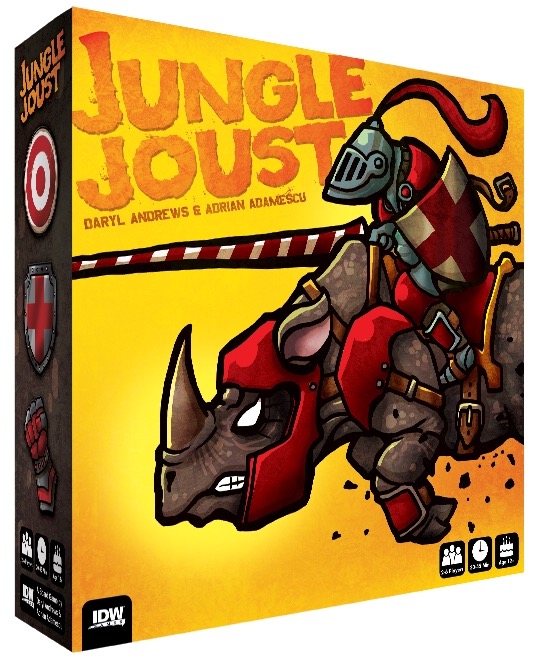 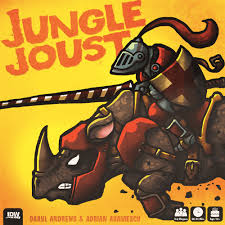 Jungle Joust is a new title from IDW Games, featuring hand management and card play mechanisms underneath a theme of rhino jousting.

Daryl Andrews and Adrian Adamescu made a major splash in the board game scene with their 2017 hit, Sagrada. (Please excuse me while I swoon over how amazing this game is.) Itching to see what else these designers had to offer, I was ecstatic to try their newest game, Jungle Joust.

This is a game about knights jousting on the backs of rhinos (read that again). In Jungle Joust, players bet on the outcomes of three clashes, with the goal of having the most money at the end. The lance-wielding competitors are not controlled by any one person, but are instead moved and manipulated by all players.

At the start of the game, the rhinos are placed at opposite ends of the board, eight spaces away from the center line. In typical medieval jousting fashion, a barrier divides their two sides. Players each receive a hand of two cards and a token indicating which rhino they want to win. The cards are unique, each bearing a different combination of the game’s icons.

On a player’s turn, she plays cards into a staggered column to move the contestants. Cards may be played on either jouster’s side, but must always have at least one icon that matches the card before it in the column. For the sake of playing the first card, all of the main symbols are pre-printed on the board, so it is easy to match with them. 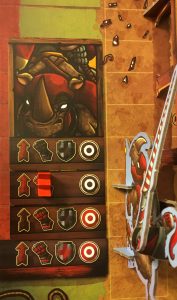 Every time a card is played, the corresponding rhino is moved one space. If three matching, non-movement symbols are ever played in a row, a favor token is placed on the third card in the series (see photo to right). This will boost that side’s overall performance. Favor tokens come in two colors, matching the two rhinos, but either color may appear on either side. This means a red token can be placed on the black or the red side, but favor tokens matching a side’s color are better. When a favor token is placed, the current player may take an immediate special action.

Once a player has added one or more cards to the board, moved rhinos accordingly, and taken applicable favor actions, she may bet on the outcome of the joust. There are two ways to do this:

After the player has placed her desired bets, she ends her turn by drawing either one face-up card from the two available, or two face-down cards from the deck. 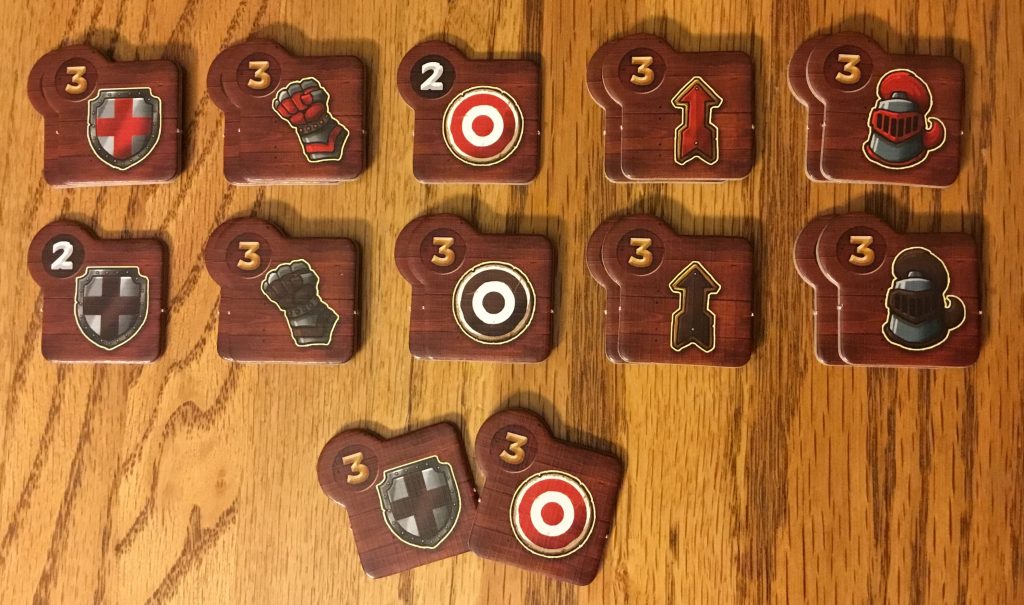 As cards get played, the rhinos move down the tracks toward each other. When they are in adjacent spaces, a clash occurs, ending the round. There are multiple scoring phases, which work as follows:

After three rounds, the player with the most points is the winner. 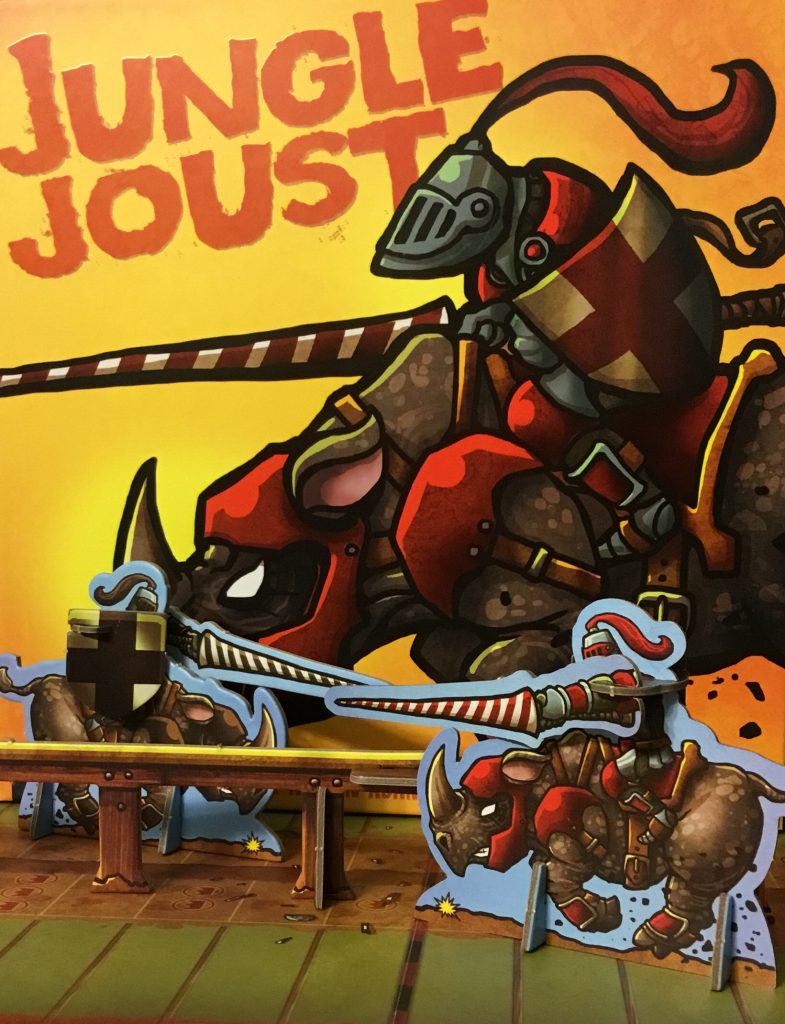 I wanted to like Jungle Joust, but this game didn’t do it for me. It’s a shame, because it has great production quality, an inviting table presence, and an awesome theme; it just feels too convoluted for what it is.

The “point-salad” scoring system is a bit fiddly. If you found my description of the scoring to be confusing, that’s because there is kind of a lot to it. (Or possibly because I’m a bad writer.) It’s critically important for everyone to understand how scoring works so they can strategize accordingly, but, even as an experienced gamer, it was challenging for me to keep everything straight. There’s nothing wrong with multi-faceted scoring in games, but it just doesn’t seem necessary here. I didn’t feel that it enhanced the overall experience or offered enough strategic choices to warrant it.

One thing I really did like was the card play. Since cards can move either rhino, the game presents players with opportunities to help or hinder either side. If one jouster is close to earning a favor token, a player may wish to lay down the “wrong” cards to prevent this. It’s not overly mean, but there is a subtle level of indirect interaction.

If Jungle Joust‘s game system was more streamlined, I think I would have enjoyed it more. To draw a comparison to a better-known title, this game reminded me of a more complex Camel Up. If this sounds like something you’d like, I encourage you to demo it at your local game store!

A review copy was provided by IDW Games.

Jungle Joust could have been a great game, but it struggles due to a clunky, overly-complex scoring system.