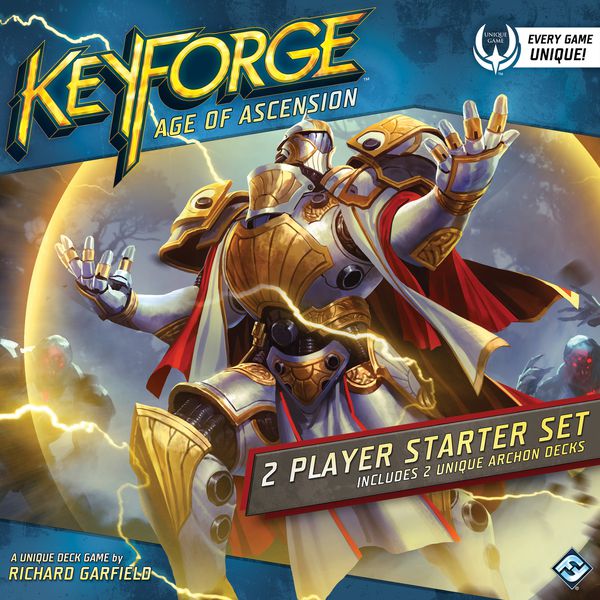 In 2018, Fantasy Flight Games released KeyForge: Call of the Archons which let players duke it out with unique pre-made decks in a far-flung fantasy setting. Age of Ascension is a fully compatible follow-up—not a sequel or add-on—and adds over 200 new cards into the KeyForge lineup that will work with the cards already in play. This two-player set also comes with tokens, playmats, and two unique decks that will let players jump into the KeyForge universe.

*Disclaimer: every single deck in KeyForge is unique, and there is no way to tell which three factions you’ll get when you buy one. The set I reviewed had two decks with 5 of the 7 factions, but gave me a good feel for what one might expect in the other two factions that I haven’t seen.

Cards representing artifacts and creatures can be purged, destroyed, defeated, stunned, and attacked. No blood or gore is shown.

Some of the factions use casters, witches, demons, and imps. Others use Paladin-like abilities like healing.

KeyForge pits two players’ decks against each other in a bid to be the first to forge 3 keys. The first to do so opens the vault and wins the game. Players forge keys by gaining Æmber via cards and abilities; if you have 6 Æmber at the start of your turn, you can forge a key. On a player’s turn, he selects one of the three factions at his disposal and may play, discard, activate, and attack with that faction only (there are rare cards that are exceptions to this rule). So instead of having mana or power levels like in Hearthstone or Star Realms, players can play as many or few cards as they like depending on what’s available and their current strategy. 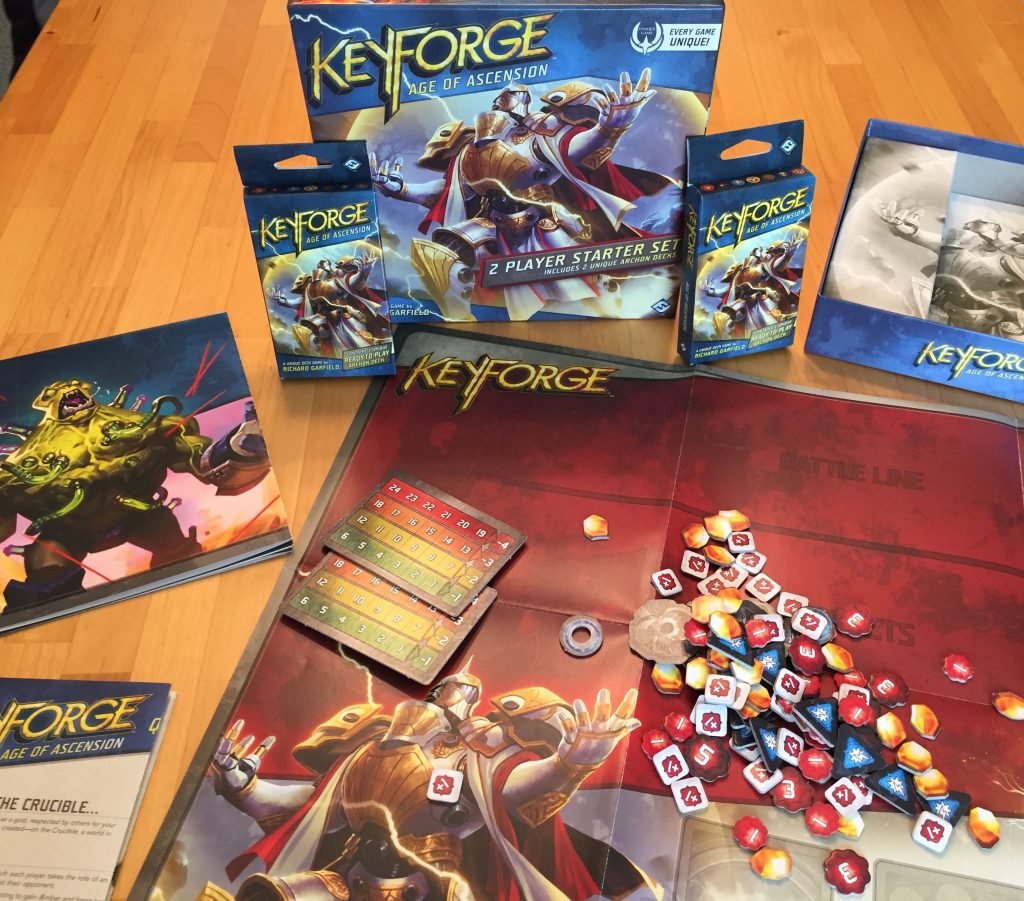 The set comes with everything you see here (2nd blue playmat is folded).

Each faction (or House) feels different in their art and abilities. They aren’t just palette-swaps or different art hiding generic cards. Brobnar seem like they’d be right at home in a Thor comic or movie, featuring stout characters and giants that excel at pounding on enemies. Logos feels like they belong to a Netrunner game, with lots of robots, tech, and card movement via archiving and discarding. House Dis uses casters and magic to disrupt their enemies and steal Æmber, and House Sanctum feels like a group of Paladins taken right off the streets of Stormwind in World of Warcraft.

As much as I will praise the art direction and characterization of each house, I unfortunately also take issue with the lack of theme in Keyforge. You’re fighting another Archon, who’s in charge of three factions, to try and gain Æmber, to forge keys, to open a vault. Okay. 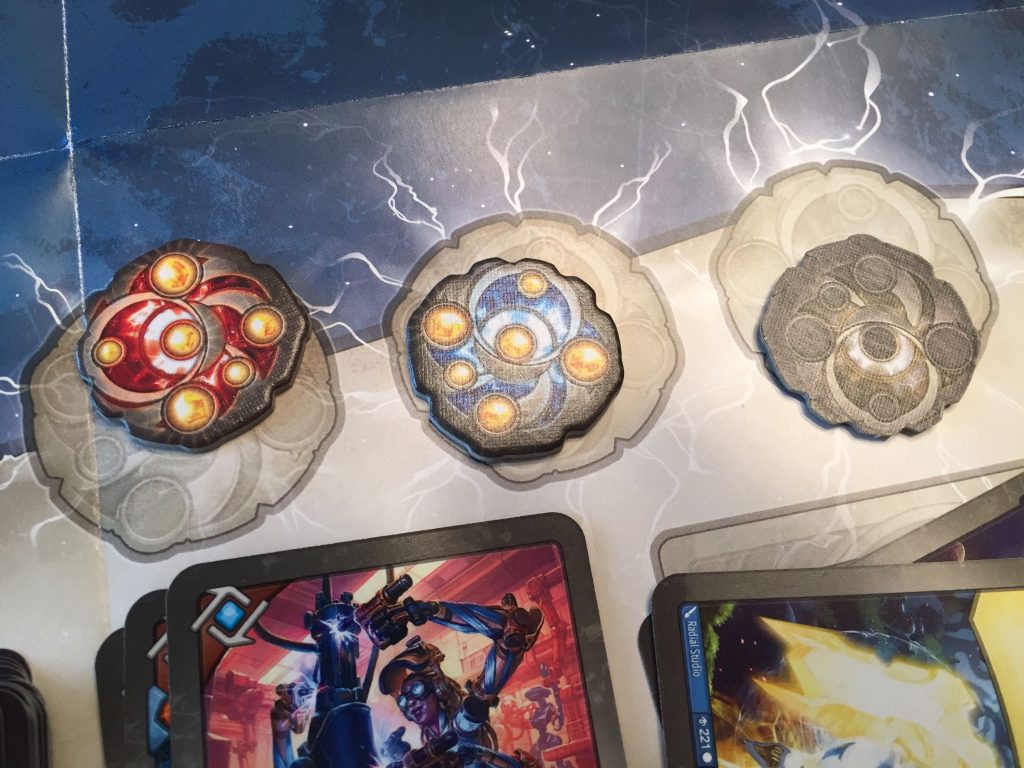 What’s in the Vault? Why are the factions banding together (in groups of three)? Why does it take three keys, other than from a gameplay standpoint? Why is it called Æmber and not Amber or Ember (You make me use a special character just to write the review, you get the fun question)?

It’s also a bit of a catch-22 with making every single deck unique and unchangeable. It eliminates the secondary card market like you see with Magic: The Gathering, but instead some players will still buy multiple decks, or go on to eBay, trying to find that “one killer deck.” Another interesting problem that Fantasy Flight ran into with their computer-generated names is that some of them in the first edition ended up a little…off. Some were even deemed inappropriate enough to be banned in circuit play, but to FFG’s credit, they offered two replacement decks for one of the oddly named ones. 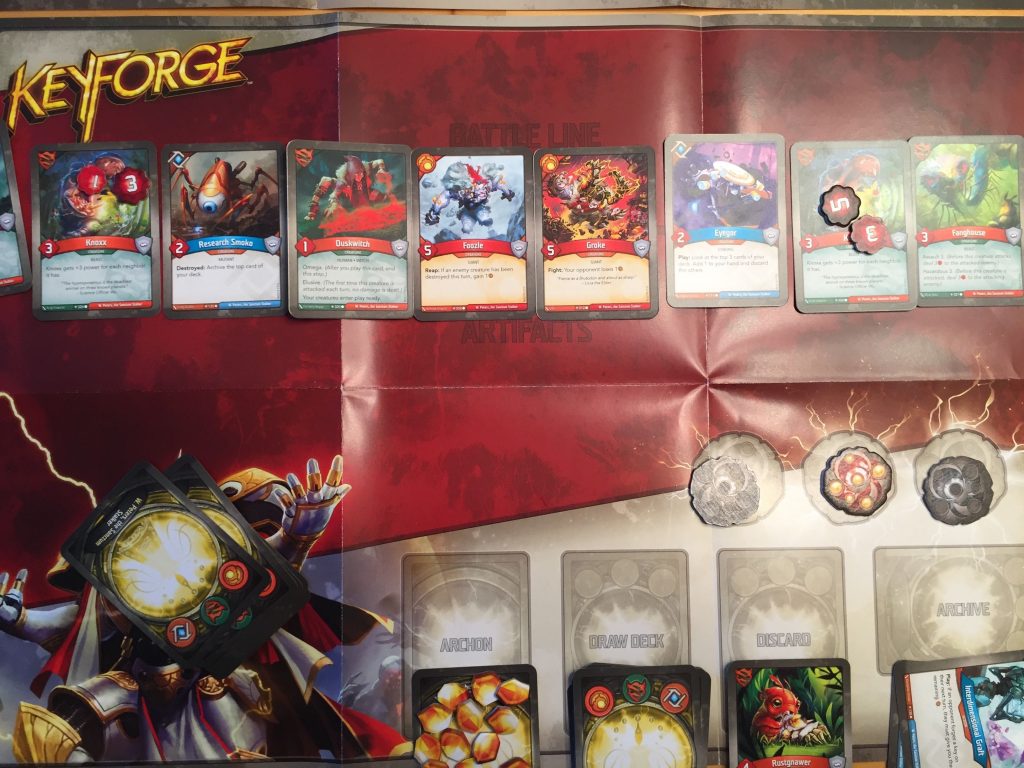 Close-up of the battle mat, with all the cards shifted down so you can see where they go.

And since each deck is wildly different, it will take several plays to get used to cards and how they interact with each other. The thin quick-start guide in the Ascension set is a good jump-off point but didn’t answer all of my questions. You have to go online to get the full rules and explanations.

If the “why” doesn’t matter to you as much as the “fight!” then Age of Ascension is a great point to jump in on the KeyForge universe. It seems like Fantasy Flight is doing a good job of improving and refining the game, and by doubling the available cards, they’ve made it so decks will feel and play even more like unique sets. If you’re in the market for a two-player set, it’s fairly priced (seeing how single decks go for around $9.99) and worth checking out. 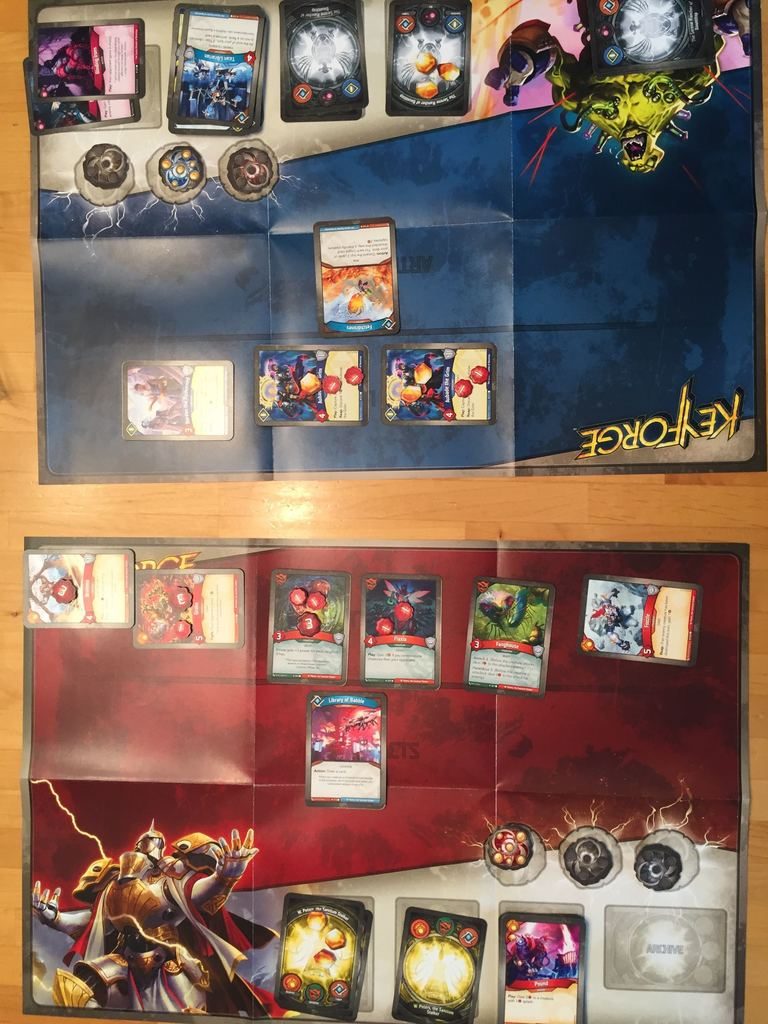 A decent starter set for a good game that could use a little more theme, Keyforge: Age of Ascension gives you everything you need for two people to start playing. Based on how much you enjoy it you could add more decks to your collection, or just stop and play with what's in the box.