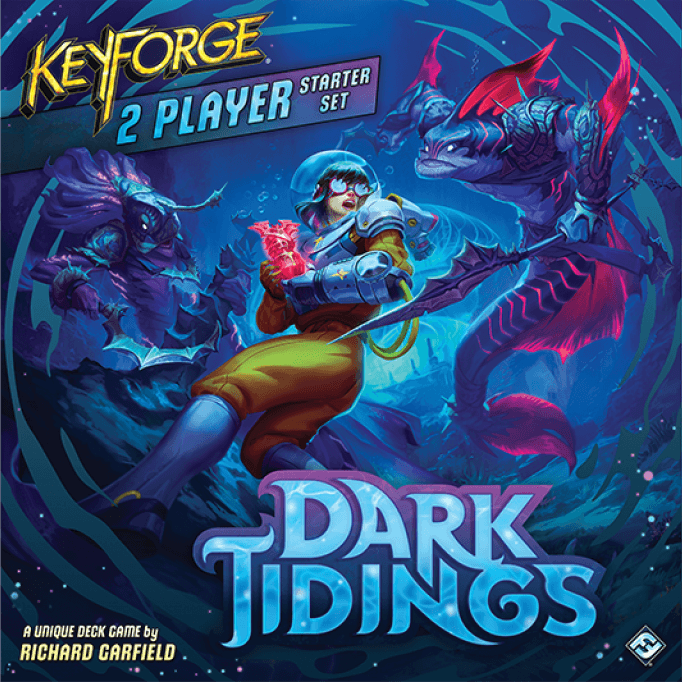 KeyForge: Dark Tidings marks the 5th release in the popular KeyForge line, and with it comes a new house, new decks, and new mechanics. Players will face off against the new Unfathomable house, which replaces House Dis (something I rallied for in my last KeyForge review). Also, many cards will potentially be affected by the changing tide – a card added to the middle of play that can add abilities to certain cards. Does it keep things fresh or is this catch of the day washed up on shore? Read on for the review!

Cards can be used to attack, defeat, destroy, ward, enrage, and purge other cards, but no blood or gore is shown. Characters take damage in the form of tokens.

Some of the houses use magic to attack, protect, summon, heal, and conjure for their side. Some houses use witches, demons, and imps, while others use “good” magic like paladins.

It can’t be easy to come up with new and exciting things to add to a 3-year old “Unique Deck” fantasy card game. Dark Tidings follows a similar formula from the previous release, Mass Mutation. It adds a new house,  Unfathomable (more on them later), of which I did get 1 deck. It also adds a new High tide/Low tide mechanism, where certain cards have abilities that can be triggered once the tide is in play (but I didn’t get any cards that can make it in play). Once a tide has been established as High or Low, players can do things to change its orientation, but if they have a deck that doesn’t let them put it into use they are either at the mercy of their opponent or just out of luck. 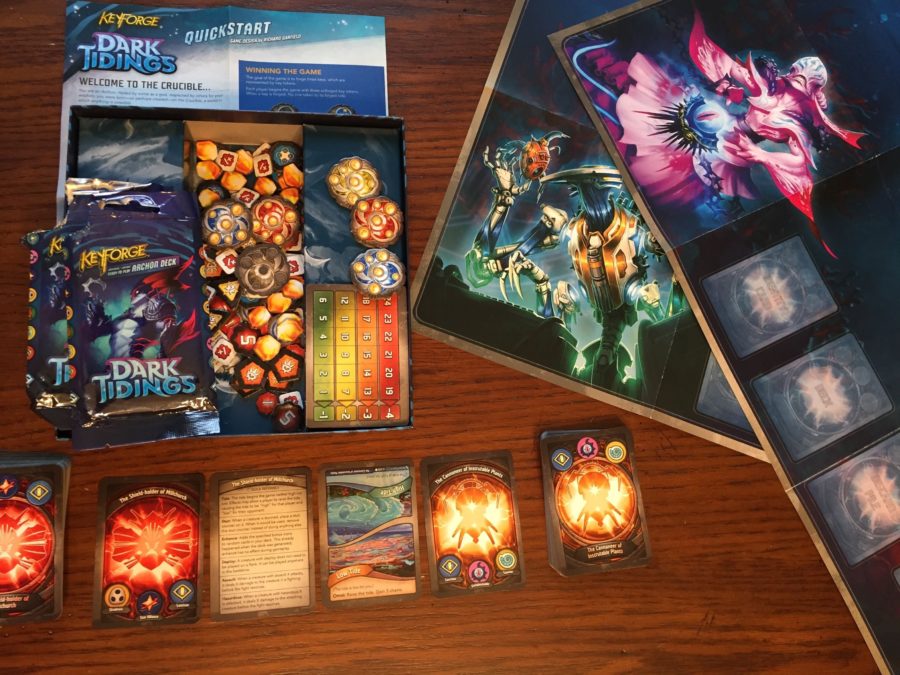 The box includes everything seen here.

Another change that reminded me of Mass Mutation (which included “mutated” versions of cards with new art) is that some decks in Dark Tidings are “evil twin” decks with different art and dark backgrounds. While I’m sure there exist some die-hard KeyForge fans who will leap at the chance to get these, this is “meh” from me. New houses and cards are a lot more of a draw to me than alternate art or swapped backgrounds. I also would have preferred if at least one deck in each 2-player set had a new house when one was introduced, or at least guaranteed that everyone had access to a new mechanic.

I luckily did get a deck that included the Unfathomable house. I am happy to report that the Unfathomable replaced House Dis, my least favorite due to their reliance on demons and evil-looking magic. (This is not to say that games can’t have evil or magic in them, but it felt out of place compared to the rest of the Houses.) Mechanistically, Unfathomable does  a good job of exhausting their opponent’s creatures, making it impossible to fight or reap with them on their next turn.

Luck of the draw aside, I still have a couple problems that will effect anyone playing Dark Tidings. First, there still are not enough Æmber tokens to go around with all the capturing, stealing, and acquiring that is required in an average match. This isn’t new, but I had to again substitute a different token until some Æmber was freed up by a Key getting purchased in a later round (also, I still hate having to type “Æmber”). Another problem is that the decks (at least in the 2-player set) now come in flimsy foil packs, which also make it harder to box everything back up and put away. The previous releases all gave you a nice cardboard sleeve capable of holding the entire deck, and protecting it when not in use. 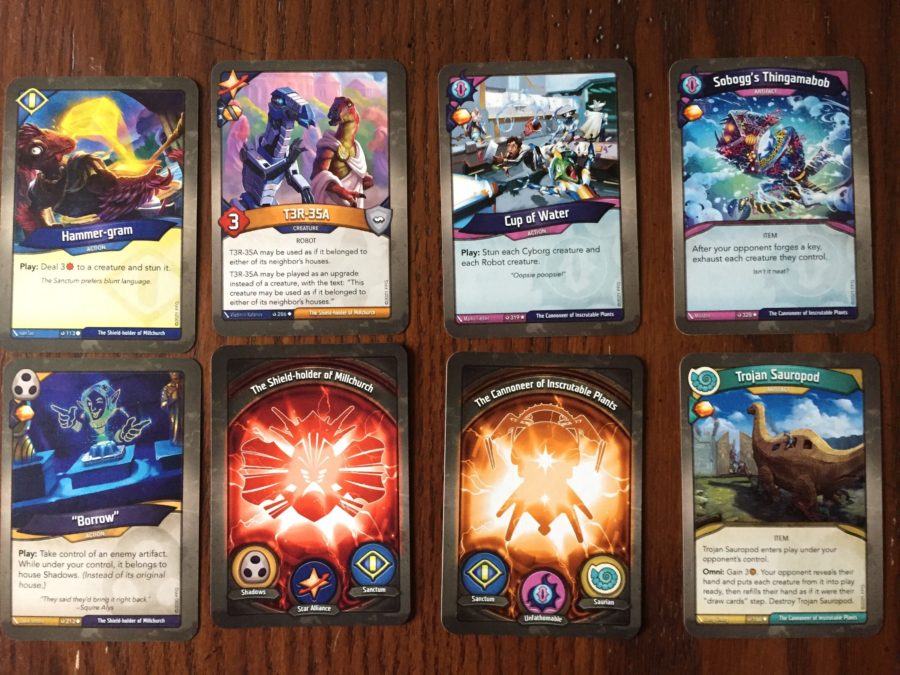 Some of the more memorable cards that came in my set.

So it’s another KeyForge, and for better or worse the formula hasn’t changed. There is new content, but no guarantee that you’ll get any of it. You could end up with a weird or worthless deck, or something overpowered, or in-between. Chances are, though, that due to power creep even a weird deck missing some new stuff will be more powerful than a deck from one of the past releases, especially one of the earliest versions. Dark Tidings isn’t bad, but if KeyForge is going to try to stick around for another 3 years I truly hope that there is more in store for the next release. I wouldn’t label this release as “necessary.” If you have a past set and you like it then keep playing that. Just know that it may not be as powerful as some of the new ones you may encounter.

New KeyForge releases are starting to feel a little rote; there is new content added but there is no guarantee you will get any of it in your decks.