Oh no - there goes Tokyo 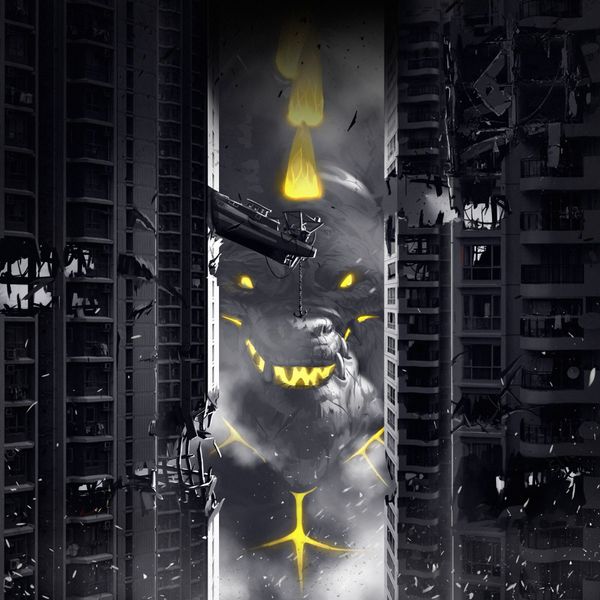 King of Tokyo launched in 2011 and has been constantly supplied by promos and additional monster packs – it even made our Evergreen Games list. It’s appeal is easy to understand; an easy game to pick up and play, with the theme of giant monsters duking it out in Tokyo. When IELLO announced King of Tokyo – Dark Edition, I was intrigued. What new twists or additions could they have in store for this new classic? Read on!

The game involves monsters fighting, but it’s all done with dice. A few of the cards might give some younger players pause, but most of it is done in jest or cartoony enough that I wouldn’t have a problem with kids playing it. The most near-offensive cards I could see were: High Altitude Bombing, Eater of the Dead, Herd Culler, and Zombify.

In the original King of Tokyo, players controlled different giant monsters in a mash-up that could be described as Yahtzee meets Godzilla. The central mechanism is dice-rolling. Players take turns rolling a handful of them, trying to either match trios of numbers to earn victory points, gain energy and/or health, or cause damage to the other characters. Energy is spent on powerups, and health can’t be gained by players inside Tokyo. Players using a die with an attack result will hit others based on their own location – if they’re outside Tokyo, they hit the one (or two in a 5-6 player game) monster inside the city. If they themselves are in town, they hit all the monsters outside of the city limits. The first monster to 20 victory points or last monster standing wins. 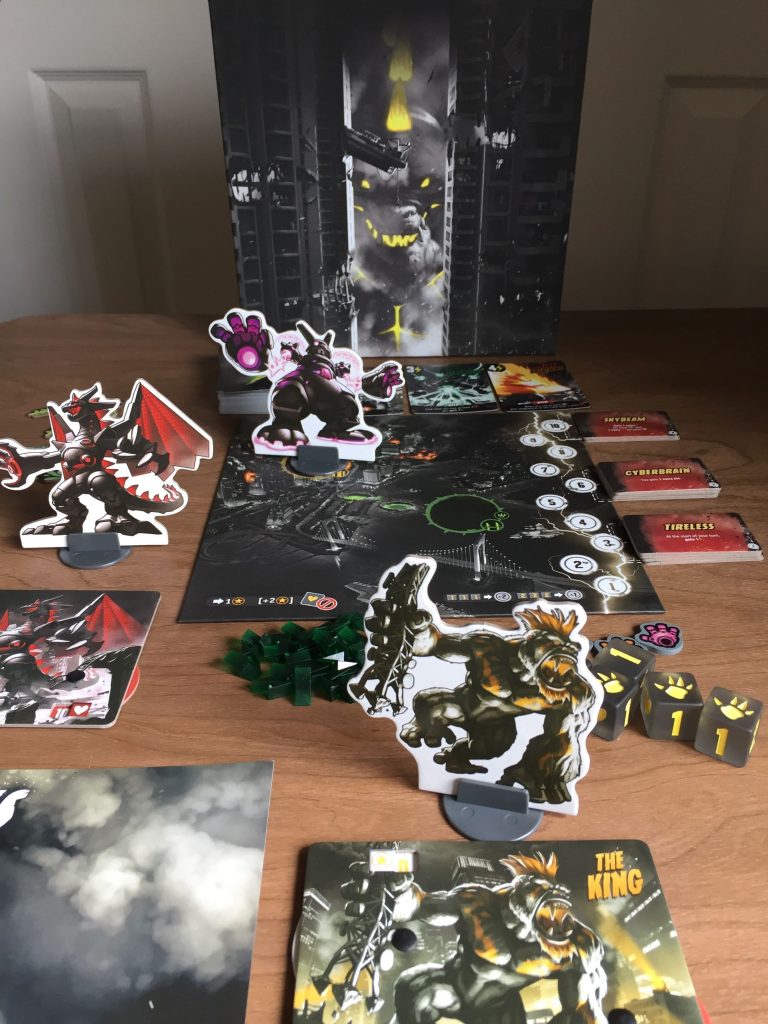 King of Tokyo: Dark Edition (KoT:DE) doesn’t deviate much from the original’s formula, but it updates the art and components and adds a “Wickedness” track. 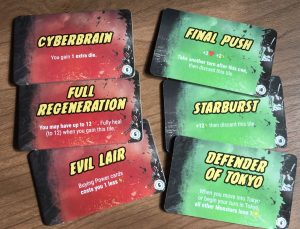 A sample of Wickedness upgrades.

Numbered 1-10, players gain “Wickedness” by rolling their usual trios of numbers, but triple 3’s get you nothing but the usual victory points. Triple 2’s earns you one point, and triple 1’s gets you two wicked points. At 3, 6, and 10 on the track, there are upgrades similar to what you can buy from the powers deck but in many cases they’re even better. They also are double sided, increasing the replay factor as you can use the red or green side, or mix and match. There are only four upgrades at the first two stops on the wicked track, and only two at the top.

Some of the powers cards I recognize from the original game, but some are brand new. There are even a few that require the use of extra tokens like the shrink ray or smoke cloud. Players will enjoy upgraded energy tokens shaped like lightning bolts (as opposed to the original green cubes), and parts of the board have a special sheen added to them. In addition, the dice are now opaque and smoky. They also tweaked the art assets, so instead of the cartoony colorful characters in the original, all of the monsters have a heavy dose of black, and one specific color for their palette. This was one change I actually wasn’t thrilled with since the original monsters were so great to look at and had wonderful table presence; however I understand that the change is in line with KoT:DE’s theme. 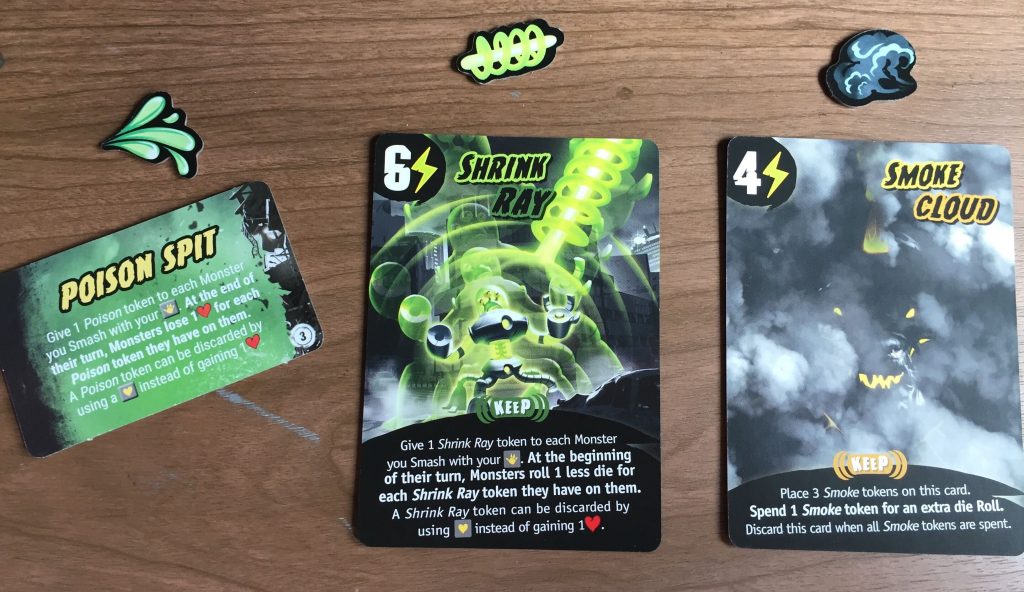 The biggest change is the Wickedness track making rolling 1’s a good thing. Games might take a little longer, but by mid-game there’s a lot more engine-building than I expected. Get the right power cards and wicked upgrades, and you may find yourself able to hunker down inside Tokyo for far longer than you expected. It also feels like there are more options for gaining extra dice or additional rerolls in this edition. Since the game is mostly dice-reliant, you can try different strategies but you’re still at the mercy of the dice – a boon to new or younger players, but perhaps a scourge if you’re old and grumpy. Even in this “Dark” version, KoT is a light game. 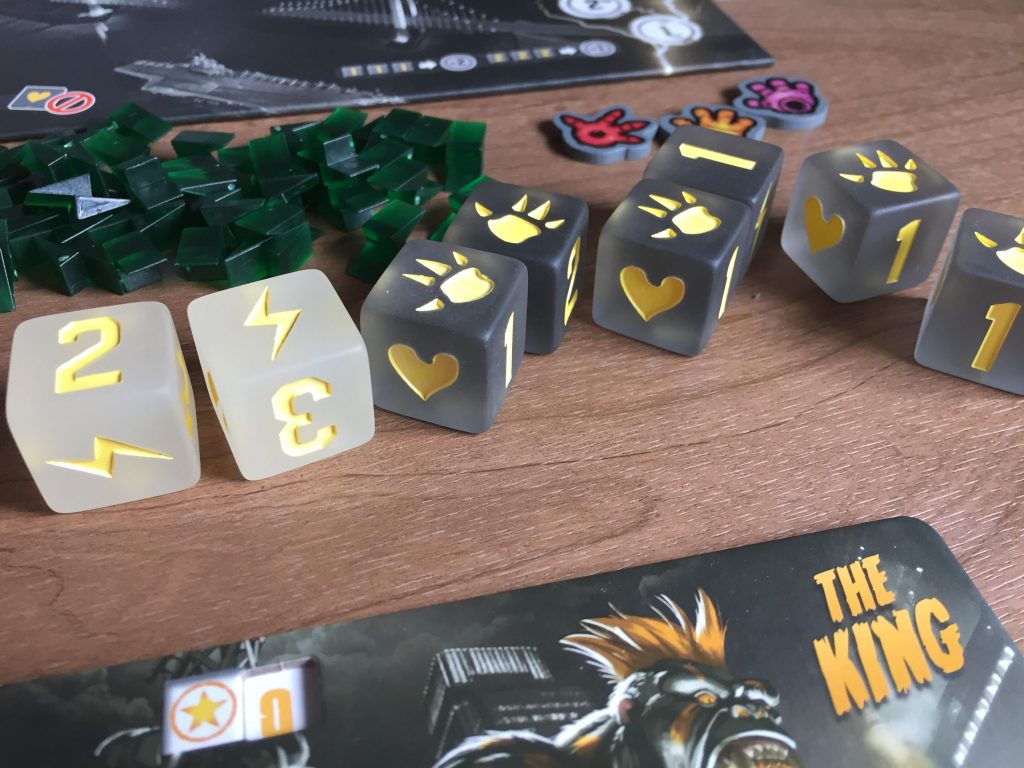 The game play is as solid as ever, but I’m struggling to find the audience for this version. Not enough is different for me to say you need to run out and get it if you have a bunch of monsters and expansions for the original game, unless you approach tabletop games like Pokemon, with a “gotta catch em all” attitude. But I’m also not sure I’d point someone at this game for their introduction to the series, as the dark theme just has far less table appeal. The best I can come up with is someone who’s played the original a few times but never picked it up would really like this game. 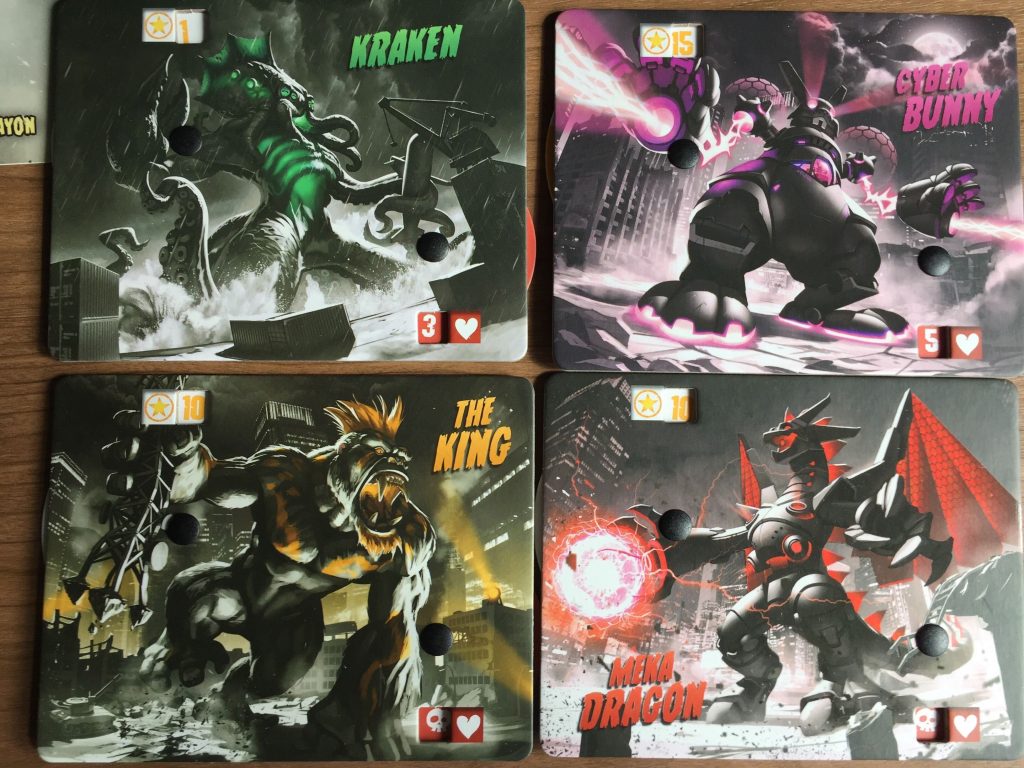 I’m stuck on the dark and edgy take on KoT because it goes in the opposite direction of what the game is all about: big silly monsters duking it out in a city. And KoT:DE doesn’t change that at all, it just ran up to it’s room, slammed the door, and put on some thick eyeliner and a faux-leather jacket. But it’s still wearing a Care Bears shirt underneath, so it’s hard to take seriously. I wish they would have gone the complete opposite way, and taken the fight to some alien planet where the gravity is weird, or the monsters become super-powered because it’s a different-colored sun, or they all finally get variable powers so choosing a character feels more important than color choice. There’s a lot of directions they could have gone but, “less colorful, upgraded components, and a wicked track” feels 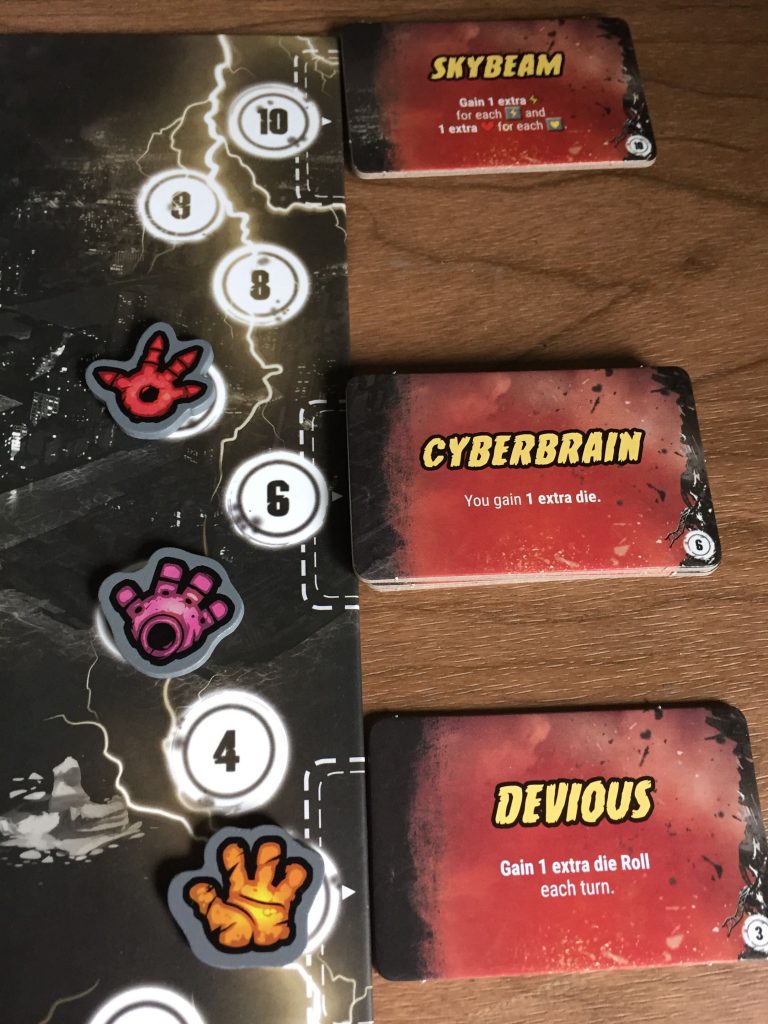 In the end, I really like that King of Tokyo: Dark Edition added the Wickedness mechanic, and therefore made 1’s a good number to roll again. However I’m not entirely sure that I would run out and buy it if you have the original game, as it isn’t different enough to warrant the purchase. I’m also not 100% sold on the dark & edgy color theme, but the game play itself works.

I really like that KoT - Dark Edition added the Wickedness mechanic, and therefore made 1's a good number to roll again. However I'm not entirely sure that I would run out and buy it if you have the original game, as it isn't different enough to warrant the purchase. I'm also not 100% sold on the dark & edgy color theme, but the game play itself works.