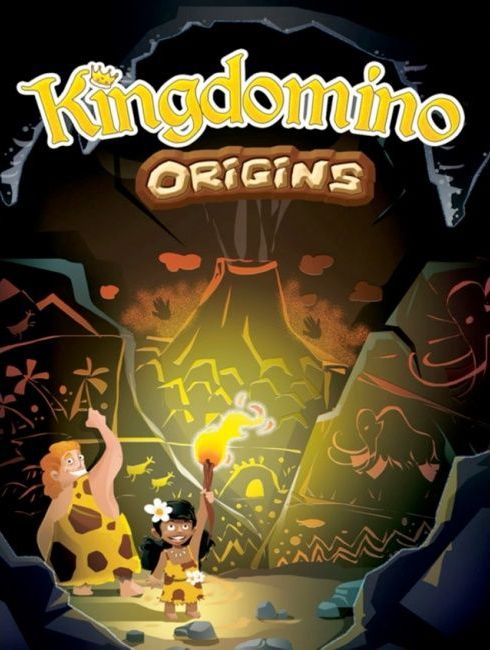 Kingdomino Origins is the latest entry in the extremely popular Kingdomino series. In this game, players journey back to prehistoric times as they try to build the best territory for their tribe. Keeping the spirit of the original game, Origins adds some new ideas to the mix. Let’s see how it compares!

In this game, 2-4 players compete to earn the most points. The core of the game will be familiar to anyone who has played a Kingdomino title—draft tiles, build a tableau of various land types, and secure those sweet, sweet multipliers.

Kingdomino Origins features 3 game modes for players to choose from. The first, “Discovery Mode,” is essentially the original Kingdomino, with the added mechanism of volcanoes. A number of tiles show a volcano with 1, 2, or 3 craters. Volcanoes themselves are not worth any points, but they increase the value of nearby terrain. When placed, a volcano launches flames, which are the game’s multiplier (the equivalent of crowns from the base game).

Flame tokens must be placed on empty spaces, and at the end of the game, they count toward the multiplier in their terrain.

The second game option, “Totem Mode,” builds on Discovery Mode by adding a majorities mechanism. 4 of the terrain types receive wooden resources tokens when revealed: mammoths in the grassland, fish in the lakes, mushrooms in the jungle, and flint in the quarry. When a player claims a tile with resources, those resources remain on that tile until the end of the game, unless destroyed by a fire token. If a fire is placed on a square with a resource, the resource is removed.

As players collect resources, if someone secures a majority in their tableau (e.g. more fish than any other player), that player claims the corresponding totem tile. They keep this tile unless another player overtakes their majority, in which case the tile is passed to that player. At the end of the game, totem tiles are worth their listed value (3-6 points), and each remaining resource is worth 1 point.

The third game option, “Tribe Mode,” expands the strategy even further. It uses the rules for volcanoes and resource and adds cavemen tiles. Placed on a central display, cavemen give players an extra decision on their turns.

After placing a domino and drafting another, a player may choose to recruit a caveman. To do this, they can either spend 2 different resources to take a face-up caveman or 1 of each resource to take a caveman of their choice from the stack. Either way, the chosen caveman is placed onto the player’s tableau in an empty, non-fire square of their choice.

There are 2 types of cavemen, and both provide scoring opportunities. Hunter-gatherers score based on the 8 squares around them (e.g. 4 points per remaining mushroom, 2 points per caveman tile, etc.), and warriors score in groups, much like terrain tiles themselves (i.e. the total strength of a connected group times the number of warriors in the group). Cavemen can be destroyed by fire, so players need to consider that when placing them.

Whatever game mode players chose, the game ends when the last dominoes have been placed. At that time, the player with the most points wins!

Kingdomino Origins is, in my opinion, the best entry in the series so far. This is because of its versatility—players can choose how they want to play, which gives the game a broad appeal.

I know people who don’t care for the original Kingdomino because they feel it is too light. For those people, Origins expands upon the base game with additional mechanisms and deeper decisions. Likewise, I know people who don’t care for Queendomino because they feel that it bloats the simplicity that made the original so great. For those people, Origins allows for classic Kingdomino gameplay, but also offers other modes without a great deal of extra rules overhead. In this way, Origins is like the Goldilocks’ porridge of the Kingdomino line: not too simple, not too complex, but just right.

The production of Origins is on par with other entries in the Kingdomino line, with durable tiles, well-written rules, and a helpful box insert. I really like that the wooden bits are screen-printed in this version; totally unnecessary, but a great touch. Like its predecessors, Origins should hold up well to repeated plays.

A question that will undoubtedly be asked is “If I have King/Queendomino, do I need Origins too?” To that, I would say “It depends.” Again, this game falls somewhere in between King and Queendomino in terms of complexity. Compared to the rest of the series, it feels the most like Kingdomino with the Age of Giants expansion—still simple and clean, but with a little something extra. If variability is what you’re looking for, then this is definitely one to check out. It’s the most customizable of the entire series. (And for folks brand new to this line of games, Origins is a great starting point.)

I am very impressed with Kingdomino Origins. If you love this series like we do at Geeks Under Grace, give this one a try.

Kingdomino Origins is my favorite entry so far in the series. Highly recommended for newcomers and folks who like the base game but want a slightly deeper/more variable experience.