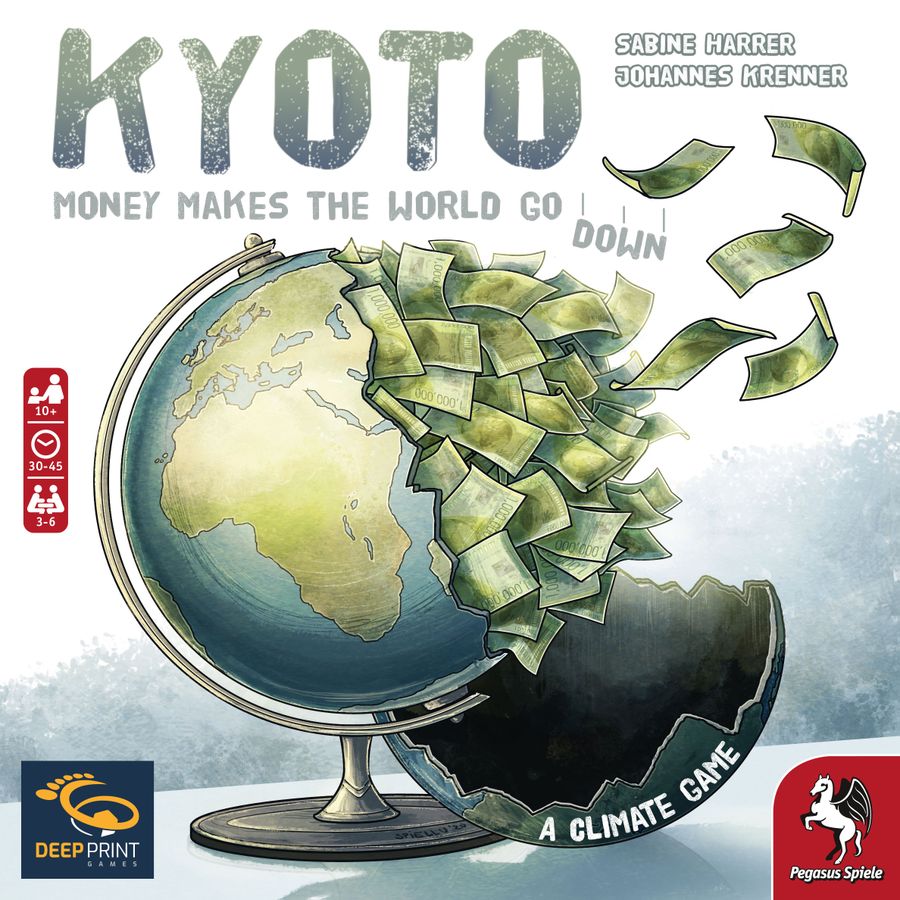 Kyoto is a game of bribery and negotiation with an all-too-real theme. Players represent countries of the world working to curb the effects of global warming. Meaningful action requires financial investment, and no player wants to see their country’s economy hurt. How much are you willing to contribute for the greater good?

Kyoto is a game about saving the world. Mind you, not from a mad scientist’s doomsday device, nor from an alien invasion, but from the very real, very present threat of global warming.

In this game, 3-6 players represent countries of the world meeting at a conference on climate change. Each player begins with a hand of cards and a coffer of money. Additionally, everyone receives 2 secret agenda cards, which signify private interests that may not align with the common goal. Thematically, these might represent, for example, the oil or chemical industries lobbying against climate legislation. 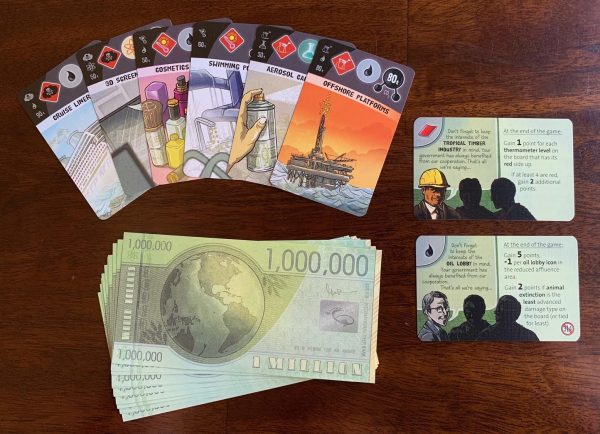 The game is mostly card-based, but a small central tableau tracks the impending crises of global warming, air pollution, and animal extinction. 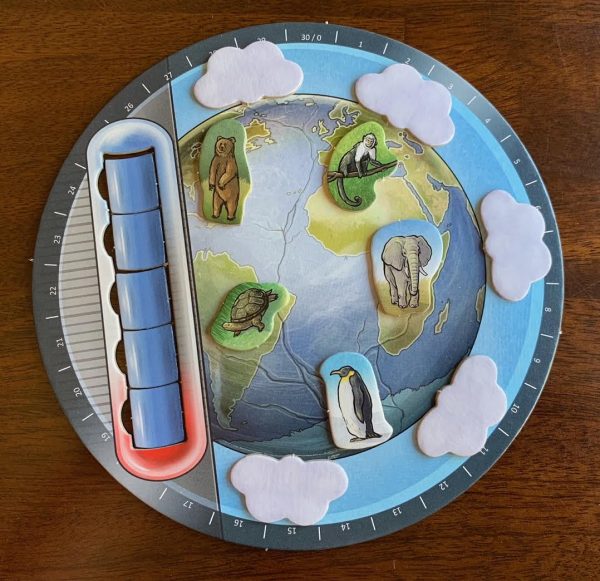 Throughout the game, if any of these crises reach the critical level, the game ends and the player with the most points automatically loses (they are blamed for the ecological disaster).

To play Kyoto, players take turns being the conference speaker. Each round, the speaker begins by taking $2 million from the shared environmental fund. Then, they draw a card representing a scientific study. 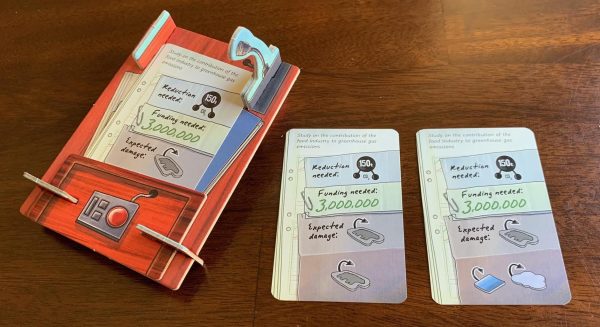 After the study card is selected, players have 90 seconds to negotiate. This phase of the round is where the meat of the game lies. Each player can contribute up to 2 cards from their hand, along with any amount of money they wish. Additionally, they may try to bribe others to play… or perhaps not play a particular card.

As expected, this can lead to some tense haggling and cutthroat negotiation. At the end of the 90 seconds, the round ends with 1 of 2 possible outcomes: 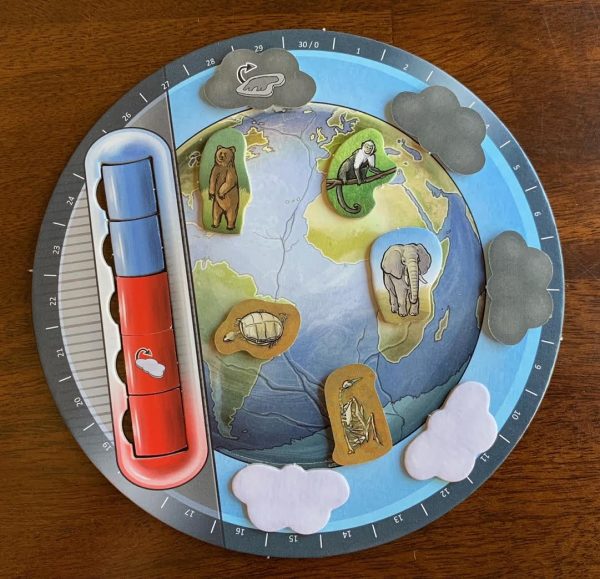 It’s heartbreaking when an animal species goes extinct and players have to flip its token over to the skeletal side.

Kyoto feels poignant, relevant, and perhaps a little existential. Players spend the game trying to pass the buck to others, hoping that opponents will contribute to the greater good while they sit back and save their money. It’s an interesting exercise; all players need to help out in order avoid disaster, but each person wants to help out the least.

What’s also interesting is players’ desire to be in first or second place, depending upon how the game plays out. If everything is going great, everyone will aim to have the most points, but as soon as crises seem imminent, strategies will shift as players shoot for second place.

Of course, negotiation is at the heart of the experience. Wheeling and dealing is key, and the 90-second time limit keeps the pressure high. Real-time aspects in games are hit-or-miss for me, but this mechanism works pretty well here.

The production quality of Kyoto is okay, but there is nothing spectacular about it. To be fair, though, the game is mostly card-based, so the other components are minimal anyway. The 3D lectern is a nice touch, and it serves the functional purpose of concealing hidden information on the study cards. All told, the game looks alright, but it’s not exactly eye-popping.

In terms of fun, however, Kyoto is indeed an enjoyable game. The bribery and “table talk” are what make the experience, so fans of negotiation games will likely enjoy it. It plays in under an hour, so it’s good for lunchtime game groups and family game nights. (And with the right group, it could even start some meaningful dialogue about the real threat of climate change.)

If you like games with lots of wheeling and dealing, give this one a try!

A review copy was provided by Pegasus Spiele.

Kyoto is an interesting semi-cooperative game. It feels relevant, poignant, and perhaps a little existential. Recommended for fans of games with lots of "wheeling and dealing."