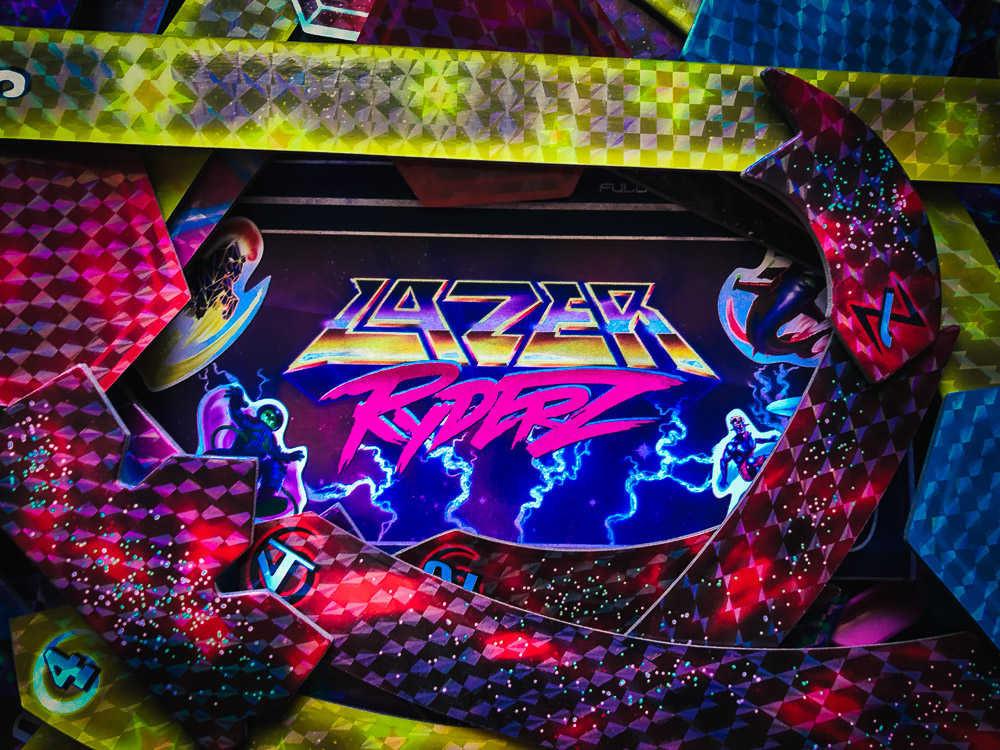 Lazer Ryderz was funded on Kickstarter in November 2016. Lazer Ryderz is a 2-4 player racing game from Greater Than Games (Fabled Nexus). Designers Anthony Amato and Nicole Kline are also behind designs for the upcoming IDW classic Atari tabletop series, which includes Asteroids, Centipede, and Missile Command. 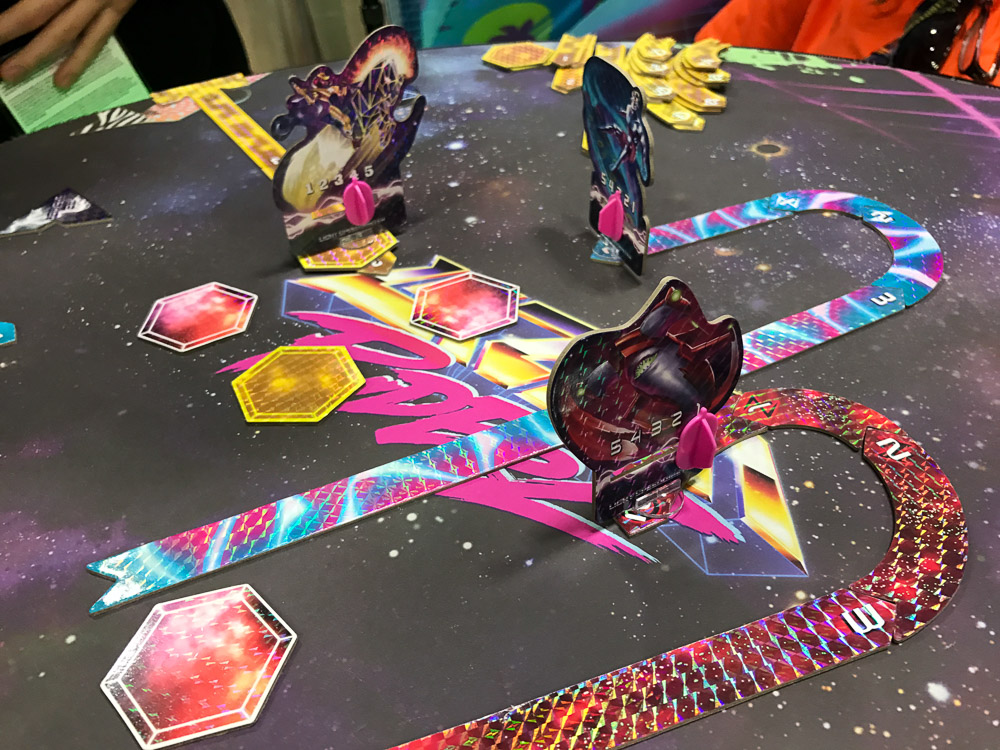 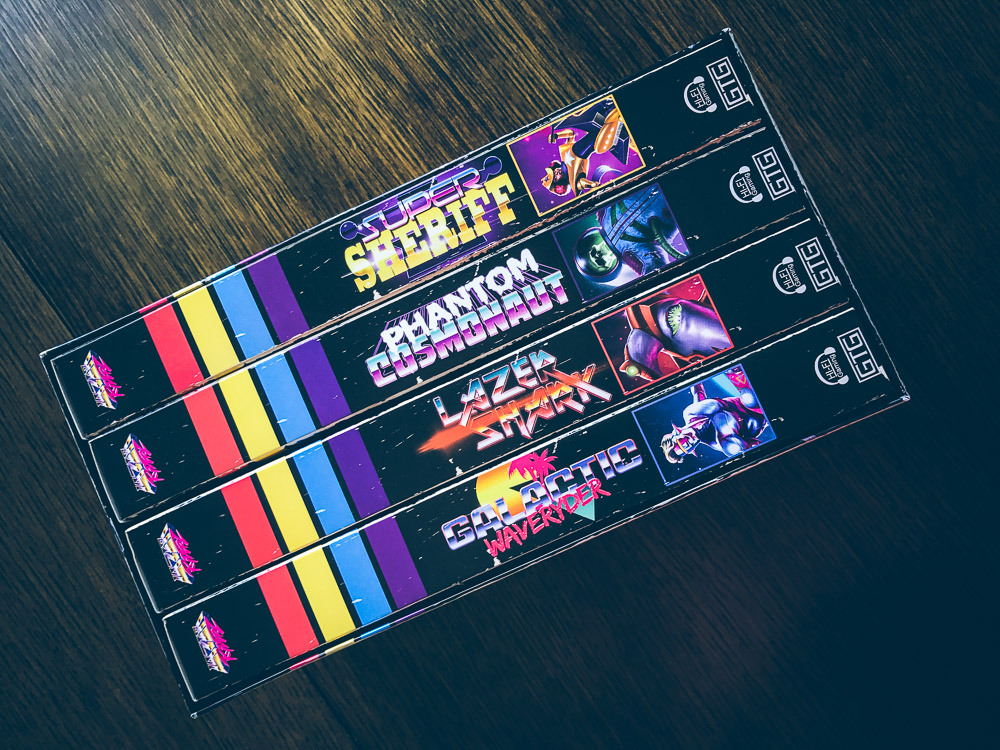 Crack open a VHS box and get the music pumping, it’s time to fly through space and time, y’all.

Vroom on your exhaust, slide on a pair of funky shades, and blast some Daft Punk.

Lazer Ryderz is an 80s-style explosion of neon, holographic reflectors, and VHS tapes. 2-4 players choose the character of their choice and grab a box of awesome. Each psychedelic box includes prisms, track, a character figure, and other accessories needed for gameplay. If you want a taste for style, check the original Kickstarter page out. Radical.

In Lazer Ryderz, each player must zoom through three prisms in order to unlock lightspeed travel across the galaxy. In X-Wing: The Miniatures Game fashion, players move by selecting a gear and playing the appropriate lazer track piece in front of them, bolting their character across space and time.

Like TRON, if a player hits another lazer track, he will crash, explode into space crumbles, and then respawn at their starting location. Characters each have special abilities that can give themselves advantage, or thwart the plans of another player. Super Sheriff can override another player’s gear to one or five, while Lazer Shark can move, and then move again with a five gear straight move. 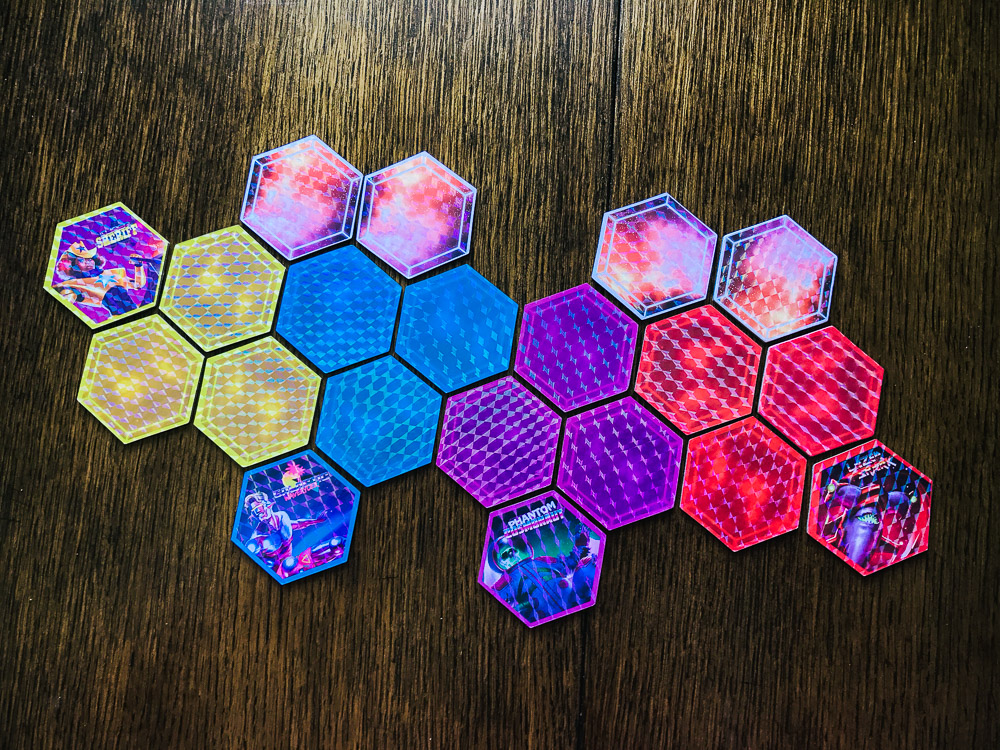 Players can steal prisms from one another, but in general, have to completely cross the length of a prism in order to nab it. After jacking a prism, that player replaces it with one of his own color, then takes the original and blind tosses it back onto the table. This provides more opportunities to grab prisms and speeds up the game. If a player doesn’t clear a prism, the prism is nudged away, leaving it open for next turn.

Play continues until one ryder crosses and takes three prisms. At this point, this ryder is the winner and everyone else sulks.

I first played Lazer Ryderz as a quick demo at Origins this year. Myself and a few friends learned the rules in just a few minutes. Before I knew it, my mind was transported into a galaxy of light speed travel and heavy electronica 80s-inspired soundtracks.

Art direction caught my eye immediately. Our table space had a printed Lazer Ryderz decal. On the side of the table sat the gigantic game box, bringing to mind memories of my childhood Star Wars Trilogy VHS Special Limited Edition Collector’s Set. Each character is contained in its own cassette tape slide box. On the rear, you’ll read a backstory. On the inside, you’ll find a concise insert with etched slots for each component the character needs for gameplay. 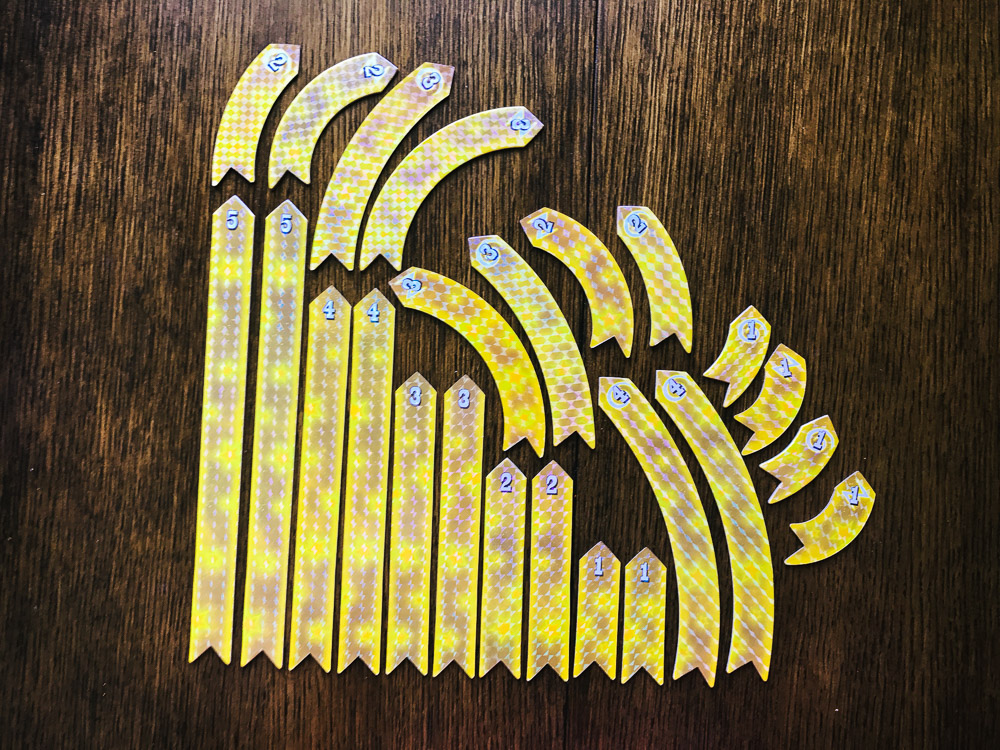 All the tracks you can choose from.

Lazer tracks for all four characters bear their respective color palettes. The surfer is an explosion of light and fluorescent hues of blue. The undead cosmonaut a dark purple of galactic mystery, harkening thoughts of nebulas far away. Stars of gold spray from the thrusters of the Sheriff’s journey. The holographic style of each track and character are blazen reminders of a decade I missed. I have noticed a few components are slowly pulling up and peeling from the cardboard. I’m not sure how widespread this is, and it’s not particularly noticeable. Since pieces are always being dropped and scooped and pushed and pulled—this could be a long term issue.

The artstyle has been an immediate conversation starter with anyone who’s seen the game box. It’s obviously unique, and creates exhortations like, “THIS is what we’re going to play?” Jaws gape with awe at the mystery the odd box and reflective appearance create.

In terms of gameplay, Lazer Ryderz is exciting but is marked by weird, unavoidable quirks. 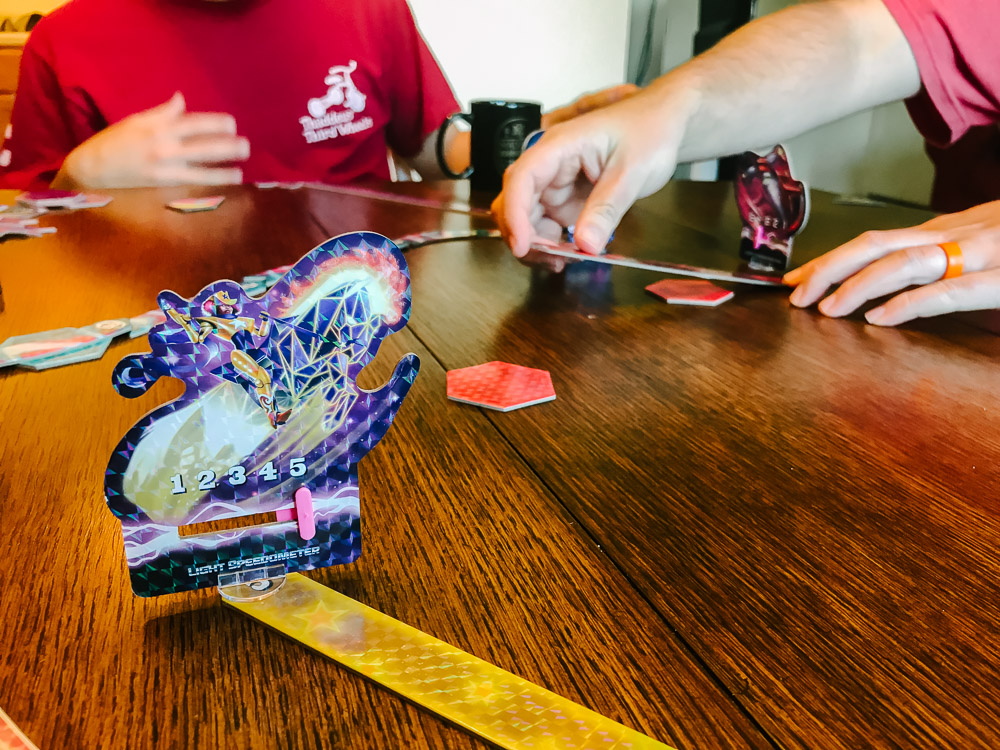 Here, Alex attempts a move toward another prism.

For example: A player takes time to examine the scene. One prism is closeby, and might be reached with a three speed curve. The player must decide between a tighter turn, or a wider turn. To simulate the ferocity and urgent thematics of racing in space, players cannot attempt to measure distance, and must simply decide on a track using their eyes and imagination. The player chooses a track and rolls the die. Rolling under a three would result in being forced to use a straight, piece, and of course, they might roll a “spin out” which allows their curve, but forces them into first gear.

These design choices are all fine. Sometimes a spin out is beneficial, as zooming across the table quickly is great, but a finessed one speed turn allows for precise travel across a prism.

The issue comes with laying lazer track. Once this player decides on the three curve, he must use one finger to hold the current track, while the other hand descends like a toy machine claw to drop the track perfectly attached to the first one. This is the only way to tell if the prism was captured. Let’s say the prism is crossed over—now the player must remove his track and carefully replace the neutral prism with his own. Afterwards, the player must again replace his track. This takes time away from Lazer Ryderz. It’s even more complicated when multiple lazer tracks intersect over a prism. It’s not a deal breaker for me, but it’s one of the most textbook examples of “fiddliness” I’ve seen in a game. 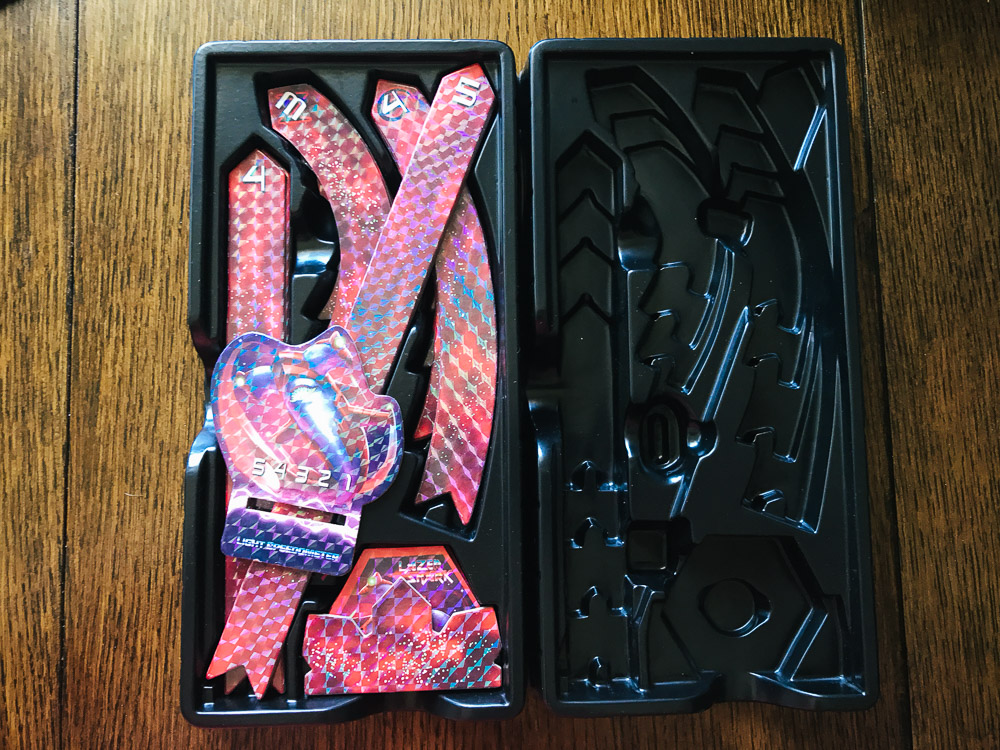 Here’s an insert, packed and unpacked.

On the other hand, Lazer Ryderz isn’t built for extreme competitive play. It’s designed for those nail biting moments when you aren’t sure if you can escape the beam of an opponent with a two track, or if you need to shift into a three gear track. The chase after prisms and encroaching on a group in hopes to steal two prisms in one turn is exhilarating. Predicting your trajectory and deciding whether to shift higher to take first place in turn order is constantly on your mind.

To its advantage, Lazer Ryderz is easily taught to a group in just a few minutes. The rules are a tad fiddly on nudging, locking, how and when to shift gears, tie breaker status, etc. Ultimately if one player knows the rules well enough, he can act as a game master and sort out issues. I spent most of my games just telling players when it was their turn, and they allowed me to handle the turn order and things like that. This also isn’t a deal breaker, but you should be prepared to teach and run the game well. 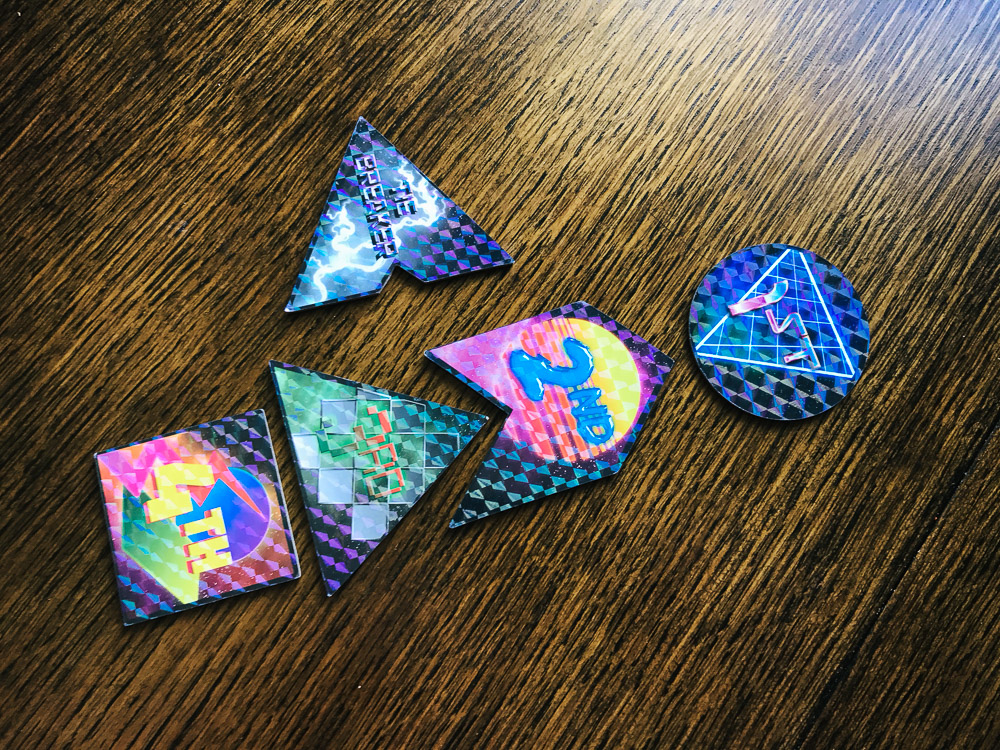 Turn order tokens with the tiebreaker.

For the simplicity Lazer Ryderz presents, games can go a bit long—sometimes 45 minutes when it seems like a 20-30 minute game. Part of the length is from beginners playing the game, but it’s fair to tell the table not to overthink plays and just lay some track. It’s more fun to let accidental crashes happen and laugh than to use parabolic formulas and the pythagorean theorem to determine distances.

The included inserts are decent, with sections for each piece. It’s a bit of a puzzle to fit everything back into the boxes, but it’s not a bad deal, and gives players a fun activity after each game. Setup is as easy as flipping over the insert like a bucket of legos onto the table. Take your launch pad and you’re ready to go.

Lazer Ryderz is silly, great to look at, and requires Daft Punk in the background to fully enjoy and experience.

A review copy of Lazer Ryderz was provided by Greater Than Games.

Lazer Ryderz is a trip of a game to play. Presentation is on point, and each game will make ridiculous memories, though you’ll find a bit of rules and gameplay fiddliness.