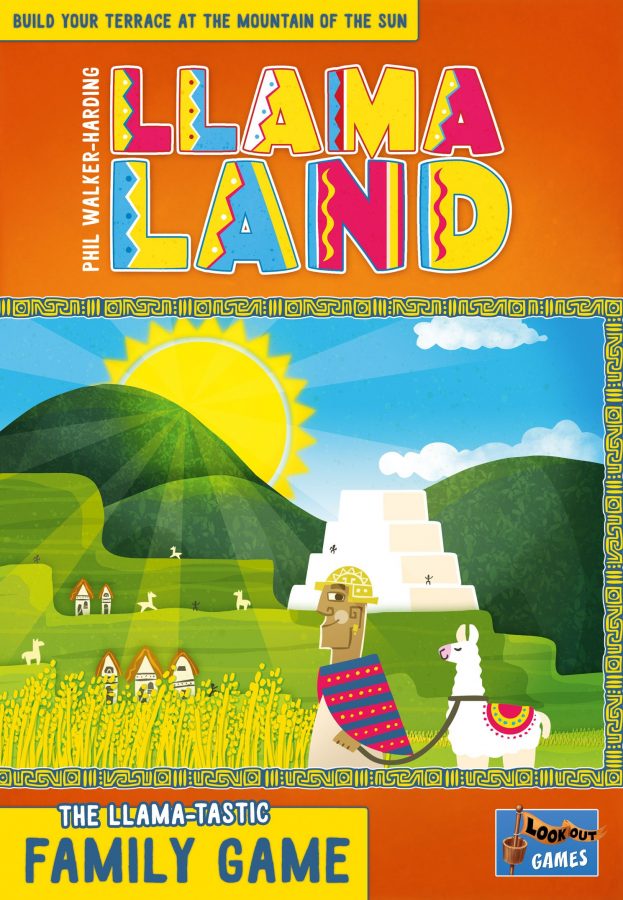 One of my favorite tile-games is Bärenpark by Phil Walker-Harding. It plays incredibly smoothly and quickly, and it feels great when all the pieces fit together. Walker-Harding himself has said that Llamaland is “the final game in the trilogy” that includes Bärenpark as well as his lesser-known tile game, Gingerbread House, which has players building up instead of out. Is Llamaland the best of both worlds? Let’s find out! 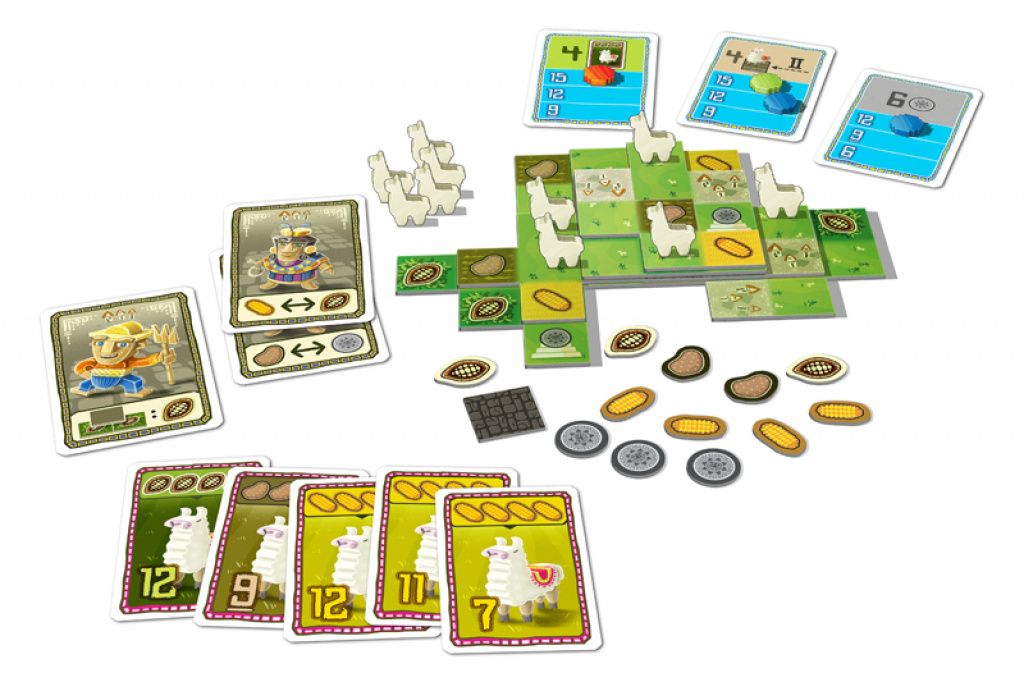 Let’s start by talking about the components. Lookout Games has always put out quality games with great art and great pieces, but this honestly feels like one of the best productions they’ve ever done. The cardboard tiles — and there’s quite a few of them — are extremely chunky and thick, and some of the best tiles I’ve ever played with. The Llamas are understandably small but very cute, and the cards seem like quality cardstock. I would have loved to have an insert included, but I don’t know how it would have even fit with the punchboards. Nevertheless, this game is a great value at $39.99 MSRP for the pieces if nothing else.

Regarding the gameplay, we can’t really discuss this game without comparing it to Bärenpark and Gingerbread House. All three games involve covering icons with tiles to get benefits; Bärenpark focuses on polyominoes that net you bigger and better polyominoes, while Gingerbread House uses dominoes to collect sets of resources that are cashed in for cards that give points. Llamaland combines these ideas; players are collecting resources by covering polyominoes (pentominoes, specifically) with more polyominoes, while also working towards various objective cards. In addition, new to Llamaland are helper cards, which can provide extra resources or allow players to swap resources for each other.

For Phil Walker-Harding, it’s a lot! This is by far the most advanced game he has ever produced. That isn’t to say it’s “heavy”; far from it. But while my 7-year-old quickly grasped everything she needed in Bärenpark, some of the nuances of Llamaland required constant reminding or a second playthrough, such as the distinction between expanding your estate (the only time you can claim objective cards) and building your estate upwards to collect resources, or remembering to use the helper card effects. There’s also a deep complexity hidden within the game components: pentominoes are much more difficult to process than tetrominoes, which were the focus of Bärenpark. We often found ourselves grabbing pieces and orienting them around our board to plan for our upcoming turns, but this actually doesn’t work out well because each piece has its own distinct resources to cover; the active player often needed the piece we wanted to play with.

The difficulty of pentominoes belies the biggest issue with Llamaland. Polyominoes are becoming incredibly overused in board games (I think this is the fifth game from Walker-Harding to use them, though Uwe Rosenberg is really the one to blame for the phenomenon), and I think we’ve lost sight of what makes them fun in the first place. If you ask someone what the best part of Tetris is, they will almost surely tell you it’s when you drop a long stick and clear four lines at once. It feels good when everything fits just right. This is what made Bärenpark so satisfying; getting points for that bear statue plugging that last little hole felt great! But in Llamaland, your final board looks like a hot mess, not unlike The Isle of Cats or My City. Occasionally it feels like a great move when things fit just right, but more commonly you’ll use your 3 “freebie” squares to make things work, so you never really get that feeling that, to me, makes polyominoes worth enjoying.

I don’t mean to say that I dislike Llamanland. It looks great and plays smoothly and quickly, and I find it far more engaging than Gingerbread House, the other game in the Walker-Harding “tile-laying trilogy”. I also find the objective cards a great way to add focus and tension to the game. But a game this complex feels a bit odd coming from the man who’s made a name for himself drilling games down to their very core and stripping anything extraneous away. While I still vastly prefer Bärenpark, those looking for a tile-laying game with a bit more crunch may find a lot to like here.

While Llamaland doesn't quite live up to its predecessors, it still has enough Walker-Harding magic to make for an enjoyable game.