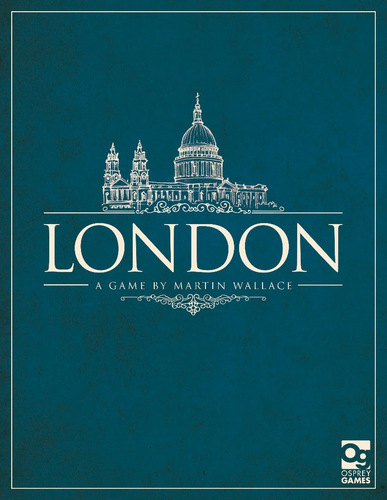 London is a city-building card game focusing on the city of London in the later years after the great fire in London. Players determine the poverty level of the city as they construct bigger buildings and hire new people around the city. 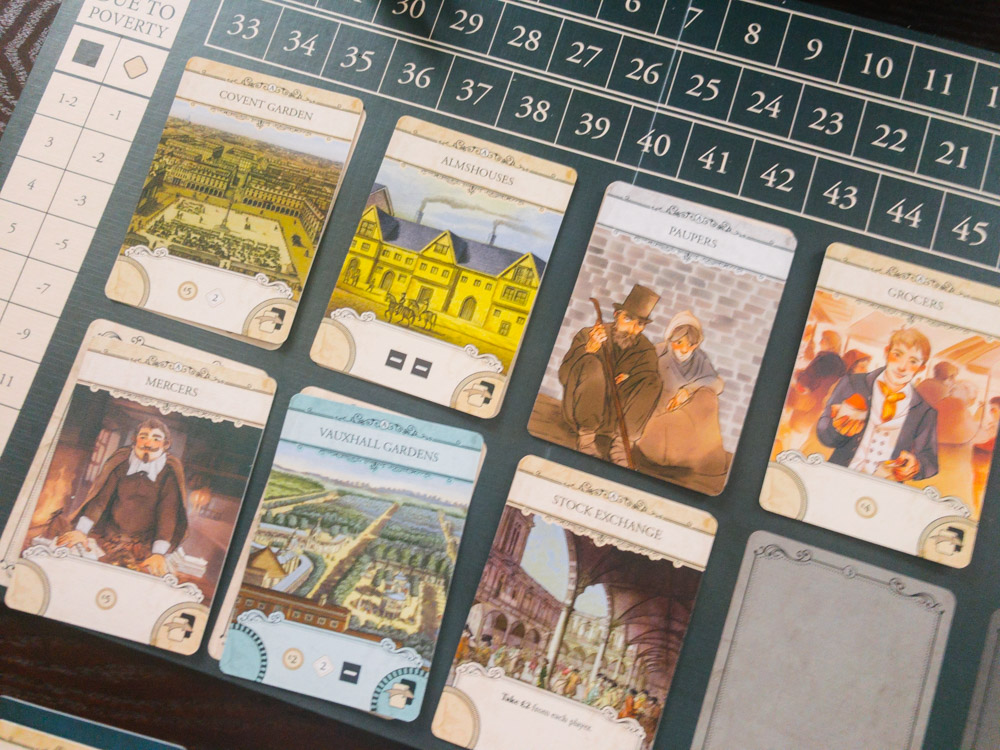 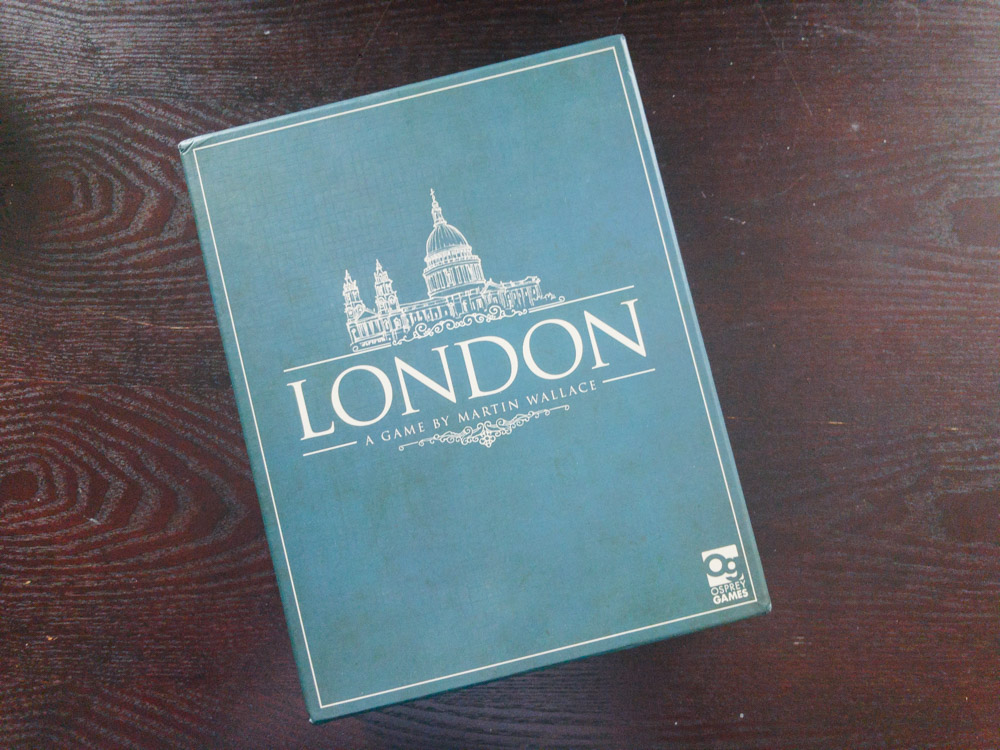 I’ve long awaited a good opportunity to sit down to play a design from Martin Wallace. Initially, I was elated to hear of and see the upcoming reprint of Brass, but playing it still lies a few months away. At some point in 2017, I spied a photo in an Osprey Games catalog for a reprint of Wallace’s London. As usual with Osprey, the box art looked slick and pristine.

In very late 2017, I received a copy in the mail and sat down for a quick solo game to teach myself the rules. This lone session is a ritual of mine to ease teaching my game group. When I’m learning a game, I get a good peek into mechanics and how turns flow, but usually the meat and interaction of a game stays hidden until I’m finally with friends around the table. I’m getting into my routine here because my solo game revealed one of the most interesting thematic design choices I believe I’ve ever seen in a board game. This defined my mindset for each subsequent game, and easily sets London apart from other card game fare. I’ll reveal this tasty thematic morsel in just a moment.

In London, players are likely nobles or wealthy aristocrats who are responsible for increasing the economy of London after the disaster of the great fire. Played over three eras, players earn and play cards which constitute shops, boroughs, bars, monuments, and employees. This is all for the sake of prestige, or victory points. At the end of the game, the player with the most prestige goes down in history as the most formidable and wealthy reconstructor of lovely London.

Starting the game with a handful of cards, on a player’s turn, he can do one of the following: 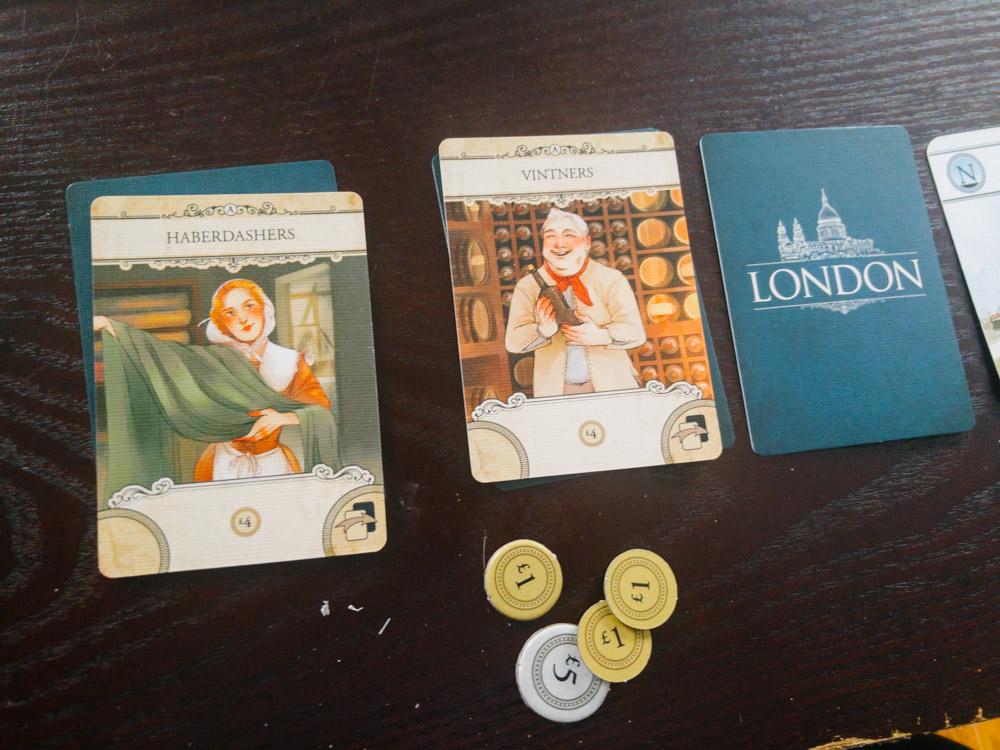 Each card stack offers abilities, but will also hurt the owner if he is not wise and calculating.

Initially, it seems the solution to winning in London is by getting as many actions as possible, much like new Dominion players aim for Villages for extra actions. This is only done by playing more and more cards into stacks. After all, once a player runs his city, he’ll pick up abilities, coin, and other goodies for activating his cards. As the city grows, however, so does the people’s gap in society.

The delicate balance of London relies on players balancing their cards in hand, their diminishing supply of cash, and the number of stacks they’ve created. This matters because of the intricate design choice I mentioned earlier. Each card in hand, loan, stack of cards, and sometimes borough will generate a resource called Poverty. Poverty quickly infects the side of each player’s constructed tableau. Black blocks pile up and turn into circular tokens. Players count the infestation, comparing the numbers to the scoreboard, recognizing their potential demise at game end.

At the end of the game, players will all lose precious victory points for their Poverty, but it’s not just a points lost mechanic. No, it’s far more intriguing than that. Throughout the course of the game, players determine the course of London’s history. Some might invest in sewers to keep streets clean for the people. Others care little for the poor, building a number of factories with little expenses paid toward housing or street cleanup. They might become wealthy, but in the end, they pay. 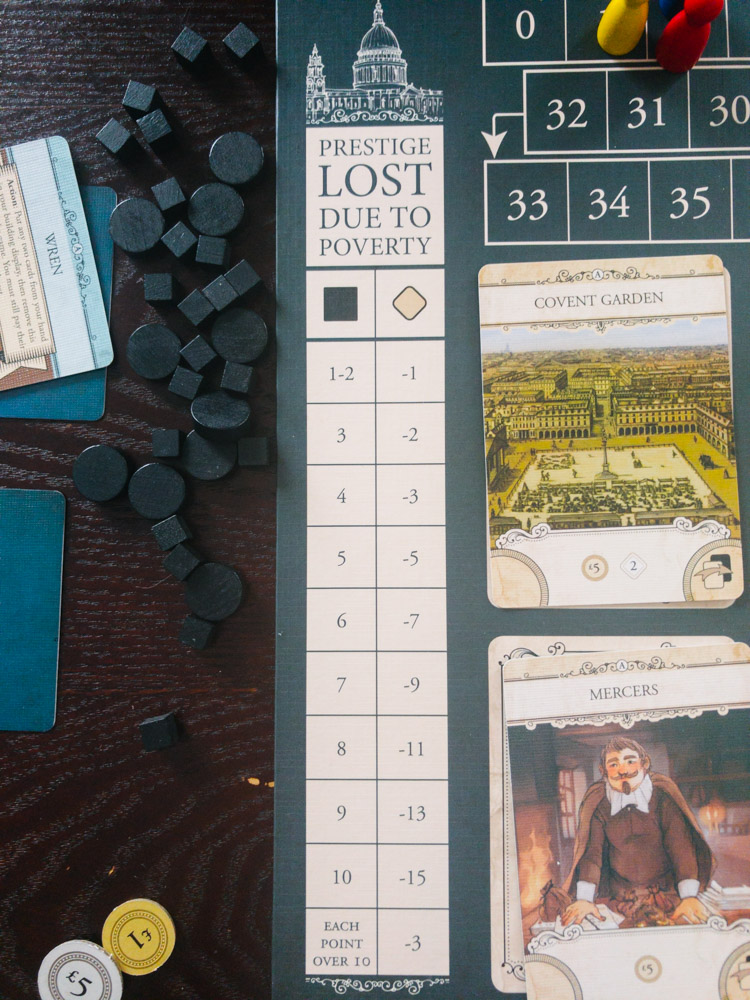 The Poverty track is easily the most thematic and intriguing design concept in London.

And now, the reason I adore London: The player who has accumulated the least amount of Poverty, discards all of his Poverty (effectively erased from the history books) and each other player discards the same number of Poverty tokens from his supplies. From here, each player with Poverty compares his numbers to that on the score track, and then loses however many points are depicted. Poverty could have been a monotonous “should have fed your people” design, and instead becomes a race and thrust for players to both thematically and mechanically determine the wealth and health of the city. This means some games will feature many players ruthlessly gaining Poverty for their own pocketbooks, and others where players carefully weigh each decision to mastermind their end game collection of black tokens.

I enjoy card games, but I usually want them to end in 15-20 minutes. If I’m playing something longer, I want a big board, lots of pieces, and lots of interesting decisions. London plays a bit long, but because of the Poverty mechanic and gorgeous art design, it doesn’t overstay its welcome too much. Sure, I wish it could run 20 minutes shorter, but the advantage is having a table full of friends who know the game well. It can play as quickly as players determine, which is great, because it’s not at all fiddly. Players won’t be trading multiple resources or having to make checks before making decisions. London flows rather seamlessly.

As players discard cards from their hand to pay for cards, these refuse make their way to the main board. When prompted, players can draw cards from this board as well. This allows for a consistent flow of new cards in and out of players’ hands, which acts as a weird drafting hybrid, letting players determine and fixate on specific goals for their part of the city. Coupled with learning the economy and trying desperately to stay on top of their own cash flow, London provides ample opportunity for players to make their own mark on each game. 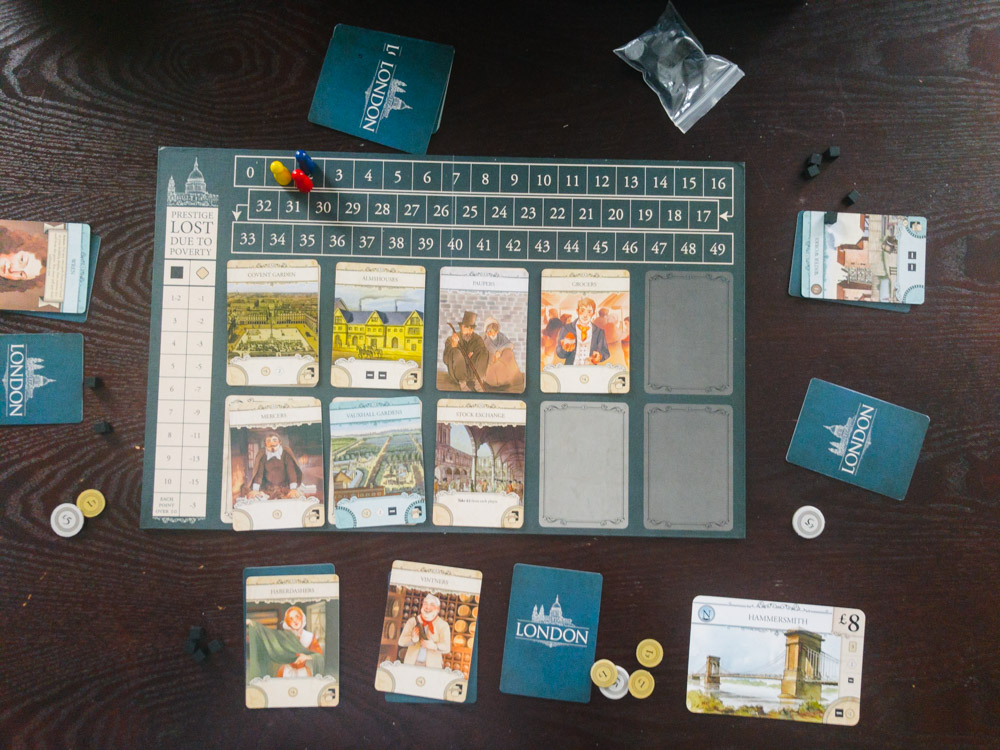 The main board. These cards fall off and fluctuate. Every action from each player needs to take into account which cards are being made available to opponents.

Once again, Osprey Games hits another home run. I’ve never felt let down by a game from Osprey, because even if gameplay feels tedious or mediocre at some point, it’s saved by beautiful art or graphic design. In this case, London is pretty. Each card is decorated by sensible and dreamy watercolor. Colors are generally pastel and light, making the game look slick on the outside and dreamy as you flip cards. Graphic design is clever and teaches players to quickly learn the value and place of a card. Symbology is learned swiftly and never feels overdone or complicated.

One glaring downside for me is linked to my rigid standards for card games. I think the cost, which is close to $45, is very high for a card game. Granted, London is precious and extremely high quality, but I still think a price closer to $35 would be a bit more reasonable. Now, one could make the point that you pay a bit more for premium art direction and component quality, and I think I could bite on that argument. After all, I’m always pleased with Osprey Games.

Regardless, if you’ve any interest at all in a Martin Wallace design, or want to play a fascinating game that’s great thematically and practically, look no further. London has it all. 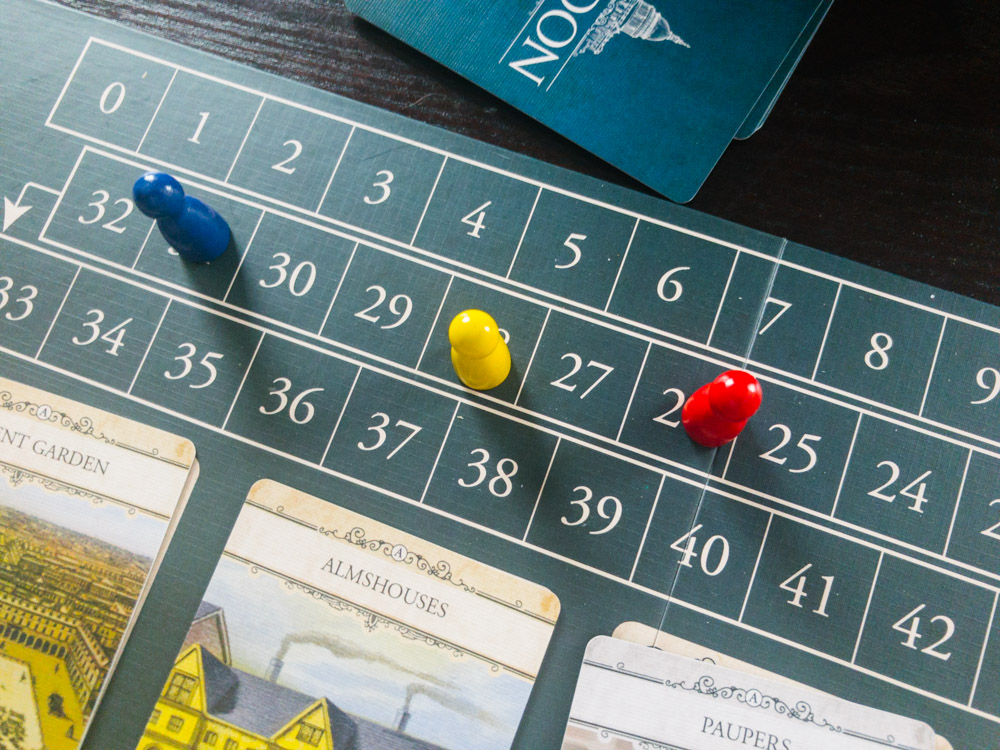 A review copy of London was provided by Osprey Games.

London is a strongly thematic game that offers lots of hard, but meaningful decisions. Though it runs a bit long, London is a high production quality game that's sure to keep interesting after many plays.