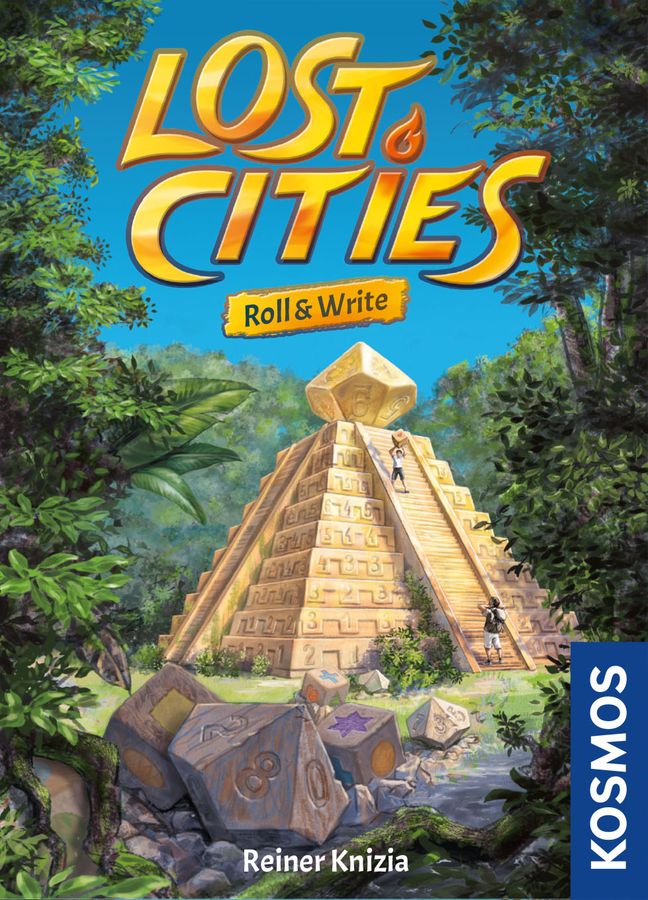 Lost Cities: Roll & Write takes Reiner Knizia’s classic card game Lost Cities and adapts it into a new format. Unlike the original Lost Cities, which is a 2-player only game, this new roll-and-write version can accommodate up to 5 players. How does it compare to the original? Read on!

Lost Cities is an excellent game, an absolute must-have for couples. (I have bought it for at least 4 pairs of newlyweds in my life.) Multiple adaptations of the game have been made over the years, such as Lost Cities: Rivals and Lost Cities: The Board Game, but the latest is Lost Cities: Roll & Write, which is exactly what it sounds like.

Like most roll-and-writes, this game is played on individual player sheets rather than a central board. Each sheet has 6 colored columns, corresponding to the colors on the dice, as well as a column of vase icons and another of dice icons.

The goal of the game is to earn the most points. Each turn, the active player rolls all 6 dice; the 3 d6’s show color results and the 3 d10’s show number results.

The active player then chooses a color/number combination from the dice pool (e.g. a red and a 5), claims that pair of dice, and writes the corresponding result on their sheet (e.g. a 5 in the red column). Each of the other players then chooses a combination from the remaining 4 dice and writes it on their own sheet. Multiple players may use the same dice.

Numbers are always written from bottom to top, and each successive number must be greater than or equal to the number before it. This means that if a player began their blue column with a 3, they would never be able to use a blue 1 or 2 thereafter.

First, the lowest space in each column is a “double-points” space—these are comparable to the handshake cards in the original Lost Cities. If a particular track on a player’s sheet is empty, they may use a 0 result to mark off its double-points space (e.g. if the green track is empty, a green and a 0 can be used to cross off the green space). This will, of course, double the value of that track during scoring.

Second are the “acceleration” spaces, which feature an arrow. When a player reaches an acceleration space, they may immediately advance any track 1 space for free. To do this, they look at the highest number on that track and write it again in the next space.

Third are the vase icons, called artifacts, which allow a player to cross off an icon in the artifact column. The more artifacts a player crosses off, the more points they will earn during scoring.

If any player cannot or does not wish to use the dice in the pool, they may instead pass and cross out a dice icon on the right side of their sheet (again, going from bottom to top). These icons provide an increasing amount of points, but if the column gets completely filled up, it is worth nothing!

The game continues with players rolling dice and choosing combinations until either all dice icons have been crossed out on all player sheets, or until all 8 of the bonus bridges have been crossed. At this time, players calculate their scores and the player with the most points wins!

Lost Cities: Roll & Write does a good job adapting the Lost Cities card game to a dice-based format. The core mechanism of building columns of increasing numbers will feel familiar to anyone who has played the original game. The scoring is even a bit more streamlined than the original—each row of the columns is worth a flat number of points, no addition or subtraction required.

It’s also nice that this game allows for more players while still remaining highly portable. Its small box makes it easy to toss into a purse, backpack, or suitcase. I appreciate, too, that the player sheets are double-sided; it drives me crazy when roll-and-writes don’t do this.

With these positives in mind, however, some aspects of the original game get lost in the translation from cards to dice. The Lost Cities card game is full of strategic subtleties, such as holding onto cards the opposing player needs, deciding whether to draw from the deck or the discard piles, and trying to rush or prolong the game depending upon the current situation. The very nature of dice-rolling more or less removes these aspects. Whereas there is only 1 copy of each numbered card in Lost Cities, a particular dice pair can and will come up repeatedly in Lost Cities: Roll & Write. This means players can’t make their opponents “Go Fish” for a particular result like they can in the card game. Admittedly, there is the slightest bit of room for hate-drafting in Lost Cities: Roll & Write (e.g. my opponents need high numbers and I grab the only high number there is), but more than likely, the result someone needs will come up again soon. Ultimately, these changes make the roll-and-write version of Lost Cities feel a little less nuanced than the card game.

Still, when I examine this game as its own thing, independent of other Lost Cities games, I enjoy it. Roll-and-writes are pretty hit-or-miss for me, but I like this one. If I had to choose between Lost Cities and Lost Cities: Roll & Write, I would stick with the original, but if I’m in the mood for a roll-and-write game, this is certainly one I would reach for.

A good re-implementation of a great game. If I had to choose between Lost Cities and Lost Cities: Roll & Write, I would stick with the original, but if I’m in the mood for a roll-and-write, this is certainly one I would reach for.