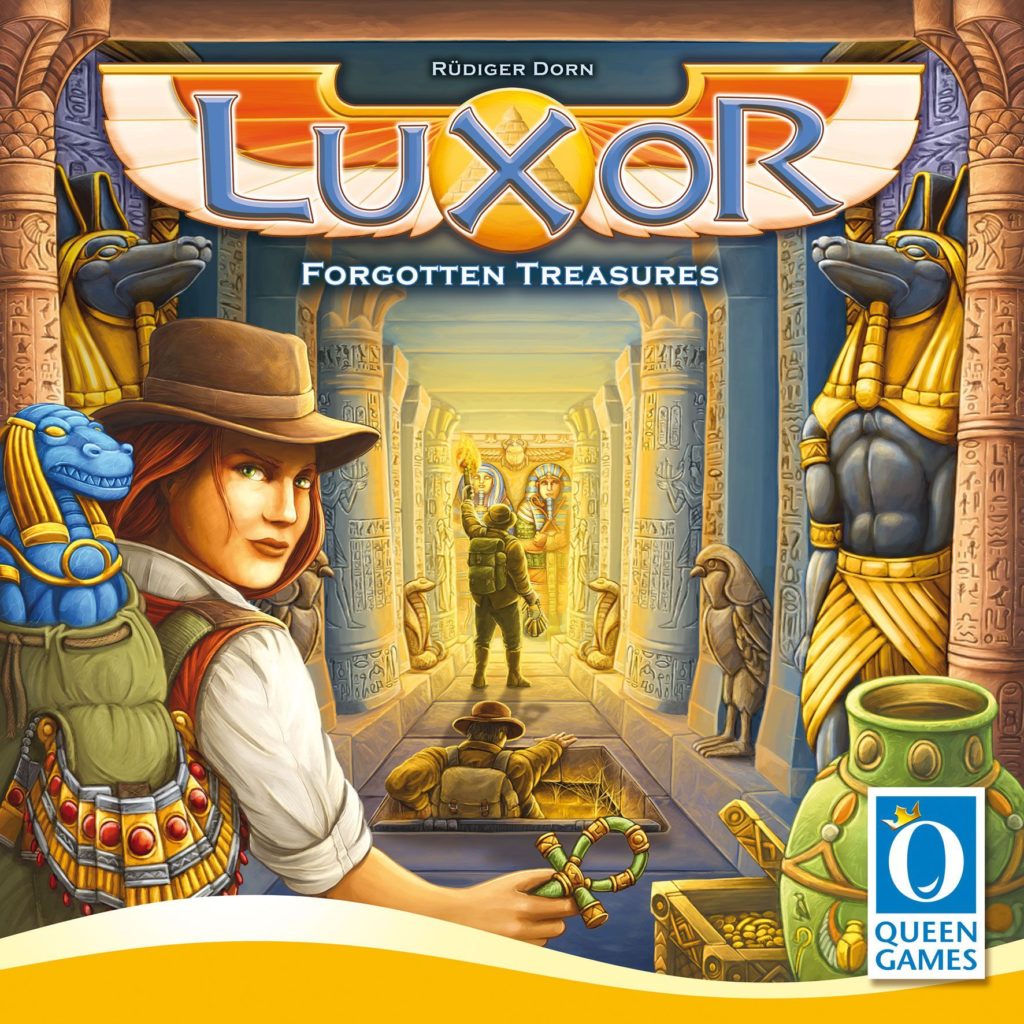 Every year, three games are nominated for the Spiel des Jahres, Germany’s Family Game of the Year. The winner is guaranteed a huge boost in sales and notoriety, and often one of the runner-ups sees an explosion of success. But what about the third game? In 2018, both Azul and The Mind became smash hits in the board gaming world, but it seems like many gamers have let Luxor pass them by. Let’s get that fixed right now. 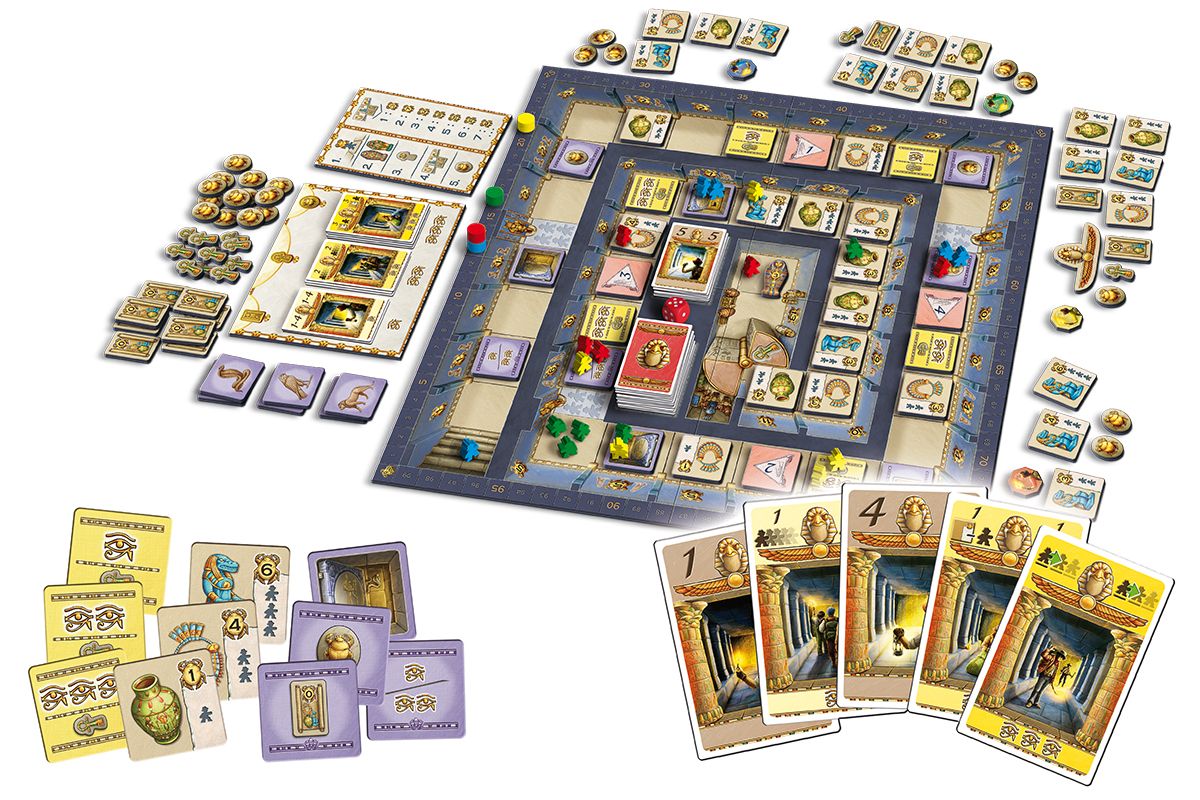 In Luxor, players are adventurers racing to find treasure inside an ancient temple. This theme is fairly overused: it’s already been used by the publisher (Escape: The Curse of the Temple), the designer (Karuba), and even a Spiel nominee the year prior (The Quest for El Dorado). On the other hand, it’s a popular theme for a reason: it gives the players a clear sense of what they’re doing thematically, and it feels exotic and exciting. And Luxor’s artwork is quite nice, though I’m most impressed with how chunky all of the cardboard pieces are. The $60 MSRP price tag is high, but there’s admittedly a lot of stuff in this box.

Like many other modern racing games, getting to the ultimate treasure first doesn’t necessarily guarantee a victory. Players vie for the most points, and while the final treasure chamber provides quite a few, players are also collecting sets of treasure, and are awarded points for each of their five adventurers and how far they make it into the temple. While set collection is a fairly standard concept, Dorn is able to do a lot with a little here, as he often does.

When players take a treasure tile from the board,  the empty space is “no longer” part of the board, in the sense that players skip that tile when counting how far their adventurers move. This prevents a common issue with racing games, where the rich get richer once a player gets ahead. You also can’t just send one adventurer straight to the end and expect to win; most treasure tiles require players to put several of their own adventuers on the tile together to claim it. These are easily explained rules with big impact, they’re brilliant, but it can be hard to notice that. It’s because they’re so easily intuited and internalized without noticing that they’re the hallmarks of great design.

And of course, players will likely be focused on the main “twist” of the game, which is how movement works. Players have 5 cards in hand, each dictating how many spaces they can move, but they can only play the leftmost or rightmost card of their hand. New cards are always placed in the middle of the remaining 4 cards. So while players can get going right away with a simple binary choice, advanced planning is required to maximize your efforts. If you’re really excited about the new card in the middle, you’ll need to play both cards on one side of it to get to it as fast as possible. This is a fantastic system, and I wish something similar had been implemented in other great games with frustratingly small hand sizes.

These mechanisms are simple and clever, but so far all we’re doing is walking around and collecting tiles. But Dorn is able to add just enough spice to make the game interesting. I’m a card gamer through and through, and after so many years of Magic: the Gathering, getting some special cards that only I have is extremely satisfying. Some spaces on the board are “Horus” tiles, which either give keys needed to get to the final temple, or give you special movement cards that give far cleverer options than “move X spaces forward”. For example: move all of your adventurers 1 space each, or move your farthest-behind adventuer all the way to the second farthest. Additionally, some spaces become Temples with special effects that change from game to game. This provides a lot of variability, with the perfect minimal ruleset: you only need to explain the 3 Horus cards actually showing to start (and maybe only as they become reachable); you can explain the Temple tiles and new Horus cards as they appear.

Really, if I had any complaints about Luxor, they’re actually about the expansion. Luxor is definitely a family weight game, and advanced players might eventually want a bit more to chew on. The Mummy’s Curse is a modular expansion, which is great, but I feel like two of the expansions (starting decks, variable player powers) should have been in the base box, and the other two modules (the mummy, the artifacts) are too clunky or out-of-step with the base game’s mechanisms. If Luxor becomes a favorite of yours, I would still get it for the new cards and player powers, but it’s not essential.

It’s been a long time since I was so pleasantly surprised by a game. Luxor is a simple enough game that my 6-year-old can play it with me, and while she hasn’t won yet (at first she just wanted to send one guy straight to the inner chamber), she fully understands the rules and is now working on strategy. Finding a game that is accessible to younger and newer players but still has a substanial amount of depth to explore is a rare treat. Between that, the interesting cardplay, and the nice components, I feel good about recommending this to anyone looking for a family-weight “big box” title.

Thank you to Queen Games for providing a review copy of Luxor.

Luxor is a great choice for families with younger kids or newer players. It ranks right up there with its 2018 Spiel des Jahres competitors.