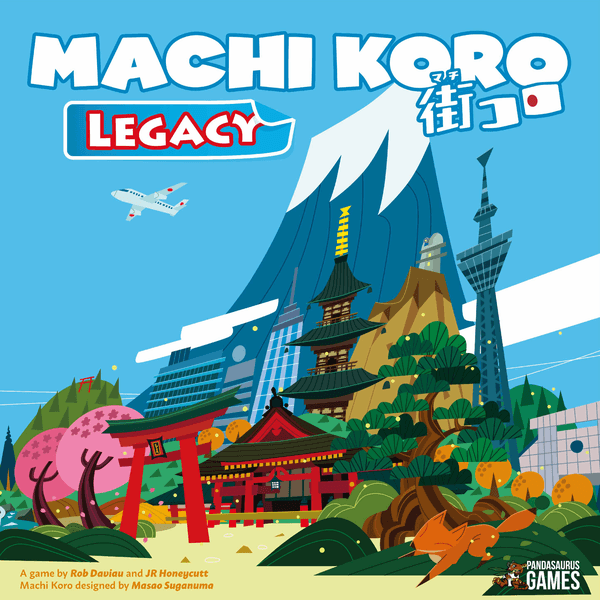 Machi Koro Legacy is an engine-building game where players try to build up their city and construct the most Landmarks. Just like the original Machi Koro, players will start with almost no cards, then slowly build up their collection of establishments. With it being a legacy game, players can expect to make changes and lasting additions to their humble hamlets. So is it a hit, or not quite the kind of town you wanna visit? Read on, prospective Mayors!

In the original Machi Koro, on each player’s turn they roll one or both dice, then activate any buildings that the sum of the die rolls equal. Blue buildings activate on anyone’s turn, green only activate for the active player on their turn, red buildings activate on opponent’s turns, and purple only on the active player’s turn. Usually the red and purple buildings are more of a “Take-that” style, letting players steal coins or other things from each other. After activating establishments players get to take one action, usually purchasing a new establishment or landmark. 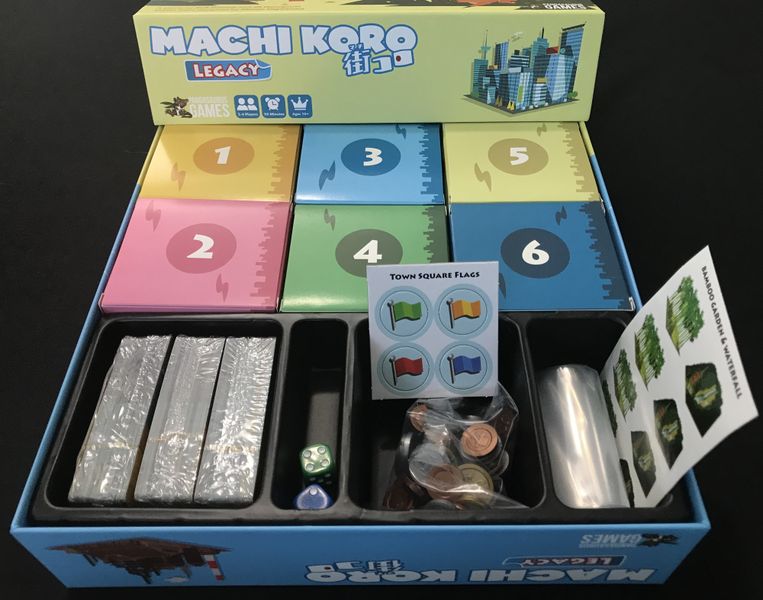 It’s hard to talk about a legacy game without spoiling anything, so I’ll stick to mechanics or low-grade new things that you’d find out the second you opened the box. My first takeaway on opening the box was that they had greatly upgraded the coins from cardboard tokens to shiny plastic. They don’t have the weight of real coins, but they look like they would. Upgraded components are always a plus. The game designers also added a Community Landmark, that is far and away more expensive but also grants a serious boon to each game – and it changes each game. Players who purchase the Community Landmark put their flag on it and get the bonus immediately. 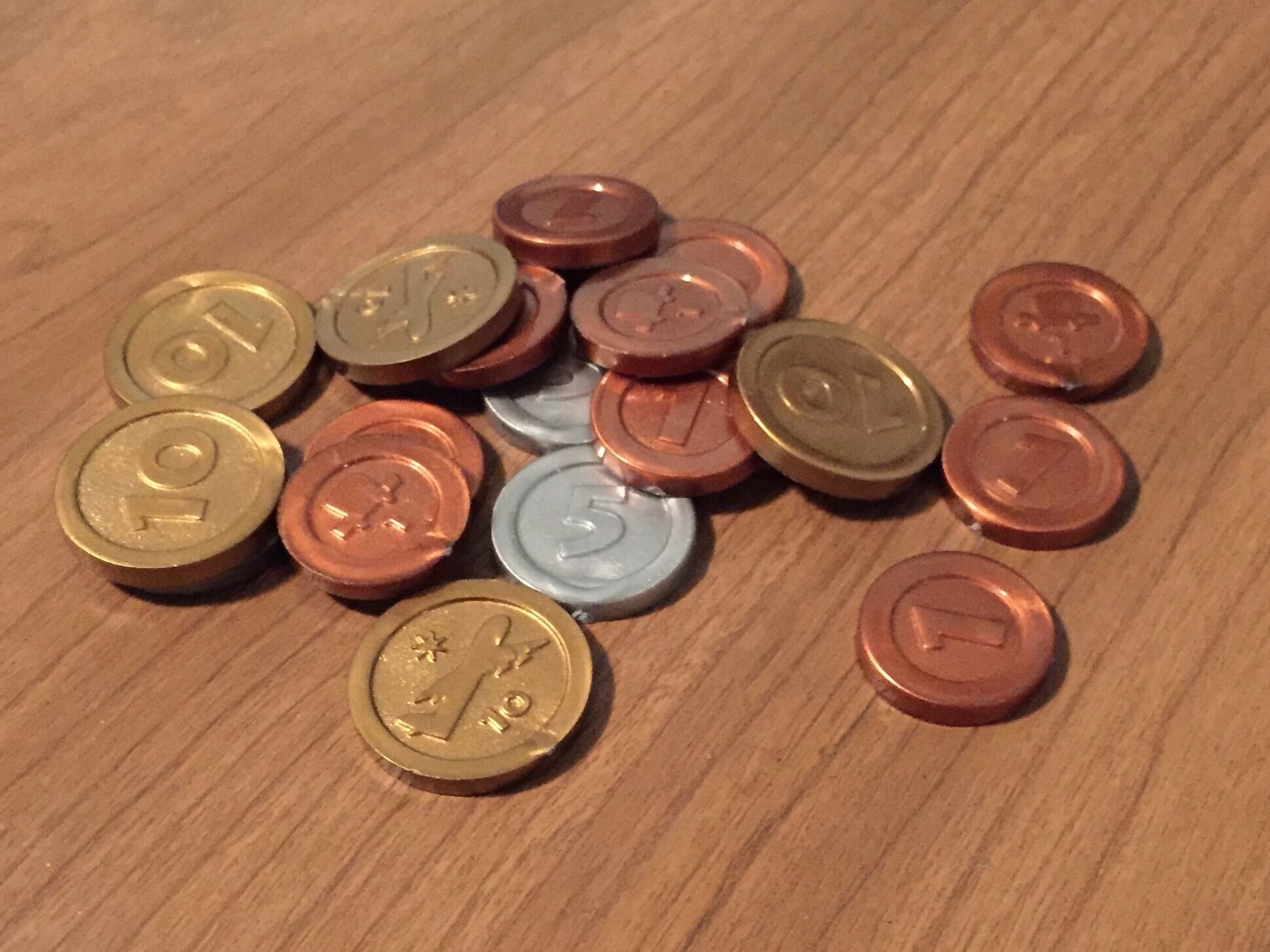 Besides the new Landmarks, players can look forward to adding new elements every game, including new establishments, new rules, new components, and new side-boards that after just a few games truly make Machi Koro Legacy look like a totally different game than the original. But the core loop of building up your city and getting more and more coins each turn is exactly the same as the original.

And that’s the problem. They added a lot of cool stuff that makes the game more fun, but they didn’t touch the main gameplay, which, while I like it, feels somewhat broken. You can still load up on as many Wheat Fields (Blue cards that activate on a 1 die roll) and then grab high-end Convenience Stores that activate on 11-12, and usually come out on top. It sounds high-risk high-reward, but three out of the first five games I won in a landslide with this strategy. Especially with a lower player count, you can potentially rake in 30-40 coins in one turn, an absurd amount. 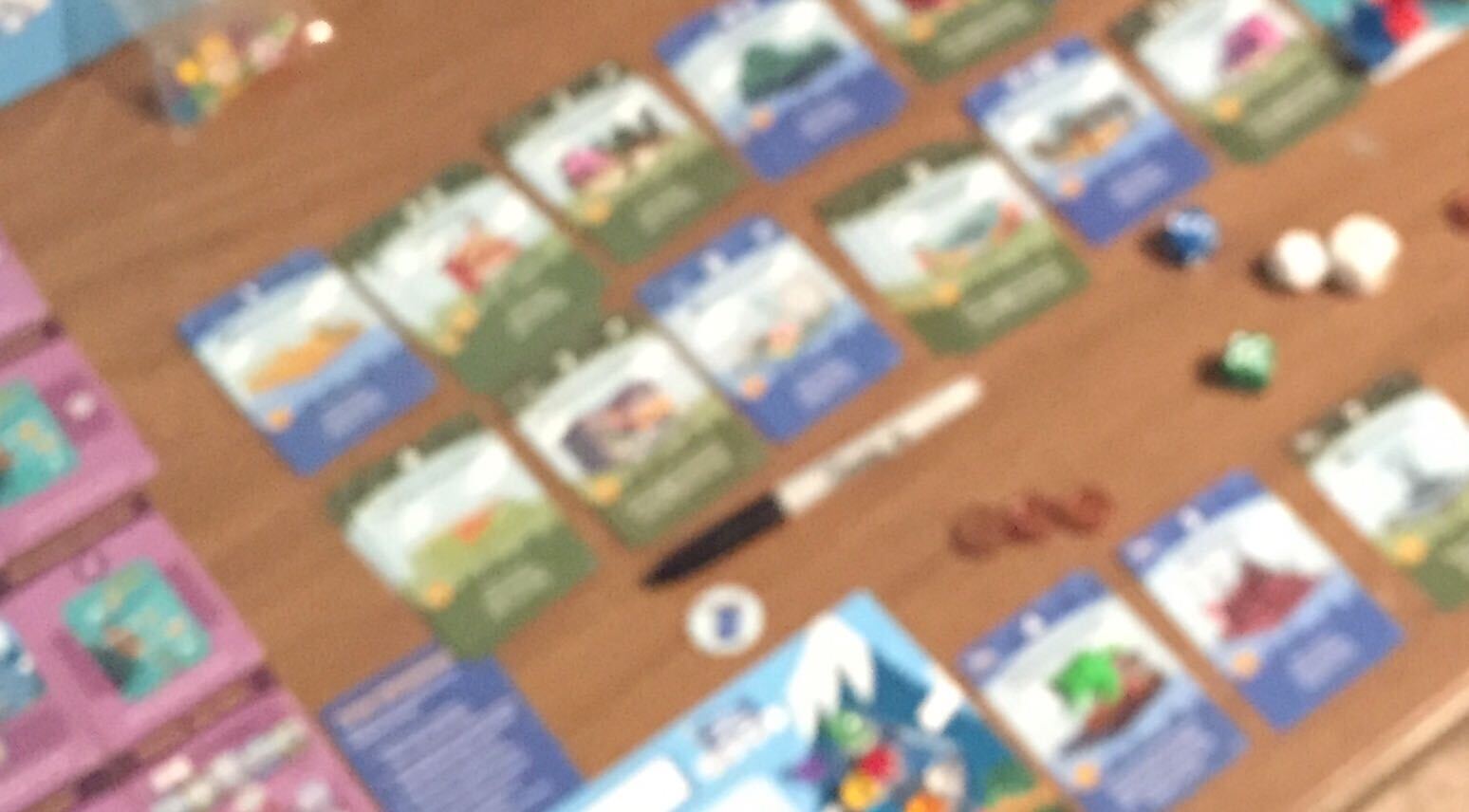 Do not attempt to adjust your screen. This blurry photo is free of spoilers.

So who would Machi Koro Legacy appeal to? I would be hard-pressed to tell someone who didn’t like or only mildly enjoyed the original that they needed to run out and get it, since the legacy elements are more akin to body upgrades on a car with the same engine. Really this game is for someone who wanted to play Machi Koro but never bought it, and isn’t sure which game or set of expansions to get. This would be a good place to start for them, or for younger players or families who aren’t going to notice or care how easy it is to “game” the market. Veteran gamers or folks with limited shelf space may wish to look elsewhere.

Machi Koro Legacy is for someone who wanted to play the original Machi Koro but never bought it, and isn’t sure which game or set of expansions to get.