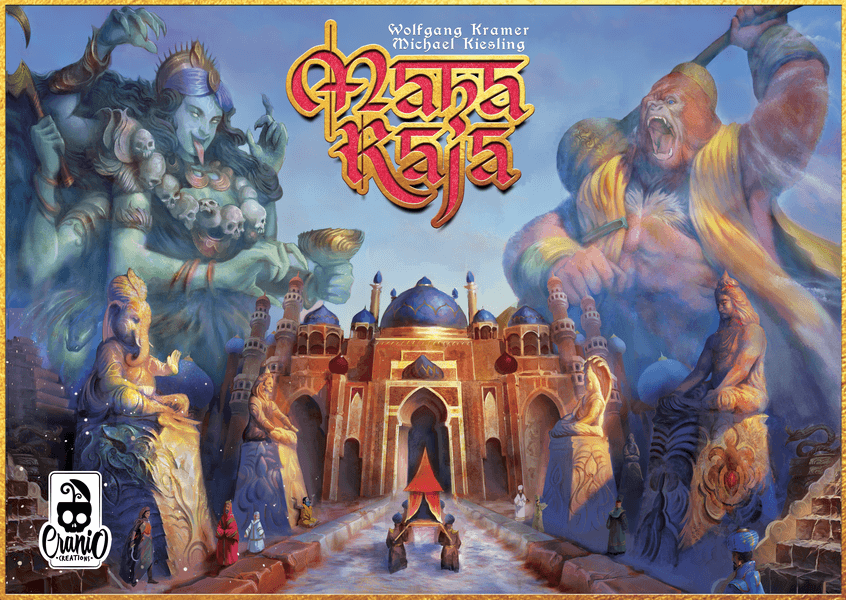 Originally released in 2004, Maharaja: The Game of Palace Building in India is a game by superstar designers Wolfgang Kramer and Michael Kiesling. After being out-of-print for many years, this game is returning in an all-new version from Cranio Creations. How does it hold up after 17 years? Let’s take a look.

It’s no secret that I love games from Wolfgang Kramer and Michael Kiesling. In the past, I owned the original Maharaja for many years played it many times. It is a very good game (spoilers for my overall review, I guess), though one that I did eventually part with during a collection culling for reasons I will discuss later. When I heard it was being re-released, I was excited to check out the new version.

In this game, players compete to build travel routes, statues, and shrines around India in hopes of gaining the favor of the noble Maharaja. The game is played on a large map board, consisting of 7 cities connected by roads. Each road features 2 villages where shrines can be placed. All players have a priest marker in their color, which they will move about the map as they visit different locations. All priests start on a central space. 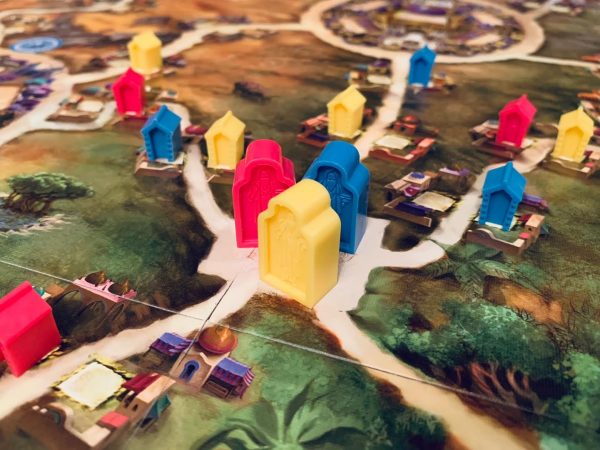 Priests on the starting space, with shrines in the surrounding villages.

Before the first turn, each player places 4 shrines in villages around the board. Throughout the game, players will move their priests from city to city, visiting village shrines along the way; a road that does not have shrines in both of its villages cannot be traveled.

If a player owns a shrine in a village, they may freely pass through that village at any time. However, if the only shrines in a village belong to opponents, the player must pay each of those opponents in order to pass through. 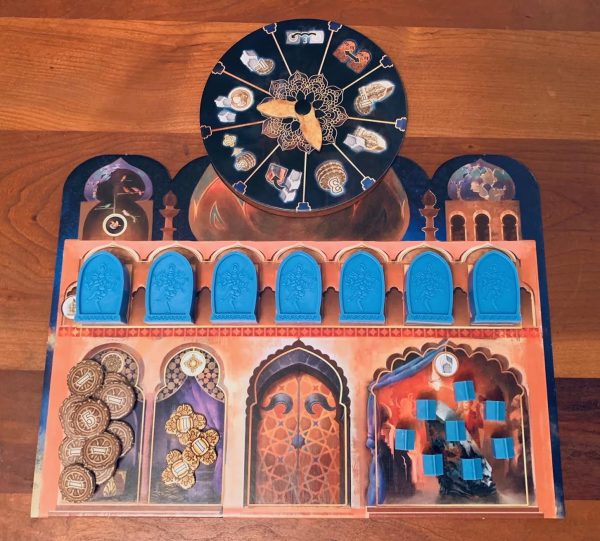 In every round of the game, the Maharaja (gray figure) visits a different city; his current city is scored at the end of each round. In preparation for his visit, each player secretly selects 2 actions to execute. Actions are selected using dials. 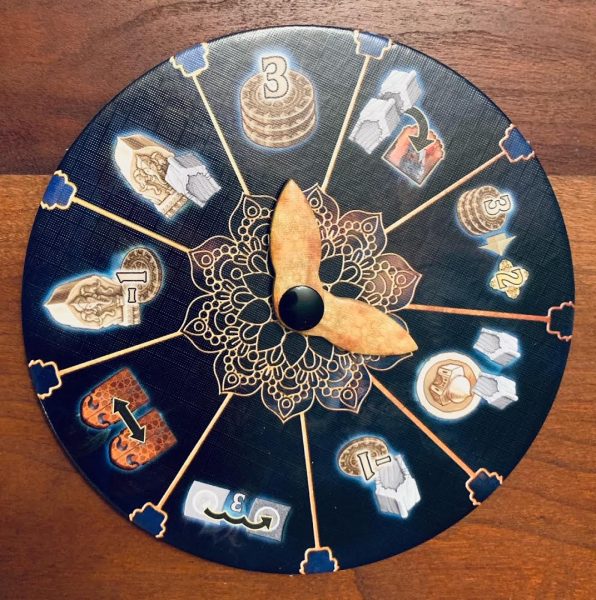 The available actions are: 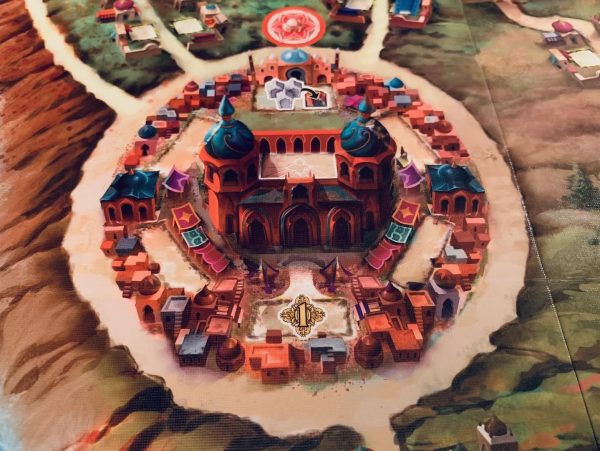 Each city bears 7 statue spaces. The 6 around the outside cost 10 coins each, and the center space costs 12. Players can also build shrines in the city; they are simply placed along the outer ring.

The tokens on the Maharaja track determine where he will move in the coming rounds.

Building statues and shrines is the crux of the game. It is the primary way for players to earn points. After all players have carried out their actions, the Maharaja’s current city is scored. To do this, players check to see who has the most influence in the city: 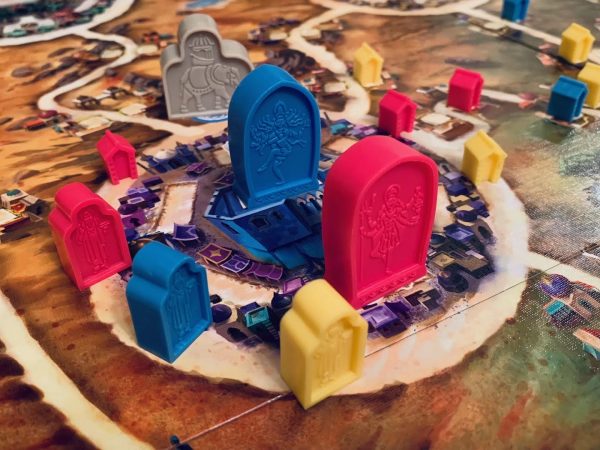 Coins are then awarded based on influence ranking. (Ties go to the player with the lower-numbered role.) The payouts scale depending upon the number of players: 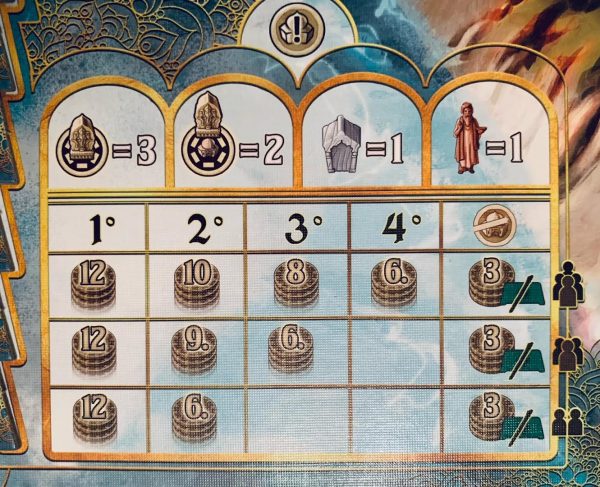 To continue the above example, red would earn 12 coins, blue would earn 9, and yellow would earn 6.

Each player present in the city also earns a special reward tile (a change from the original version of the game).

The Maharaja then moves to his next city and another round takes place. The game continues until either the 7th round, or until the round in which a player builds their last statue. When either of these things happens, the game ends. Postgame points are then awarded for statues on the board, coins in players’ supply, and city majorities. The player with the most points wins!

At the start of this review, I mentioned that I had previously culled my copy of the original Maharaja. While I very much enjoyed the game, it had a single issue that seemed trivial but was actually very significant: the ratio of statue values. In the original version, a statue in the center of a city was worth 3 influence, but the statues around the outside were only worth 1 each (instead of 2 like in this new version).

In practice, this almost always meant that the first person to reach the Maharaja’s city – usually the first player in turn order – would grab the center space and therefore wind up with the most influence at the end of the round. This in turn meant that they would get the most coins, so they would have extra spending power in the next round, and so on and so on. In other words, the original edition had a “rich get richer” runaway leader problem.

The simple tweak of making the outer statues worth 2 influence instead of 1 makes all the difference in the world. Players are still incentivized to claim central spaces quickly, but it doesn’t feel like a lost cause if they can’t. By earning 2 points to an opponent’s 3, rather than only 1, players still feel like they can compete if someone else gets an early lead.

There are several other changes/additions in the 2021 version of Maharaja. Most notably, there are far more character roles included in this edition, 16 in total. This gives the game lots of replay value, as players can mix and match characters to see how their powers interact. The reward tokens are another new addition, as are the statue spaces with bonuses on them. None of these changes fundamentally alter the feel of game, but they give it some extra versatility.

The production quality of the new edition is nice, with a gigantic board and over 100 plastic pieces. The only issue – and it’s a silly one – is that the action dials don’t fit in their designated spaces atop the player boards. 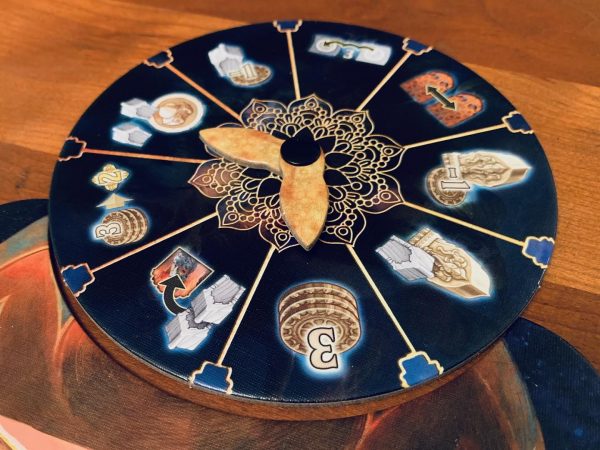 As you can see in the image above, the arc where the dials are supposed to sit is a hair too small, which creates an awkward gap. Obviously, this doesn’t affect gameplay in any way, but it will drive perfectionists crazy, guaranteed. Besides this issue, however, I have no other criticisms of the production.

Overall, I am delighted to see Maharaja back in print, especially with a bit of fine-tuning. Now that a shiny new version of this classic is on store shelves, I hope that a whole new generation of gamers can check it out!

Smoothing out some of the rough edges of the original version, the new edition of Maharaja is great and the game still holds up today.