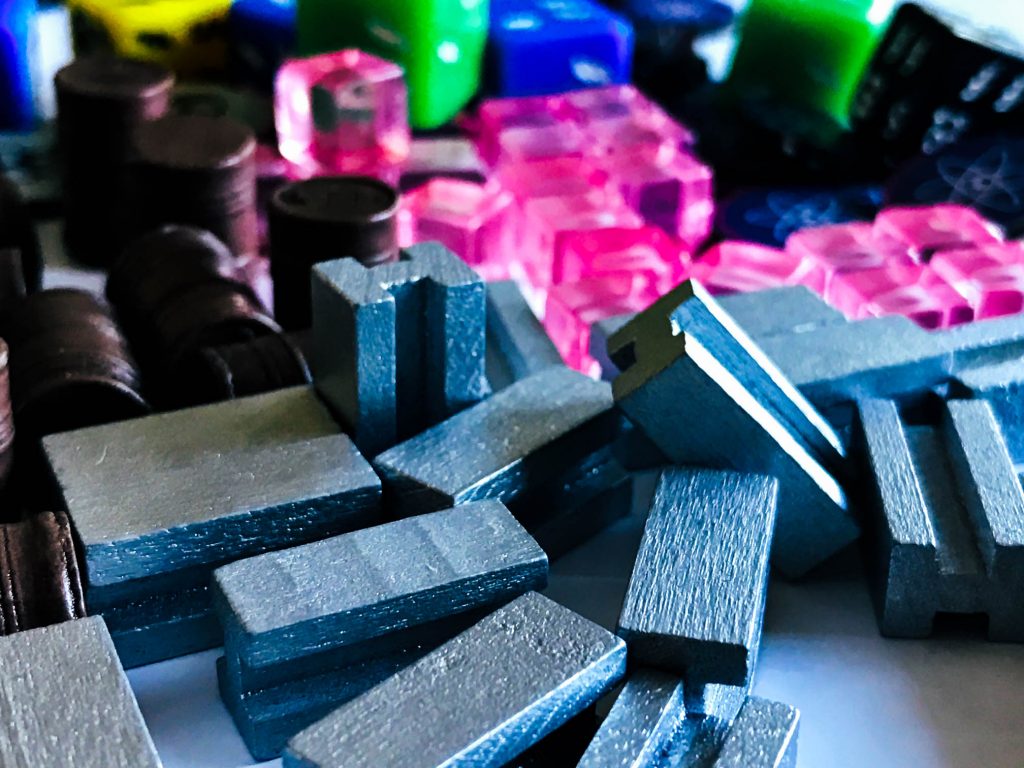 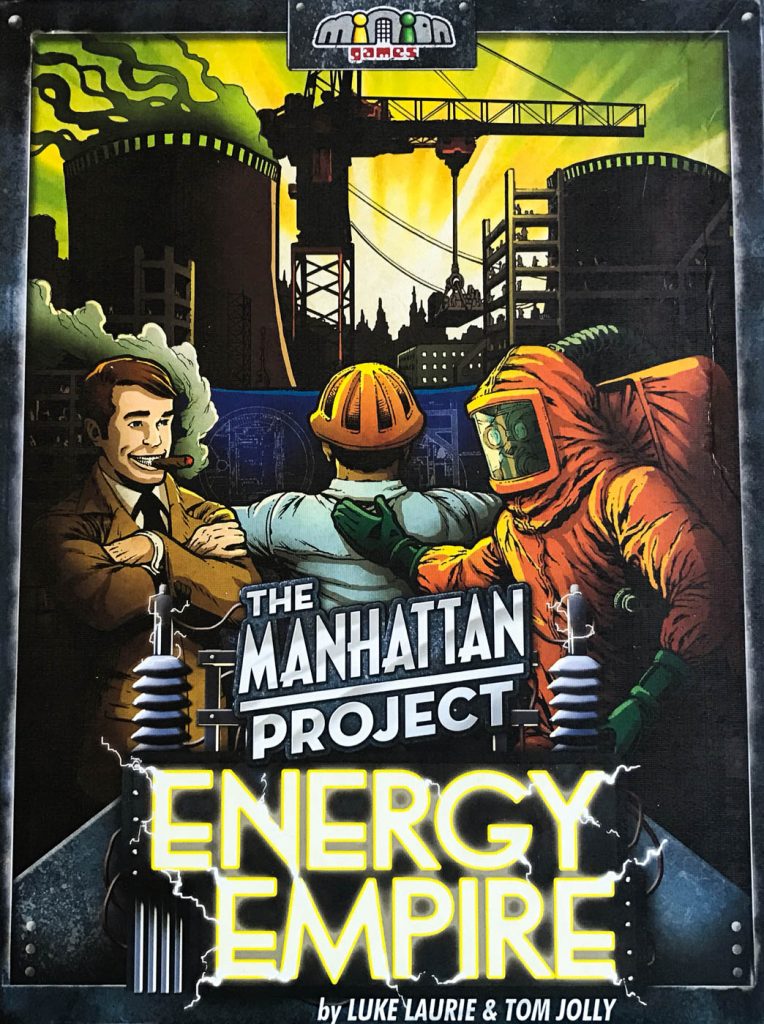 Manhattan Project: Energy Empire is the followup to the 2012 worker placement title, Manhattan Project. Both published by Minion Games, the original was designed by Brandon Tibbetts and had players controlling nations bent towards creating bigger and better bombs. Players would spy on each other, defend with military, and create bomb infrastructure. Brandon is also at work on The Manhattan Project 2: Minutes to Midnight.

In 2016, Minion Games launched the Kickstarter for Manhattan Project: Energy Empire, which featured designers Tom Jolly (Wiz-War, Warhammer: Diskwars, Stellar Conflict) and Luke Laurie (Stones of Fate). Energy Empire funded quickly and has been lauded by many gaming critics since the Kickstarter success. 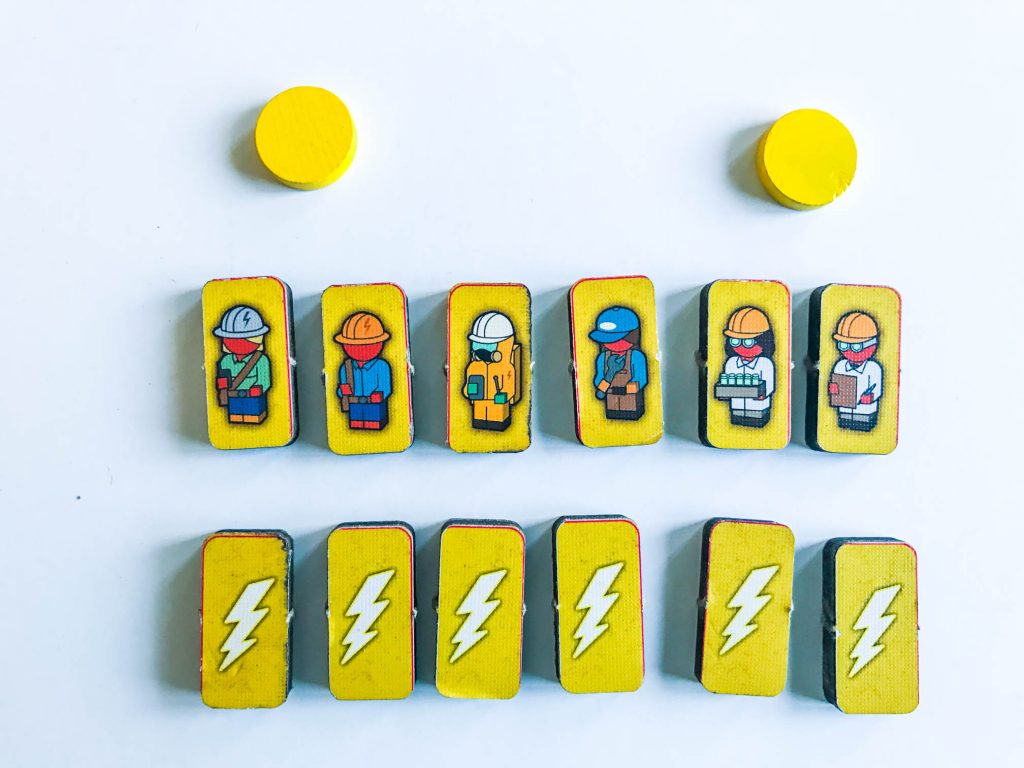 Manhattan Project: Energy Empire is not suggestive in any way, but makes a good and subtle case that all nations (not one in particular) have been responsible for worldwide pollution in their efforts to become world powers. 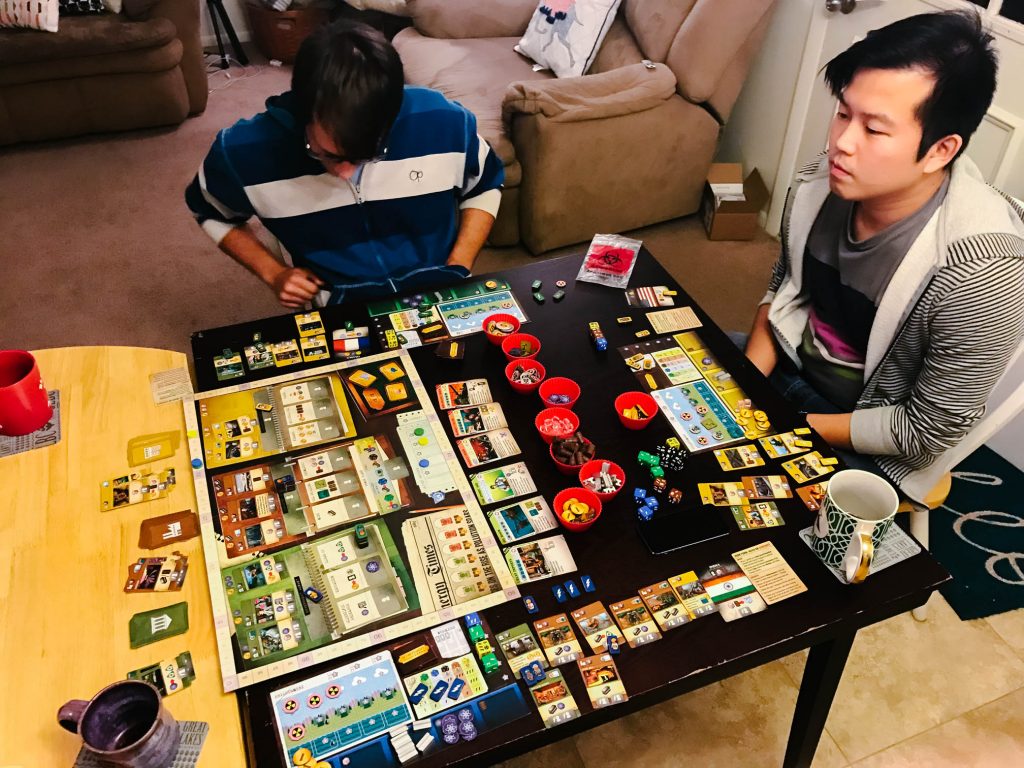 The other day I was polishing my kindergarten homeschool soccer league trophy when my wife mused, “Chris, do you remember back when we were young and you used to dream about becoming a national super power, destined for commanding supplies of steel and plastic, and bribing your way into becoming a force of nature in the United Nations?” All was still in the room as I pondered her question.

Close to breaking the silence with my response, I was interrupted by three sharp raps on our front door. I flung it open to reveal an older gentleman, slender in figure, arms longer than his legs, that type of thing. Placing his old man cane between his right armpit, he produced a brown box from beneath his black bomber, handing it to me. Nearly to the point of chagrin at the strange sight before me, he whispered, “Your childhood dreams will now come true.”

I blinked from surprise, and he was gone. 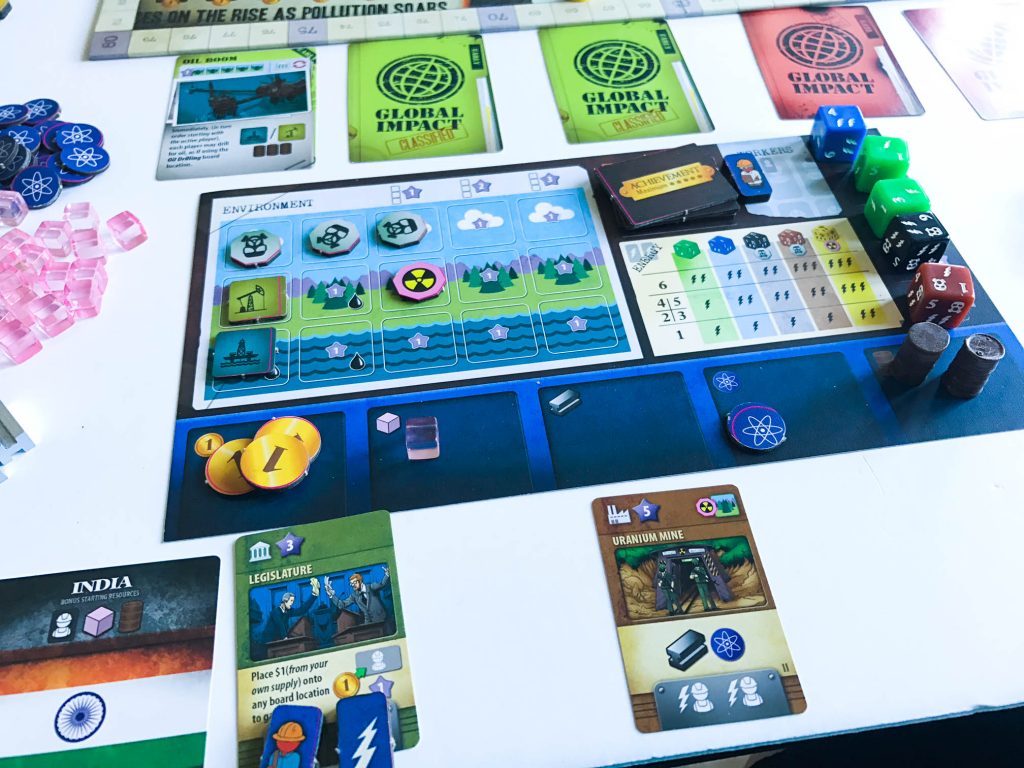 Manhattan Project: Energy Empire is a worker placement game where players simulate the rise of worldwide industry post WWII, which would inevitably cause pollution and environmental destruction on an international scale.

Each player can choose one of two actions on their turn: Place a worker/activate a structure, or generate.

In front of each player’s tableau is a magnificent, thin board, depicting roughly 10-12 possible actions they might take. These actions are split into government, industrial, and commercial sectors. By placing a worker onto an action space, the player will be able to take the associated action with it. These actions do things like: you take 1 steel resource, or pay 3 gold for one extra worker and a pollution, or you take 3 gold and every other player gets 1 gold. They also allow you to clean up pollution in your environment, purchase a government/commercial/industrial structure, or spend resources to buy another energy die. 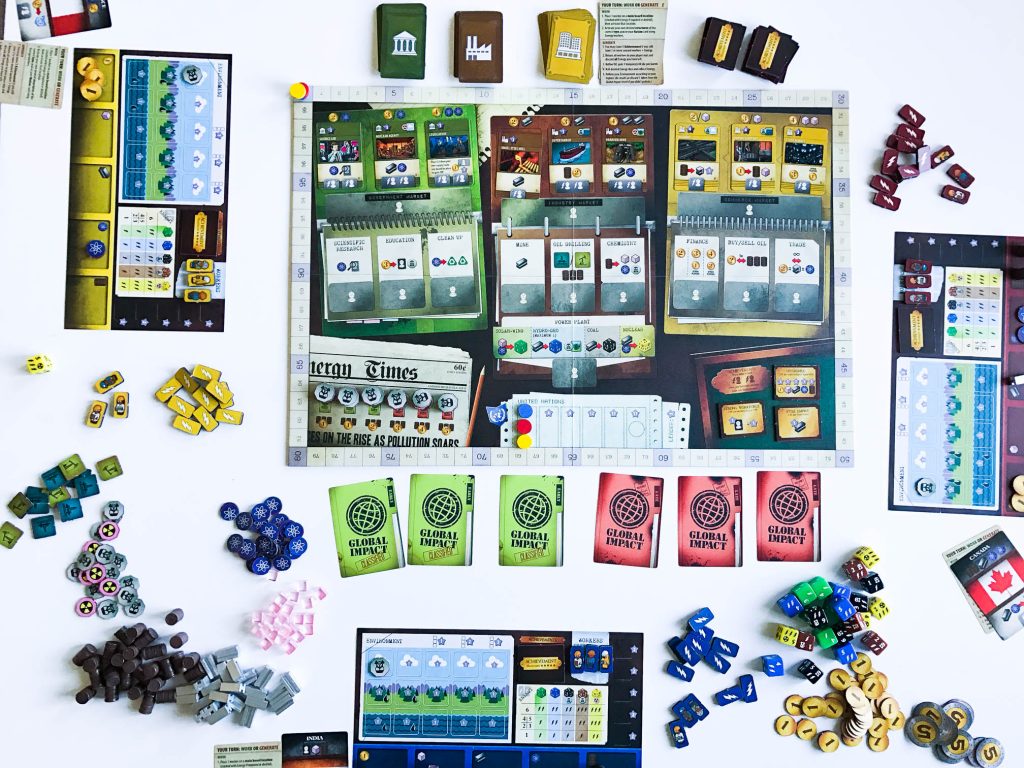 Look upon the board: the left green is government, the middle brown is industrial, and the right yellow is commercial.

Notice again the three different sectors. If a player owns a structure, and also plays a worker in the same sector as that structure, they can spend an additional worker/energy on that structure to activate its ability. In addition, not only can you chain together structure abilities (seeing as you can activate as many in the sector as you can afford) these structures also offer victory points at the end of the game.

If a player is out of workers and energy, they may choose to generate on their turn. By doing so, the player will collect their workers, discard energy, maybe spend oil to receive more dice to roll, and finally roll all of their dice. This mechanism brings your workers back, gives you energy based on your die rolls, and also gives you pollution.

Most games, specifically worker placement titles, thrive off rounds, but Energy Empire puts time limit in the hands of the players. See, every time an action or dice tells you to take pollution (even structures give pollution) players must take a pollution from a track and place it into their environment. Every so often, one of these tracks is emptied, which results in flipping over one of six global impact cards.

Simulating the crash of various markets, or industrial booms, these global impact cards can do a lot to the game. Upon drawing a card, players will reset a structure market and score points on a specified row on their environmental tableaus. Players will lose out on points if they have too much pollution. In addition to the scoring and reset, each card enacts a global effect. This might give players extra chances at resources, or they might restrict board placement and make life potentially miserable.

There are a lot of other extremely interesting mechanics happening in Energy Empire, but the review would run far too long to go into detail, so I’ll hit them briefly. 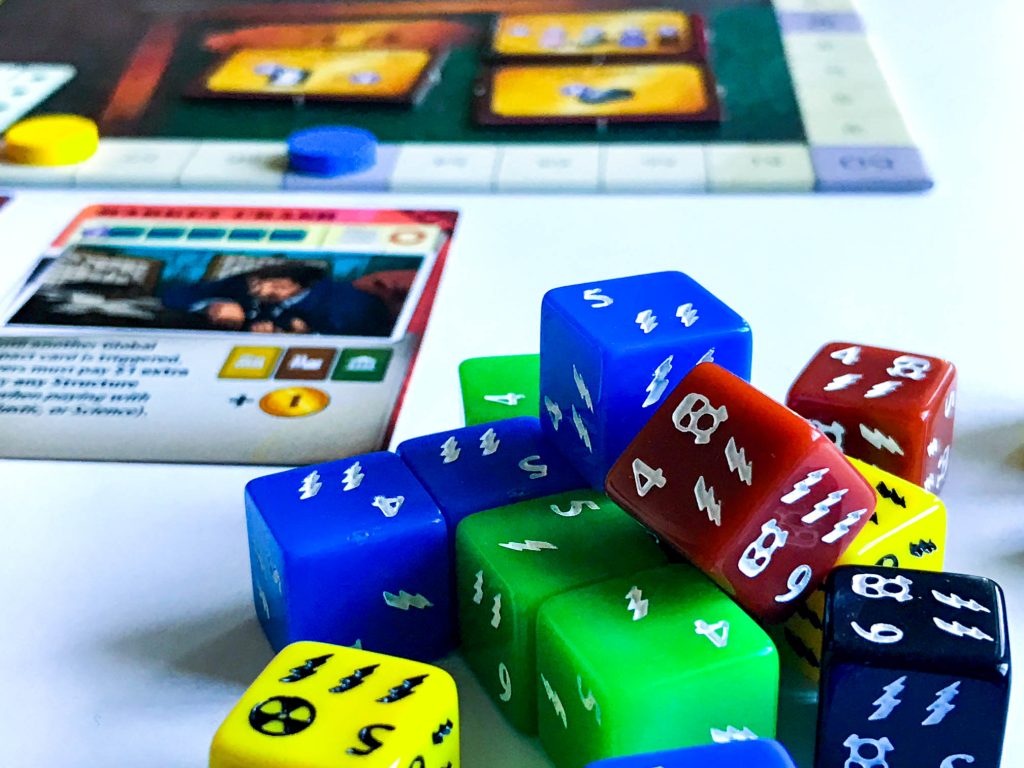 These die determine how much energy you gather, alongside if you gain pollution.

The game continues until the last pollution chit is taken from the track, at which point each player gets one final turn. Players tally up points from their rank in the United Nations, achievements, structures, and how clean their environment is. The player with the most victory points is the winner.

Now, normally I would talk about component quality and artwork at this point in a review, but I’d like to cut the crap immediately. Hint: This game is incredible.

I should have known when I first read the rulebook. Minion Games has done an exceptional job at perfectly designing an understanding of how to play their game. Please, publishers, take notice. The graphic design in this book is not clunky. It makes sense. Each rule is succinct without unnecessary fluff. Each section is laid out, withholding just a bit of information, because you won’t understand certain game mechanics until later in the book. It’s wonderful. I normally slog through rulebooks, but this one was a charming pleasure to behold.

Some people are cut out for learning and teaching rules, and some people need a lot of experience. I’m the latter, so I normally dread figuring these things out, mostly because I’m afraid I’ll stupify my listeners and scare them before they even take their first turn. Upon teaching this to my first group, I was told my rules explanation made a lot of sense, and the game was made incredibly simple to them. This caused rejoicing and I give Minion Games all the credit. 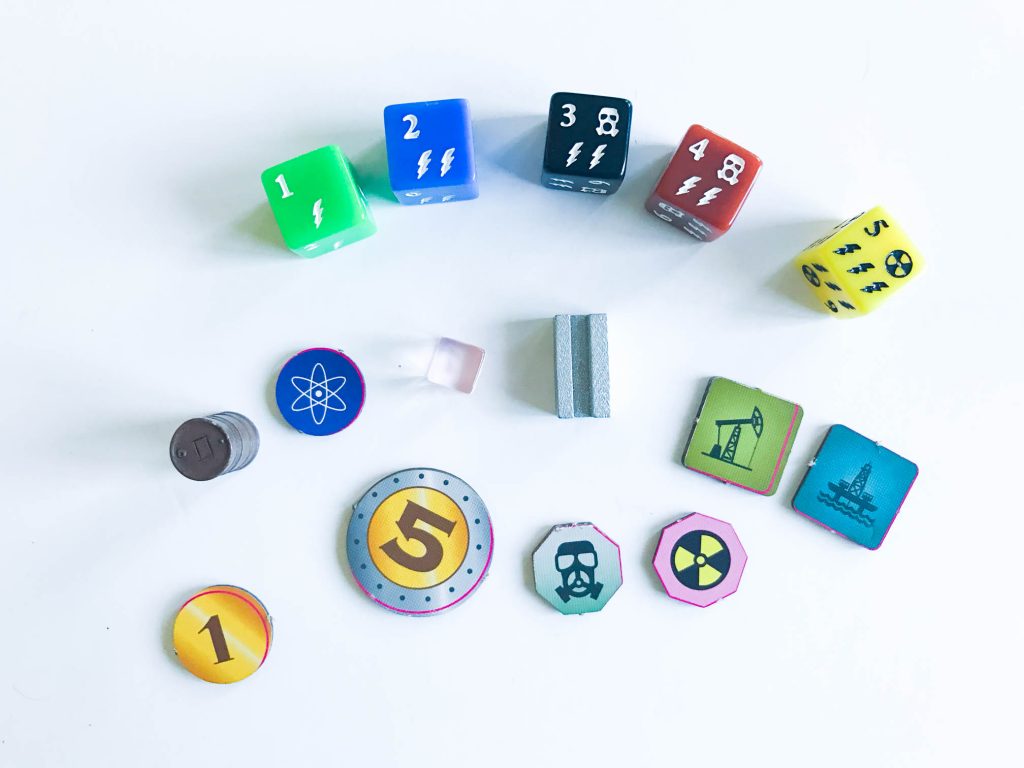 Seriously, these components are absolute quality.

Okay, I’ve blathered about rules, but now I must rant on components. Hint: Top notch.

The box has a lovely weight to it. The board art is nice. It’s not messy, and the graphic design is clear. Each card has a nice feel to it. Art across the board (punny) is intentional, fun, and concise. From the precious worker chunks, to the heavy oil drums, everything is well produced and is a pleasure to hold and push around the table. The plastic bits are cubey bits. The oil drums are dense and cold. The steel resources are… well… wooden. But you get the idea: everything is excellent.

Of course, what does any of this nonsense matter if the game doesn’t play well? Hint: It can’t help but play well.

Every single decision may not feel meaningful, until suddenly you are caught in the throes of your own foolish mistakes. Too many turns wasted getting gold, when you really only needed three. You might get greedy and spend extra energy activating your gold gaining commercial structures, but now you’ve missed out on cleaning up your pollution. Maybe you need to buy that expensive government building before it resets from the upcoming global impact card.

Okay, now do you believe the components are amazing?

It’s so important to keep your environment clean because over the course of the game, each global impact card can pay out five points. That’s potentially 30 points, which is more than you can gain through achievements (max: 25 points). Furthermore, the end game can pay additional points for keeping specified columns clean. In order to clean up, you have to use the clean up space… But what if someone else’s worker is already there?

These will reset when players choose to generate, but this allows for players to increase the cost on action spaces of their choice, making it difficult for someone else to utilize a highly contested action. Effectively, you could force someone to generate one or two turns earlier than they planned to because of your naughtiness. Hint: Energy Empire encourages you to play mean and naughty-like. 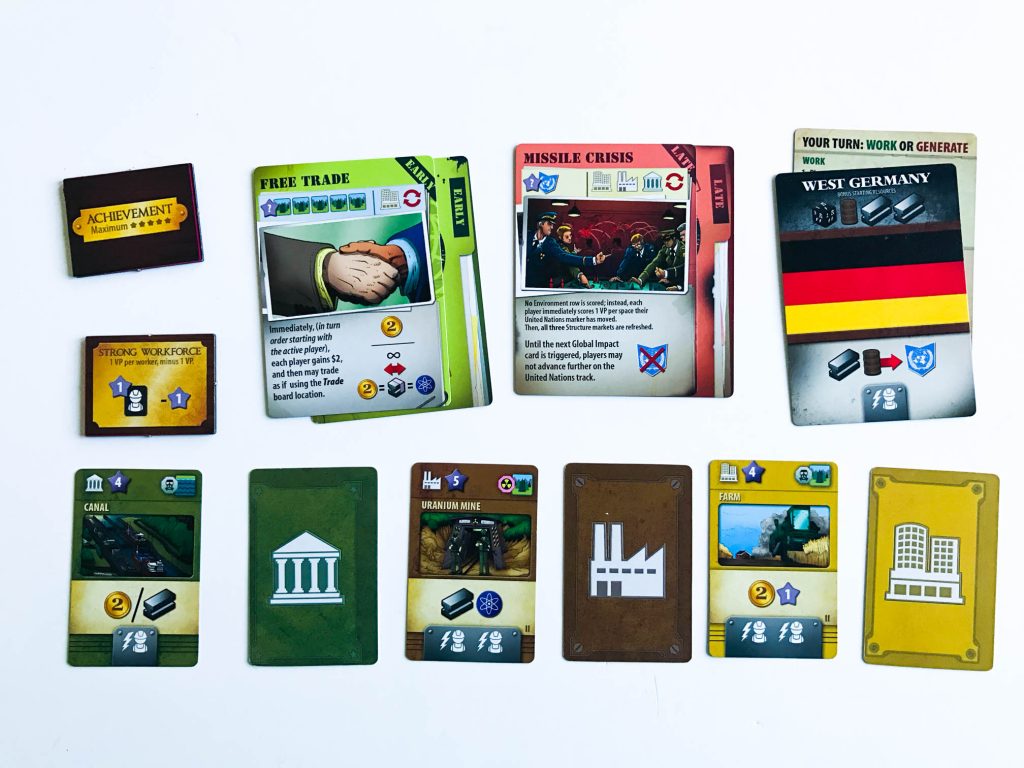 These are the kinds of cards that will determine your destiny in the power struggle.

All of these mechanics working together in this mechanical symphony allows for incredibly complex, yet exceedingly simple engine-building. You play a worker to trade some oil drums in, which gives you three gold, which lets you activate a structure that lets you buy a plastic for one gold, which lets you activate another structure that lets you exchange a plastic for a steel and a science chit, which lets you spend an energy and the aforementioned resources to activate your United Nations card, which moves you up the track by one point.

Excuse the run-on sentence, but the chain reaction is too good to ignore.

You feel so proud of your engine-building achievements. How can you not? You didn’t do it all over ten turns, you did all of that nonsense in one turn, and it’s so exciting. It feels as if you had well-tuned your machines to all trigger at the same time, like the well-oiled machine your nation has become. Sure, you churn out pollution and oil rigs, but it’s necessary, and can be cleaned up by another reaction of your government structure’s next turn.

All of this excitement is what makes Energy Empire a maddening success for Minion Games. 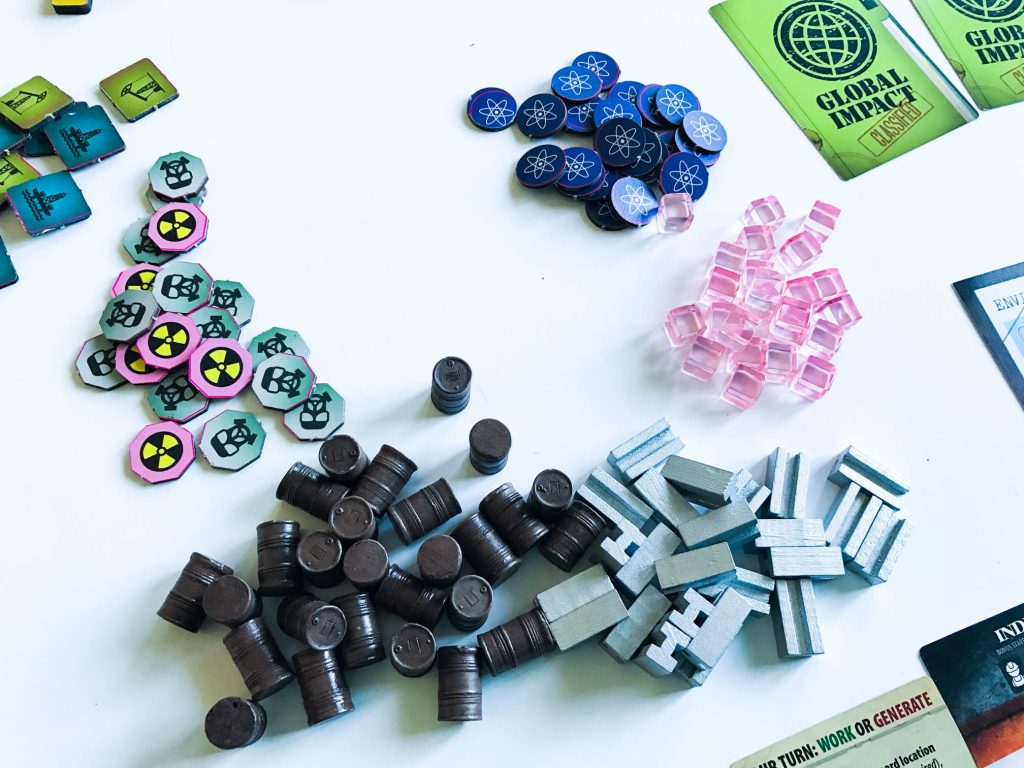 Normally, I also like to include criticism throughout a review, but to be honest, Energy Empire seems unable to make any silly mistakes. There is an example of power creep with some strange structures that show up, which are clearly worse than others. The overall strategy isn’t completely apparent until a quarter of the way through the game, but pending a great rules explanation, this shouldn’t even be an issue.

I can’t do anything but recommend Manhattan Project: Energy Empire to the masses. No game I’ve played looks as slick as this one, teaches as easily as it does, and plays so mechanically beautifully. Yes, yes, I’ve played loads of games and worker placement titles, but something about Energy Empire stands so tall and cleanly above the stack of the rest of them.

No, this isn’t the greatest game of all time, but it’s an amazing worker placement game. I must stress how good it is because I’d be doing all readers a disservice to discredit how wonderful it plays. This is an excellent title that absolutely deserves a place on your shelf. It should be releasing at the end of October or the beginning of November.

Find it. Buy it. Do it because the thrown-together old codger with a cane in his armpit asked you to. 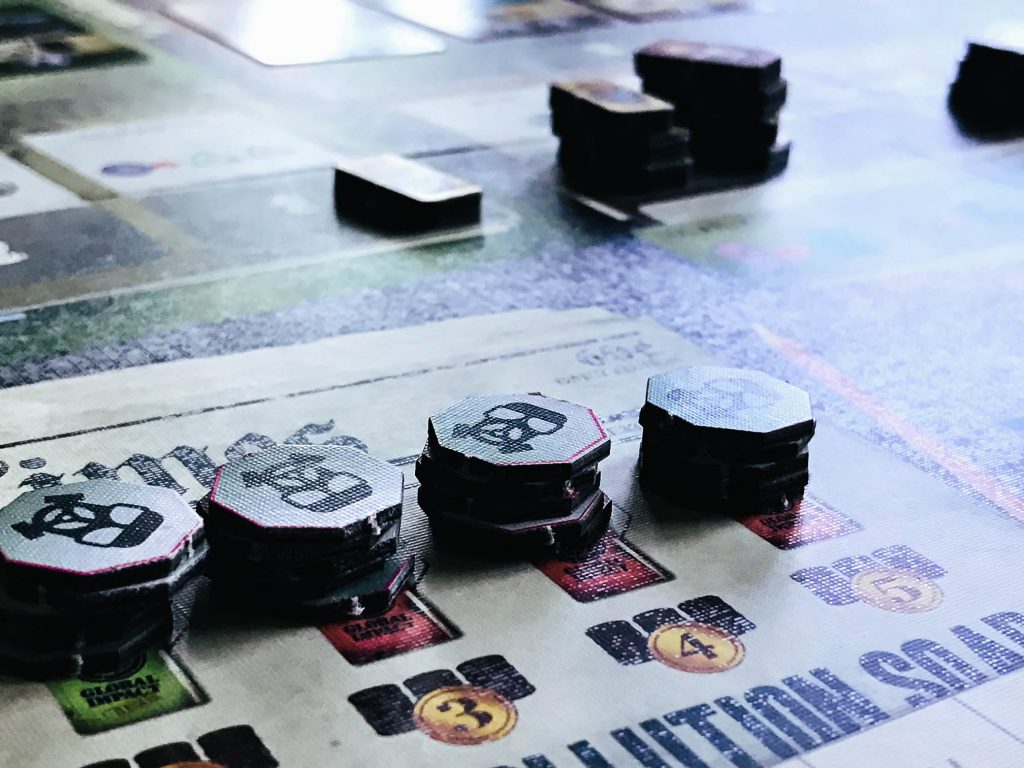 Manhattan Project: Energy Empire is a fun worker-placement title with tons of exciting engine-building and interesting game mechanics. Play is exciting at every player count while boasting amazing art and components and an incredibly well-written rulebook.