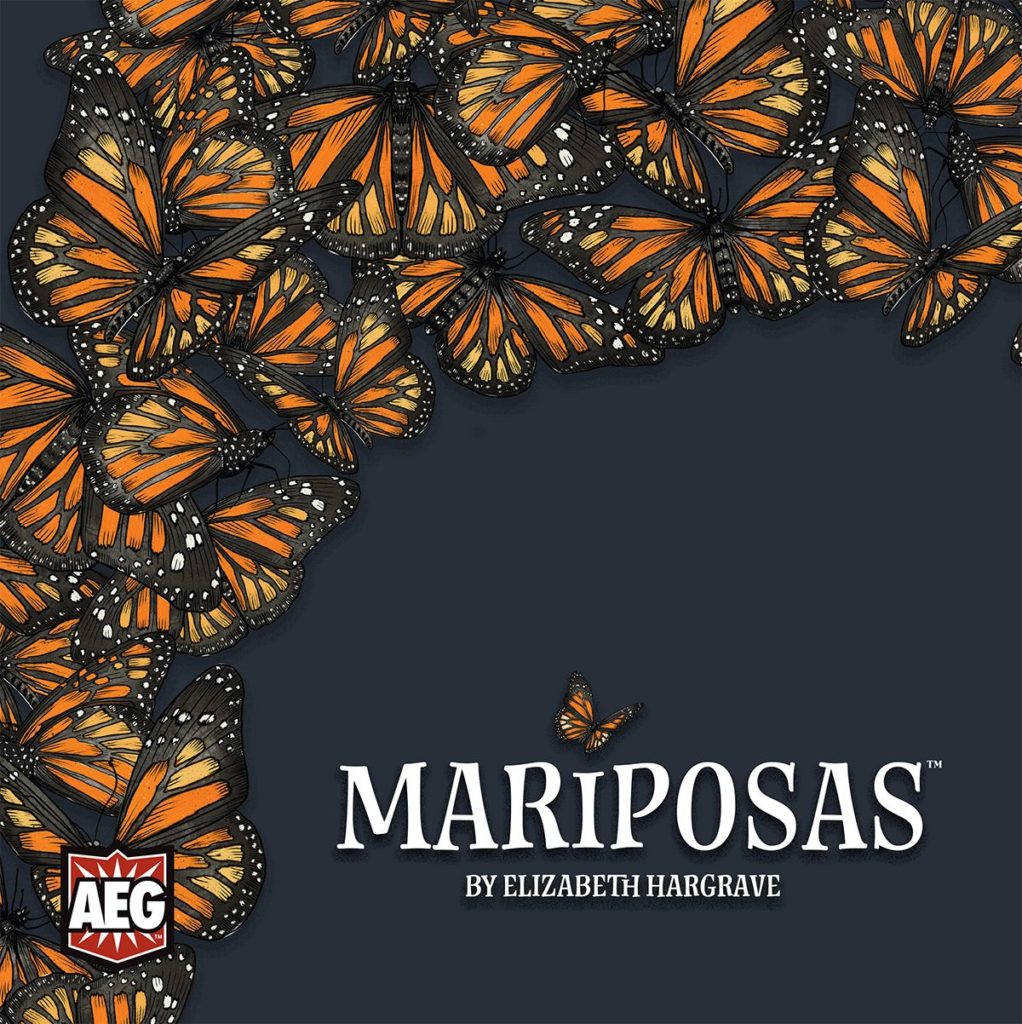 Every now and then, a board game designer is able to deliver a smash success early in their career. Elizabeth Hargrave’s Wingspan is one of the most successful board games of the last few years, and players have been eagerly awaiting her next big box game, Mariposas. This time, the flying creatures are butterflies instead of birds; players move butterflies around on a map of the eastern U.S. and Mexico to emulate their annual migration. It’s much simpler and lighter than Wingspan, but does that matter? Let’s look! 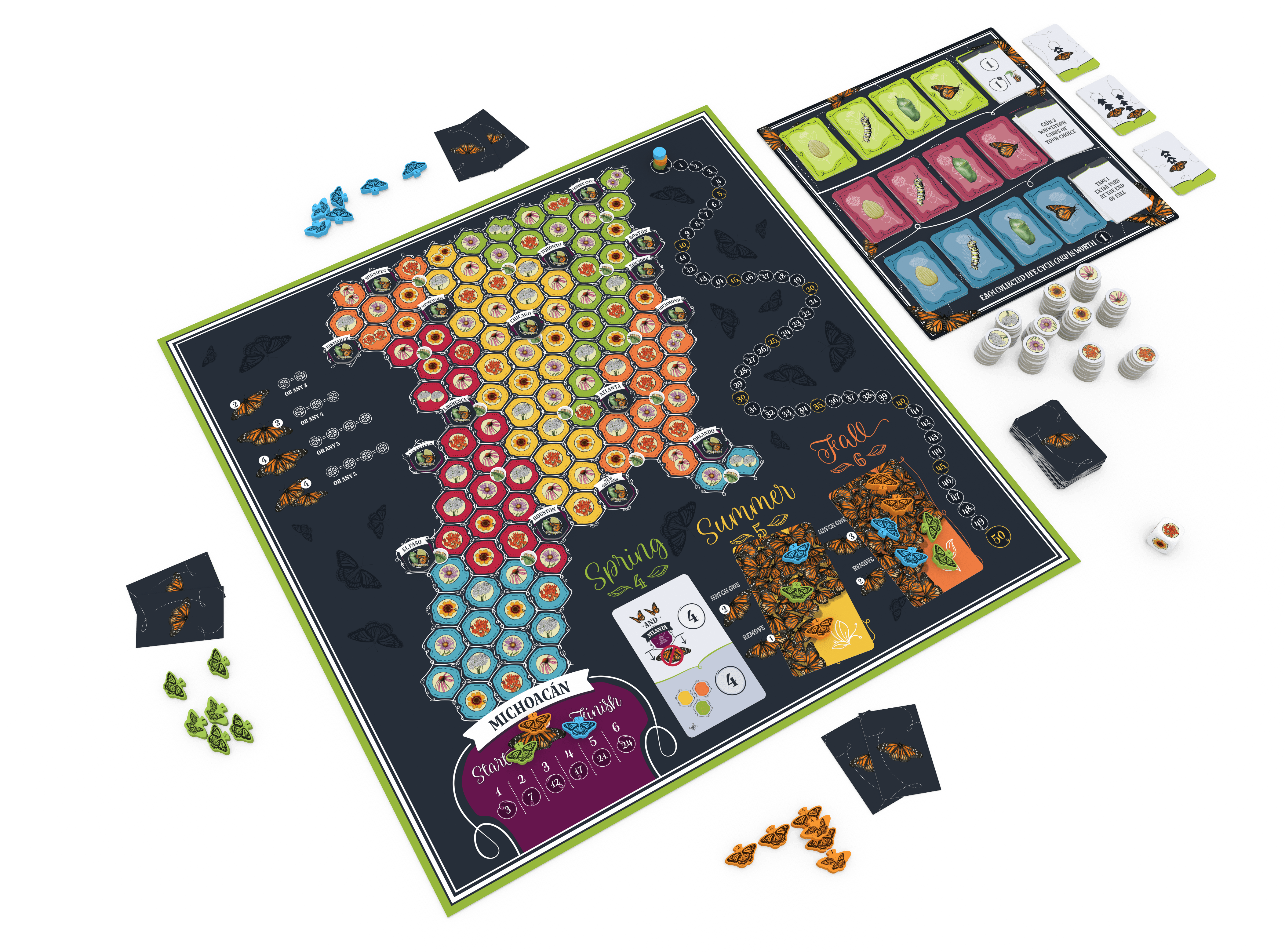 To immediately dismiss the comparison I just brought up, I find Wingspan to be a good-but-not-great game, despite belonging to my favorite genre (deck/tableau builders). Other than the designer, Mariposas is an entirely different game aimed at a broader audience.

However, what both games do have in common is a publisher committed to making the game attractive. I absolutely love the box cover of Mariposas, and most of the pieces are pretty and functional. I was also really impressed that it came with five fairly nice plastic containers for the flower tokens, and that it’s priced so aggressively at $44.99 MSRP. Unfortunately, the board is far too busy and not as attractive as they clearly wanted it to be. The main problem is that the flower token icons have this pale yellow backdrop that clutters up the board, and it looks especially hideous against the yellow region. If the flower icons had no background beyond the color of the hex, the game would look far better.

The components are certainly functional in the sense that iconography is clear: unsurprisingly so, since there is very little going on in this game. A player chooses one of two cards to play, and moves some butterflies. Primarily you are collecting flower tokens so that you can hatch new butterflies, as your old butterflies are continuously leaving the board (dying off). A few places allow you to collect sets of cards to get a bonus ability and some extra points; if you arrive first, you roll a die to get a bonus flower token, but you also have no idea what you’re going to get if you arrive first (the tokens begin face-down). Other than that, there is no player interaction at all.

So you can score points from set collection, but the two main ways to score points are the mid-game scoring cards, and getting your butterflies back to Michoacán by the end of the game. The scoring cards are a nice idea, reminiscent of Kingdom Builder, but it’s not like you can forego one and work on the others, because they are revealed only at the change of seasons or if players get enough of their corresponding butterflies out early. While this is somewhat thematic in the way it emulates the changing seasons, it makes long-term strategy difficult: the game tells you to do something, so you better do it, without knowing what else you might need to do later.

Recently, by pure coincidence, I also played the game Luxor, which has a surprising number of similarities: choose one of two cards for movement, manipulate several pawns and get them in the right places for points, set collection for bonus points, occasionally grab special movement cards, and so on. While Luxor is about the same complexity, I found it a much more interesting game, and I think the two main reasons are the player interaction and the strategic possibilities. In Luxor, landing on certain tiles changes the landscape for other players, and the set collection is first-come-first-serve. I find the lack of any kind of scarcity in the set collection of Mariposas very strange. Additionally, the mechanism in Luxor where players have 5 cards but only play the leftmost or rightmost card allows for some future planning as cards are added to your hand; you are shooting in the dark in Mariposas other than the ability to discard cards if your two cards are identical. And of course, Luxor tells you up front all the ways to score points.

My point in such a comparison is this: there are a lot of simple ways that Mariposas’ mechanisms could have been a lot more interesting than they are. Several of the mechanisms are used in different ways than “tradition”, but these new ways actively make the game worse. It seems that in her attempt to make a relaxed game that anyone can play, Ms. Hargrave also erased the excitement that those mechanisms can bring.

Thank you to AEG for providing a review copy of Mariposas.

Mariposas delivers a unique theme, but there's nothing else to get excited about here.