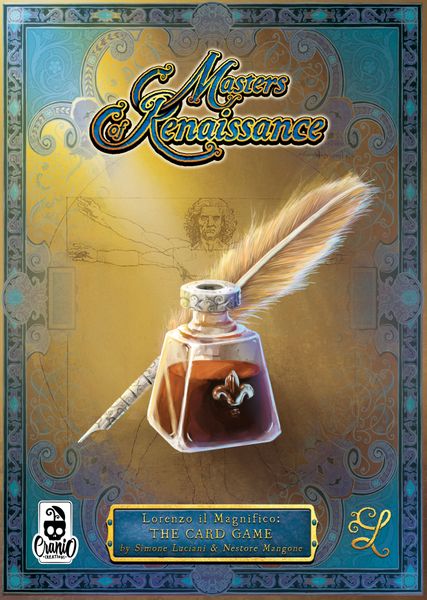 In Masters of Renaissance, players will gain resources from the market, and attempt to use them to purchase development cards and play leader cards all while showing their devotion to the Pope (and trying to earn the most points). See if your faith was strong and your planning molto bene!

Faith in Masters is a resources you can gain from the market. You can’t lose it, but it can feel odd at times to earn it alongside coins, stones, servants, and shields. At different checkpoints, players will be awarded extra victory points for having moved their faith marker (a small red cross) far enough; players who have not reached a certain limit will not get these extra points. In solo mode, the adversary’s progress is tracked with a black cross token. 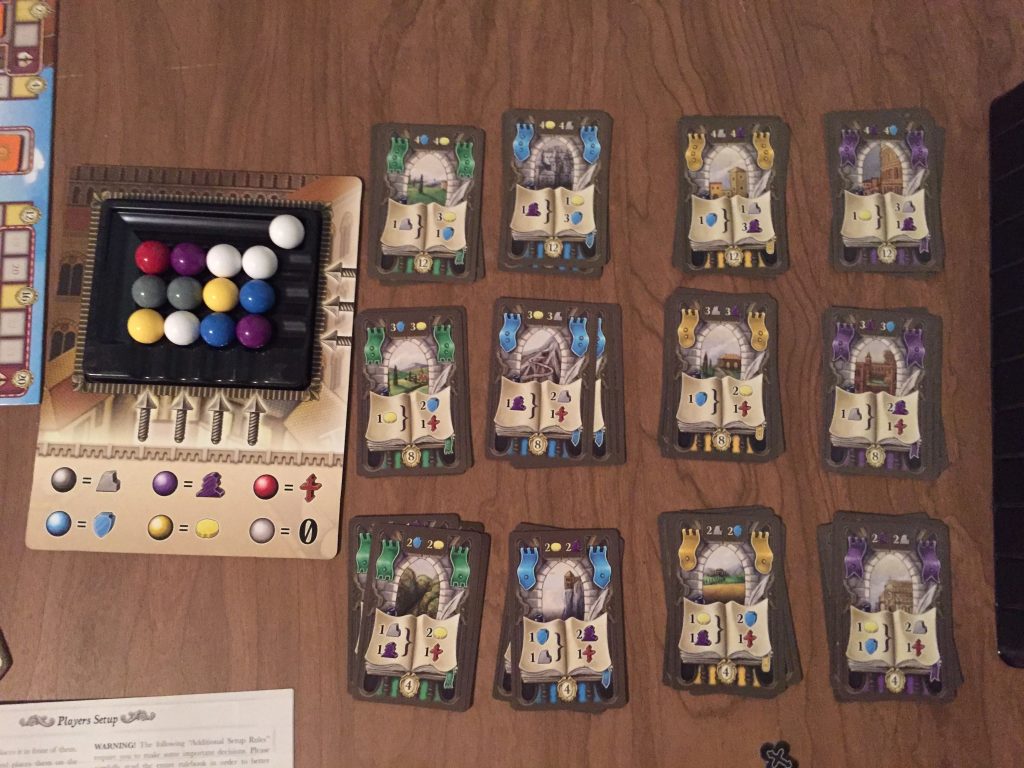 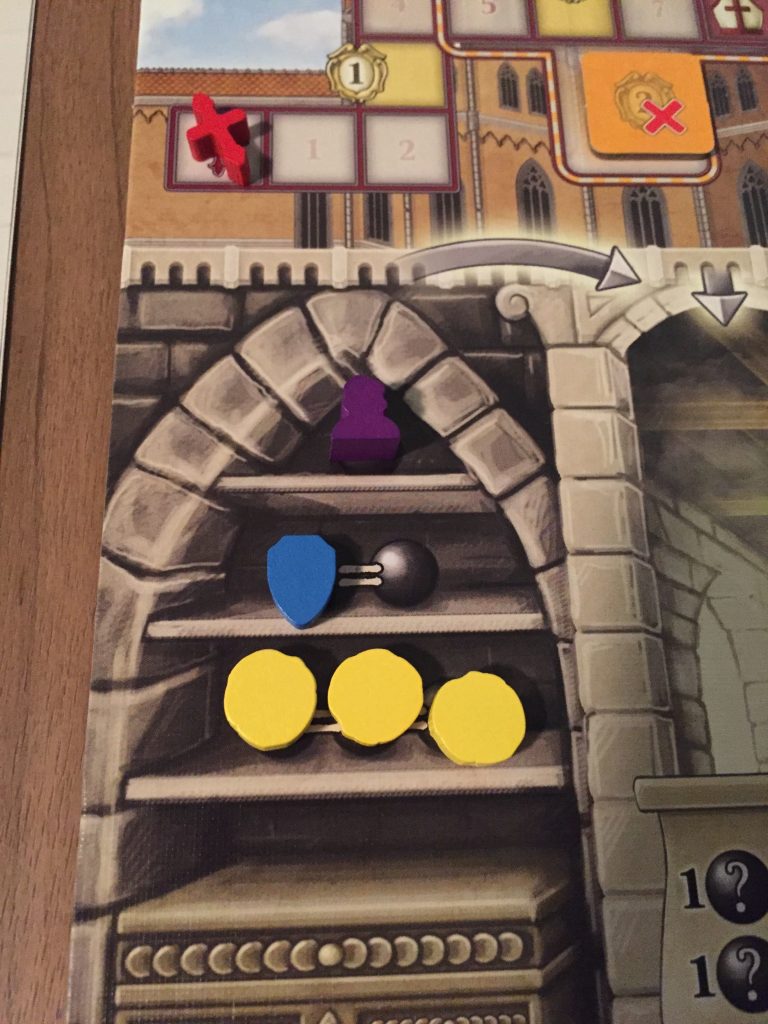 This player needs to either buy a Development card or activate their production; they only have room for one more shield in their depot.

Players in Masters have three options, of which they must choose one each round: Get Market resources, buy a Development card, or Activate their Production. The Market is represented by 12 colored balls – three rows and 4 columns – with one leftover ball on the side. When using the market, players will choose one row or column, and gain everything in that set. They will then take the one extra ball, and push it in the direction of the arrows at the market; this will force the last ball in the row or column out, and it will roll along the outside until it rests at the top right corner. This makes for interesting and always random market actions – rarely will two games will see the same combinations at the market. Careful planning is needed, however, since only 6 resources can be stored at a player’s depot – 1 of one kind, 2 of another, and 3 of a third type of resource.

On their turn, any player can buy a Development card if they have the resources to do so. If they cannot, and don’t want to use the Market, their only other option is to Activate their Production. Each player begins the game with a simple 2-to-1 option, where they can take any two resources and turn them into one of any kind. The advantage here is that any resources gained during production go into the player’s strong box, which can hold unlimited resources. There are even “3x” tokens to help signify mass quantities, should players run low on tokens for a specific resource. Development cards will allow players to have more production options, with the higher-tier cards giving the best bonuses, with smaller activation fees. Also, players can only purchase and place a tier 2 Development card after they have purchased a tier 1 card. Development cards can only go on top of a lower-tier card, and higher tiers cannot be placed without the ones below them being purchased and placed first. The only other action that can be taken is playing Leader cards, which can be done in any turn as soon as the requirements are met (in addition to a regular action). These Leader cards provide bonuses that will help you build your resource engine. 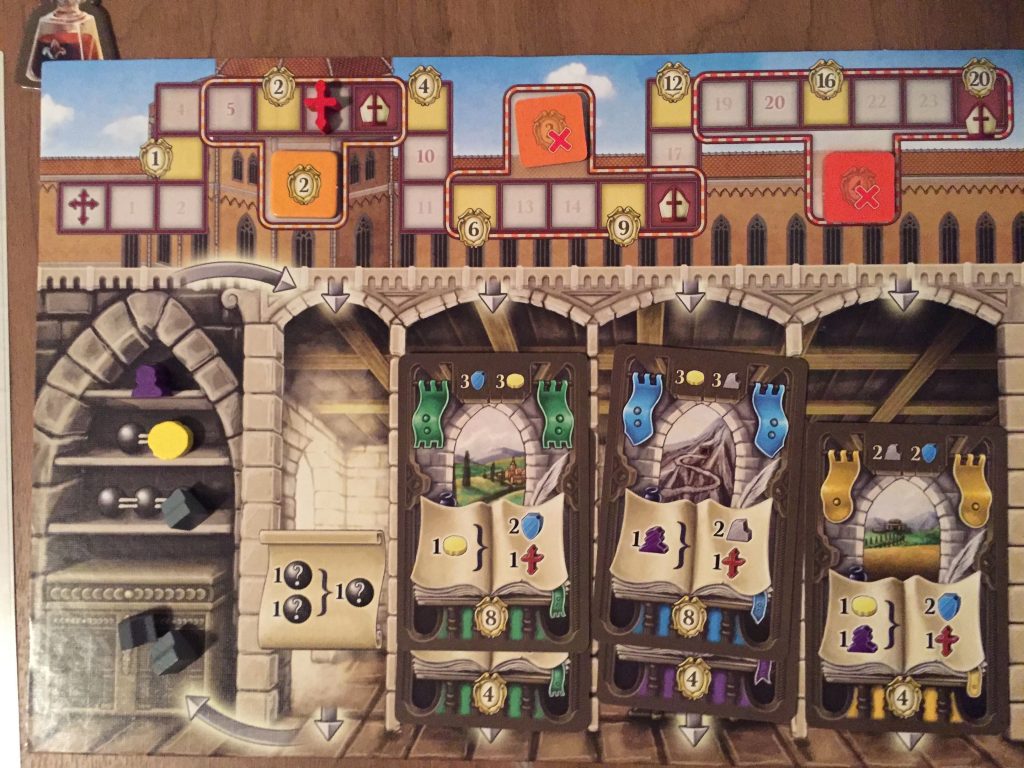 This move would get the active player 1 servant and one stone; had they pushed up the middle row they would have gotten 1 faith, 2 shields, and 1 coin.

I really like the market in Masters; and not just because you get to send an over-sized marble rolling around the outside of it. Finding the balance between getting the most resources you can but only the ones you really need is very engaging. You’ll need to keep an eye on your depot, too – if you take in too many resources and need to discard one or more, then everyone else at the table will get to bump their faith marker up one time on the track per each discarded resource. It keeps players from being too greedy, and keeps them on their toes trying to maximize their efficiency.  I even found a few times where I was taking a longer-than-usual turn trying to optimize everything and not fall behind. 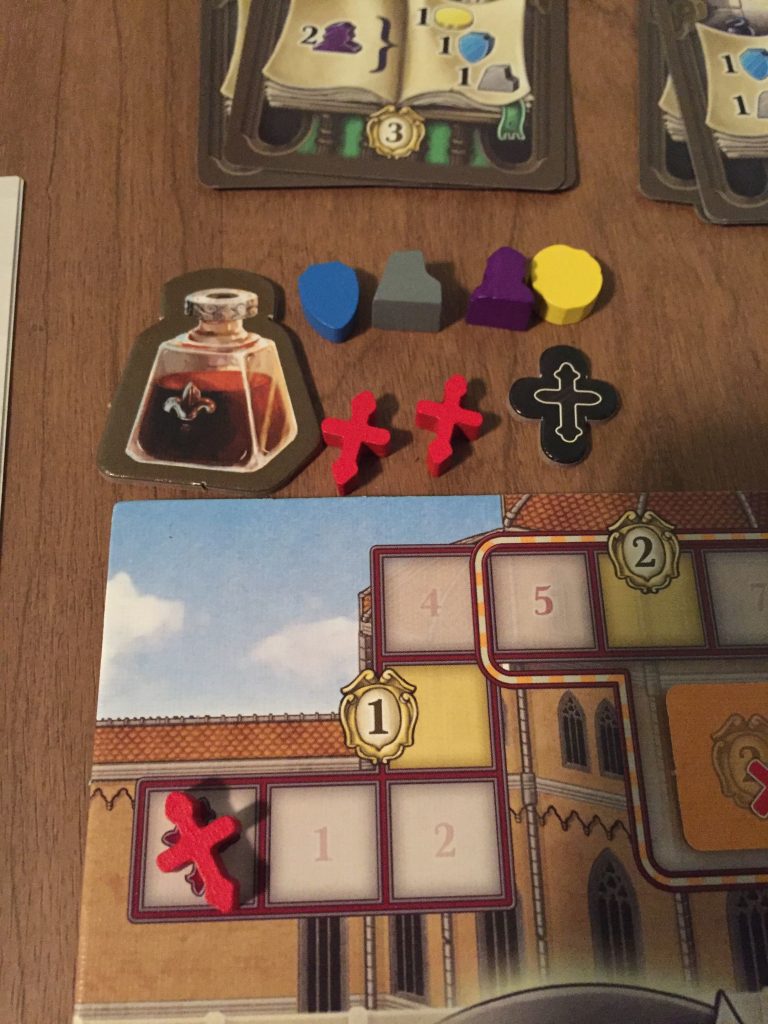 I just wish they had some flavor text or names to spice them up. By mid-game, once my engine was going, it felt a bit less like the theme was present at all. I ended up being more focused on the points and numbers of it rather than thinking about the setting at all. A bit more theme integration would have pushed Masters from “very good” to possibly “great.”