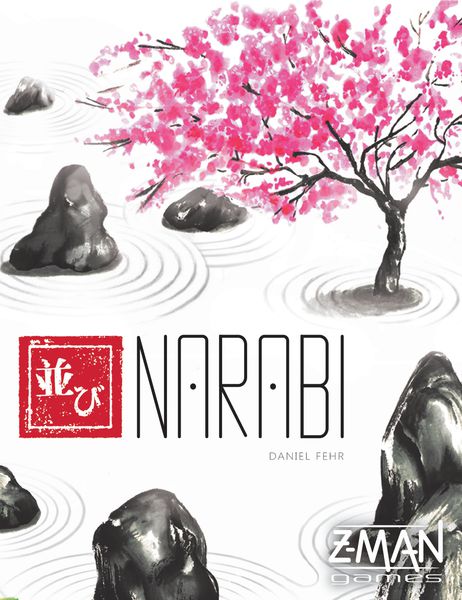 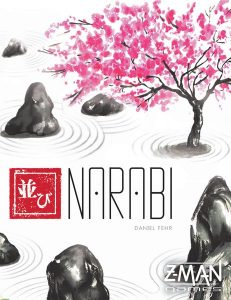 Narabi is a card game of bringing order out of chaos. Using random combinations of number and restriction cards, players must work together to organize cards in numerical order. It is a fast-playing family game with an interesting twist.

Narabi follows the trend of minimalistic “zen games,” those less-is-more designs that are just as pretty to look at as they are relaxing to play. In this game, players work together to numerically arrange a set of numbered cards—the catch is that each card is randomly paired with a restriction/rule that limits how it may be moved.

The game includes two small decks of cards. One consists of white and black numbered cards (along with a few blanks): 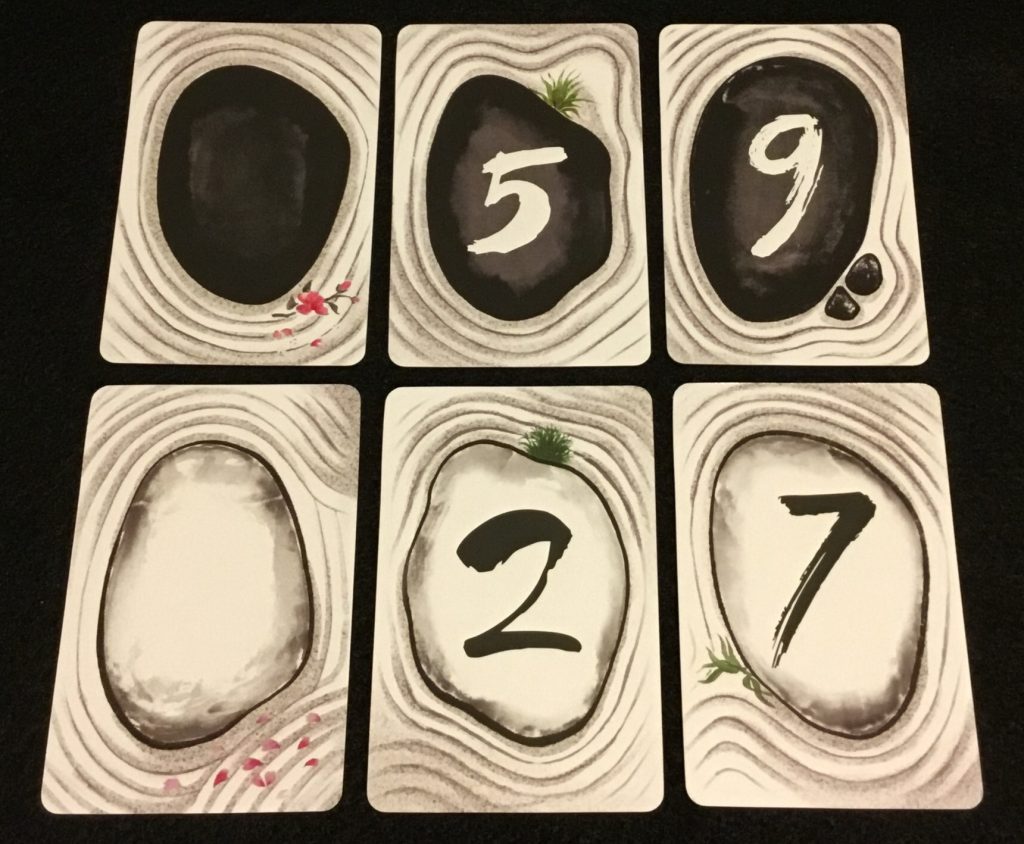 And the other consists of restriction cards:

Narabi comes with transparent sleeves, which players use to “create” the cards for each game. To do this, they insert one card from each deck into every sleeve, back to back, to create unique number/restriction combinations. 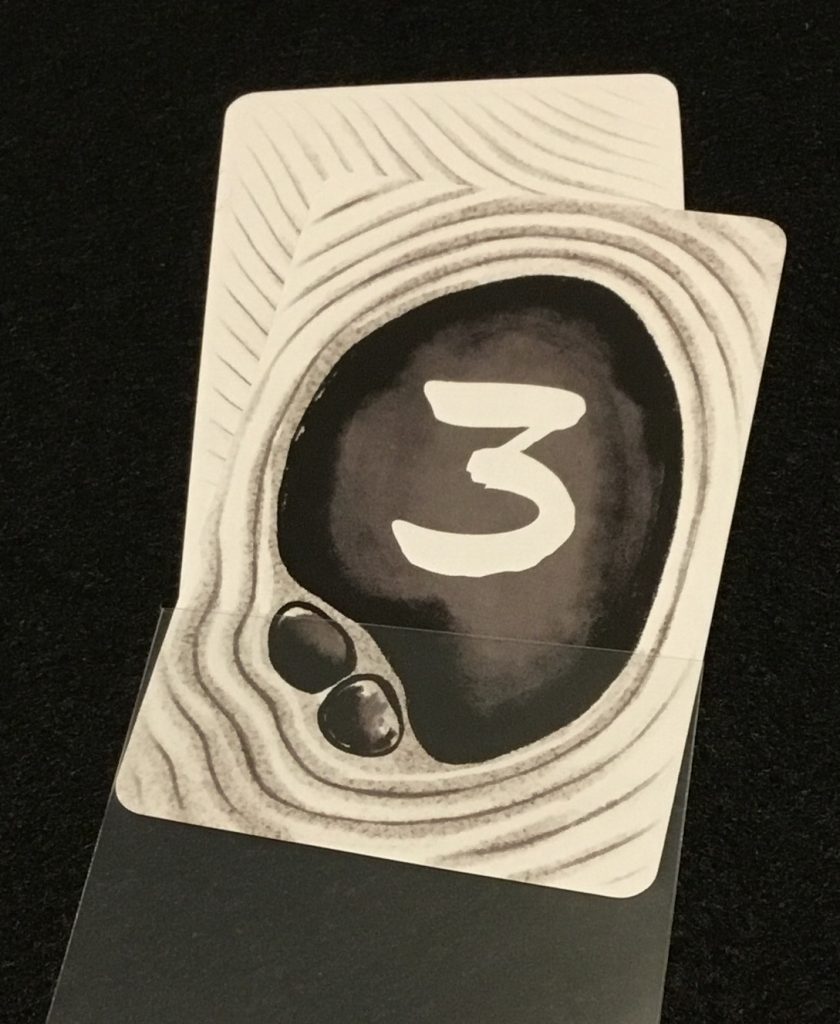 These sleeved card pairs are shuffled and distributed, number-side-up, such that they create a circle of cards among players. Below is an example setup for a five-player game: 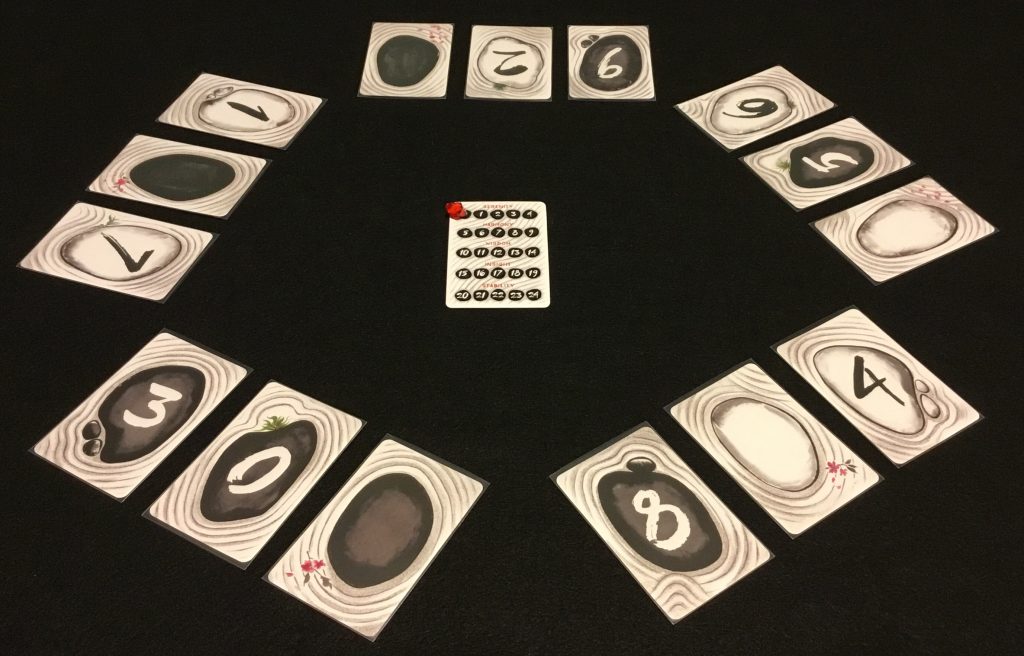 On a player’s turn, he trades a card in front of himself with one in front of another player, according to his card’s rule. To illustrate: 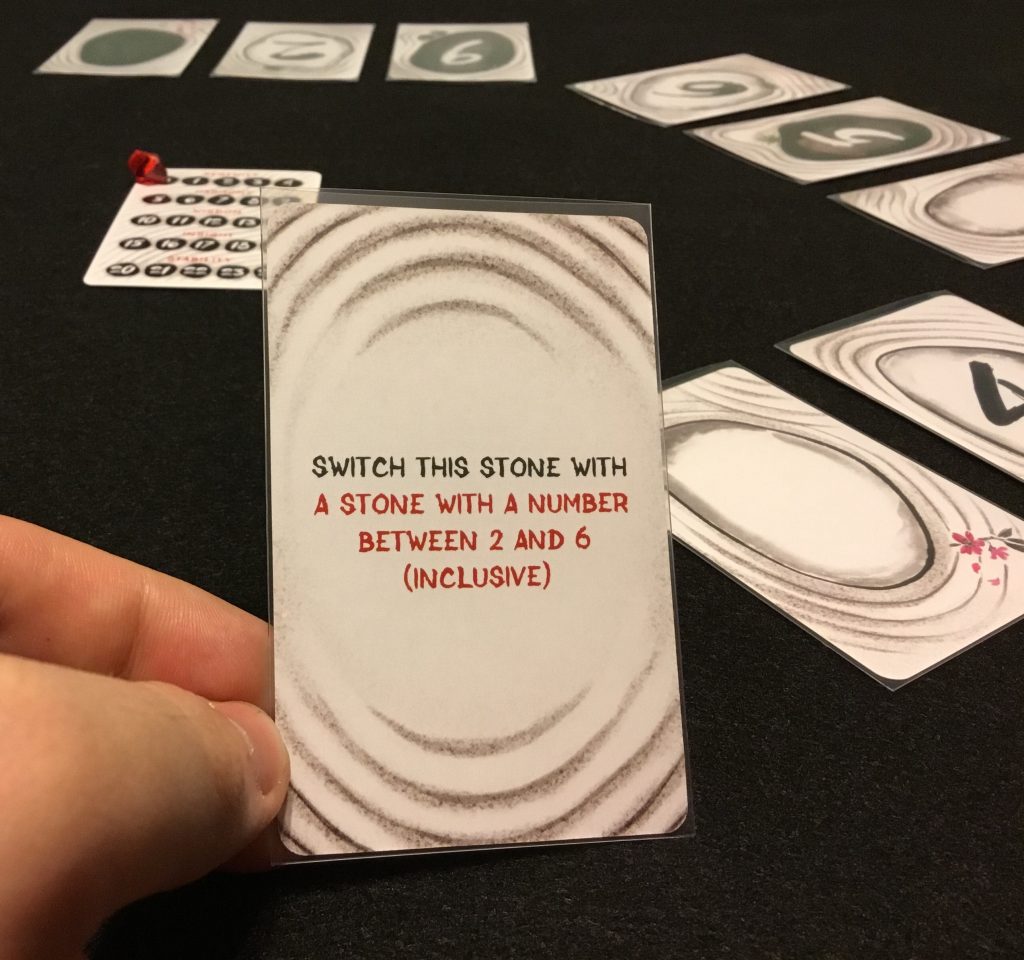 Here, the player’s “8” card says it can only be traded with a card of value 2-6. He makes a trade according to this condition, and then the next player takes her turn.

Players may always examine the restrictions of the cards in front of them, but may not reveal what they are to others. They may, however, ask a question like “Can this card be traded for that card?”

Herein lies the challenge of the game: players must attempt to deduce what each card’s rule is, so they can plan out how to get them all in order. If all cards are arranged numerically around the table (ascending or descending, ignoring blanks), the players win. A turn counter in the center tracks how long it takes players to do this—the fewer turns it takes, the better their overall “score.”

Narabi is an interesting concept, but in practice, it was not a game I enjoyed. It’s odd—I usually love both puzzle and deduction games, but neither style of play comes through strongly here. 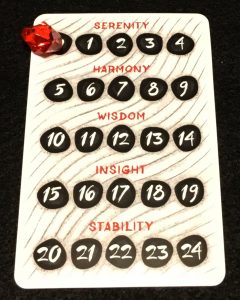 Each time I played Narabi, I found it to be either frustrating or too dependent upon random chance. Since the objective is to get all the cards in order, players will constantly be moving cards to get closer to this goal. What often happens, however, is that players near victory but then get stuck at the very end. It’s all too common to be ALMOST there, and have two or three troublesome cards that can’t move without undoing the work players have done to get everything else in order.

Additionally, the original deal can really set the tone and difficulty of the game. While somewhat unlikely, it is actually possible that the game can “win itself” on a perfect deal, without any player taking a turn. On top of this, the number/restriction pairs can be quite swingy. Consider the “0” card: if its restriction is that it can only be traded with a higher-value card, no problem, players will have lots of choices. But if it can only be traded with a lower number, then the players, through no fault of their own, will have no options at all.

I like the idea of Narabi—having cards that behave differently each game is really cool, and I think it COULD work really well. Unfortunately, it suffers from an abundance of chance-factors that make it very hit-or-miss. Z-Man Games has a pretty stellar record overall, but this one gets a pass from me.

Narabi is a neat concept, but it's not for me.