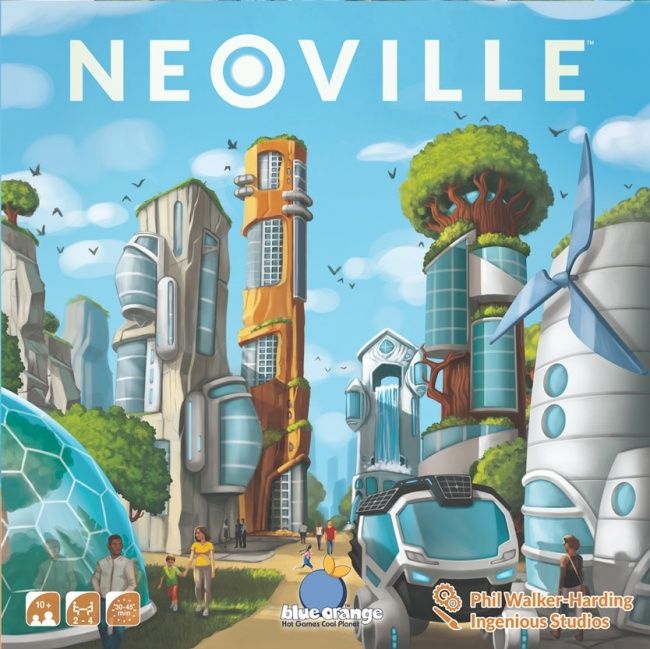 Neoville is a new game from designer Phil Walker-Harding in which players build futuristic eco-cities. As their cities grow, players add skyscrapers and utilities, but they must make sure their terrain is suited for them. Do you have what it takes to build the city of tomorrow?

Phil Walker-Harding has been on a roll lately, churning out great game after great game. Neoville is his latest offering, and it feels a bit like a sequel to his last Blue Orange collaboration, Cloud City (a game I quite enjoyed).

In Neoville, players each build a 4×4 grid of tiles to form a city. Every tile has 4 squares on it, showing the game’s different terrain types (soil, grass, rock, and water).

The goal of the game is to earn the most points, and players accomplish this by incorporating skyscrapers and utilities into their city. The turn structure is very simple. On a player’s turn, they:

Skyscrapers and utilities are worth points at the end of the game, so players want to build them, but doing so poses a risk. In the case of skyscrapers, each one has a point value on it, and at the end of the game, players look at the size of the terrain the building occupies. If it is greater than or equal to number on the building—say, a 5-point skyscraper in a 5-size terrain—the player earns the listed number of points. If the terrain size is less, however, they instead lose that number of points!

There are 3 types of utilities, and each has its own scoring criteria. The ecomobile scores based on specific features in its row and column, the windmill scores based on which tile it resides on in the grid, and the biodome scores based on the shape of its district. Players use 2 of the 3 utilities each game. Once again, utilities can be worth positive or negative points, depending upon if players fulfilled their objectives.

Players continue placing tiles and structures until everyone has completed their 4×4 grid. At that time, points are tallied from skyscrapers, utilities, and majorities of specially-marked spaces. The player with the most points wins!

Phil Walker-Harding’s classic design style comes through in Neoville, but my opinion of this game is somewhat middling. Neoville is part spatial puzzle, part risk-taking, and part long-term planning—all aspects I enjoy—but something about the overall experience just didn’t click for me. Each turn, players must consider their best move for the moment, whether adding a structure will be worthwhile, and how the other tiles in their hand can help set them up for the coming rounds. Mechanically, it all works well, but I did not find the decisions as engaging as those from Cloud City (even though Cloud City is not as deep a game, all things considered).

Neoville has an unusual rhythm to it. Typically, in games like this, things start out quickly as players get going, and may slow down by the end as the decision space opens up and players have more to consider. I found this game to be the opposite—early on, players make their long-term plans with large skyscrapers and utility objectives. Then, as things get moving, the strategy shifts toward completing these goals, meaning it becomes more about placing specific tiles and less about building structures. In essence, Neoville feels front-loaded; the big decisions happen early on, and the rest of the game follows a more prescribed path.

The production of Neoville is functional, but it would have been nice if the buildings had been plastic pieces (a la Cloud City) rather than cardboard standees. Not only would this have given the game a stronger table presence, but it would have made the different skyscrapers easier to distinguish. As it is, it can be hard to tell at a glance which skyscrapers are which type. It’s certainly not game-breaking, but the overall aesthetic is not as strong as it could have been.

Even though I’m in the middle on this game, I think a lot of people will enjoy it. Like most games from Phil Walker-Harding, Neoville is accessible to newcomers but strategic enough for hobby gamers. A full 4-player game takes about 45 minutes, so it’s easy to work into a game night lineup. If it sounds like something you’ll enjoy, give it a try! Personally, though, I’ll probably stick to Cloud City.

Neoville works well mechanically, but the overall experience does not grab me.