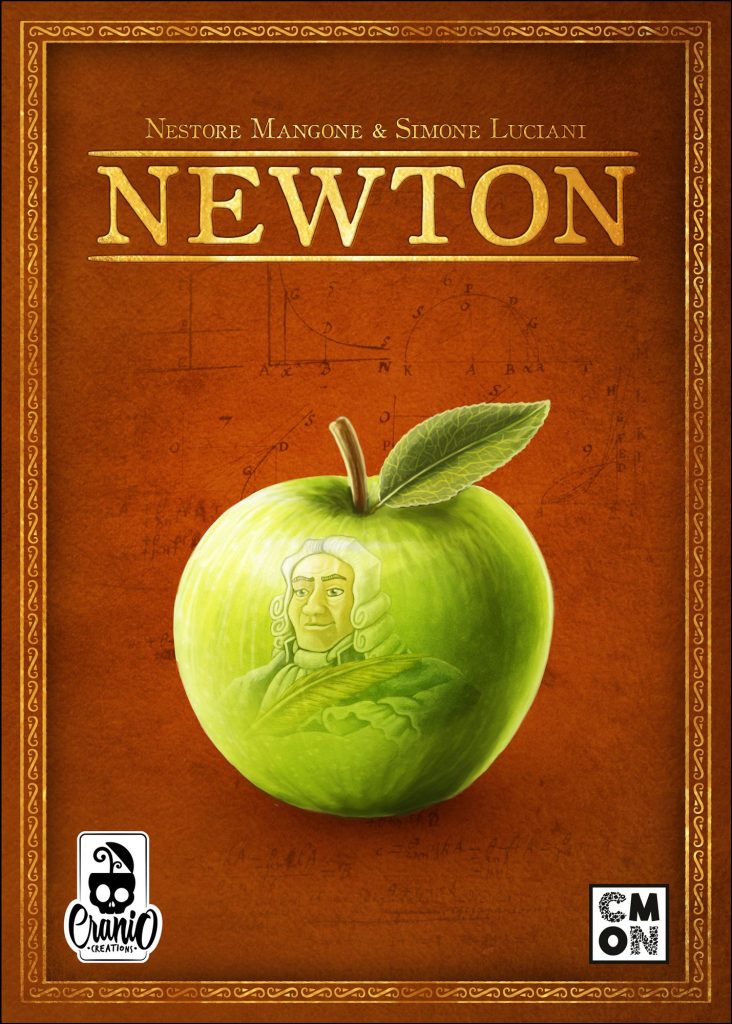 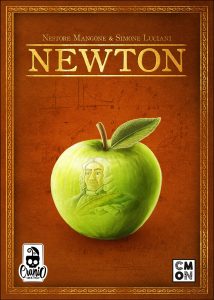 You get a lot of weird comments as a math teacher or professor, and most can be summed up as a “math apology.” You tell someone what you do, and they start talking about how bad they are at math. So, it’s not surprising that we don’t see too many games that celebrate mathematics.

Wait, you say? This is a game about scientists and their discoveries? But Newton is the father of Calculus! Let me have my moment! Anyway, let’s take a look…. FOR MATHEMATICS! (Hmm… just doesn’t have the same ring, does it?) 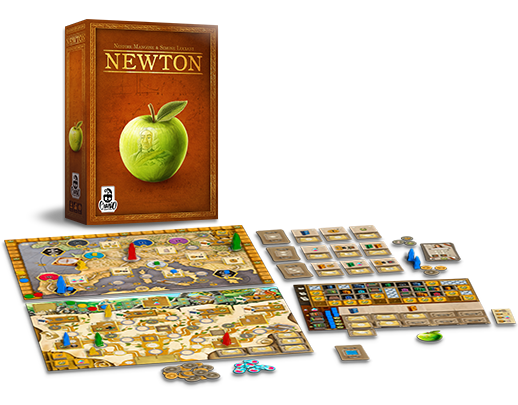 I’ve mentioned in other reviews that I often view strategy board games as having two parts: a central mechanism for taking a turn, and then objectives attained by that mechanism. For some of the very best games, it’s impossible to separate the two, but many great games still have that obvious dividing line. And it’s clear as day in Newton.

The absolute best part of Newton is the mechanism for taking a turn. You start with a hand of cards, and simply play one. Each card has a symbol on it corresponding to an action, and the more of the symbol you have, the better the action. For example, the first Movement card you play will let you move one space, but play a second in the same round ans you can move twice, since you see two Movement symbols. Symbols can appear in other ways, too – everyone starts with a certain symbol on their board, and can add bonus symbols to their board through various upgrades.

Perhaps most interestingly, every round players must bury one card from their hand, showing only the symbol (which becomes a permanent boost to your tableau). This creates intrinsic engine-building with the actions, but also forces players to spend actions buying new, better cards for their hand, lest they have no cards to play. It’s deckbuilding (or “handbuilding”), but in a very light and streamlined way. You wouldn’t have even thought of deckbuilding if I hadn’t said it – you would just see a clever card mechanism that instantly makes sense.

That’s a really neat mechanism, but what do you do with it? Well, this is Newton, so you do… science. You travel the world, you read books for victory points, you send students out to do your busywork, and at critical moments, you get help from an expert in the field. These are cool ideas, and it’s a fun, unique theme. But it only really interweaves with the card mechanism because the game says it has to. What I mean by that is, the bonus tiles and things on the three (!) different board areas (not counting the individual player boards) give you various bonuses for the cardplay, but only because the bonuses have been hand-picked to adjust the various areas of the board or to boost card actions. You could strip away everything except the card mechanism and replace it with an entirely different theme and ruleset and it would work fine.

While this division between the “how” and “why” of a turn is glaring, it’s not necessarily a bad thing, and it’s something that happens often in European strategy games. In fact, it could work in the game’s favor: I’d love to see this exact same card setup with an entirely different back half, with an altogether different theme (not that I dislike this one!). It’s quite a nice change of pace from the usual “settling an estate” or “trading goods,” but still fits nicely into the same period in which these Eurogames usually find themselves.

I do have two complaints, however. The first is that the game looks like every Eurogame out there, even if the theme is different. Part of it is using the ubiquitous Klemens Franz as the artist yet again; the other problem is the overwhelming use of beige, brown and other muddy colors. The game looks serviceable, and the iconography is beautifully clear, but I just wish it was brighter and snappier.

My other complaint is the lack of interaction. Sure, players are competing for the most victory points, and there are some bonus tiles that only go to whoever gets there first, but that’s literally it. This is exemplified by the solo play rules, which require a shockingly small amount of adjustment from the 2-4 player rules. On the other hand, because of this, the game plays incredibly well as a solitaire game. But, given the clear divide among the mechanisms I described earlier, they could have bolted on something far more interactive to the card play mechanism (area control or majority scoring, for example).

Even though I have some complaints, those may actually be positives for other players. A friend with whom I played through Newton is a huge fan of other games by Simone Luciani, and he enjoys this type of artwork as well as the low level of interaction. As for me, nothing makes me happier than having a grip of cards in hand and an interesting way to play them, and that strength in Newton outweighs any complaints.

Thank you to Asmodee North America for providing a review copy of Newton.