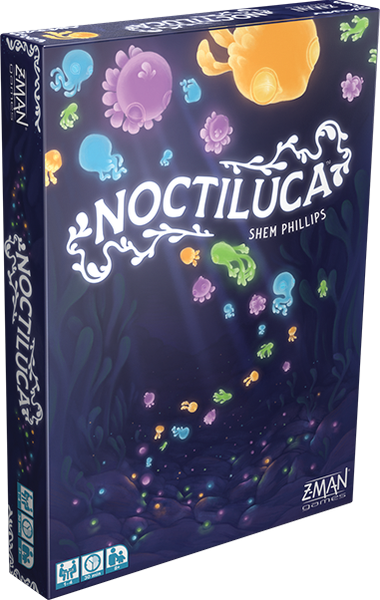 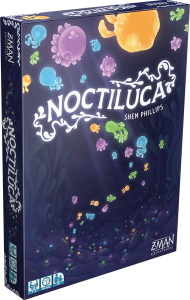 Noctiluca is one of those games that uses dice in a non-traditional way. Players take turns claiming a number of dice showing a particular result, but they must make sure they get only as many dice as they want—if they get more than they can take, their opponents might benefit from it! It is a beautiful-looking game that is great for the whole family.

Noctiluca is an interesting spatial puzzle. Played out on a hex grid, players take turns collecting dice, which represent the titular, undersea critters. Since I didn’t know what they were either, I went to the ever-reputable Wikipedia for the answer:

Noctiluca scintillans, commonly known as the sea sparkle, is a free-living, marine-dwelling species of dinoflagellate that exhibits bioluminescence when disturbed.

The more you know, am I right?

In this game, players attempt to catch these shinies in jars, like subaquatic fireflies. Noctiluca comes with over a hundred dice (even more than Sagrada!), which are scattered across the board in groups of fours and fives. 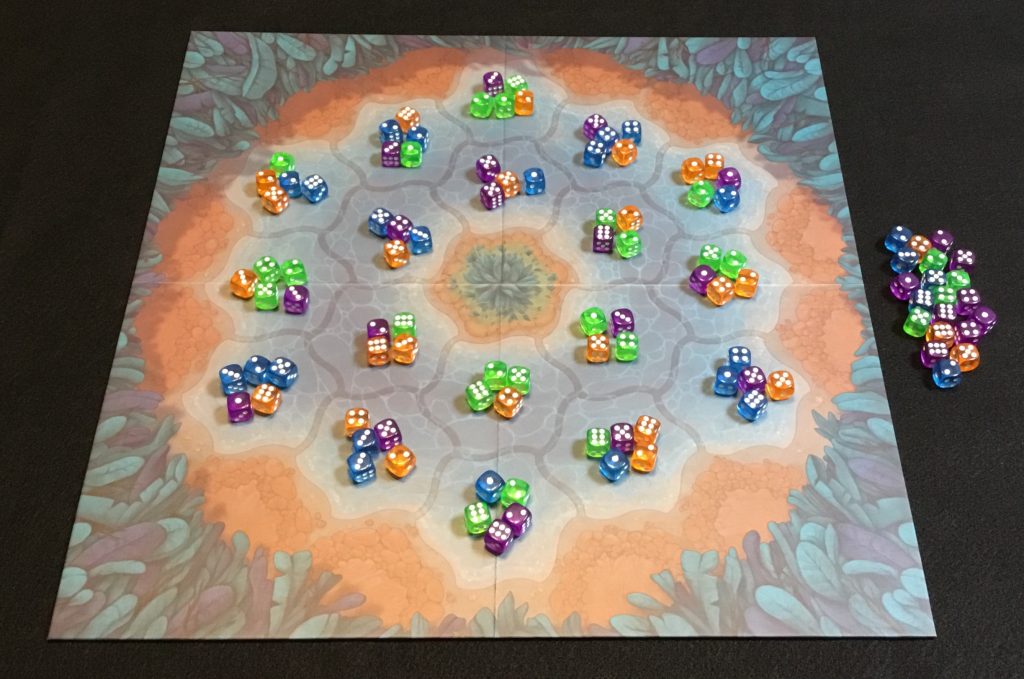 Players begin with two “jar” cards, which show spaces for particular colors of dice. The jars come in three colors, as indicated by the “tags” on them. Three corresponding sets of point tokens are placed in the middle, in ascending order, and the rest of the cards are shuffled and divided into piles. Each player receives a number of pawns and a face-down card showing one of the colors of noctiluca. 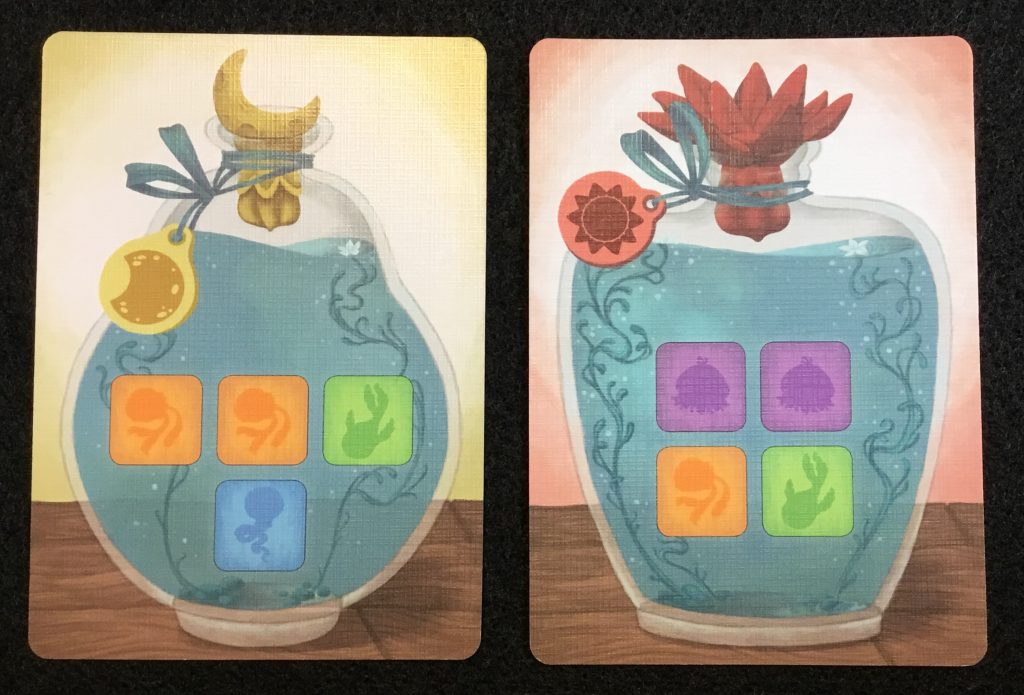 A yellow and a red jar.

The goal of the game is to get the most points, and the turn sequence is remarkably simple. Players take turns placing one of their pawns on an empty “beach” space, selecting a number, and taking all the dice showing that number from the spaces in a straight line from the pawn. To illustrate: 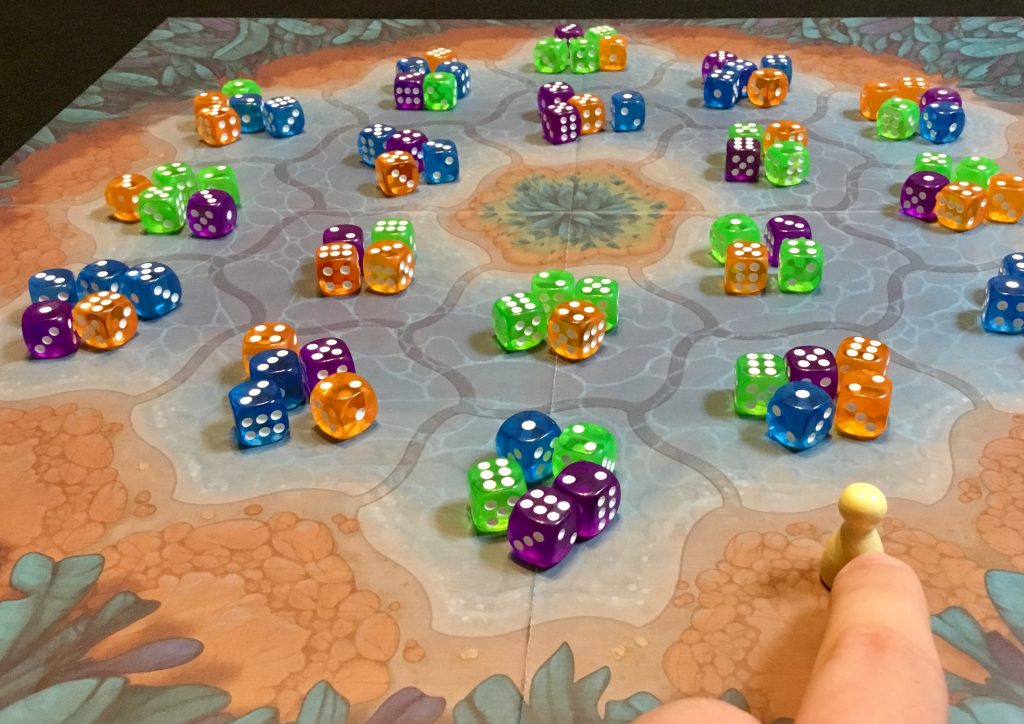 Suppose the first pawn has just been placed, as shown. The player must take dice from one of the two lines of spaces that connect to it—either the line to its left, or the line to its right.

To do this, the player first selects a number, say, 5. She must then take all the dice of that number from one set of spaces or the other. Thus, she can either get a blue and a purple die, if she chooses the 5’s to the pawn’s left, or she can get two purples, a green, and an orange, if she chooses the 5’s to its right. (For the sake of example, let’s suppose she does the latter.)

When she is done, the next player places his pawn on a different, empty beach space. 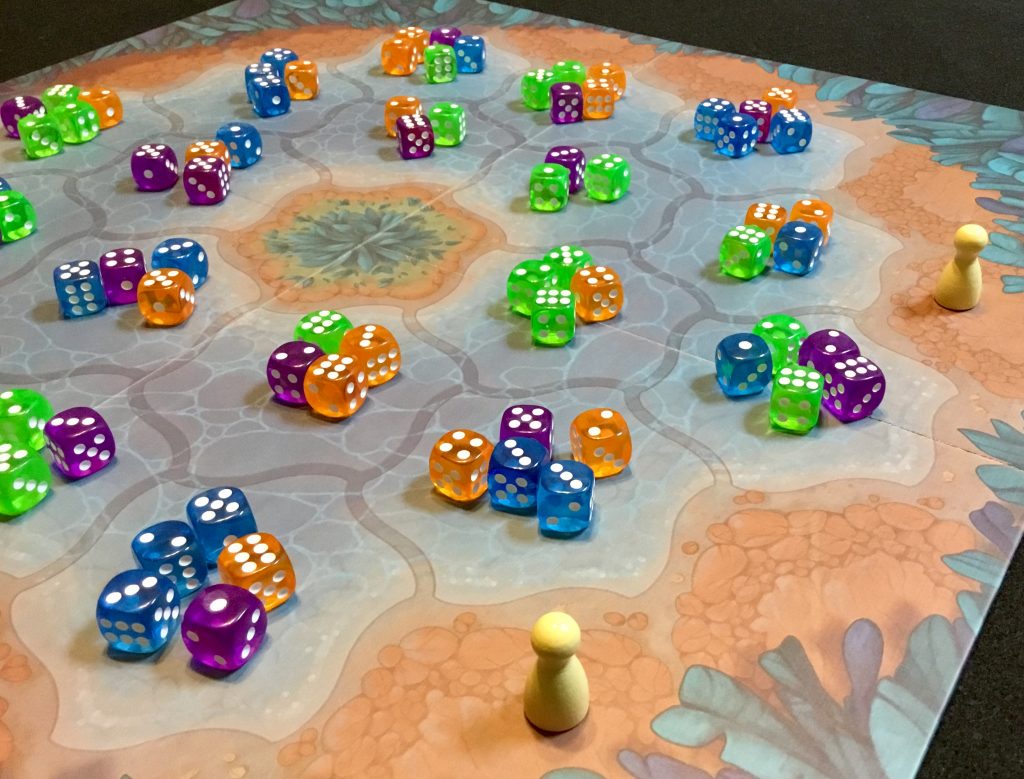 He must then choose dice from one of the two connected lines of spaces. Note, however, that since the first player removed some 5’s last turn, he would now get one less die if he chooses to take 5’s from the path to his right (there was an orange 5 on that path before, but the first player swiped it).

As players acquire dice, they place them immediately onto the appropriate spaces on their jar cards. If a player picks up more dice than her jars can hold, extra dice are passed around the table; one at a time, opponents may claim these excess dice if their jars have room for it.

When a player’s jar is full, she takes the topmost point token from the matching stack and draws a new jar card. 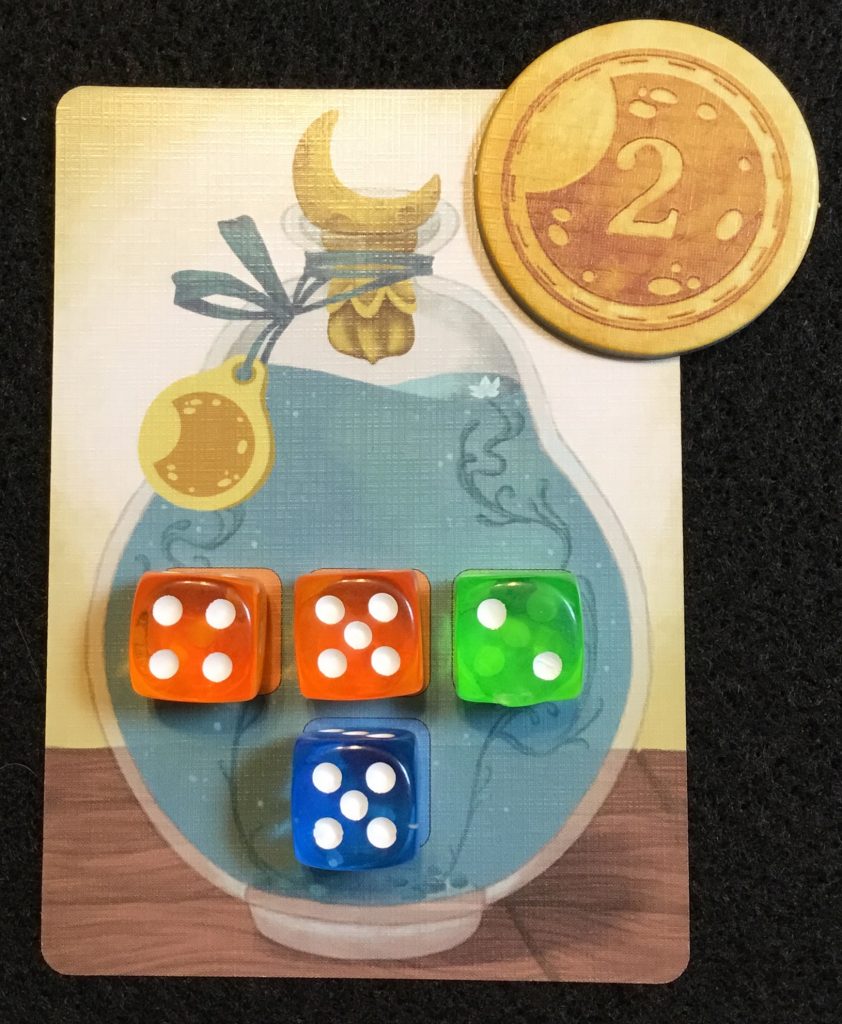 The round ends when the final pawn is placed and its dice are taken. At this time, all beach spaces will be claimed. Players then reset the board and play a second round. At the end of that round, the game is over, and players add up their scores. Points can come from tokens, completed jar cards, leftover dice on incomplete jars, and jars containing a player’s secret color. 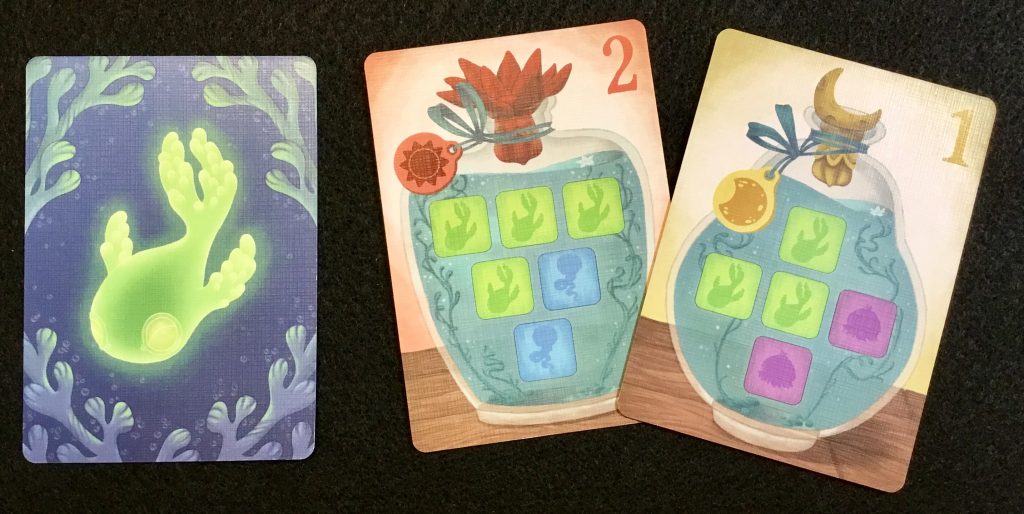 This player’s secret color was green. She completed both of these jar cards, so she earns an extra seven points, since she collected seven green dice.

The player with the highest score is the winner.

There is a lot to like about Noctiluca. It looks gorgeous, it tickles the brain, and it is simple to boot. While the gameplay is not directly interactive, players must constantly be aware of what their opponents want and avoid giving away free dice by taking more than they can use.

Herein lies my biggest issue with this game: the downtime that stems from an overwhelming amount of options. Math has never been my strong suit, but by my calculation, the first player to place a pawn each round is likely to have more than seventy unique choices to consider. The board dwindles a bit as play progresses, but even the last pawn placed can offer as many as a dozen choices.

If players were to act perfectly strategically and consider all possibilities, the game would move painfully slowly. Thus, for the sake of keeping things moving, players often have to forego examining all their options and just “pick something.” Games should always present players with meaningful decisions, but Noctiluca might do this a little TOO well. That said, I like the puzzle-y challenge of this game. It almost reminds me of Azul, in the sense that players want to take just enough, but not too many of the game’s resources.

I should mention that Noctiluca has an interesting solo variant, as well. For the sake of length, I’m not going to dig into how it works, but suffice it to say that I enjoyed trying it out.

Noctiluca is a nice family experience. I always like when games use classic mechanisms in new and creative ways, and this one does that with dice. For a game with such a huge pile of them, there is hardly any luck involved—to this end, Noctiluca can be enjoyed by gamers and non-gamers alike. If you are looking for a breezy game with some clever ideas and a whole lot to consider, this might be one to check out.