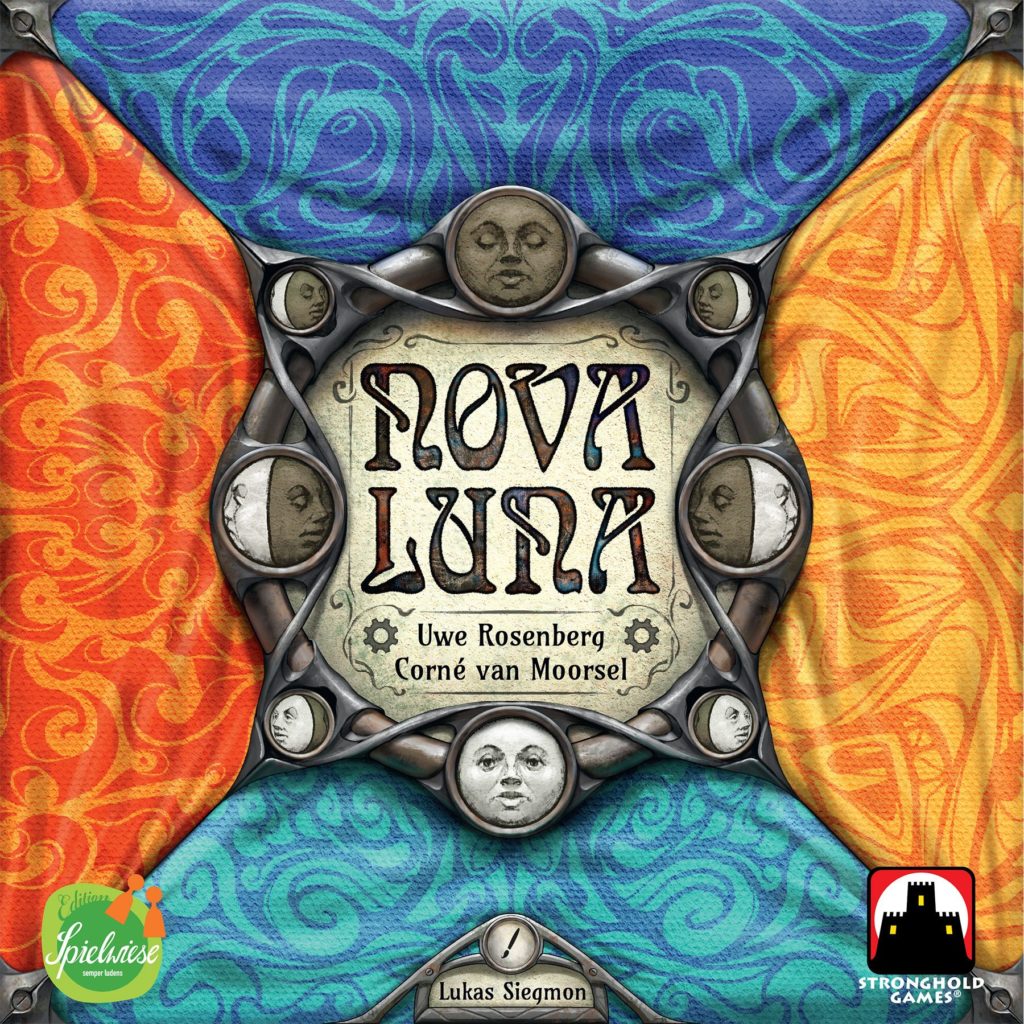 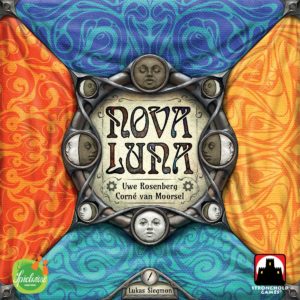 The Spiel des Jahres (German Game of the Year) is a big deal, resulting in a vast increase in sales for the winner every year. This year, when the nominees were announced in May, I didn’t recognize a single one, as none had been yet released in America. Nova Luna is now here for us to check out, and while it lost the award to Pictures, it still had the prestige of being nominated. Was it a worthy choice? Let’s find out! 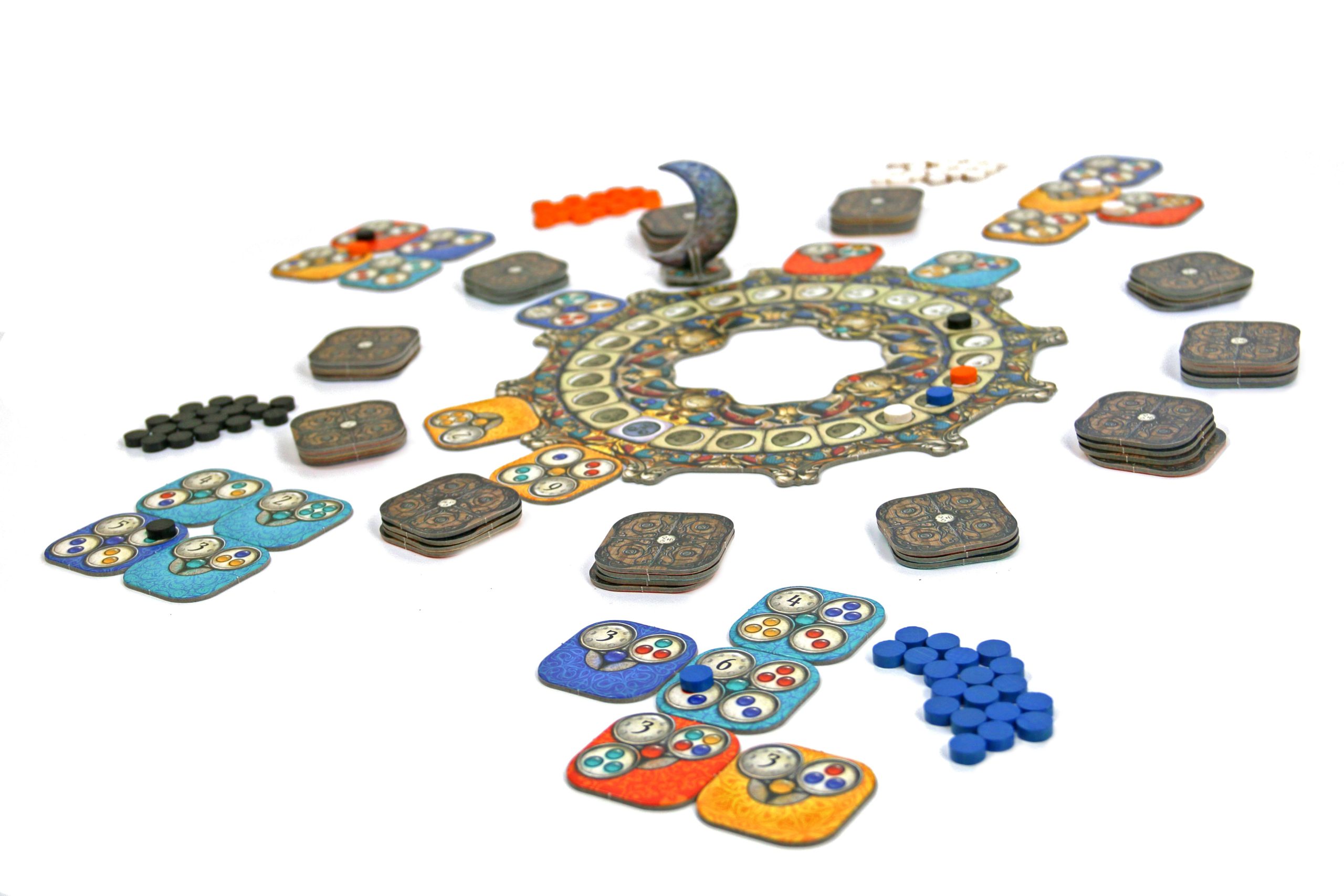 Unfortunately, Nova Luna gives a poor first impression. The box is mostly air, and the game is incredibly overpriced. The tiles are tolerable, but the discs themselves are far too small and easily bumped. The artwork is also incredibly drab, the cover especially. Since abstract games can’t really rely on a theme for immersion, it seems to me that it’s all the more important that the colors pop, splash, and scream fun. Not so here. I’m also unsure why they used two shades of blue for the tile types instead of another color.

Sometimes a game can overcome that bad first impression with stellar gameplay. And at first, Nova Luna is promising. Patchwork is a brilliant game (which Nova Luna borrows from), and Nova Luna has a clean, simple ruleset. In fact, it seems like a great blueprint for an excellent game. But a combination of problems makes it fall short. It took me a while to figure out what those were, but the two areas that really hurt this game are strategy and tension.

Every game has some combination of short-term moves and gains (tactics) and long-term goals (strategy). Of course, many games find themselves quite lacking in one or the other. Here, tactics are plentiful: each turn, you have a choice of 1-3 tiles (usually 3), and have to determine the best one for you, and whether it’s worth the time you have to spend (movement on the turn track) to claim the tile. However, because tiles don’t refresh until they’re almost completely gone, and not all tiles are used, it is virtually impossible to “count” on certain tiles appearing, let alone opponents leaving them for you, let alone them appearing as one of your three options for the turn. The tile-laying system is structured in a way that would reward long-term planning, and then the selection mechanism simply doesn’t let you do it.

When I think about other great tile-laying games — Patchwork, Kingdomino, Barenpark — there is a tension that stems from wanting particular pieces and worrying that my opponents will get them first, either because they also want the pieces or because they know that I need them. Nova Luna completely lacks tension for two reasons. The first is as before: players can only pick the 1-3 tiles in front of the Moon marker, so you likely aren’t getting that piece you really want anyway. Even if your opponent leaves it for you, they’ve moved past the tile you wanted and you still can’t get it.

The second issue is more subtle. Your own personal area becomes so convoluted with trying to figure out the many goals and chains on it, that you just don’t have capacity to be care about other people’s layouts. (In fact, we often found ourselves even finding we had completed a goal and never recorded it, or forgetting to move the time track because we’re too absorbed in our own tile layout.) This means I don’t even consider “hate drafting” tiles because I can’t bother to assess the other players’ situations. It also renders the time track pointless, since trying to snag something before another player begins to feel like a completely irrelevant concept.

It’s a shame, because the rules of Nova Luna are built on a very solid foundation, but this game has no edge. It has nothing going for it over its competitors. It’s short and easily explained and not actively bad, so I wouldn’t throw a fit if someone wanted me to play it with them. But with no strategy, no tension, and an unattractive aesthetic, I can name too many tile-layers I’d rather play.

Thank you to Stronghold Games for providing a review copy of Nova Luna.

Nova Luna is a terribly unimpressive game in a crowded genre. Play Patchwork, Azul, Kingdomino, Barenpark, or one of the many other better games instead.