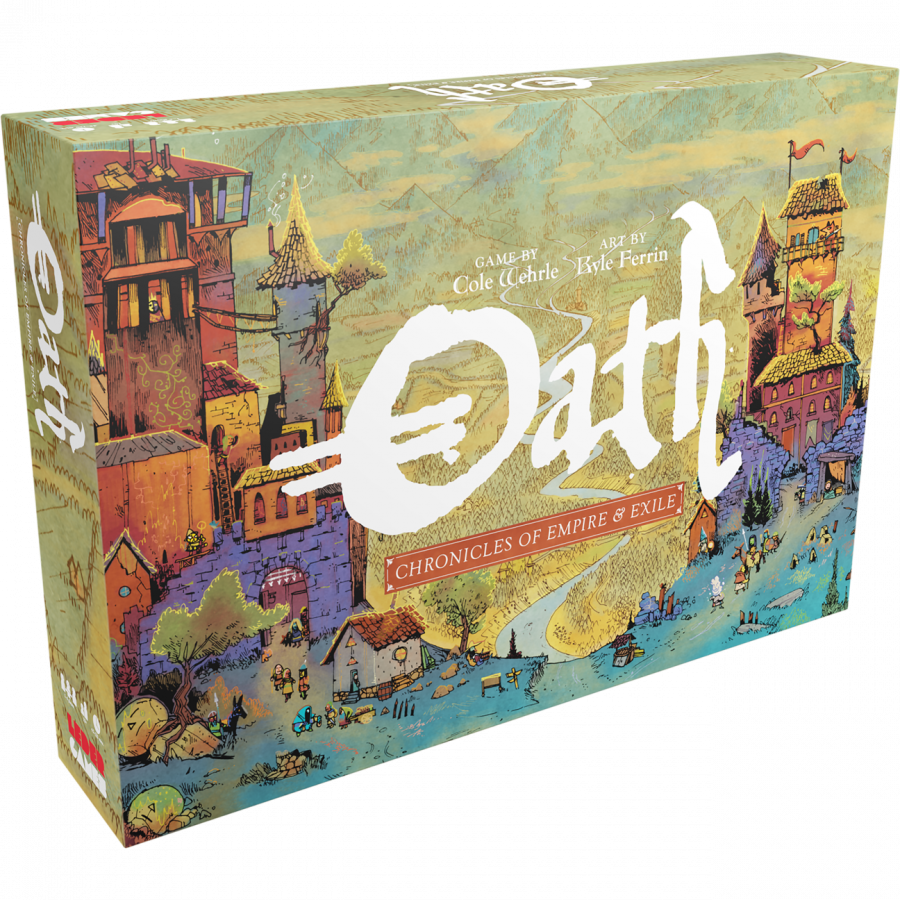 Oath: Chronicles of Empire and Exile has generated a lot of excitement since its Kickstarter campaign. It promises players the chance to “change the course of history as empires rise and fall and your tale becomes legend.” Each game is meant to be part of a larger story in the world of Oath, and players get to make meaningful choices that will impact future games. It’s an exciting premise, but does Oath deliver?

Oath is a behemoth. Not because of its contents, which consist of a bunch of cards, locations, pawns, warbands, and tokens. Oath is a behemoth because of its rulebook. There are actually 2 different rulebooks, each designed with a specific group of players in mind. The first is for players who play games like Pandemic and Catan, and the second is for more hardcore players who play games like Twilight Struggle or Gloomhaven. I’ve played and taught Gloomhaven, and even I found the latter, more hardcore rulebook too intimidating. There’s a lot to learn here.

Oath is an area-control, action-selection game where 1 player plays as the Chancellor, who owns most of the locations at game start, and the other players play as Exiles or Citizens, depending on how the last game went. The Chancellor is slightly overpowered, but everyone knows it and so will be picking on the Chancellor more throughout the game.

The win conditions are similar to those of Ravensburger’s Villainous in that, most of the time, players have to start their turn with certain conditions being true for them to win. The win conditions are public knowledge, and everyone will try to stop their opponents from meeting theirs. This makes the game less about who’s going to fulfill x the fastest and more about who’s going to be able to take x and keep it for a couple of turns.

Players take turns using their supply to move their pawn around the map, recruit warbands, campaign against other players, perform actions on cards, gain relics, play advisers, draw new cards, etc. If that sounds like a lot, it’s because it is, but each player’s available actions are helpfully listed on their player board. The most turns a player will get each game is 8, but often it’s only 5 or 6, so it’s essential for players to plan their turns well and focus their efforts.

Campaigning, which is how players take over territories from each other or bandits, is simple once understood, so don’t expect any tactical decisions when it comes to combat. Strategic decision-making comes before combat, when deciding which of the opponent’s territories or relics to target, but once the dice are cast, that’s it. No out-maneuvering here. Moreover, if the attacker has enough warbands, the attacker is essentially guaranteed a victory, so campaigning is usually a matter of how much players are willing to pay for taking over territories (unless the defender is lucky enough to roll a bunch of x2 modifiers).

At the end of each game of Oath, the locations owned by the winning player become a part of the Empire and the winning player, who will be the next game’s Chancellor, will own those locations at next game’s start. Then, the new Chancellor can offer Citizenship to any other player. Players who accept will begin the next game as Citizens, a part of the Empire. There are other clean-up rules, but the game walks players through how to store everything in the provided tuckboxes and how to add certain cards to each game, according to how the winning player played. It is fun to see the same buildings and locations turn up over and over because it seemed like players found a new way to exploit them each game.

The cards come in several plastic wraps and there are cards in each package that walk through how to set up the first game up, which is very helpful. Our first game was about 4 hours long including set-up and tear-down. All 4 of us had played more complex games like Scythe, The Godfather, Crown of Emara, Gloomhaven, etc. Despite the abundance of rules, the rulebook tries to encourage you to look up rules sparingly during your first playthrough, do what feels right, and double-check the rules later. We found this strategy very helpful for our group, although there were some situations that warranted a rule look-up (my group found the banners to be initially very confusing).

My favorite moments in Oath were when allegiances changed every other turn. Players would team up against the Chancellor to keep him from winning, then they would team up against each other and ask the Chancellor for help. It was absolutely delightful and replicated what I always thought a bunch of lesser kings fighting over a region might look like.

The balancing in Oath is tantalizing. There’s always a reason to attack someone and there’s always a reason to attack someone else instead. There are many turns where I had to stop someone else from winning so I could win on my next turn, but me stopping that person from winning weakened me to the point where I could no longer hold on to what I needed to win. This can lead to a dog-chasing-tail feeling, but it fits the game well, and ideally players will make some progress towards their goals each turn, despite setbacks.

Speaking of balancing, the more warbands a player has on the board, the more territories they control, and the more strength they have, the fewer actions they have compared to players with less territories, warbands, etc. So yes, someone may control half the map, but they could only be able to do 1 or 2 things on their next turn because their supply is all used up on sustaining their huge number of warbands. It’s a wonderful tension deciding between owning a lot of territories and therefore being able to take better actions or having more supply to take more actions.

The artwork is what you’d expect from the company behind Root and Fort: as if someone asked Eric Carle to draw eclectic medieval sketches. The game components are excellent: the cards are of good stock, the wooden tokens are robust, and the game mat is thick. Everything fits in the box nicely and the lid firmly closes, which is more than I can say for some games of this size.

Now for some critiques. With 3 players, if the Chancellor begins the game owning a lot of sites (which is determined by the last game), it can be very difficult for the Exiles to win. These games tend to take a 1 vs. 2 feeling as the 2 Exiles plan together and combat the Chancellor. While most games don’t play out like this, we found that when a Chancellor won multiple games in a row and was able to set the board up well for him to be able to keep the Oathkeeper tile, the Exiles generally worked together to usurp him, especially at the beginning. This would be fine, but it lead to some unfortunate situations where individual Exiles would purposefully not play to win so that anyone except for the Chancellor would win. Occasionally this play was warranted against on overpowered Chancellor, but it’s upsetting to see a game encourage players to be okay with second place, even if it’s rare.

After teaching people how to play Oath, some loving it and some hating it, this question comes to mind: “Is the juice worth the squeeze?” When playing with players who love it, and when everyone knows the rules, I enjoyed Oath more than many other beloved games in our collection. However, to get those moments of enjoyment, I had to read the picture rulebook 3 times, the hardcore rulebook 2, look at 4 different Reddit and BoardGameGeek threads, and slog through the first 2 games of teaching people how to play. So the rulebook should have been more robust, and players should seriously consider if playing an enjoyable game of Oath is worth the 5+ hours of reading the rules and playing through the first game

Oath does deliver on its storytelling promises, but at a high cost. I play tabletop games in 2 different groups: 1 loves the more light- to mid-weight games like Clank! and Villainous, the other loves heavier games like Gloomhaven and King’s Dilemma. For the former, Oath gets a 6/10 and is probably not worth it; for the latter, Oath gets an 8/10. If this game sounds like your cup of tea, put the teapot on the stove and have at it! However, for a lot of people, it will require too much effort.

A review copy was provided by Leder Games.

Oath's sweet and savory juice will be worth the squeeze to some, but not to all.

I'm a teacher, writer, and board game reviewer. I especially love board games that pull me in like a good book. My wife is my favorite gaming partner.