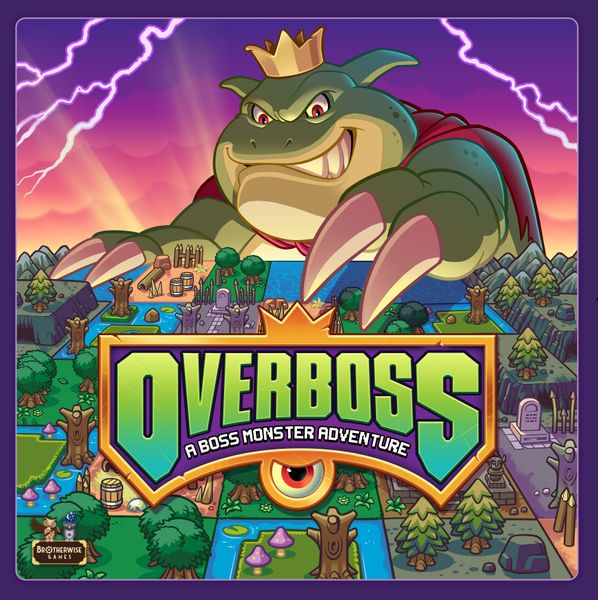 Boss Monster is an innovative game where players bid on dungeon rooms to lure adventurers into their dungeons before their opponents. Overboss takes this notion and applies it to the overworld, challenging everyone to build the best above-ground levels they can. Players in Overboss will choose a tile paired with a monster and place it on their overworld board. Different tiles have different scoring effects, and at the end of the game the Boss with the most points wins. So is it another hit for Brotherwise Games, or is it just another overbearing boss? Read on for our review!

The monsters in Overboss include vampires, skeletons, kobolds, witches, dragons, orcs, and other fantasy archetypes. The bosses themselves include a genie, a mummy, a giant toad, a walking bomb, and a lich. All of them are pixelated, and none of them feel too serious or “scary”. All the non-boss monsters are small, and just a few pixels. A few of the tiles have glowing red eyes. One tile type is a summoning circle that lets players swap tiles. 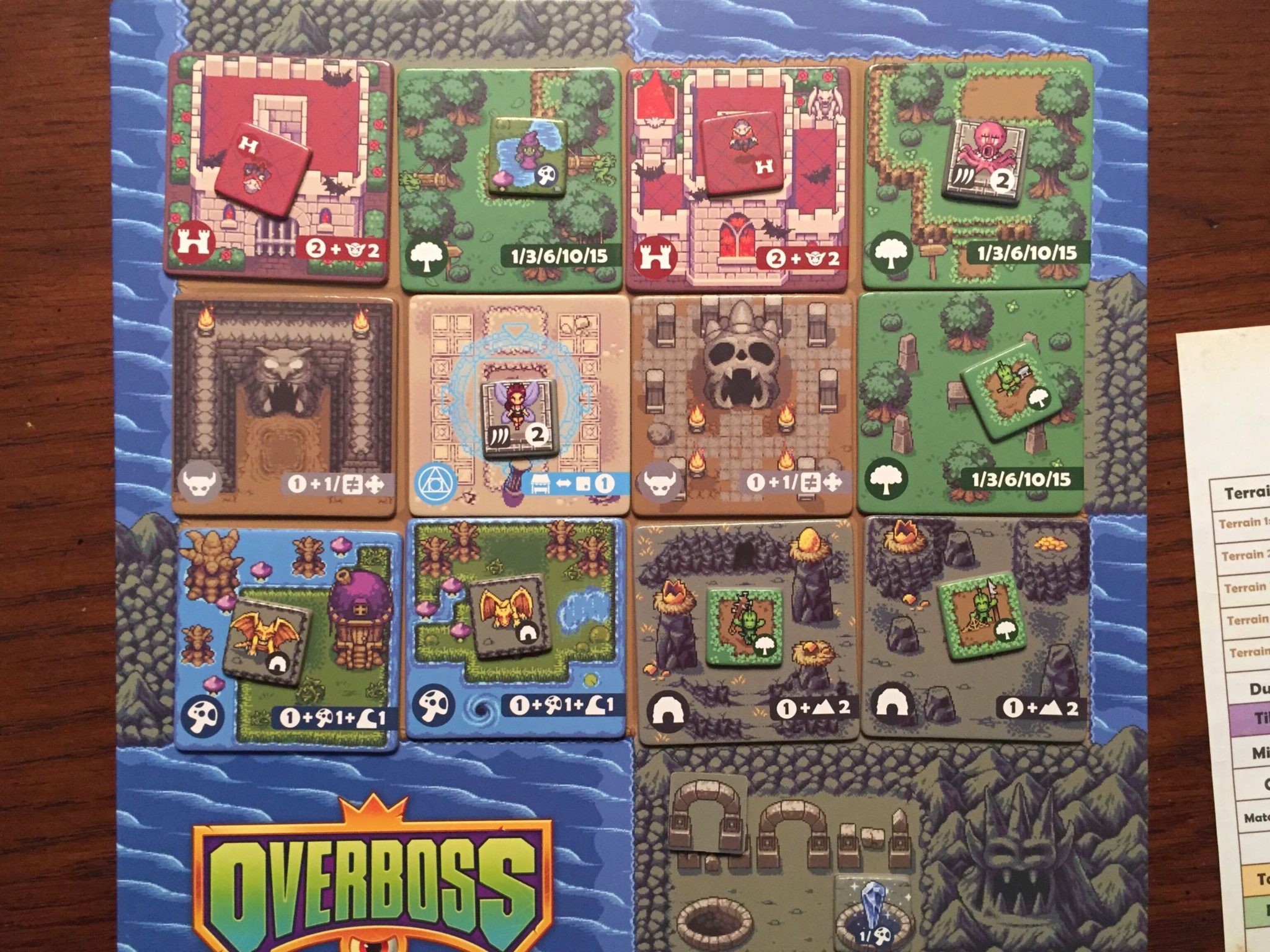 My Overworld after a 3-player game.

Overboss has a fairly simple ruleset: on your turn you choose a tile and monster token from the market, and place them somewhere on your overworld player board. After everyone’s boards are full, scores are tallied and the player with the most points is the winning boss monster. However there are several different ways to score, and even if someone corners one part of the market no one is likely going to be left out because of a bad round.

The market always has 4 options; it is replenished each turn. Monsters are drawn from a bag which also contains Minibosses, Crystals, and Portals. Minibosses give you a straight 2 points, but don’t contribute to any Monster Bands (rows or columns of matching monsters that give you more points). Crystals give you a bonus for each tile you have of that type, and Portals allow you to move up to 2 different monsters around on your board.

The Market. Notice the kobold and the witch on the outside left and right match the tile they are paired with; each will give the player more points at the end of the game.

Tiles themselves come in both basic and advanced flavors. Basic ones include Forests, Graveyards, Orc Camps, Caves, and Swamps. Advanced tiles are Castles, Volcanoes, Summoning Circles, Deserts, and Cloud Islands. Only 5 of these are used each game. The rules suggest playing first with just the basic tiles before adding in advanced ones, and the game includes cards that can be used for a random setup.

The wide variety of tiles in Overboss give it lots of variability. For instance, Caves give you 1 point, plus another 2 points if the Cave tile is bordering a Mountain. Forests give you points for how many of them you have, and Graveyards give points to the 2 Bosses who collect the most of them. Some of the advanced tiles are more tactical: the Summoning Circle is only worth 1 point, but allows players to exchange a monster or token on that turn, and Cloud Islands can be worth a lot of points but only if you don’t have a lot of variety (they are worth 7 points, but -1 point for each non-Cloud Island tile type you have). 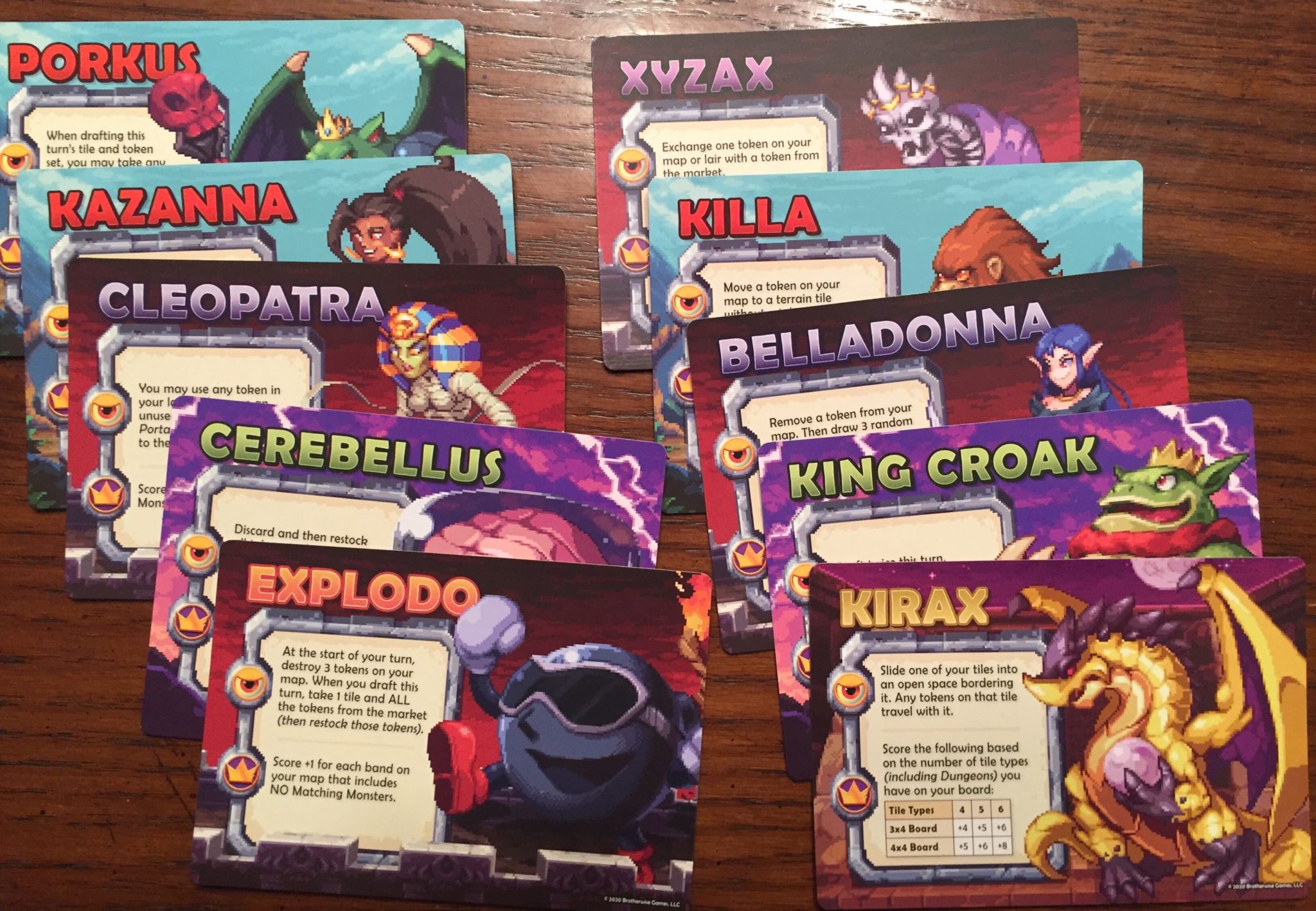 So after scoring your tiles, you also count up your points from Minibosses, Crystals, and Matching Monsters – you get 1 point for each monster who ends the game on their preferred tile type. You also get points for Bands of Monsters. Happily, the game’s iconography is on point, which makes it easy to see which monsters want to be where. Also, Brotherwise Games was kind enough to include a scoresheet, making it easy to tabulate everyone’s totals. They also continued their tradition of including a Gametrayz insert, which nicely holds all the tiles and monsters in place. 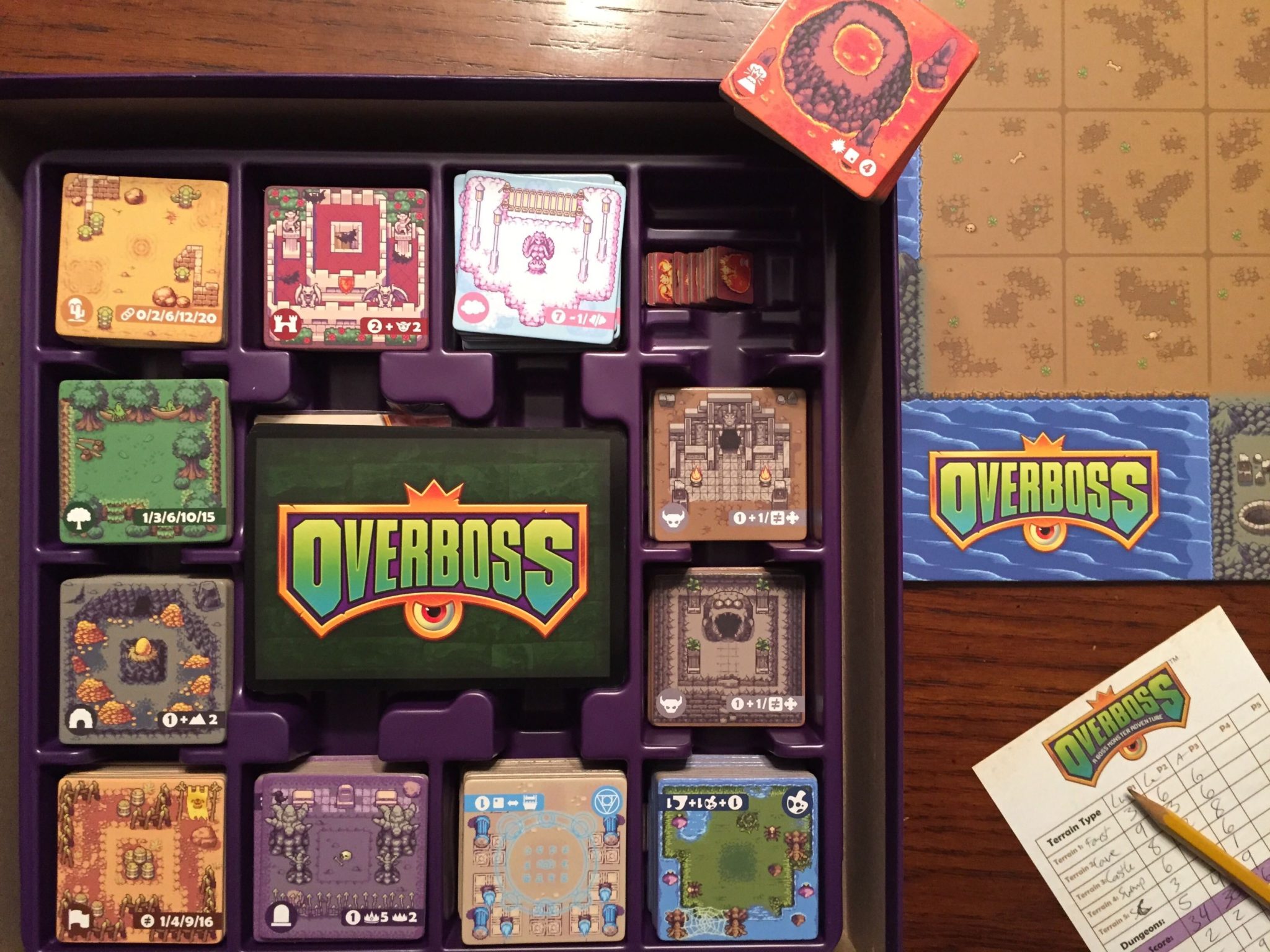 The tiles all snug in their box.

I really enjoyed playing Overboss, and it was quick and easy to explain and play with my children. The pixel-art makes it inviting for a variety of gamers, and the simple structure makes it accessible. For those who like a little more “take-that” with your tile-laying, they also included some advanced variants. Each player board is double-sided, so players can play on the classic 3×4 side, or try the 4×4 big board for a longer game. Boss Cards are also included if you want to give each player a different ability and scoring objective. Finally, Command Cards are for players who want to really mess with one another’s board. Before the game, 4 Command cards are dealt out next to the market, and as soon as a player completes the pattern shown they may activate the card and Intimidate (slide a tile), Demolish (destroy a tile), or Overthrow (swap or move tokens) their opponent’s tiles. And if that wasn’t enough the game also includes 2 solo modes: High Score mode, for a single-session game, and Campaign mode for an ongoing challenge. 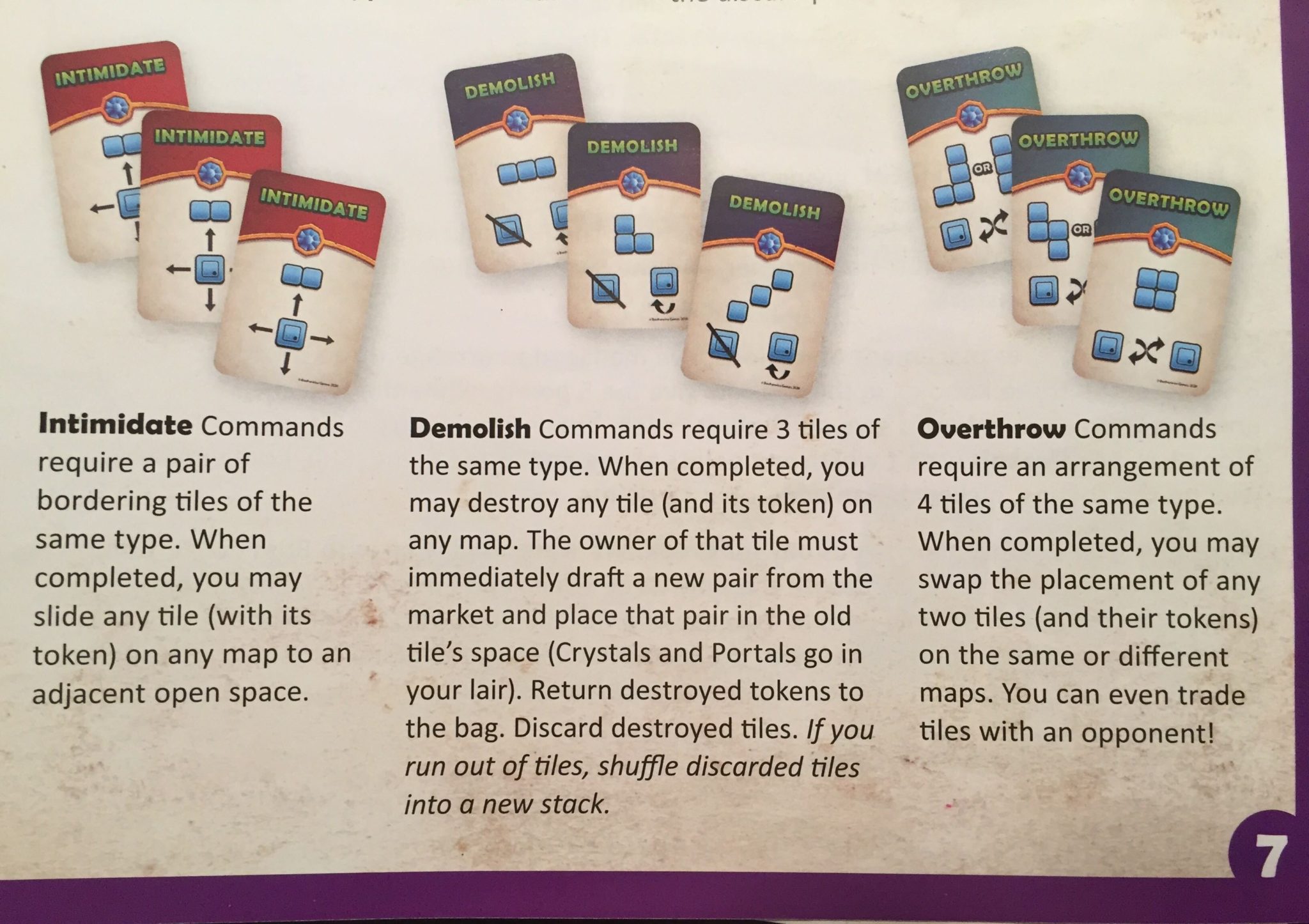 Easy to set up, play, and augment, Overboss is a great example of the right way to revisit or reimplement a game idea. Fans of Boss Monster and tile-laying set-collection games should definitely check this one out.

Fans of Boss Monster and tile-laying set-collection games should definitely check this one out.