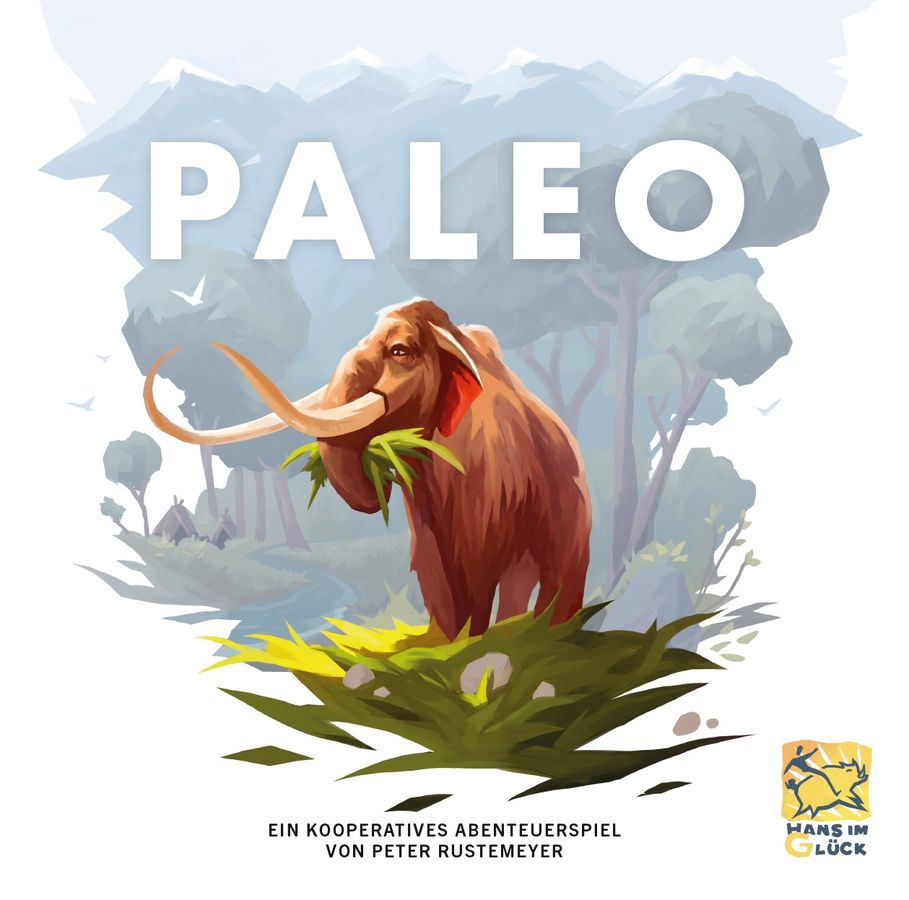 Paleo is a cooperative game of Stone Age survival. In this game, players work together to gather resources, overcome challenges, and develop the foundation of mankind. With various decks of cards that can be mixed and matched, it offers a great deal of variety, but how does it compare to other cooperative games? Read on!

In Paleo, players represent early tribes of humans fighting for survival. As they forage for sustenance and face all manner of difficult tasks, their goal is to earn 5 points as a team.

This game is heavily card-based, and it includes 10 different modules/decks that can be used to create different scenarios. Typically, 2 of the 10 modules are used in each game. Additionally, there are several other sets of cards that are used in every game, including the People, Ideas, and Dreams decks. Different cards often have different backs, and this is an important part of the game. 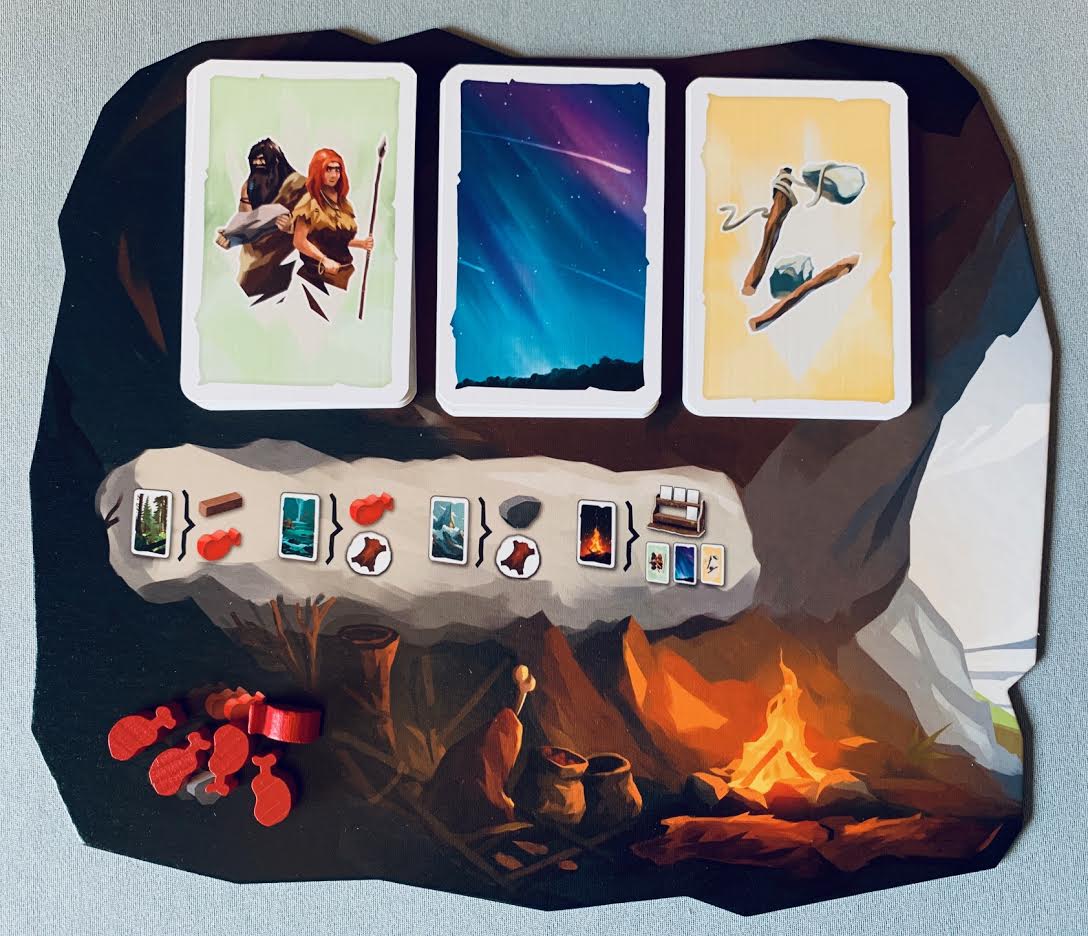 To begin the game, the deck of basic cards is combined with the 2 chosen module decks. These cards are all shuffled together and dealt out among players.

The round structure is divided into a Day and a Night phase. Players scavenge during the Day phase, hunting for food and resolving encounters. Then, during the Night phase, they feed their people and prepare for the following day.

As you would imagine, the cards that look like a red hellscape tend to be bad.

Players take their turns simultaneously. To begin the Day phase, each player examines the backs of the top 3 cards of their deck – again, there are many different card backs, and some even have special symbols/clues on them, hinting at what might be on their other side. From these 3 cards, each player chooses 1 to use and places it face-down in front of them. 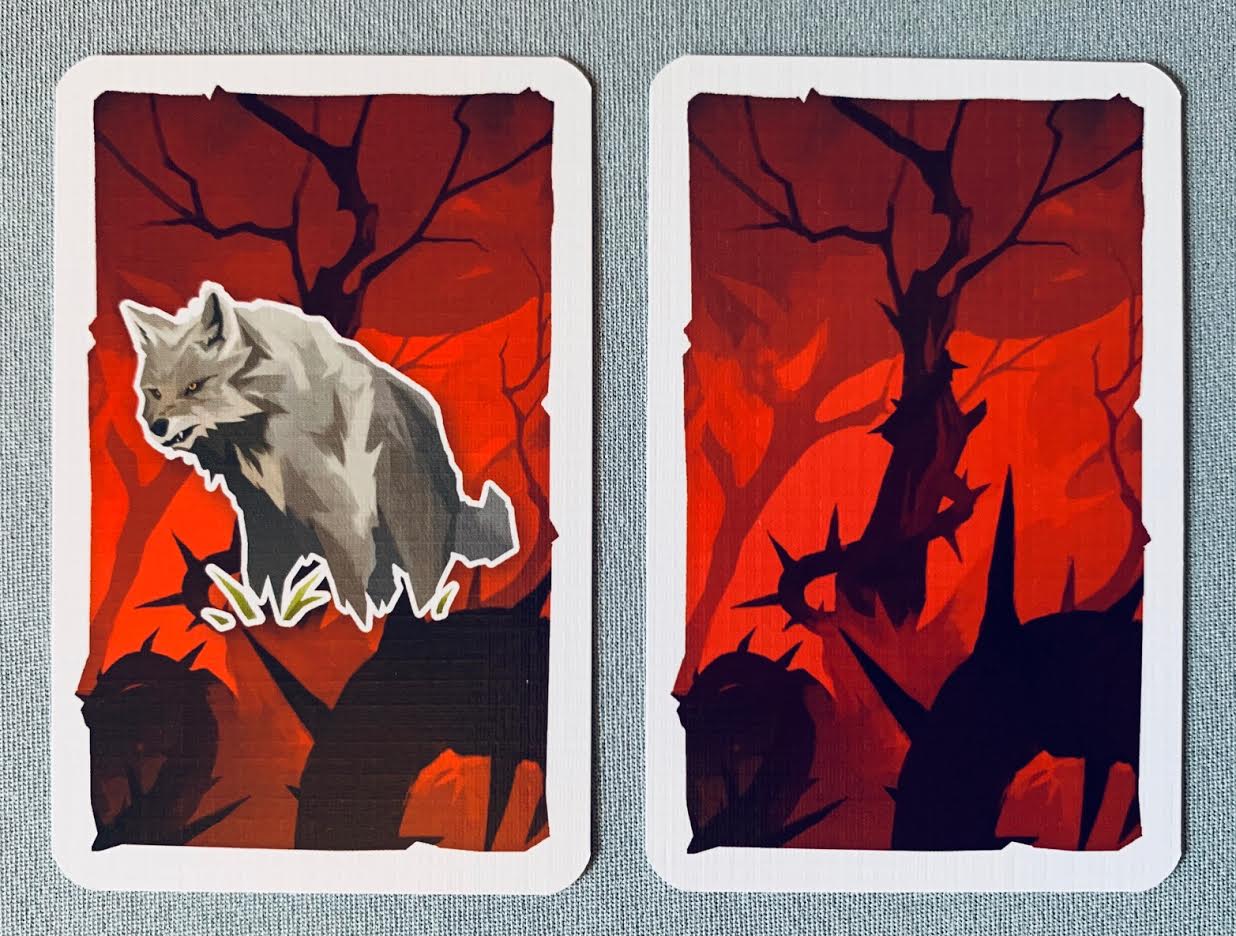 Here, we have two red cards, but one bears a wolf on it. What could it mean?

When everyone has done this, all players reveal their chosen cards and select an action to resolve. Players repeat this process of blind-selecting and revealing cards until everyone’s deck is exhausted. At that time, the Day phase ends and the Night phase begins.

The actions a player can take depend upon the card they played. Many cards have simple input/output actions like “Discard X cards from your deck to collect Y resources,” or something along those lines. Action cards can also be spent to help another player. In that case, all of the assets belonging to the person playing the card (their abilities, item tokens, etc.) become available to the player being helped.

Card backs typically indicate what a player can hope to find on their front sides (e.g. Forest cards often yield wood or food, Mountain cards often yield stone or pelts, etc.), but not always. From time to time, players will encounter Hazard cards, which usually have negative results. Sometimes, players can escape the consequences of a Hazard, possibly even getting a good outcome, but more often than not, Hazards end badly.

Each player begins the game with 2 People cards in front of them, face-up. People cards each offer an ability (the icon in the lower-left corner), and they each have a certain number of life points. When a character takes wounds (as the result of a Hazard card, for example), they assign a wound token to the character card. When a character loses his/her last life point, they die and a skull token is placed in the central tableau. If the players collect 5 skull tokens, they lose the game.

During the Night phase, all characters must eat. Players collectively discard 1 food resource per character in play. If there is not enough food for everyone, each unfed character earns a skull token. 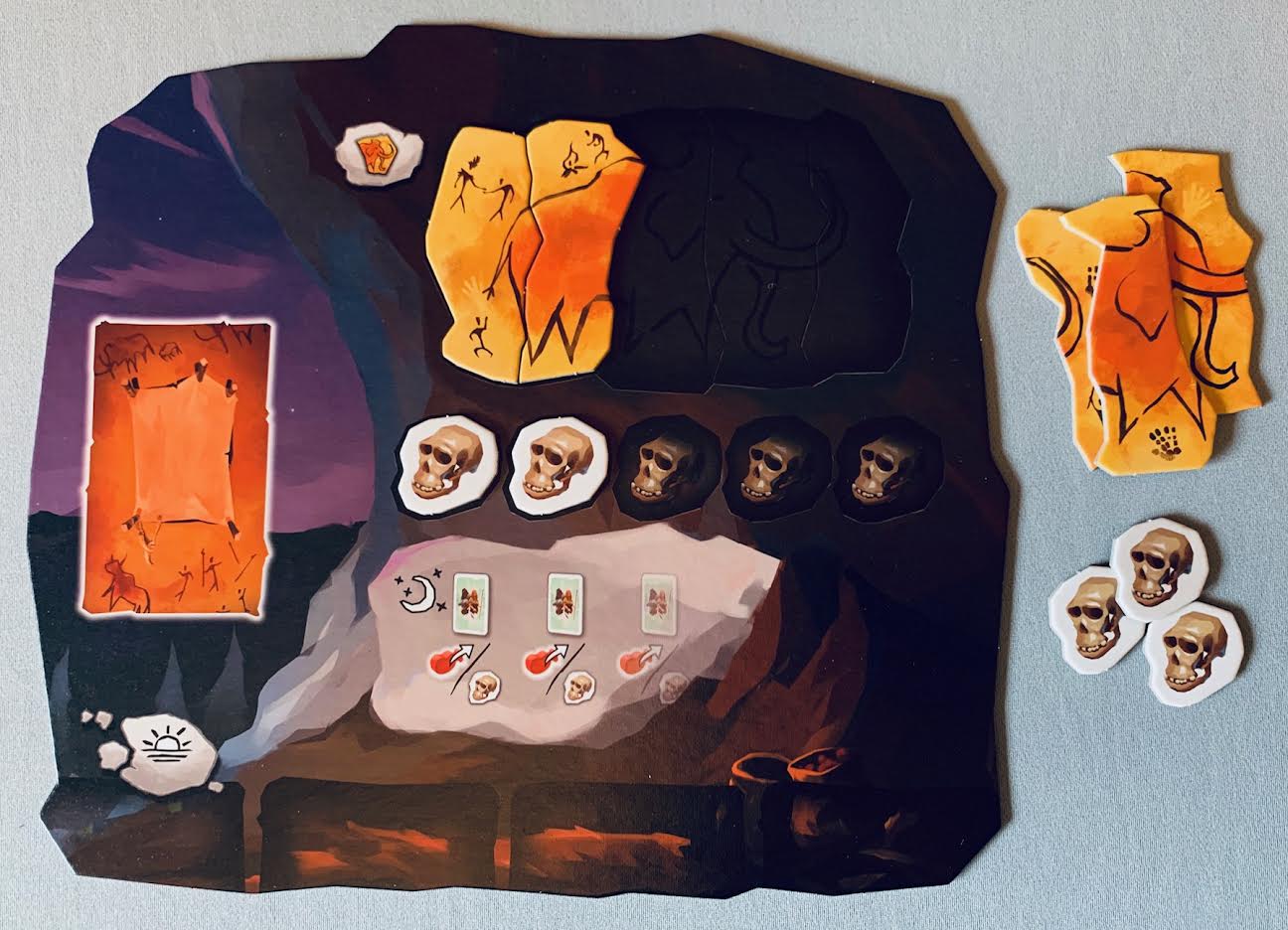 Pieces of the cave painting are positive points, skulls are negative points.

Players also have to contend with the requirements of Mission cards. Each module contains a Mission, and like Hazard cards, they tend to end badly unless players accomplish some objective (e.g. “Discard X resources or take Y penalty”).

Some cards make players roll dice, which increase the difficulty of challenges.

At the end of each Night phase, all the cards are shuffled together and redistributed among players. This means players all have a new set of cards to work with each day.

The game continues like this until players earn either their 5th point or their 5th skull. At that time, players win or lose, respectively.

Paleo is a solid cooperative game with some ideas I have not seen before. In particular, the notion of using card backs to give clues about what the other sides may contain feels fresh, not to mention thematic. Players will understand that choosing a card with, say, a forest background narratively means they are exploring the forest. Likewise, a mountain card means they are venturing into the mountains, etc. It makes sense, and the fact that the outcome is unknown further plays to the theme.

While I enjoyed the mechanism of choosing a card based solely on its back, I can see some people not liking it. If someone picks a card that they expect to be good, but it turns out to be a trap, they may feel like they are getting punished for no reason. However, since Paleo is fully cooperative, all players share in the penalty when this happens. What’s more, these random surprises keep things interesting. If they were not part of the game, players would never have trepidation about their decisions, and in my opinion, this would be a major loss.

Paleo looks nice on the table, but the box seems a bit too big for what it is: basically a card game with some extra components. The 3D card/token rack is particularly attractive, but without it, the game could have almost certainly fit into a Splendor-size box rather a Ticket to Ride-size. Still, Paleo‘s presentation looks cool, very colorful and inviting. 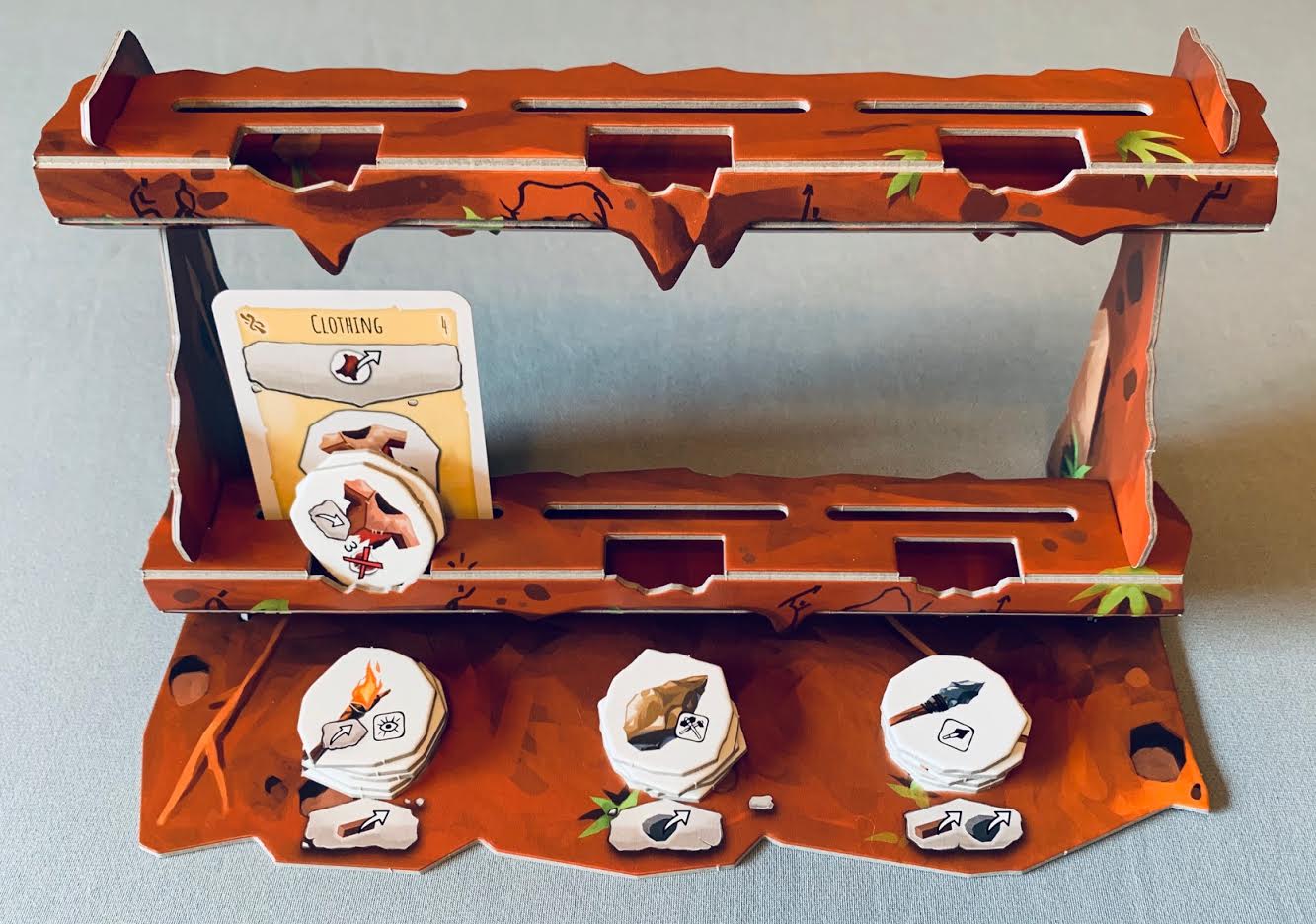 I like that this game deviates somewhat from the standard co-op formula of “Do good actions and suffer negative effects.” Players of course have to contend with bad stuff happening throughout the game, but Paleo feels like it approaches the co-op genre differently. (I’m finding it hard to explain exactly how it does this, but it’s just the overall vibe I get from the game.)

I’ve seen some comparisons of Paleo to the much heavier Robinson Crusoe: Adventures on the Cursed Island, and I tend to agree that they have some similarities. However, whereas Robinson Crusoe‘s rulebook is about 8,000 pages long, Paleo‘s is only 12, including a detailed example of play. It is a much simpler affair than Robinson Crusoe, so players who are interested in that game but intimidated by the amount of stuff going on might want to check out this one instead. It’s pretty straightforward, and its 10 different modules give it lots of room for surprises and replayability.

Paleo has some ideas that I have not seen before. Recommended for fans of co-ops, or as a lighter alternative to Robinson Crusoe.