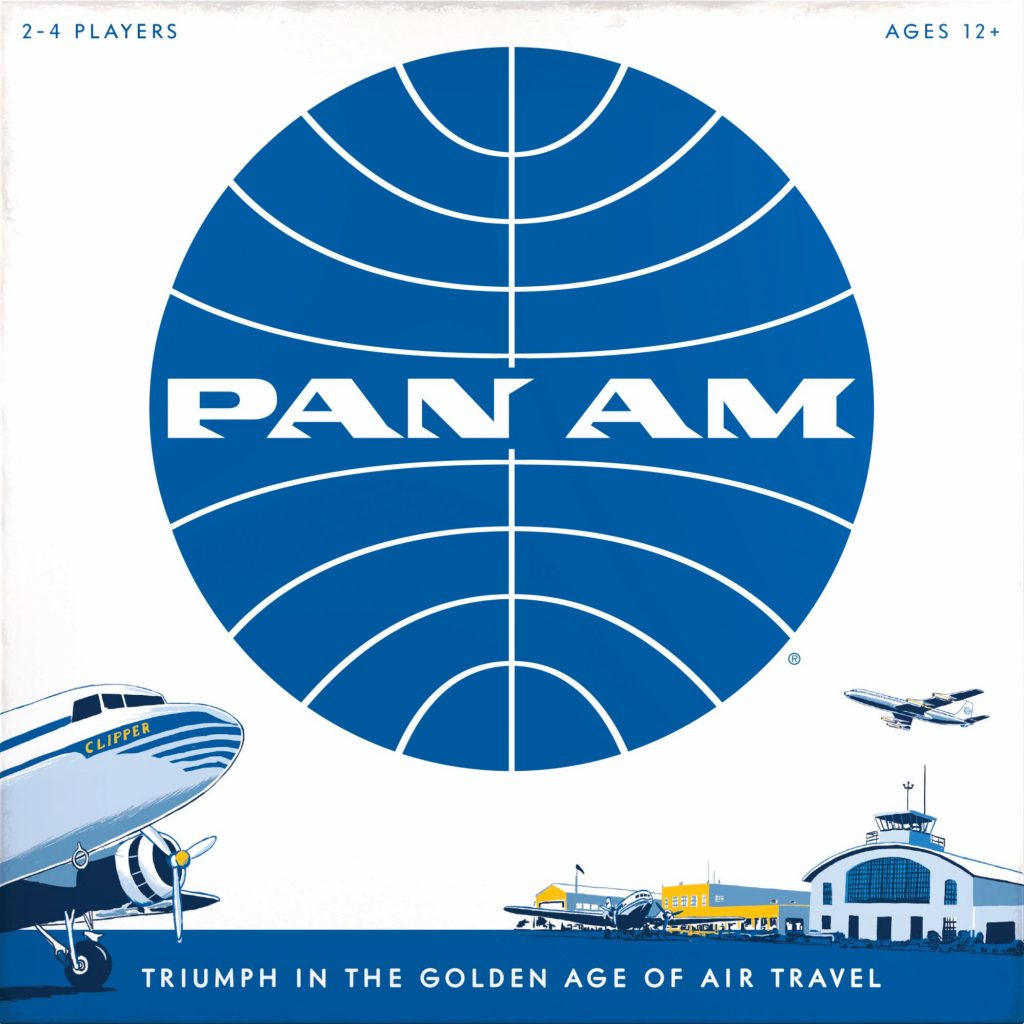 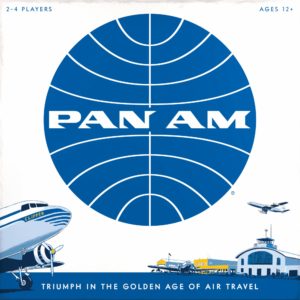 Pan Am takes players back to the golden age of air travel. In this game, players build airports and airline routes around the world, connecting cities to earn income. As Pan American Airlines expands, it will buy routes – possibly ones built by the players – which can earn a significant profit! This is a deeply strategic game which combines worker placement, route building, and stock buying.

Pan Am invites players to experience the early days of commercial flight. In this game, 2-4 players take on the roles of early airline companies – building, expanding, and often selling routes to the steadily-growing Pan American Airlines.

The goal of the game to have the most stock in Pan Am, something players accomplish by claiming destinations, buying and selling routes, purchasing planes, and building airports. In each of the 7 rounds, players have the opportunity to buy stock, but it is usually unwise for someone to just dump all their money into shares. After all, airlines need cash to grow their business, and when Pan Am purchases a route from a player, it can mean a huge payday!

The game is played out on a large map board with dozens of airline routes for players to acquire. 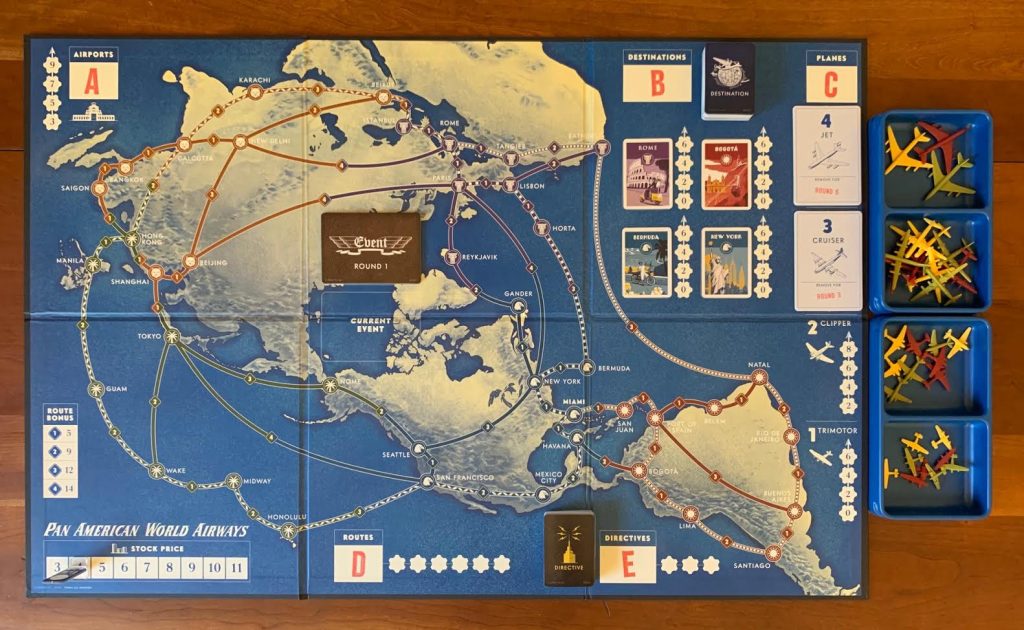 Around the edge of the board, areas identified with the letters A-E offer worker placement spaces for player pawns. When it comes time for action resolution each round, these areas are resolved in order. Additional planes are stored in the blue plastic trays next to the board. Throughout the game, players can grow their fleet by purchasing extra aircraft.

At the start of each round, an event card is revealed. 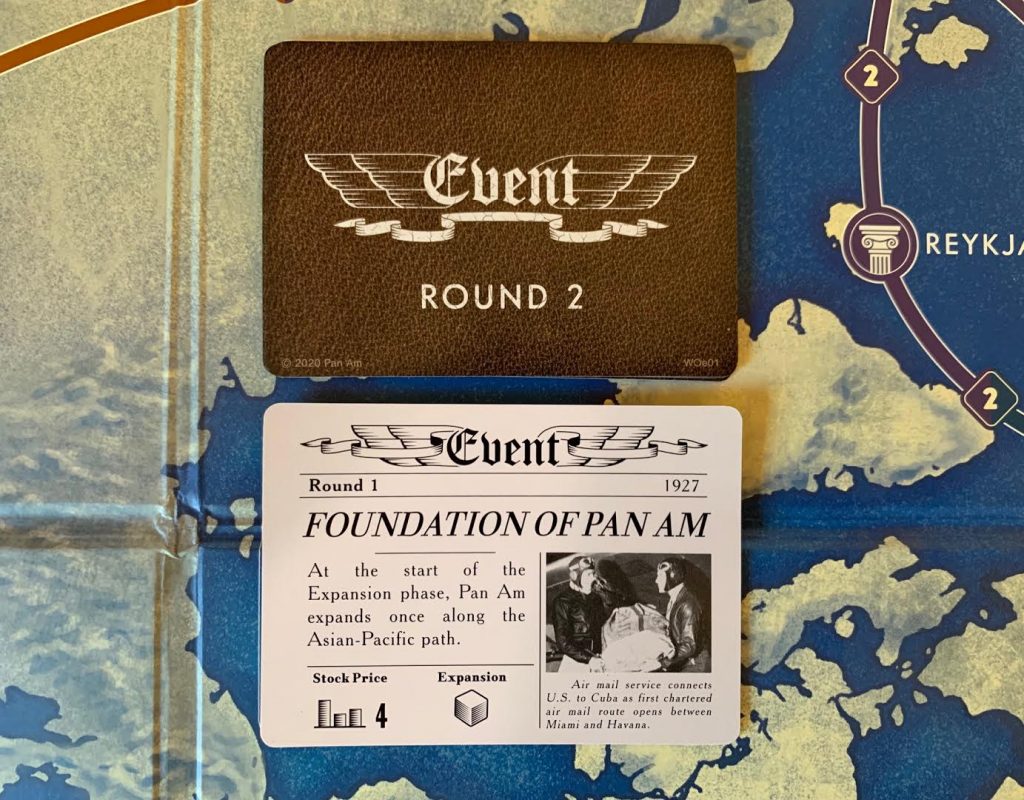 Each event provides a special rule that pertains to the current round. It also establishes/changes the stock price, and it determines how many times the Pan Am die will be rolled at the end of the round. 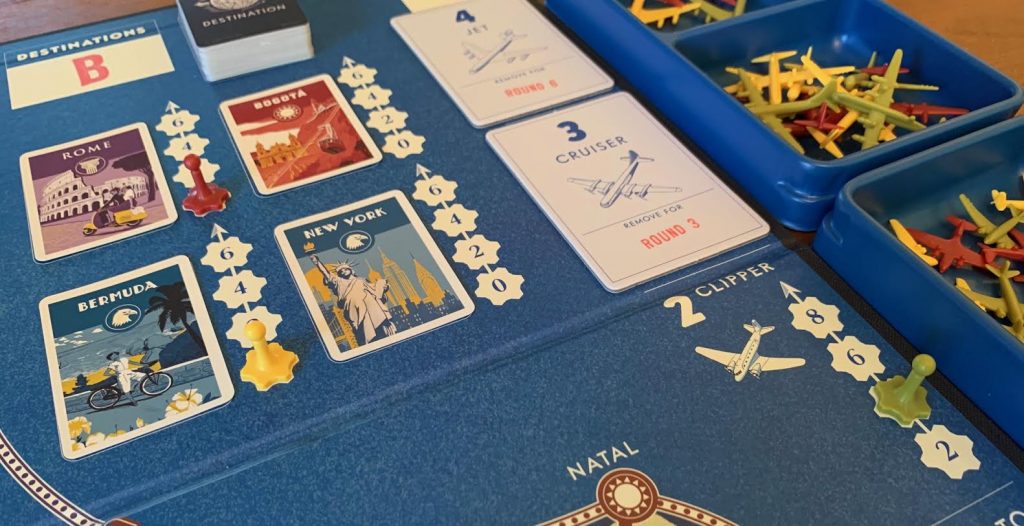 An example of workers placed on action spaces.

As shown above, many action spaces lie in columns of ascending values (e.g. 0-2-4-6 for the city cards or 2-4-6-8 for the Clipper planes). Players bid for these actions/rewards by placing their workers on the amount they are willing to pay for them. Only 1 worker can claim each such reward per round, which means, for example, that only 1 plane of each type can be sold, only 1 airport placed, each city card can only be purchased by 1 player, etc.

If a player gets outbid by another worker, they retrieve their pawn and place it again. (If you have played Stockpile or Homesteaders, this works like the bidding in those games.) Notice how the green pawn above is on the “4” space of the Clipper bidding track. We can assume someone was on the “2” space before, and green outbid them, knocking their pawn off.

The actions for claiming routes and taking special ability cards (called “Directives”) can be performed by multiple players each round, but they are executed in order of placement. For instance, the first pawn placed on the “Claim a Route” action gets to choose first, then the second pawn, etc. 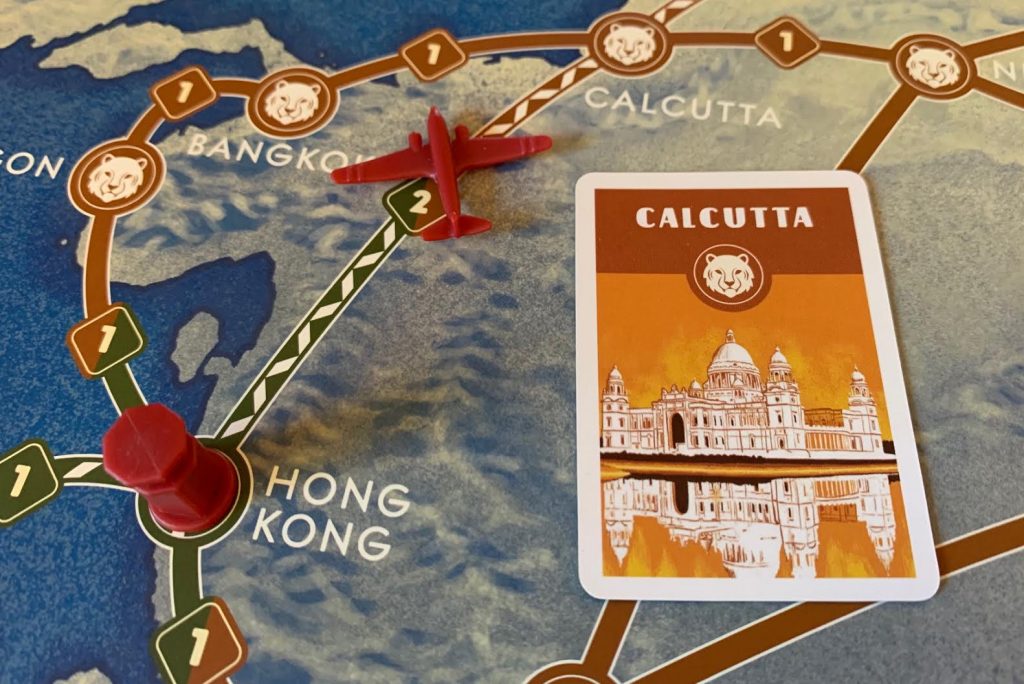 Here, the red player has claimed the route connecting Hong Kong and Calcutta. He has an airport in Hong Kong, so he automatically has landing rights there, but he also holds a Calcutta destination card, so he has those landing rights, as well. If he didn’t have this card, he could discard a different orange card, or two cards of another color instead.

The number shown on a route determines the minimum size of plane required to claim it. A 3-length route, for example, can only be claimed by a size-3 plane or larger. In the illustration above, the route claimed has a length if 2, and the player used a size-2 plane (Clipper) to claim it.

Each round, Pan Am’s footprint grows as it buys routes. The company begins in Miami, and it steadily swallows up routes, moving outward from this city according to the result of a die roll. As an example: 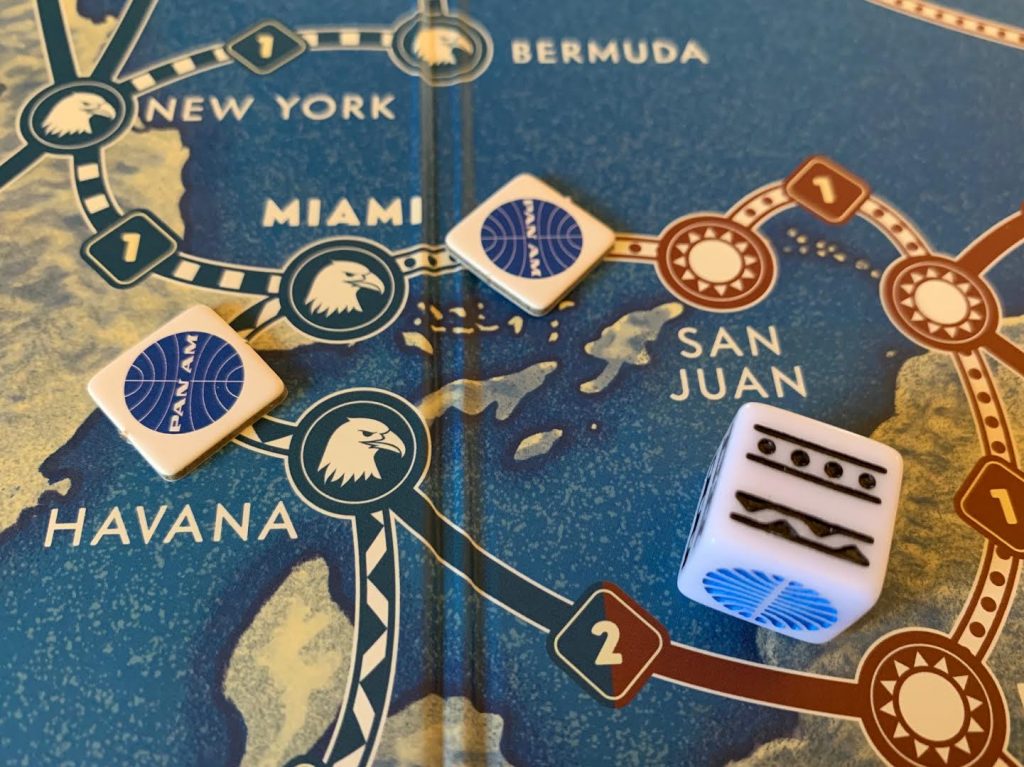 Notice how there are 3 patterned routes extending out of Miami. When matching routes show up on the die roll, Pan Am acquires the next segment of each route that it doesn’t already own. If the Pan Am symbol gets rolled, players can sell routes anywhere on the board.

Anytime a player owns a route being acquired by Pan Am, they must sell it. This lowers the income they receive each round, but it offers them a one-time cash payout.

Each player has their own personal tableau mat that tracks the planes they have available in their fleet and the income they receive at the end of each round. Anytime a player claims a route, their income increases according to its length. For example, if a player purchased a 3-length route, their income marker would move up 3 spaces. Likewise, if Pan Am purchases a route from a player, that player’s income goes down the length of the route.

At the end of every round, players earn income based on where their markers are. After that, they each have the chance to purchase stock in Pan Am. 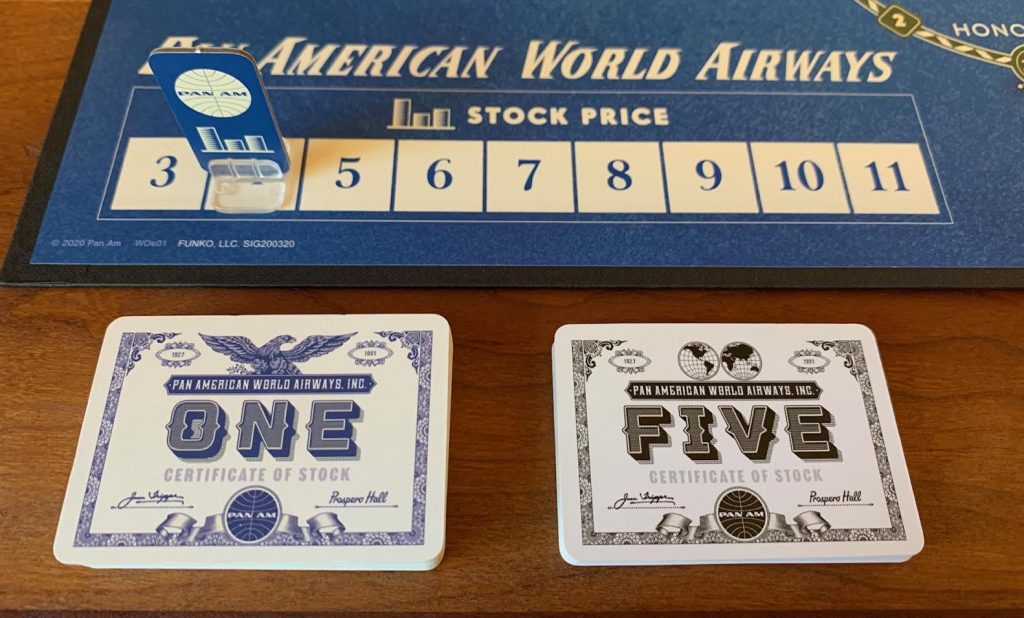 Event cards make the stock price fluctuate throughout the game, so players need to consider the appropriate time to grab shares. At the end of the 7th round, the player with the most stock wins!

I have played many games by Prospero Hall/Forrest-Pruzan Creative over the years, and I can confidently say this is the most “gamer-y” one I’ve tried. Pan Am is a midweight economic game, one that I suspect will appeal to fans of euros. It is not terribly complex, but its learning curve might be a bit much for a brand new gamer; I would compare it to something like Stone Age.

There is a lot to like about this game. First of all, the graphic design helps the mechanisms feel intuitive. By just glancing at the board, someone who has never played would be able to guess, for instance, that the stuff in Section A happens first, then Section B, etc. Additionally, there are some interesting nuances that don’t reveal themselves immediately. For example, though many of the routes on the board are patterned, meaning they are in Pan Am’s path of expansion, many are not. The route lines with no pattern will only get bought by Pan Am if a player chooses to sell them when the Pan Am die result comes up. What’s more, these are some of the best routes on the whole board!

Most worker placement games have a sort of “throwaway” action, that lame thing players can do if no better options are available (e.g. the “Take a coin” actions in Viticulture or Pillars of the Earth). I think my favorite thing about Pan Am is that its “throwaway” action is awesome. The deck of Directive cards has amazingly powerful stuff in it, and any pawns placed on the Directive spaces get priority placement in the coming round. (I realize I didn’t mention that before.) What would typically be considered “the useless space” is awesome in this game.

Pan Am‘s production is very nice. The star of the show of course are the plastic planes, which are just as much fun to play with off turn as they are to actually use in the game. The rules are clearly written, the artwork is retro-stylized, and the oversized board makes the game feel big. All in all, an attractive product.

Pan Am is yet another solid offering from Prospero Hall and Funko Games. I recommend it, especially for fans of economic games!

A review copy was provided by Funko Games.

Pan Am is a robust design, with some new and unique ideas. Recommended, especially for fans of economic games.