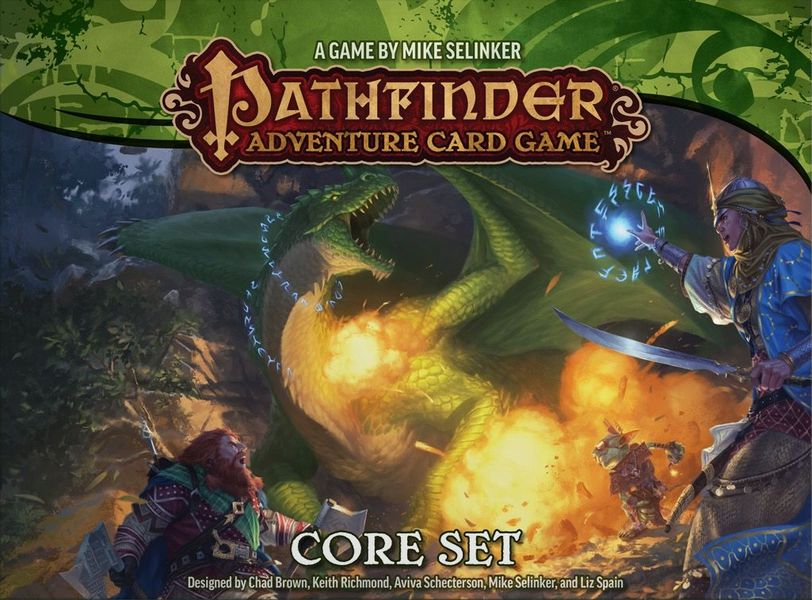 Belhaim’s tower has collapsed, its wizard is missing, and kolbolds are whispering the name of a long-dead draconic nemesis. And it’s just your first day in town…

The Pathfinder Adventure Card Game takes many of its classic characters and settings from the Pathfinder Role-Playing game and re-formats it in a way that 1-4 players can play cooperatively (in the Core set) or up to 6 with the Curse of the Crimson Throne Adventure Path. 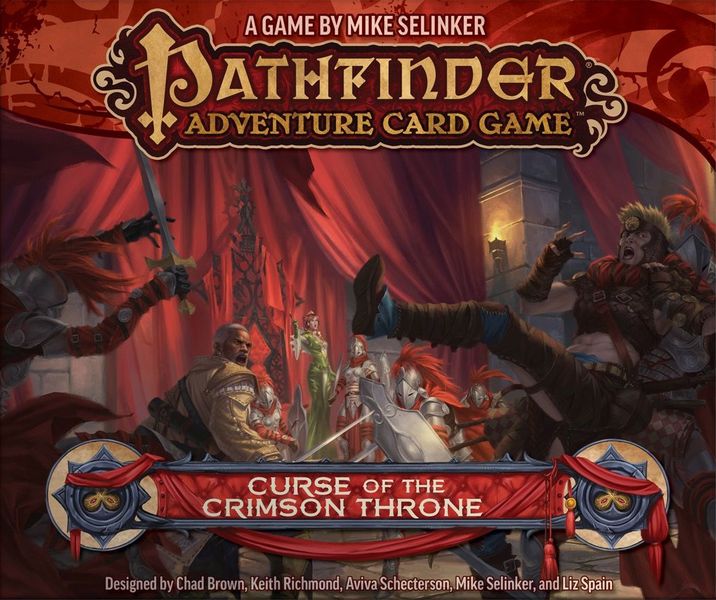 As it is a high-fantasy adventure game, characters and NPCs alike can wield magic and magic-infused items to help, hinder, attack, or kill their opponents.  Demons, Vampires, undead, and other supernatural evils and rituals can be encountered.

Characters can take damage, die, or kill and attack others. Some of the art in the adventure path pages depict scenes of action or violence, usually right before something happens (characters mid-swing of a weapon, or mid-leap of an attack). A couple pages near the end of the Crimson Throne story depict a blood sacrifice.

One important NPC has a low-cut dress showing maximum cleavage. A different enemy type is an undead female with what looks like skin-tight armor. 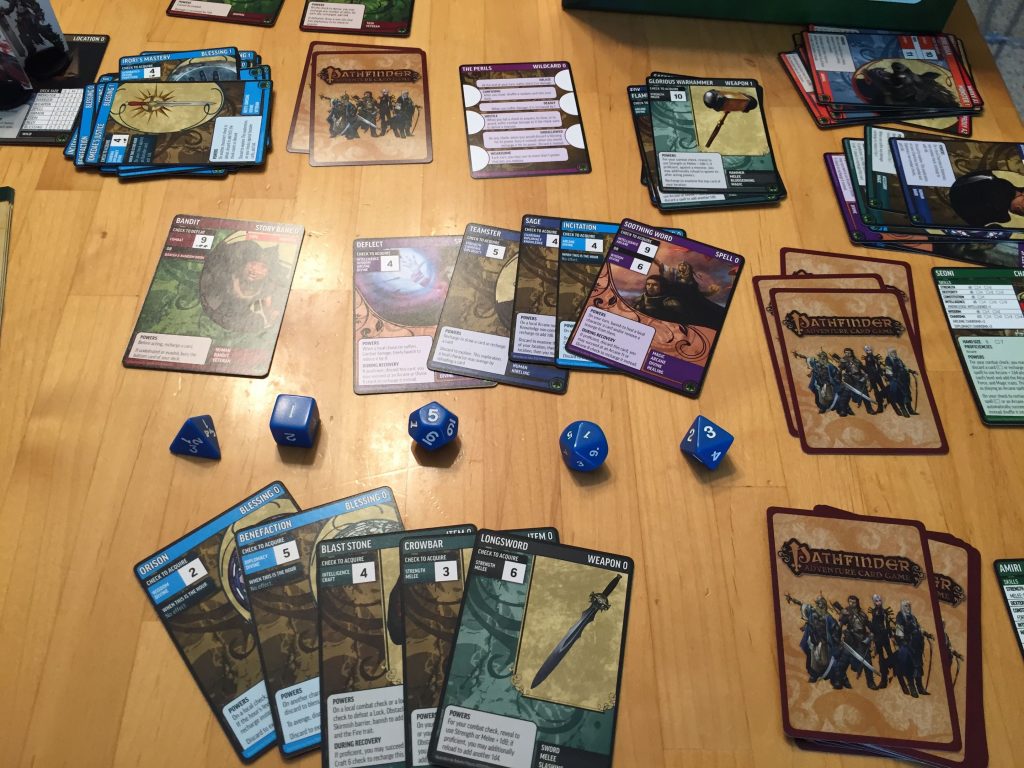 Role-Playing games in their tabletop form can be dense, and difficult to get into without a dedicated group to play with. The Pathfinder Adventure Card Game attempts to alleviate some of those problems, with mixed results. By turning an RPG into a strategy card game, Paizo has made it so a solo player or group can dive into the Pathfinder world without the need for a Dungeon Master or a stack of expensive books. However they would still need to read the very dense 32-page rulebook, and follow the instructions on top of that found in the adventure path book. 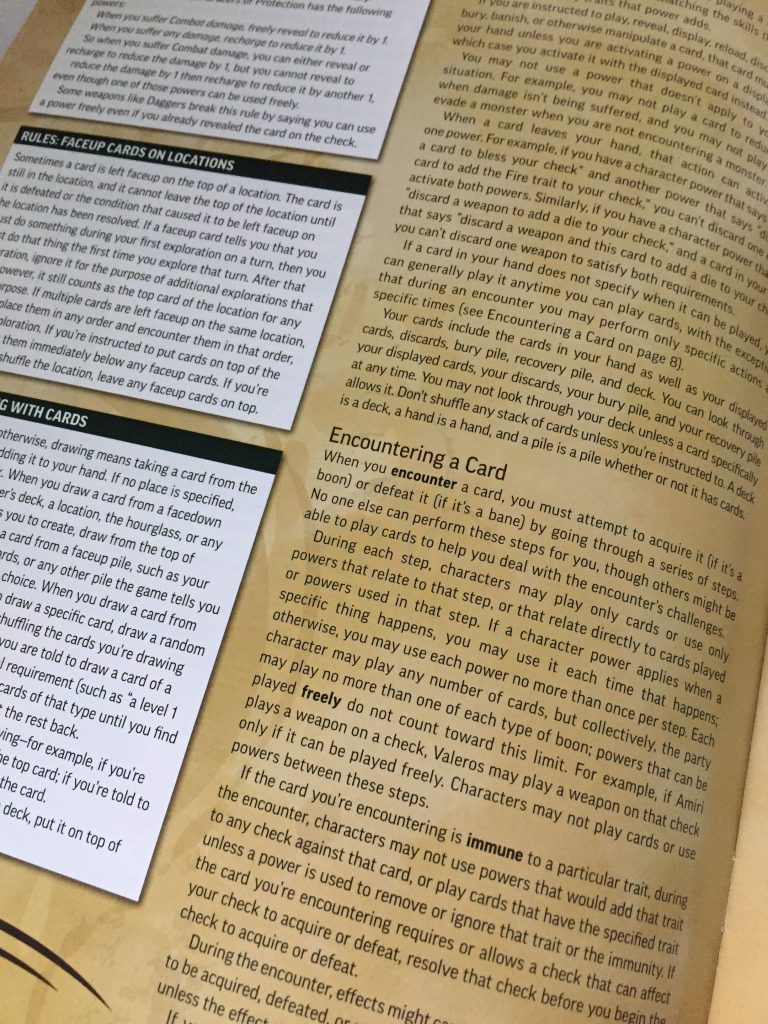 An example of the packed rulebook, with my least-favorite sentence dead-center: “A deck is a deck, a hand is a hand, and a pile is a pile whether or not it has cards.”

The rulebook itself is a long read, but it also expects you to read each and every white sidebar, which explain vital rules you need to set up and play. Only after much reading and re-consulting of the rules was I able to set up and play my first game.

Setup is aided by the deck proclaiming “Open this first!” although ironically my review copy was missing this deck at first. Hoping to hear that Paizo’s customer service is shipping the replacement any day now. Once you’ve opened the aforementioned deck, it has everything you need to play the opening scenario, so you don’t need to organize all the other cards—but I totally did. Bottom line here is don’t get this game out and expect to play 5 minutes after everyone arrives to play; you’ll definitely want a solo or practice game or three.

Getting everything set up involves getting all the decks ready: locations, story banes, hourglass (how you mark time passing), and character decks. Each character has a character card and deck instead of a character sheet. The locations have to be seeded based on how difficult you want the encounter to be—each location can be set up as either small, medium, or large, each with their own count of how many monster, barrier, weapon, spell, armor, item, ally, and blessing cards they contain. In case it hasn’t been made apparent, keeping your Pathfinder cards well-organized will be key in enjoying a well-run and smooth game. Gameplay consists of each player flipping over a location card on their turn, and using their skills and dice to encounter it. 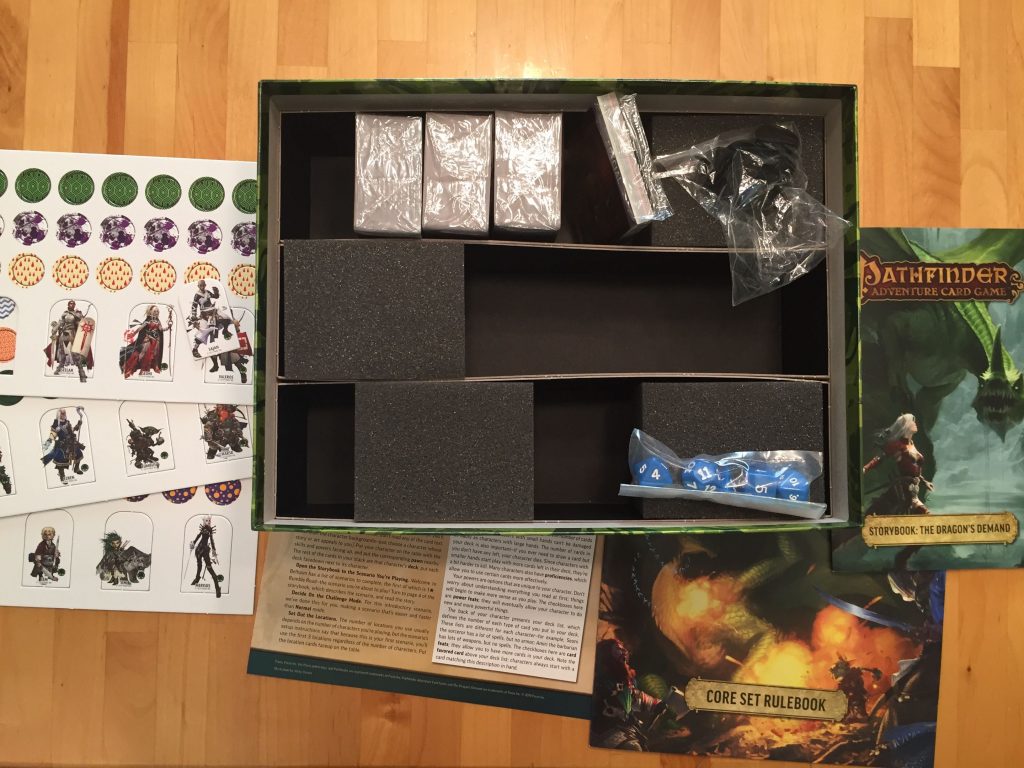 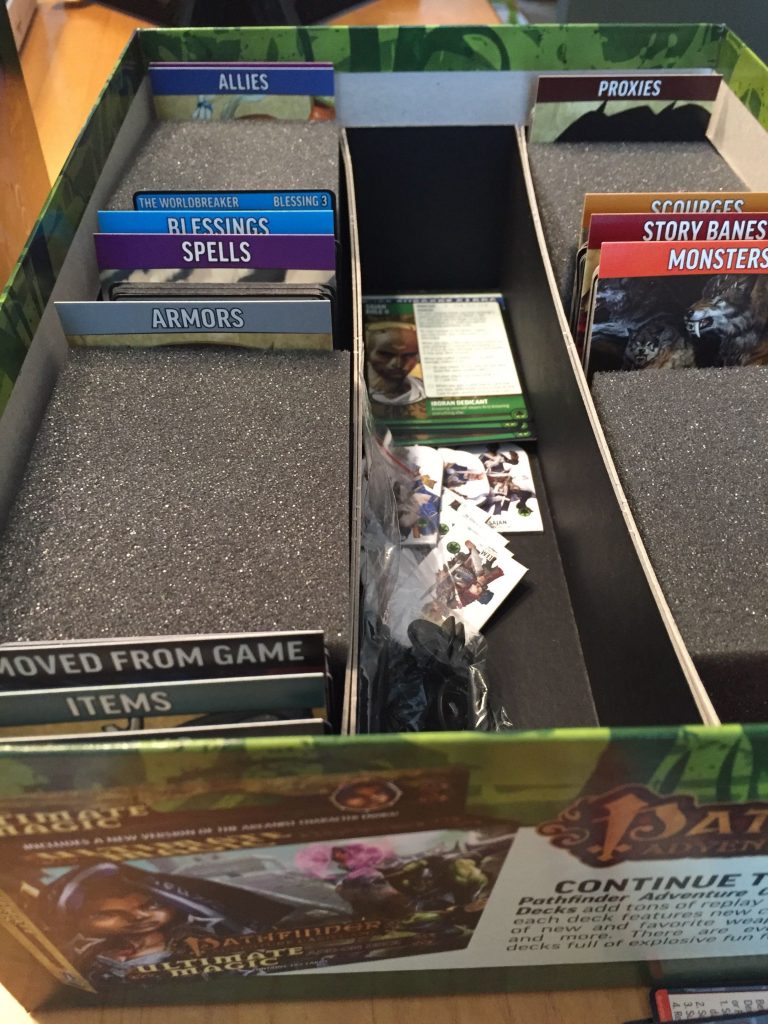 Instead of hit points, characters’ decks represent their health. Taking damage means discarding cards, and should a character not have any more cards to draw they are considered dead. This makes for interesting gameplay situations where you may want to get rid of some chaff or get lower in your deck where you suspect a favorite card is, but you don’t want to push it so far that you end up dead.

The story line in the core adventure is fairly standard “help the townsfolk” fantasy fare, with a slight twist ending. In the Crimson Throne adventure, you’ll have considerably more curve balls thrown at you—in part because it’s twice as long. The Core set comes with 440 cards and a 24 page adventure; the Crimson expansion comes with 550 cards and a 48 page adventure, as well as allowing you to play with up to 6. When you compare the contents, it feels as though their price points should be switched. 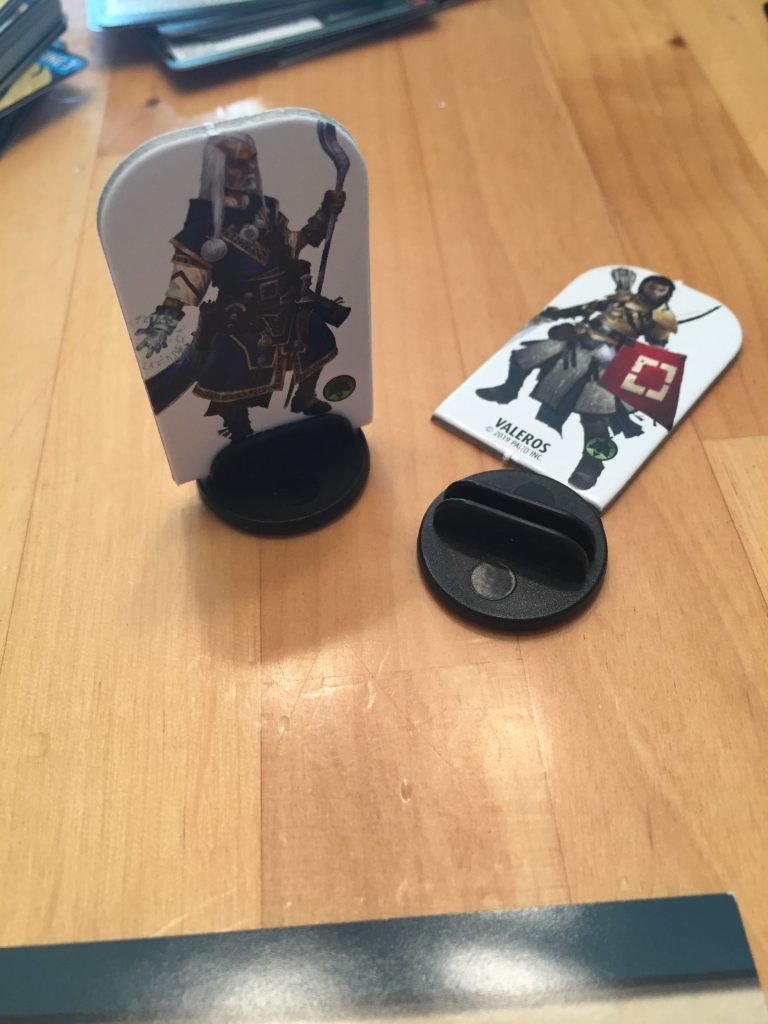 Minor annoyance: when you use the plastic stands for your characters, you can’t see their names.

It isn’t easy taking a Role-Playing game and turning it into a fully cooperative strategy card game; that being said, I couldn’t help but to compare the Pathfinder Adventure Card Game with similar fully-coop titles such as Mansions of Madness 2.0 or Gloomhaven, both who use lots of cards to achieve the full-on cooperative status. I still think that MoM 2.0 is yet to be dethroned in this category for me, since with the app integration the longest part of it’s setup is choosing your character. Instead of the app players in the Pathfinder game are setting up locations each encounter, which while random you’ll still know what’s likely to show up, you just don’t know when in the deck. You could do a lot worse for your time and money, but you might want to make sure this is an investment you plan on spending on, as it seems the Crimson Throne expansion is near-essential, and the room in the box suggests that many more are to come.

A review copy of the game and expansion were generously provided by Paizo.

If you can't find anyone to DM, and you really want to play Pathfinder, this game is a good choice. However, with the same amount of setup time and reading you could have someone in the DM chair, OR you could play a cooperative game like Mansions of Madness 2.0 or Gloomhaven and be playing quicker.