Ya gotta have faith 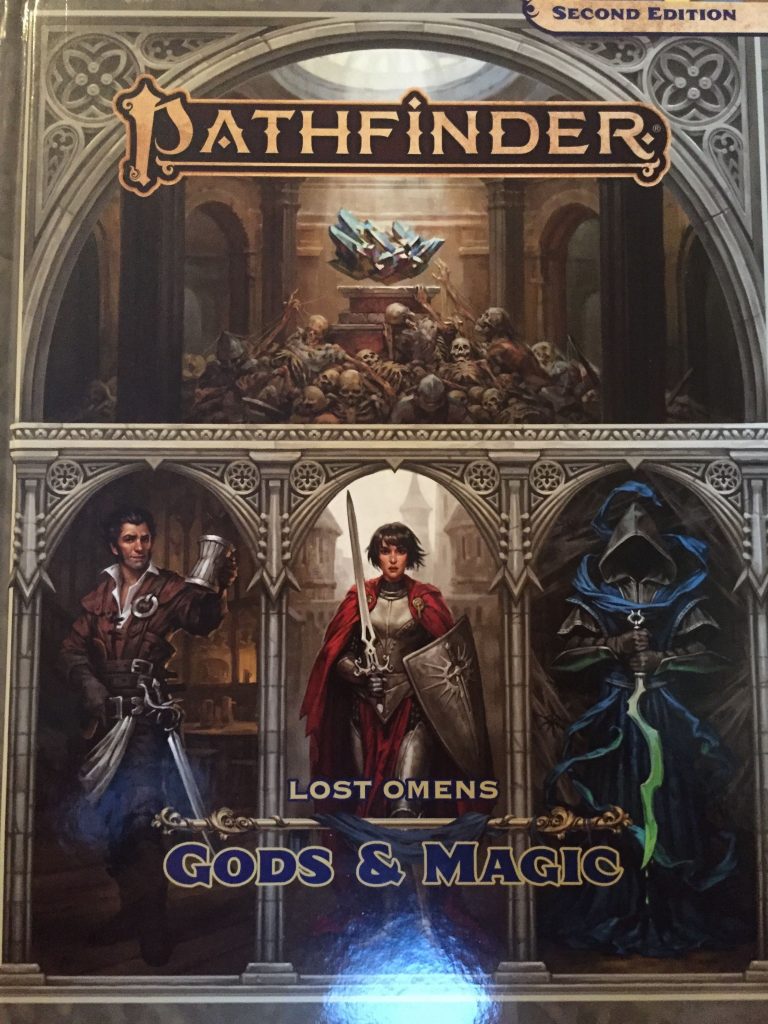 The Overview of Pathfinder Lost Omens: Gods & Magic posits that magic and faith are key components to a fantasy setting; without magic it’s just historical fiction, and without belief in something characters can lack motivation. In Pathfinder‘s world of Golarion, there exists many different gods who each have different abilities, boons, and motivations, but are also presented as basically equals. Personally I haven’t delved into belief much in any of my Pathfinder games, but I wanted to see what Paizo had to offer, so let’s dive in!

Many different fictional faiths and gods are depicted in this book. None are to be taken seriously outside of the game setting, but if your character praying to Nivi Rhombodazzle (page 67) is going to cause you to stumble, you should let this one pass you by.

Many of the Goddesses of the Inner Sea have chosen a specific tact to inspire some of their faithful, and have dressed in a specific way to reflect this. Modesty is only divine about half the time in Golarian.

Some of the Gods are clear analogs, such as Asmodeus for the Devil or Sarenrae for something close to Jesus. Lamashtu is a harpy with a three-eyed wolf’s head and skulls covering its privates. Urgathoa is goth lady from the chest up with a scythe covering her chest, and just a skeleton from the ribs down. Zon-Kuthon is Pinhead. A few of the gods are evil-looking bug extras from Starship Troopers. 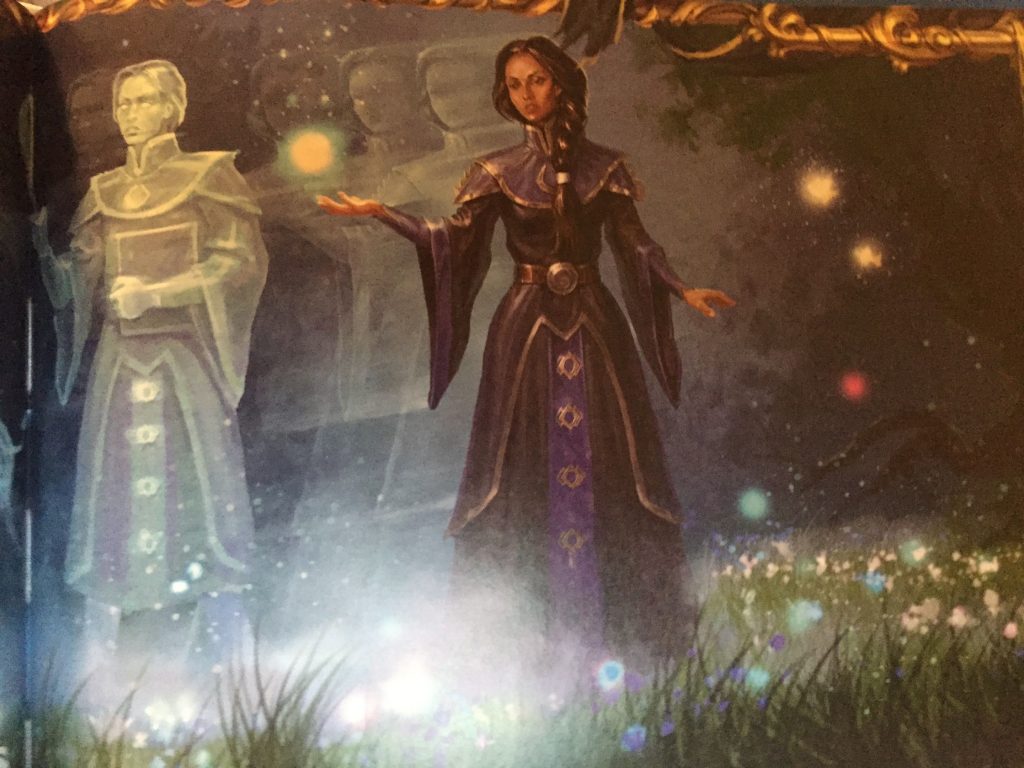 I’d never really considered a deep dive into Golarion’s different gods and religions, not that I was fundamentally opposed to it. If there was a cleric in the group I just let them do their thing, usually following one of the suggestions in the Core rulebook. Gods & Magic lets players take a closer look into the fantastical faith systems available in this fantasy setting, and supplies them with more than enough information to become an in-game follower.

It feels a lot like the Greek system of gods, where nobody is in charge over everything but each god has a small slice of the pie; Sarenrae is all about healing and redemption and light, while Gozreh is nature, sea, and the weather. Choices that you make regarding your character’s faith will give you a bevy of backstory options, as well as possible blessings, curses, spells, items, and dialog choices.

Each of the core deities has a two-page spread explaining almost everything you could hope to know including their alignment, realm, allies, enemies, relationships, temples, worshipers, sacred animal and colors, divine ability, and alternate domains. One of my favorite sections is in the sidebar, where it describes different aphorisms (phrases) which followers would use to get the attention of their preferred god. These can add a lot of flavor to a game and are a great help to Game Masters trying to speak with players or play as a specific follower.

After the core deities are other gods who are not necessarily lesser but only get one page, along with a full illustration. Some highlights here include Brigh, a clockwork pastor of invention that takes a female robotic form, the aforementioned Nivi Rhombodazzle whose portrait shows her with a red 6-sided die between each finger, and Grandmother Spider who totally looks and sounds like someone Spider-Man might worship, should he ever find himself in Pathfinder and needing a deity. Also there’s an evil version of Ego (Peter Quill’s dad) who looks like a skull-faced moon.

The next section concerns itself with demigods and other divinities, all who get just one paragraph and the occasional illustration. Also many of them sound like boss encounters from the Diablo series of video games. Belial, Mephistopheles, Baalzebul, Baphomet, and Zevgavizeb are just some of the hard-to-pronounce names in this section. Besides the Demon Lords, there are also the Eldest, Elemental Lords, Empyreal Lords, The Horsemen, Monitor demigods, and Outer Gods and Great Old Ones (also known as Lovecraftian gods). The options and dozens of different pantheons are truly mind-boggling; it made me wonder how long it took them to research and parse these different options out, and what kind of toll that took on them. In case you hadn’t noticed, many of the core gods and most of the demigods aren’t all that nice. But if you are making religion a core part of your game, 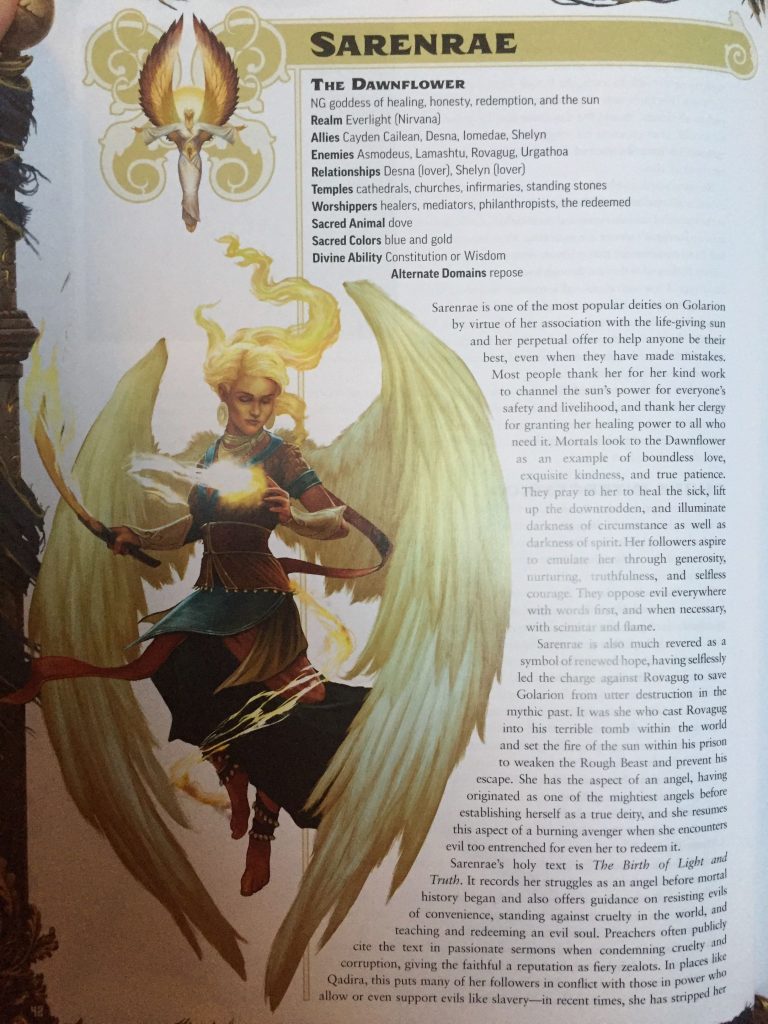 watch out for players being overwhelmed with all the choices. A good option would be to take what the players have already decided on and build from there. For instance, if their character is a dwarf, Torag is an easy suggestion, just like Iomedae is a good choice for a crusader or paladin. Another route players could take would be to follow a Pantheon or other Philosophy which doesn’t focus on a specific deity, such as the Green Faith which puts nature first. This is also the section of the book that mentions Atheists and Free agents (page 101).

Following that is the section on character options, containing feats, spells, items, and weapons. Some of the highlights from the feats include Battle Prayer, Numb to Death, and Sacred Defense. There is also an Evangelize feat, which I thought would make it so NPCs would become followers of your character’s faith – nope, it renders them stupefied for 1-2 rounds. I almost wanted to take offense for a moment but then I remembered it’s a game. The spells after the feats section seem pretty powerful, but some of them are quite specific in how they might be useful. Brand the Impenitent sounds cool, but I’m not sure how often you’d need to mark someone with, “an ethereal copy of your deity’s symbol…visible only to followers of your faith, who see it as clearly as a lit torch.” Other spells like Cup of Dust or Time Beacon sound cool, but again would have specific uses.

Domains are spells that are specific to a certain type, such as Cold, Lightning, Soul, or Time. The section on domains actually had some of the coolest sounding spells such as Ephemeral Hazards, Bottle the Storm, and Eject Soul. (Isn’t Eject Soul is what happened to Stephen Strange when he sassed the Ancient One and Bruce Banner?) Some of the domain spells still see curiously specific or lacking in common use, but the usefulness ratio is much better. For instance, there’s a Lament spell that’s literally just wailing your negative feelings out for 1d8 mental damage to enemies. Not sure how often I would even want to use that if I could. But the Wyrmkin domain spells are cool enough for me to mention both of them: Draconic Barrage lets you summon a random tiny dragon to shoot energy missiles at your foes, while Roar of the Wyrm is essentially Skyrim’s “Fus Ro Dah” shout but 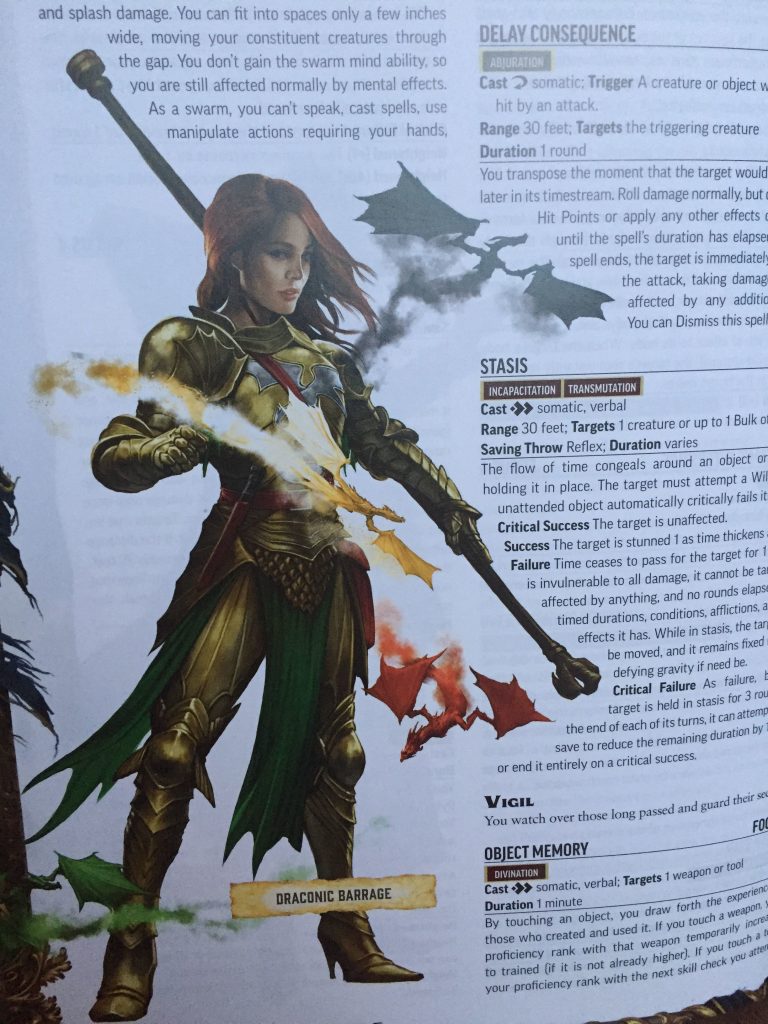 instead of pushing enemies it will frighten them.

The last section before the Appendix depicts favored weapons and specific magical items that followers can wield. My favorites here have to be Bottomless Stein, Necklace of Knives, and Mortar of Hidden Meaning – which lets you make tea with a hidden message for the drinker. Torag’s Silver Anvil takes the cake however, as it can be used as a forge or, “wielded as a +3 holy greater flaming greater striking silver meteor hammer.” Take that, Maxwell’s Silver Hammer. The Appendix is useful if you’re wanting to see a table of all the gods in the book, organized by type. Even in this compact form, it’s almost 10 pages long.

In the end, Gods and Magic is a great source if you’re looking to inject some religion into your Pathfinder game. But there’s a lot more gods than magic in this tome, which is a pity because the small section that is here was great, and I look forward to seeing more if they release a 2nd edition of Ultimate Magic or something like it. Your mileage may vary, but if you’re looking to add a little faith to your game, here’s your book.

In the end, Gods and Magic is a great source if you’re looking to inject some religion into your Pathfinder game. But there’s a lot more gods than magic in this tome, which is a pity because the small section that is here was great, and I look forward to seeing more if they release a 2nd edition of Ultimate Magic or something like it. Your mileage may vary, but if you’re looking to add a little faith to your game, here’s your book.