Paizo's back with a brand new edition... 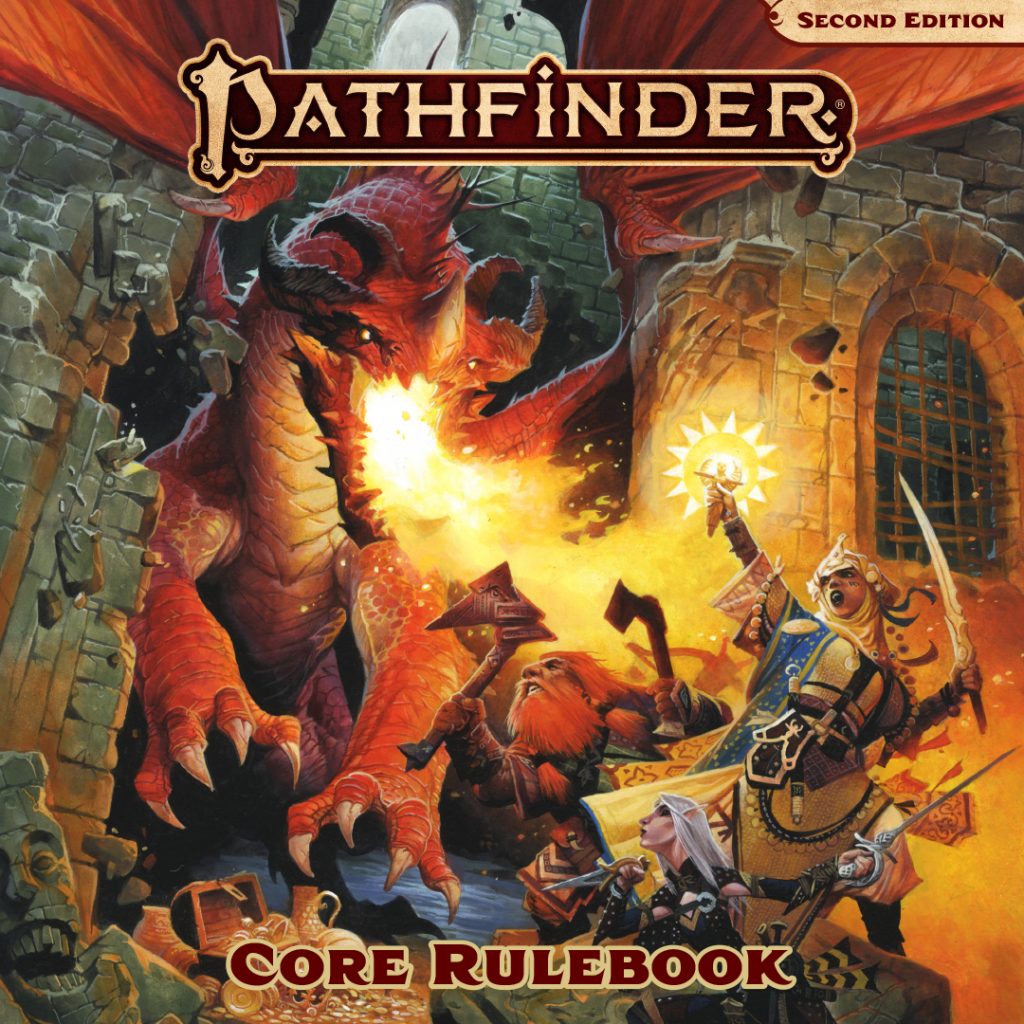 Players will usually have at least one encounter that cannot be resolved without weapons or magic or violence. Players will have the usual fantasy tropes of offensive weapons or magical items at their disposal depending on which class they choose and the Game Master’s  (GM) discretion.

Players may choose from several fantasy races and classes that employ magic to fight, defend, or meet whatever need presents itself. Depending on the module or GM, players may come into contact with demons, zombies, skeletons, or any number of evil cliches that exist in a fantasy or role-playing game.

So in 2009 Paizo published their own core rulebook for Pathfinder, thus blazing a trail as one of the more popular alternatives to the most popular tabletop role-playing game. Now, ten years later they’ve released a Second Edition, and it makes it even easier to jump in and enjoy a game of Pathfinder. 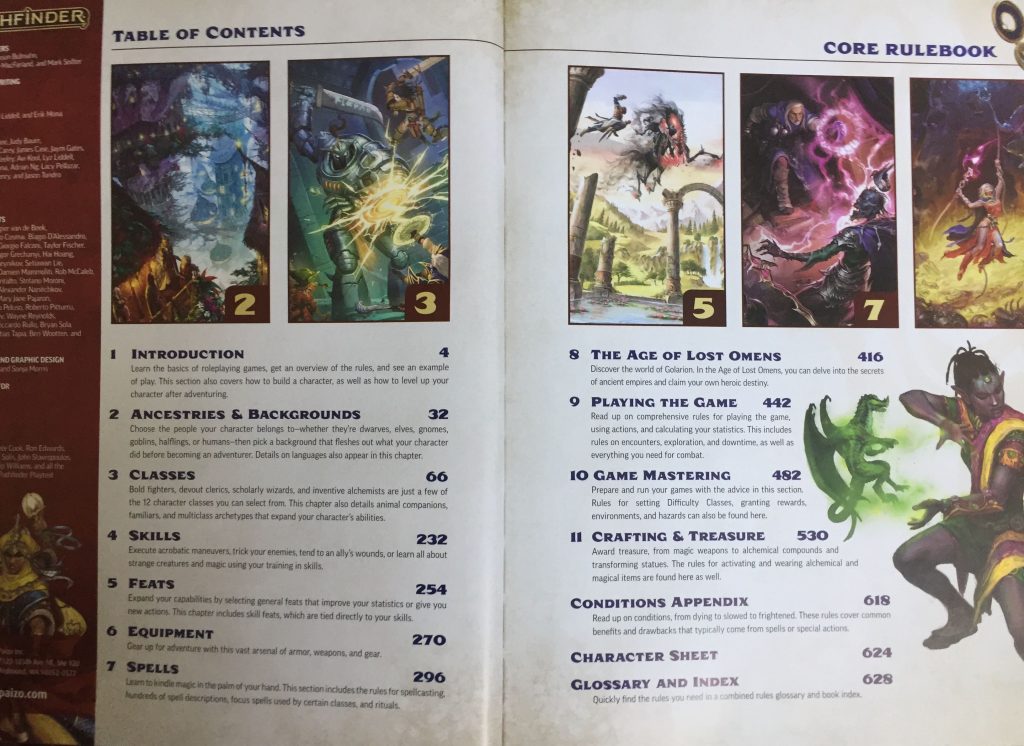 The biggest changes I found were with the character creation, critical hits and misses, and giving players more actions each turn. Choosing a class in the old core rulebook meant reading a quick blurb about the average expectation for that class, then reading long lists and tables about their skills, feats, and features. These tables and informative lists still exist, but each class has been given a full-page art and introductory section that explains their key abilities, as well as what they do in combat, social encounters, exploration, downtime, and a few other possibilities. This lets players learn as much as they can at a glance without having to drill down into the feats and nitty-gritty details yet. However once players decide on a class all that information is at your fingertips, should they want it. 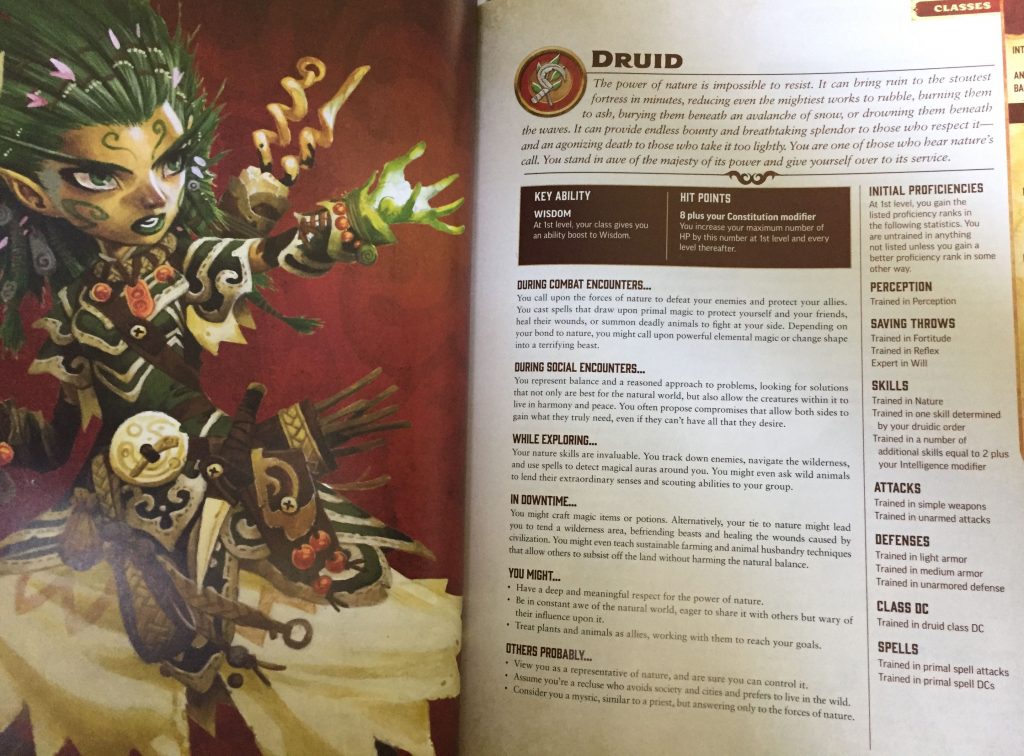 Also gone from the First Edition book are the Prestige Classes – special exceptional classes that players couldn’t usually choose from the start of a game without meeting several requirements first. Now each class in the Second Edition book has two or three suggestions of different focuses players can take their characters to make their class their own. For instance, if someone playing a Druid, he could be a Wild Druid, or a Storm Druid, or a Leaf Druid. If he doesn’t want his Wizard to be ordinary he could instead become a Conjurer or Illusionist.

Criticals are a little different in the Second Edition: if a player rolls and exceeds the check by more than 10, it’s considered a critical success (or a critical hit if it was an attack). On the flip side, if he fails by more than 10 it’s a critical failure. Rolling a 20 or a 1 on the die make it so the result is one degree better (or worse) than it would have been by numbers themselves. All of this is paraphrased from the rulebook, but what it’s trying to say is a natural 20 is still usually a critical success, and a 1 is still usually a critical failure. While I like that the designers are trying to make it easier for really cool stuff or interesting fumbles to happen, I’ll have to play with that rule a few times to see if I actually like it. 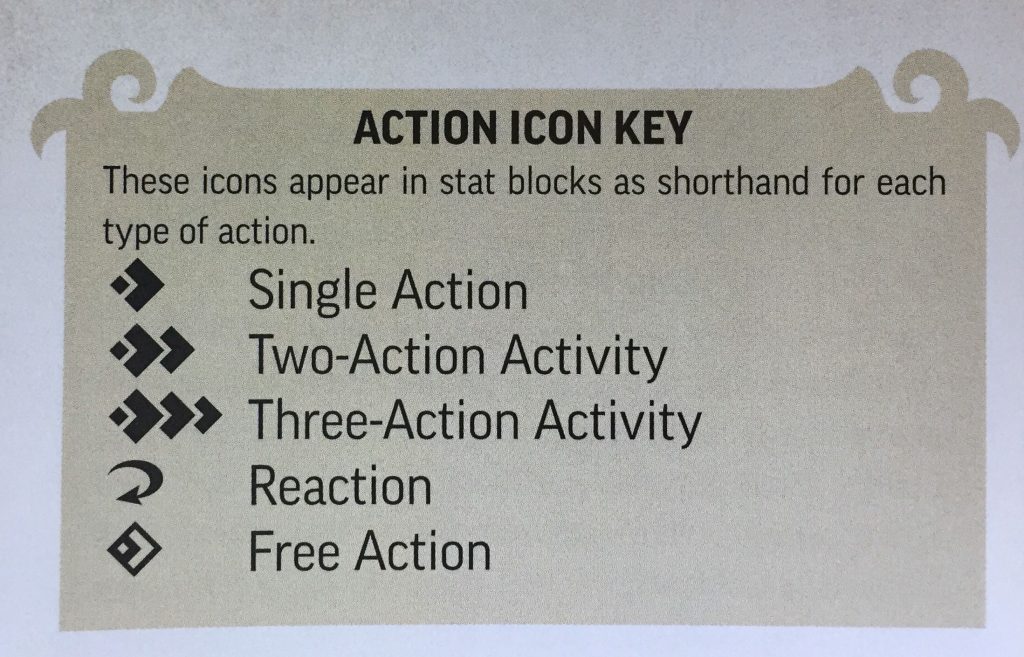 The change that I’m really uncertain about however, is the addition of extra actions each turn for players. Actions are now labeled as Single Action, Two-Action Activity, Three-Action Activity, Reaction, or Free Action. Each player is allowed 3 actions per turn, and most actions players will use take up one action. Some spells take two or three. I’m not sure how I feel about this re-tooling of the usual, “You can do a Move, a Major action, and a Minor action,” but I’m totally aware I just listed three things. As a player I think it sounds great but as a GM I worry about players abusing it to break encounters quickly. I think this too will require a bit of playing with to fully appreciate it.

The Bestiary Second Edition comes with over 350 pages of things for a group to encounter, fight, possibly even kill. According to the back of the book, it has, “Over 400 of fantasy’s fiercest foes…” and they range from the level one fodder such as rats or bears up to the Lovecraftian-inspired Shoggoth, with every kind of popular foe in-between. The best part (especially for GMs) are the glossaries in the back that explain abilities, list creatures by type or level, or even explain rituals some creatures can use. Almost every page has a full-color picture of a monster or enemy, and the artwork is great. Whether or not this book is a must-have purchase for you is entirely your call alone, whereas if you’re playing any role-playing game at least one person needs to buy the core book. 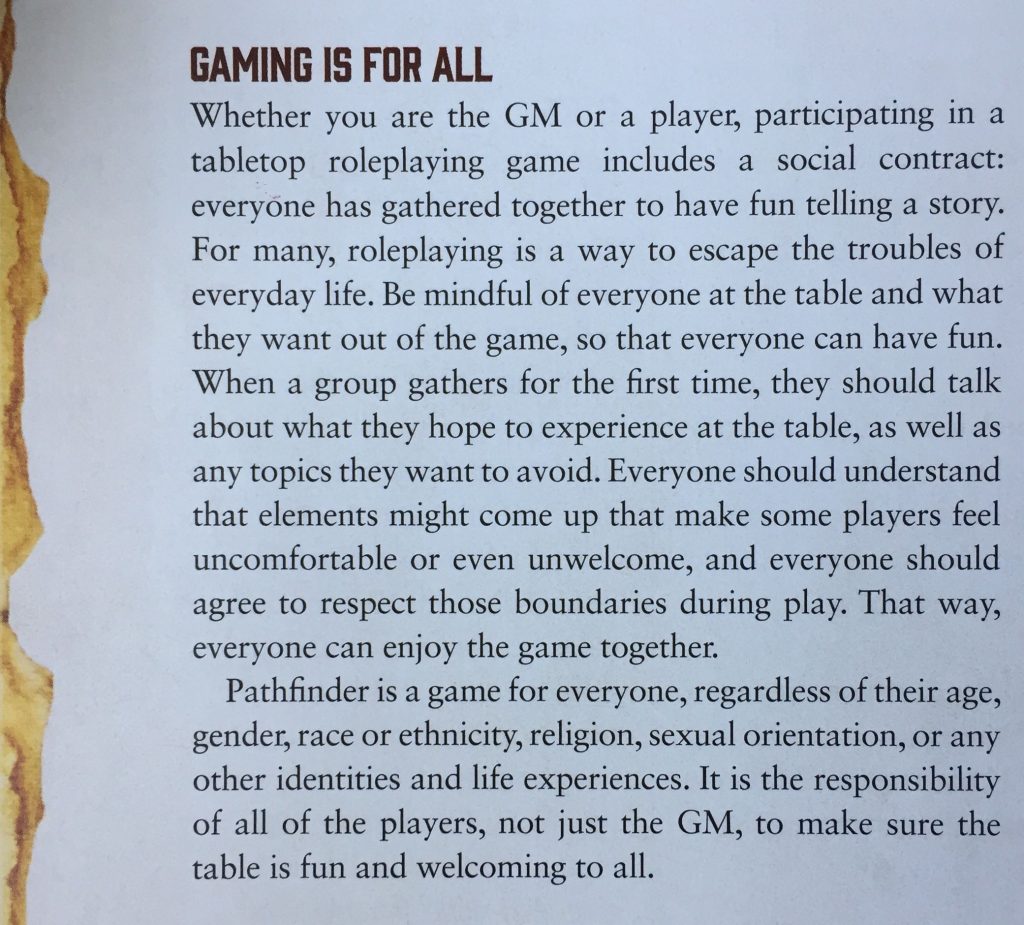 With any new edition comes new problems as well; if you want to play but aren’t sure about the new rules or certain monsters just keep in mind The First Rule, listed on page 7: “The first rule of Pathfinder is that this game is yours. Use it to tell the stories you want to tell, be the character you want to be, and share exciting adventures with friends. If any other rule gets in the way of your fun, as long as your group agrees, you can alter or ignore it to fit your story. The true goal of Pathfinder is for everyone to enjoy themselves.” I, for one, never bother handing out experience points when I run games – everyone just levels up at the end of each session (just ONE level, Jeremy).

If you’ve never gotten into a role-playing game, this edition is a great jumping-on point. I don’t know if I would suggest that someone who owns the First Edition book(s) needs to run out and buy this one, but if they did I doubt they’d be disappointed.

It's been 10 years since Paizo first published their very own core rulebook, and in that time D&D has gone through at least two different editions. If you're in the market for a new RPG, or just wanted to try out a new system that's just different enough from D&D, this Second Edition would make a fine addition to your gaming collection. But I'd be hard pressed to tell someone who already owned all the First Edition books to ditch them all and buy new ones, since it's more of a tune-up than a complete rebuilding of the game.