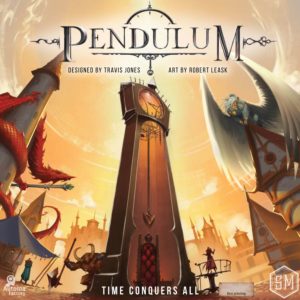 Pendulum is a new release from Stonemaier Games, the publisher of smash-hits like Scythe, Viticulture, and Wingspan. In what seems a drastic departure from their usual fare, Pendulum is a real-time game, in which there are no turns, but players instead take actions as quickly as they wish, while time ticks away. A mash-up of worker placement, one of the most beloved genres in the hobby, with real-time play, one of the most maligned? Let’s see how it works!

In Pendulum, players race to earn victory points, and I don’t mean that metaphorically. This is a real-time game without a traditional turn structure, so players are literally racing against time and each other.

The game is played on a central board, but each player also has a personal tableau where they track their resources, victory points, etc. 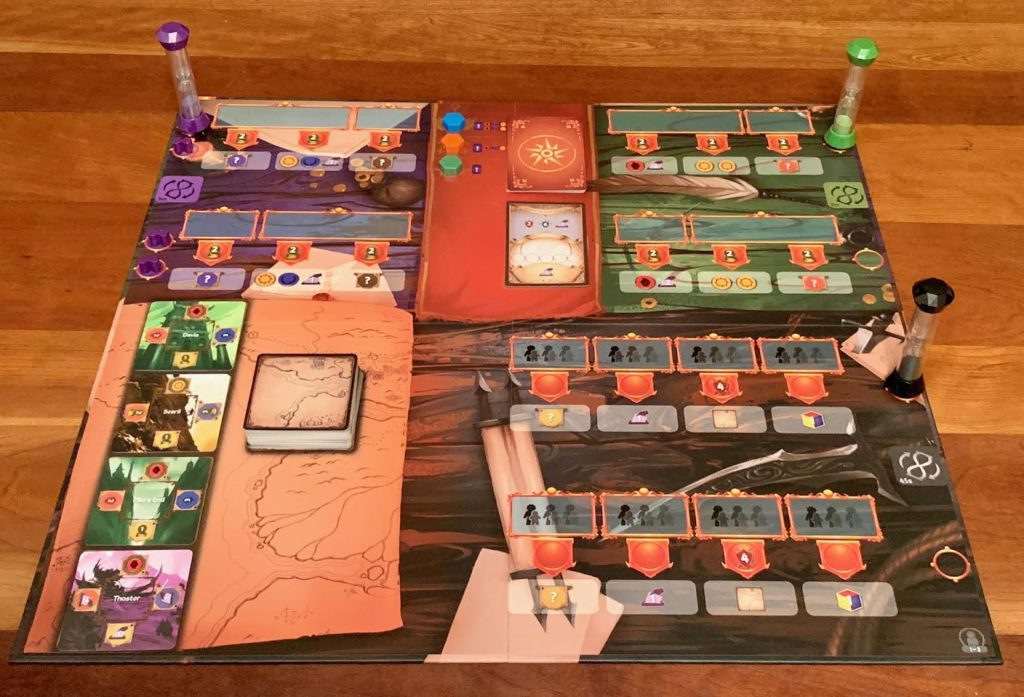 The central board, set up for a 3-player game.

The central board (shown above) is where the timers reside and where the workers are placed. The board is divided into 3 distinct sections, each with a timer of the corresponding color. At the start of the game, before the timers are flipped over, each player places 2 workers – a common and a grande worker – onto available spaces in the bottom row of a section. Much like Viticulture, common workers can be placed only on empty spaces, but grande workers may be placed anywhere, even on spots that are occupied.

The golden rule of Pendulum is that workers can be freely added or removed in rows that do NOT have timers in them, but actions are only resolved in rows that DO have timers in them. This may sound a bit confusing, but in essence, it just means that the timers determine which sets of actions can be resolved at any specific moment. As players move their workers around, they plan out their actions for the next time the timers are flipped. 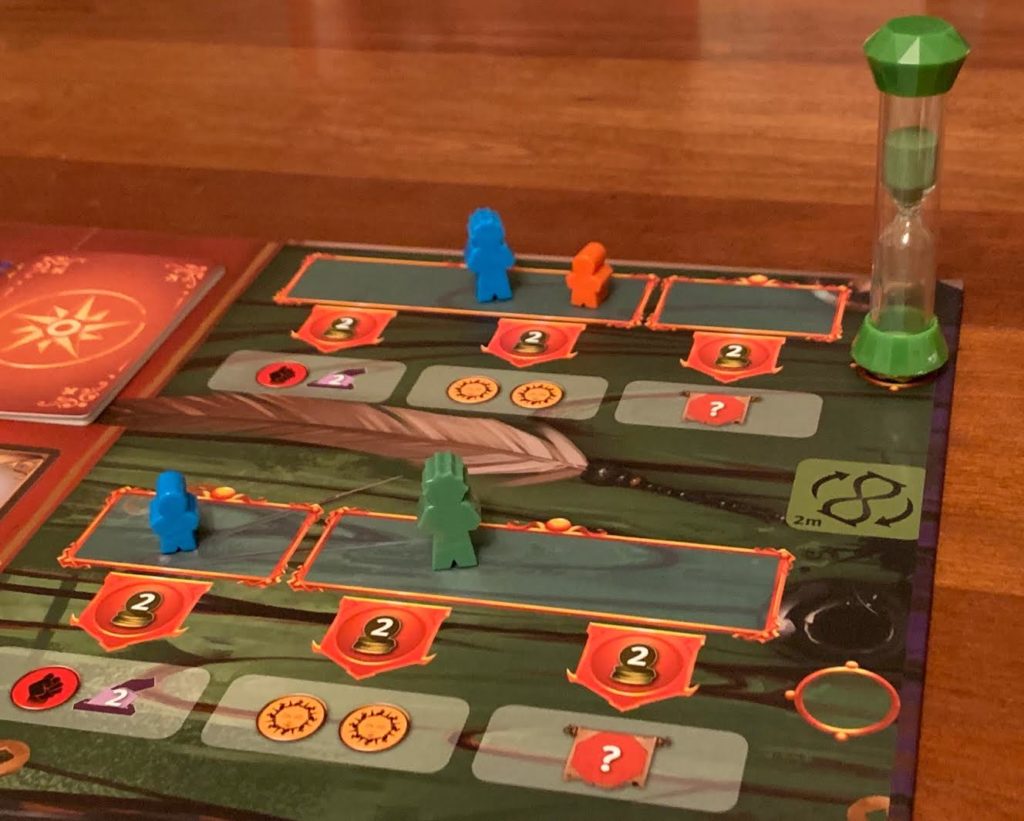 Each area of the board has top and bottom row actions, and when a timer gets flipped, it is moved from one place to the other (i.e. top to bottom or bottom to top). This usually frees up some workers and locks in others.

Board actions are structured as “pay x to get y,” and they usually relate to players’ individual tableaus. One action, for example, is “Pay 2 gold to earn 2 popularity points.” To execute this action, the player would spend 2 yellow cubes (gold) and move their marker up 2 spaces on their popularity track. 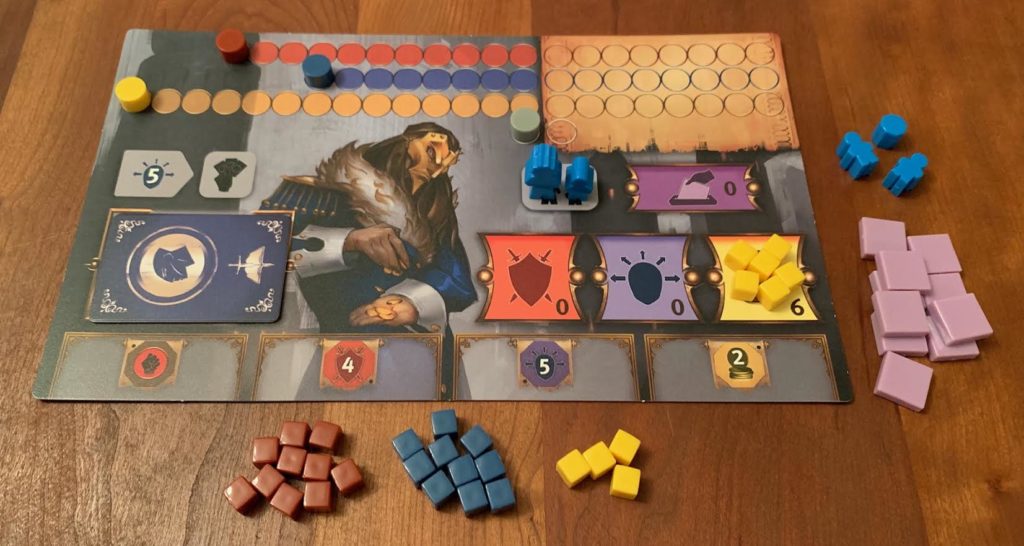 Rather than having a central “bank” of resources, each player has their own personal supply, which is kept next to their player mat. Everyone begins the game with a handful of their cubes available, but the rest of them must be earned from their supply before they can be spent.

Players also have a hand of cards that grant actions. These do not require workers to execute, but they can be used to do things like earn extra workers.

An example set of stratagem cards.

Basically, throughout the game, players act in real time, trying to think fast enough to outwit their opponents, but slowly enough to play strategically and really consider how their actions will work out.

At the end of each round is the Council phase, which is not resolved in real time (meaning players get a brief reprieve from the stress). During this phase, rewards are doled out based on how many votes (influence) players have.

A game of Pendulum lasts 4 rounds, each involving a prescribed series of timer flips. As players earn victory points, they move their markers up the tracks on their tableaus, and at the end of the 4th round, if a player has moved all their markers past the center threshold, that player wins. If multiple players accomplish this (or if no one does), there are a series of tie-breakers to help determine the winner.

(I should note that, for the sake of readability, I am glossing over a few aspects of the gameplay. For a more complete picture of how the game works, the rulebook can be viewed here.)

Pendulum is a very unexpected offering from Stonemaier Games. Its real-time nature makes it seem entirely different from than anything else in their catalog. Personally, I enjoy real-time games, but I know plenty of gamers who despise them entirely.

Of all the real-time games I have played, Pendulum is easily the most strategic. That said, it feels bizarre to blend a euro game – considered by many to be the purest, most cerebral style of game – with an artificial time limit, something often found in party or children’s games. This is not necessarily a bad thing, it’s just odd. Personally, though, I did not care for it.

Pendulum‘s production is okay, but it is not nearly as good as previous Stonemaier titles. The workers and cubes are cheap plastic, and they feel chintzy compared to the wooden eggs in Wingspan, the glass tokens in Viticulture, the buildings in Tapestry, or the detailed miniatures in Scythe. The overall aesthetic looks fairly bland, which is a shame considering the cool theme and cover art.

Since this game is played in real time, it is critically important for everyone to understand all the rules before getting started. Thankfully, there is a way to remove the real-time aspect so players can get comfortable with the game before being thrust into a time crunch, but when they do play in real time, there is little room to ask questions or get clarification about things. This can lead to accidental misplays and rule-breaking, which may go entirely unnoticed. (To be fair, I suppose this is the nature of real-time games, but most other ones out there are far simpler than this one, so they do not require as many clarifications.)

All told, Pendulum is a bold offering from Stonemaier Games – I can’t think of another game like it – but it is not for me. Personally, I’ll stick to Wingspan and Viticulture.

A review copy was provided by Stonemaier Games.

Pendulum is... odd. It combines completely disparate mechanisms, which in some cases can work well, but the end result here doesn't do it for me.