Review – Photosynthesis: Under the Moonlight

Under the Moonlight is the first expansion for the popular abstract game Photosynthesis, which we have reviewed before and featured in both our “Best Family Games of 2017” and “12 Games of Christmas 2017” lists. What happens in the forest after the sun goes down? Read on to find out.

When Photosynthesis came out a few years ago, I said it was one of the most beautiful games ever made, and I still stand by this claim. Gameplay-wise, it is pretty good, though my opinion of it has waned slightly over time. I always find it enjoyable, but the more I play it, the more I think the ratio of point token values is not balanced/scaled as well as it should be. That said, it’s still a game I like playing from time to time. 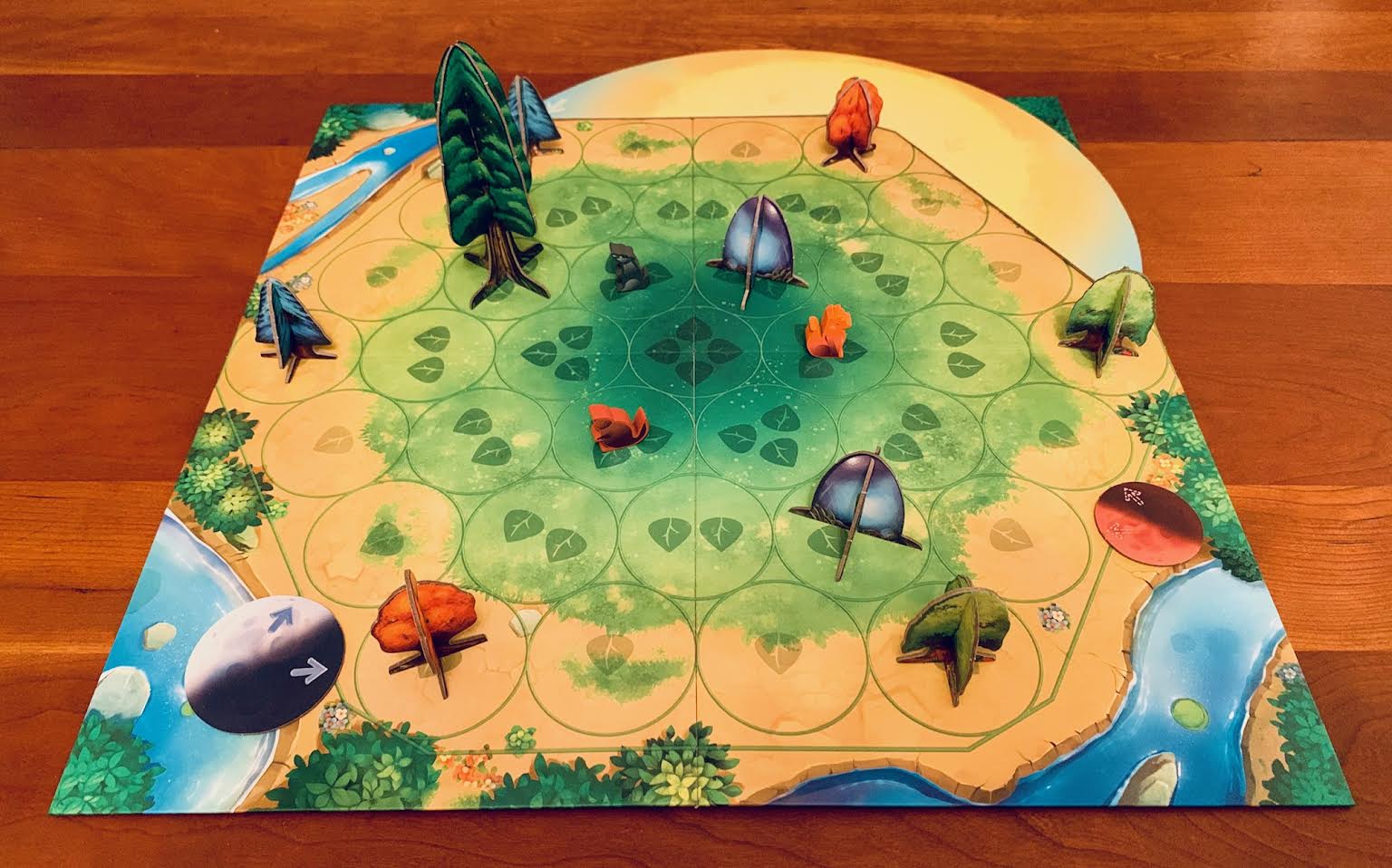 The game board, with some of the new content included.

Photosynthesis: Under the Moonlight adds new content to the game in the form of 3 play modules that can be mixed and matched. Rounds are played in largely the same way as before, but with several additions. Below are some brief descriptions of the different modules:

The Moon and Forest Animals Mode

This module uses a moon token in addition to the normal sun marker. Any time the sun moves, the moon moves too, in the opposite direction. A smaller phase token tracks the moon’s phases and indicates where it will go next; each round, the moon moves 5 spaces around the outside of the board. Anytime the moon and sun cross paths, the phase marker is flipped over, alternating between a half moon and a full moon.

Each player also has a secondary board in their tableau, with a unique forest animal on it. At the start of the game, a matching animal meeple is placed on a 3-leaf space. Then, each round, players collect lunar points from their animals, in addition to their normal light points.

Any forest animal in the moonlight’s path receives 1 or 2 lunar points for a half or full moon, respectively. However, unlike the sun, which shines on the entire board, the moonlight only shines down two lines of spaces. Trees do not block moonlight, with the exception of the Great Elder Tree, which I will discuss shortly.

Animals can move about the board, even entering spaces with regular trees. As they collect lunar points, they can spend them use their special actions. This is what makes animals particularly interesting: each one has a unique ability that provides new strategic options. Some examples of animal powers are listed below:

There are 8 animals to choose from, so there is quite of lot of variety to be found in this module.

The Great Elder Tree is the only tree piece that comes in this expansion, but its name is well-deserved. It is taller than any tree from the base game, which makes it look really cool on the board. Because of its massive height, the Elder Tree casts shadows not just on 1, 2, or 3 spaces, but along its entire line of spaces opposite the sun or moon. (Again, normally, trees do not block moonlight, but the Elder Tree is the exception to this rule.) 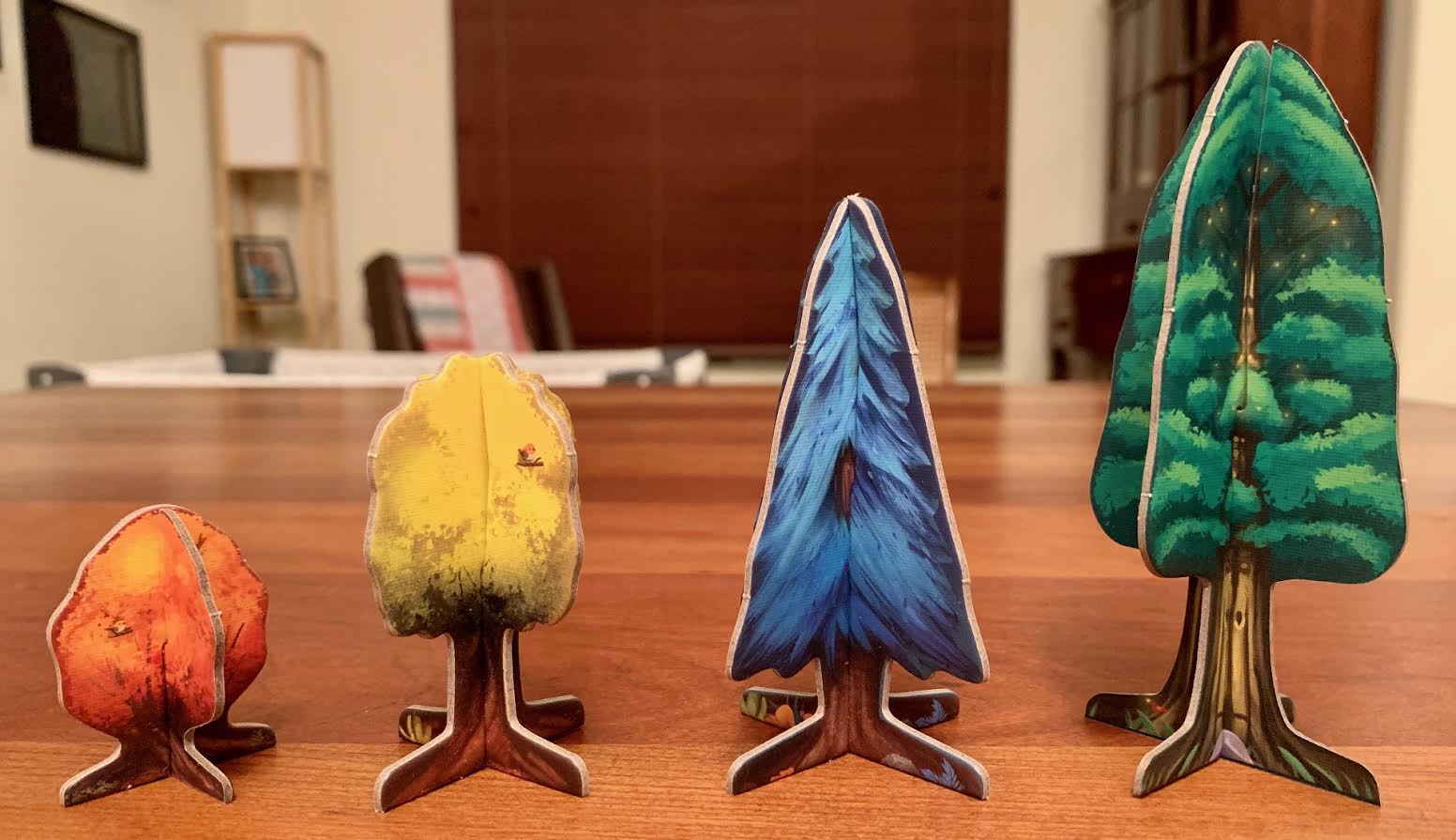 The Elder Tree is a big boy.

When playing with this module, a number of moonstone pieces are placed onto the board during setup. These act like small trees, in the sense that they cast a small shadow and have an area of influence that extends one space.

If the moonlight hits a moonstone, the stone illuminates and shines light into all adjacent spaces. Any animals in these spaces collect moonlight as normal. The stones also act as obstacles, meaning a tree cannot be planted in a space with one. Thus, in addition to their regular in-game function of providing lunar points, they also make the board a bit tighter for players.

As I said at the beginning of this review, I still enjoy Photosynthesis and play it occasionally, but not as much as I did when it first came out. I am pleased to say that Under the Moonlight adds some new ideas to the game that help to revitalize it.

By itself, the base game of Photosynthesis is completely symmetrical, meaning that all players play the exact same way with the exact same tools. There is nothing wrong with this at all, but over time, games like this can start to feel “same-y.” The animals in Under the Moonlight introduce variable powers into the game, which gives it meaningful asymmetry. In addition to the regular decisions from the base game, players now have to consider things like how to best position the animals to earn lunar points, and how to use their powers most effectively.

The Moon and Forest Animals module is, unsurprisingly, the most substantive addition this expansion offers. (The other 2 feel more supplemental.) To that end, the new content does make the game more complex, so interested parties should be aware that it increases the barrier to entry. I would strongly advise folks who have never played Photosynthesis to start with the base game before adding in the expansion materials. Experienced players, on the other hand, should not have much trouble incorporating them.

Under the Moonlight adds new levels of strategy to Photosynthesis and makes it even more visually stunning. The new content comes at the cost of added complexity, but altogether it deepens the experience. Folks who enjoy the base game but want more from it should definitely check it out.

Under the Moonlight adds new levels of strategy to Photosynthesis and makes it even more visually stunning. The new content comes at the cost of added complexity, but altogether it deepens the experience. Folks who enjoy the base game but want more from it should definitely check it out.