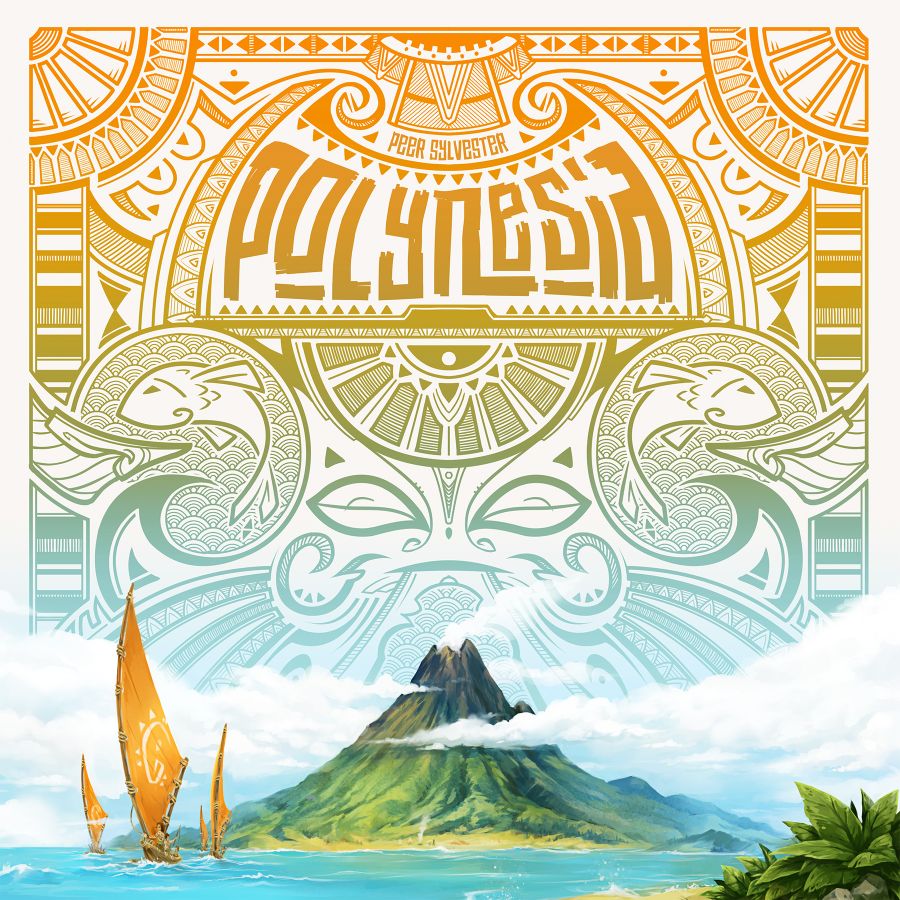 Polynesia is a new game of route-building and resource collection. From popular designer Peer Sylvester (The Lost Expedition, Merv: Heart of the Silk Road), this game has a system in which the cost/strength of actions changes throughout each round. With a light ruleset and a playtime of about 45 minutes, it falls into the gateway-plus category.

In Polynesia, 2-4 players set out to sea to escape an impending volcanic eruption. Throughout the game, they chart course to neighboring islands and move their tribe members to safety.

The game is played on a central board representing an interconnected island chain. 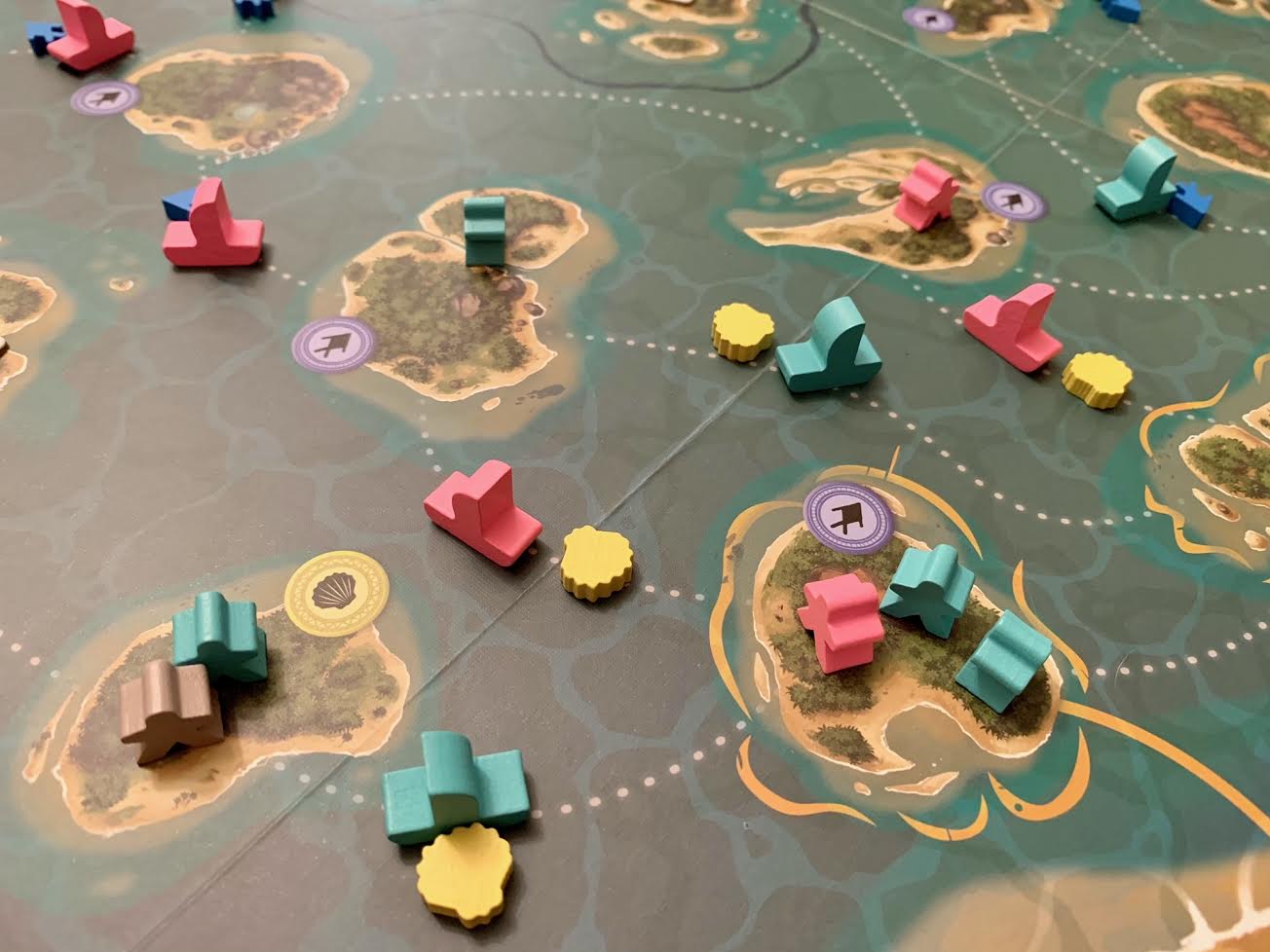 The goal of the game is to earn the most points. Primarily, points come from occupying certain islands and moving meeples onto the board. At the end of the game, each player earns the number of points shown in the left-most available space on their tableau; that is, the left-most spot without a meeple on it. 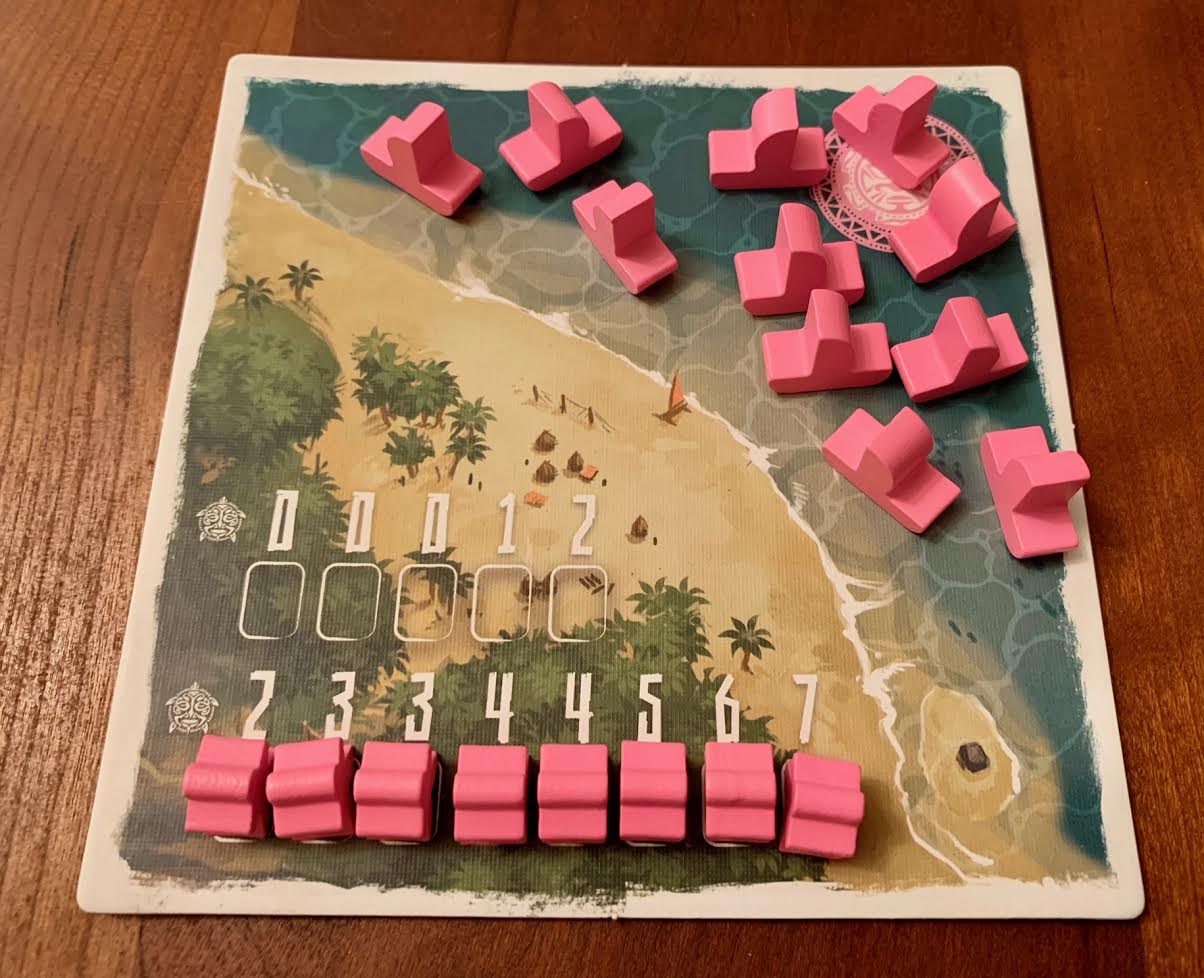 If a player managed to place all their meeples, for example, they would earn 7 points.

Each round, players take turns executing 1 action until all players have executed 3 actions; a phase tracker is used to guide the turn sequence. The available actions are:

Moving meeples and claiming routes are the most common actions. During each action round, the cost/strength of the actions changes. When players take their first action, everything involves the number 3: gain 3 resources when gathering, move 3 times when moving, spend 3 resources when claiming a new route. Then during the second round, the actions are based on the number 2 – move twice, gain 2 resources, etc. – then the number 1. This means that moving and gaining resources are more effective early in the turn, and claiming new routes is more effective later on.

Meeples can move along routes of their own color at no cost, but if they wish to use an opponent’s route, the opponent must have a meeple present there to act as a “guide.” Additionally, the active player must pay the opponent for use of the route. When claiming a route, if an opposing player already has a boat there, the active player pays the opponent directly, rather than returning resources to the supply. Thus, it is good to claim routes as early as possible.

After players have completed their actions each round, a colored cube is drawn randomly from a bag. This acts as the game timer. The bag includes 6 red cubes, 3 gray cubes, and 1 black cube. When the 6th and final red cube is drawn, the volcano erupts and the game ends. Gray cubes have no effect, and the black cube requires players to draw 2 more cubes immediately. This means the game will last between 5 and 10 rounds. After the final red cube is drawn, points are calculated and the player with the highest score wins!

When I first heard about Polynesia, I was excited to try it. It looked like just the kind of game I enjoy: light on rules, fast-moving, and fun. Sadly though, when I got it to the table, it fell totally flat.

The notion of actions with a changing cost/effectiveness sounds really clever, and I can envision it working well, but in this game, I just didn’t find it interesting. The decisions always felt obvious, and that made the overall experience seem bland. On top of this, the indeterminate game length can be an issue. The game may last as little as 5 rounds – not enough time for gameplay to feel meaningful – or it could last a full 10 rounds, by which time players are bored because of the same-y decisions.

Perhaps the greatest problems lie with the physical components. For starters, the fish and shell resources are teeny-tiny, so small they are difficult to even pick up. Second, and more importantly, the board becomes very “busy” right away and only gets increasingly difficult to read as time goes on. By the end of the game, turns will drag, not because players are overwhelmed with tough decisions, but simply because they have to look so carefully at the board-state.

All told, Polynesia was a big miss for me. It has some unique ideas with real potential, but in practice it just wasn’t engaging. Bogged down by shallow gameplay and preventable component issues, I give this one a “try before you buy.”

Polynesia has some unique ideas with real potential, but in practice it just falls flat. Bogged down by shallow gameplay and preventable component issues, this one gets a "try before you buy."