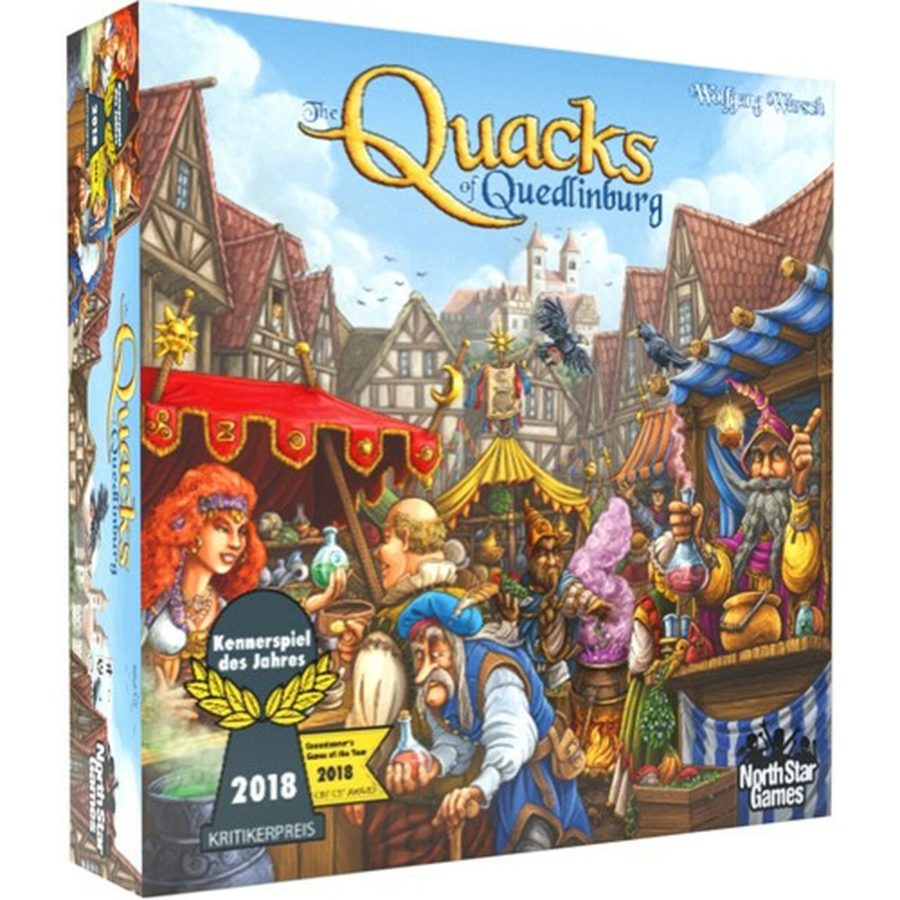 Winner of the 2018 Kennerspiel des Jahres (connoisseur/expert game of the year award), Quacks of Quedlinburg quickly became an “evergreen” title at my local game store. Quacks is definitely on the lighter side of Kennerspiel winners, and I would categorize it more as a family game than an intense board-gamer-only game. Now, you might be asking, how can all those small components really make up a family-friendly, teachable-to-grandma game? Read on to find out!

In Quacks, players represent charlatan doctors mixing ingredients into their pots. Players simultaneously draw cardboard chits representing ingredients out of their ingredient bags and place them on their cauldron board in counterclockwise fashion, starting from the middle. The more ingredients a player places, the further around their pot they will go, and the more victory points and money they will collect. If a player draws more than 7 total points of cherry bombs (white chips), their pot explodes and they are not allowed to partake in beneficial round-end bonuses. 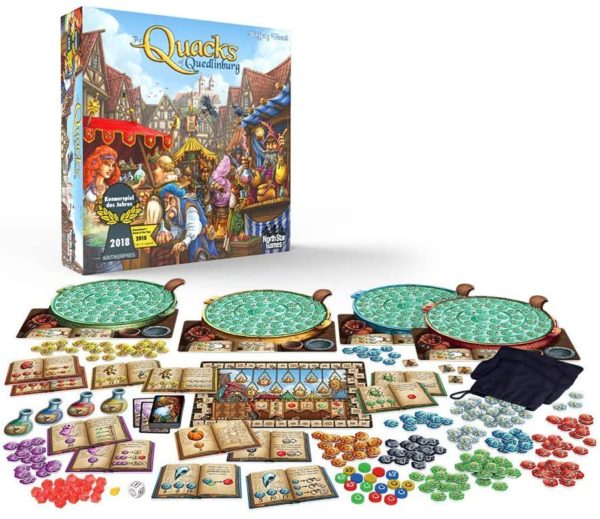 The game consists of 9 rounds. Each round, players draw ingredient chips out of their bags and stop whenever they decide to or are forced to because of going over 7 cherry bombs. Afterward, players score victory points, collect rubies, and spend money according to bonuses in the game. Then, on to the next round! The bonuses are clear to understand and there are helpful reminders on the gameboard for how they all work.

At the end of each round, players will use the money they’ve earned from placing ingredients to purchase up to 2 new ingredients for their bag (Quacks focuses on bag-building as opposed to deck-building like Dominion or Star Realms). By the end of the 3rd round there are 7 ingredients for players to choose from, and it’s quite enjoyable to customize the ingredients in your bag and experiment with different combinations to see which ones work best together. 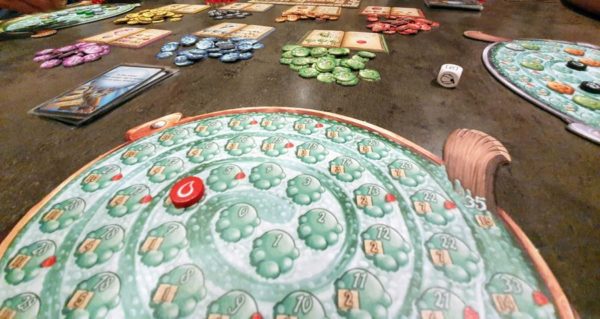 The meat of the game lies in buying ingredient chips and deciding when to stop pulling them from your bag. After buying ingredients, it’s satisfying to see them work together and it’s a welcome surprise when ingredients combo in ways you hadn’t predicted! As far as pulling ingredients out of the bag, I’ve played this game dozens of times and I still feel the tension between stopping before I blow my pot up and doing probability calculations in my head about what ingredients I have left in my bag and deciding to push my luck for one more victory point or a bit of extra spending money.

There’s also great fun to be had in watching other people pull good and bad ingredients out of their bags. Observing the drama of other player’s pots is entertaining, and often, how well opponents are doing affects players’ decision-making. However, when some players get behind, Quacks has a wonderful catch-up mechanism that’s perfect for a game with so much luck and exploding pots: rat tails.

Rat tails allow every player who is not currently winning to get a bonus based on the number of rat tails on the scoreboard between them and the leader. Some games are tight, and even the player in last place may only get a 3-space bump, but I’ve also played games where last place gets a 10-space bump and is able to catch back up. While the rat tail mechanism encourages risk-taking, most games are won by the slow and steady player whose pot doesn’t blow up much and whose ingredients were thoughtfully collected to complement each other. 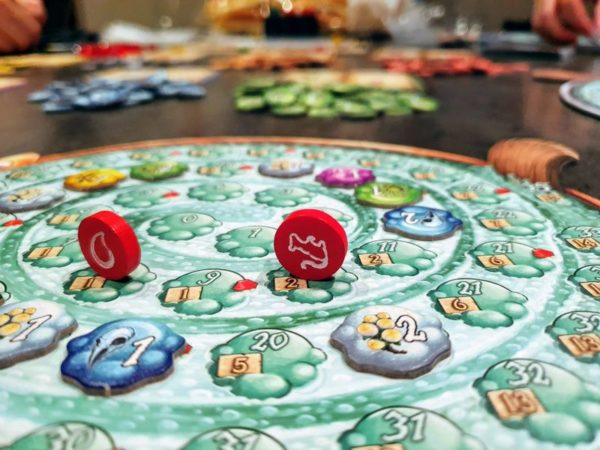 Note how the rat tail allows the red player to start placing ingredients 2 spaces farther ahead in his pot.

Quacks is highly replayable for its bag-building mechanic, but its replayability is enhanced by the books that define what each ingredient does. Some ingredients (like the pumpkins) work the exact same way every game, but some ingredients change depending on what side of the book is chosen during setup. There are 5 ingredients with 4 options and 2 other ingredient books so there are tons of possible combinations.

After dozens of games, I have only found a few downsides to Quacks. The artwork is quirky and thematic and the components are either quality colored wood or thick cardboard, so nothing to critique there; however, after a few dozen plays, some of our cardboard ingredient chits are beginning to peel. I am considering buying plastic ingredient chits that would be more durable and more fun to pull out of the bags, but I’m not sure they’re worth the $40 or so it would take.

A few other nitpicks are that Quacks looks a bit intimidating and isn’t as easy to set up as I would like it to be. It’s not a behemoth by any means, but it takes time to get all the cardboard ingredient chits out and the tokens for everyone’s player board. Lastly, Quacks is only 4 players. You can increase that player count to 5 with an expansion, but a game with simultaneous play in the vein of Sushi Go! and 7 Wonders would probably not suffer much by adding more players.

But these are minor issues. There’s not many other games like Quacks out there, so while it’s not a traditional gateway game in the way that learning Sushi Go! will help you learn 7 Wonders, we still bust it out with our non-gamer friends simply because it’s a joy to play. Quacks is not going to teach a ton of transferable mechanics, but it will infect players with the joy of playing board games (hopefully).

Quacks is an excellent game and one that will continue to see a lot of table time at my family gatherings. There is certainly an element of luck in this game, but there’s also many elements of planning, risk-assessment, and downright fun times pulling ingredients out of a bag. If it sounds intriguing to you, pick it up. It has won a major award, after all.

Quacks is an excellent game and one that will continue to see a lot of table time at my family gatherings. If it sounds intriguing to you, pick it up.

I'm a teacher, writer, and board game reviewer. I especially love board games that pull me in like a good book. My wife is my favorite gaming partner.