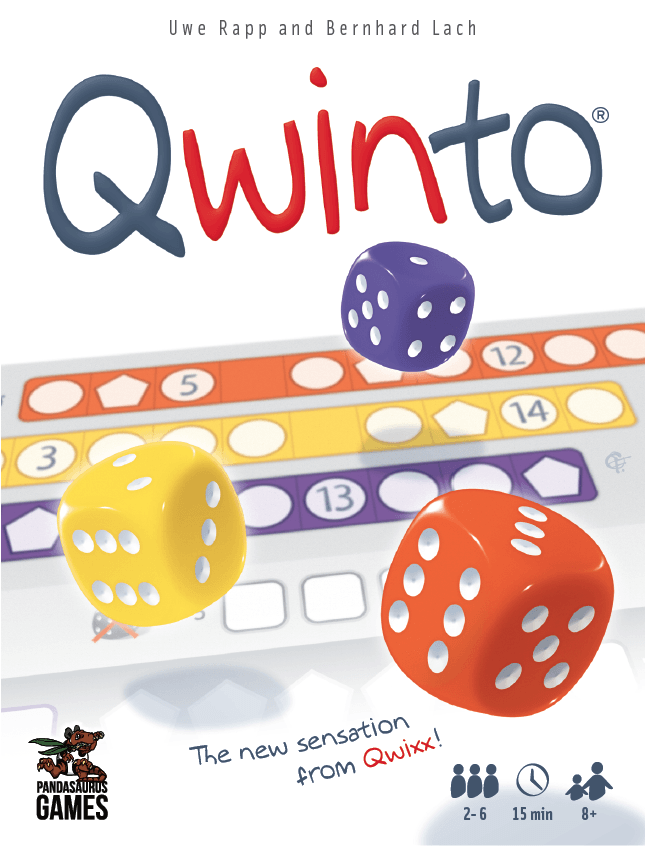 Qwinto is a roll-and-write game in which everyone plays each turn. In this game, players earn points by filling out rows and columns, but as things progress, players’ options get tighter and tighter. They need to be strategic about how and where they place their numbers, balancing planning ahead with maximizing points.

Qwinto is the follow-up to the popular dice game Qwixx. In this game, players take turns rolling 1-3 dice and noting the results on their sheets. As with Qwixx, Qwinto has all players acting every turn, so there is next to no downtime.

To begin the game, everyone receives a player sheet and pencil, and the first player takes the 3 dice.

As is the case with most roll-and-writes, Qwinto has very few components. Just a few dice and some pencils and paper!

Each turn, the active player can roll any combination of dice they wish. They are allowed a single reroll, but if they decide to use it, they must reroll all the dice they used; they can’t pick and choose.

Whatever the final result of their roll, all players can then write this number on their sheets. The rules for adding numbers are: 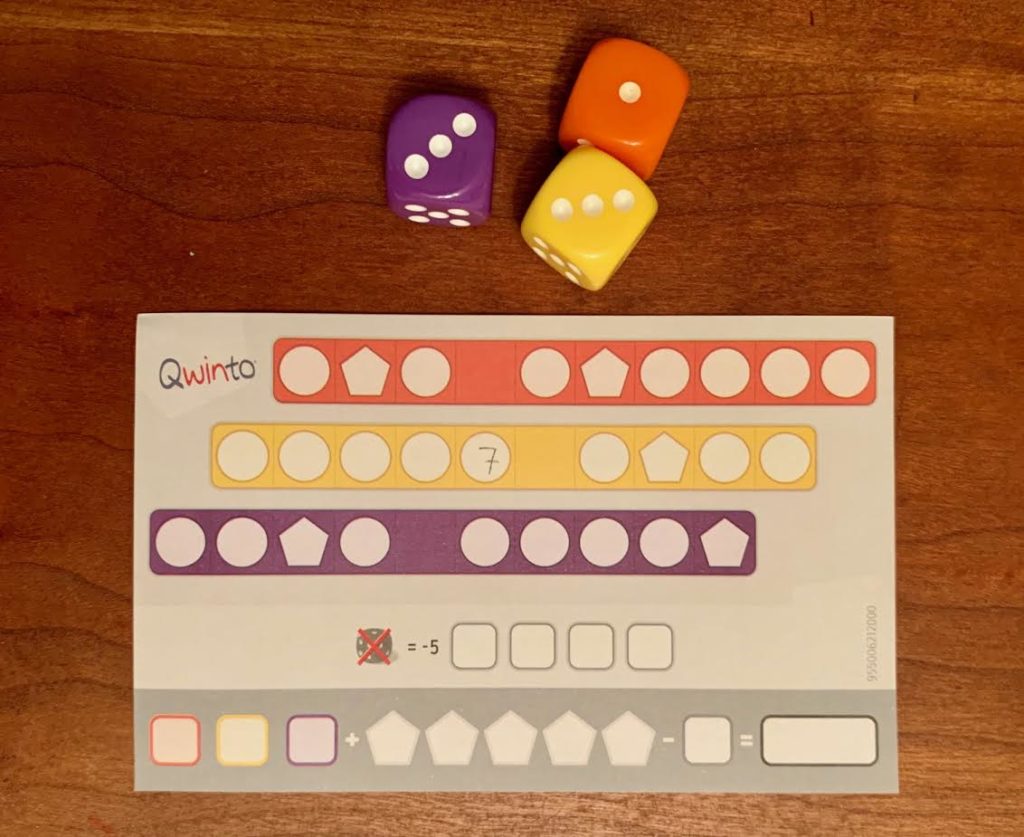 Suppose the first roll is a 7, as shown above. Each player can write a 7 anywhere on their sheet, as long as it follows the placement rules described. 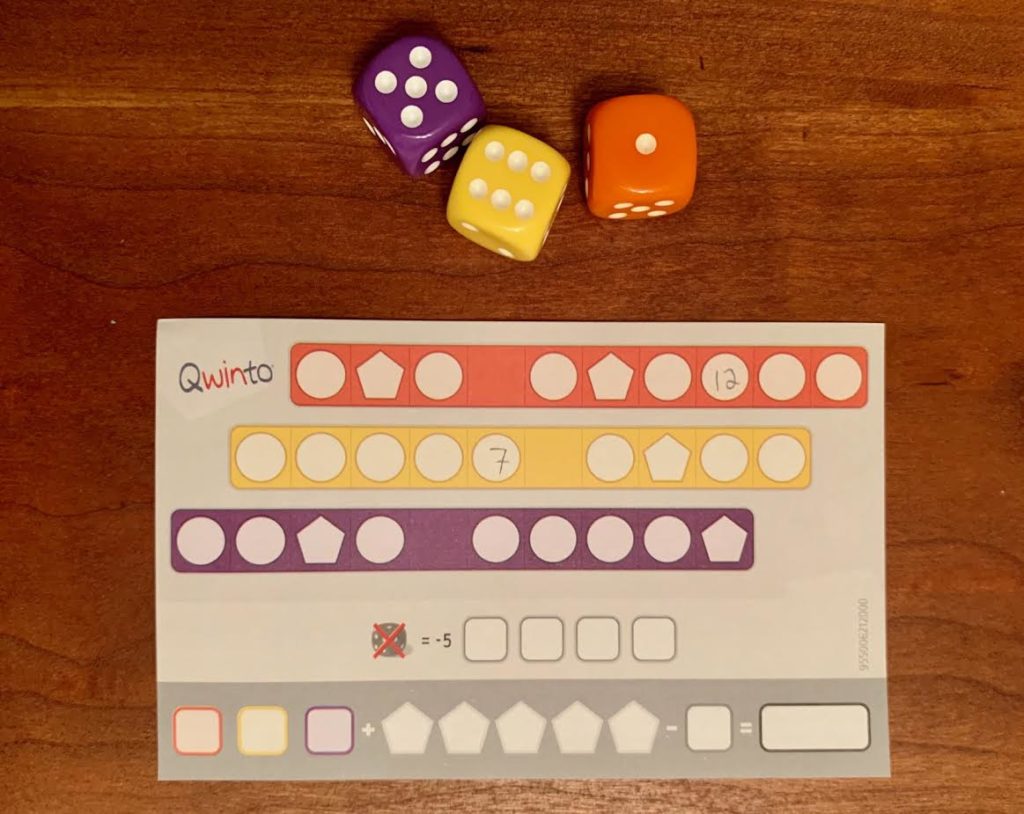 Then, suppose the next roll is a 12. This allows everyone to add a 12 to their sheets, and so on and so on.

Play continues like this, with players rolling and writing until 1 of 2 things happens:

A miss happens when the active player cannot or does not wish to use the result of their roll. (The other players can still use it, though!) At the end of the game, each miss on a player’s sheet is -5 points.

When either endgame condition is triggered, players add up their scores. In each of the 3 rows, if a player completed the row, they score the rightmost number in it. Otherwise, if the player did not complete the row, each space they filled in is worth 1 point.

Then, in each column of 3 spaces, if a player filled out all 3, they score the number in the pentagonal space. Lastly, players subtract points for their misses. Whoever has the most points wins! 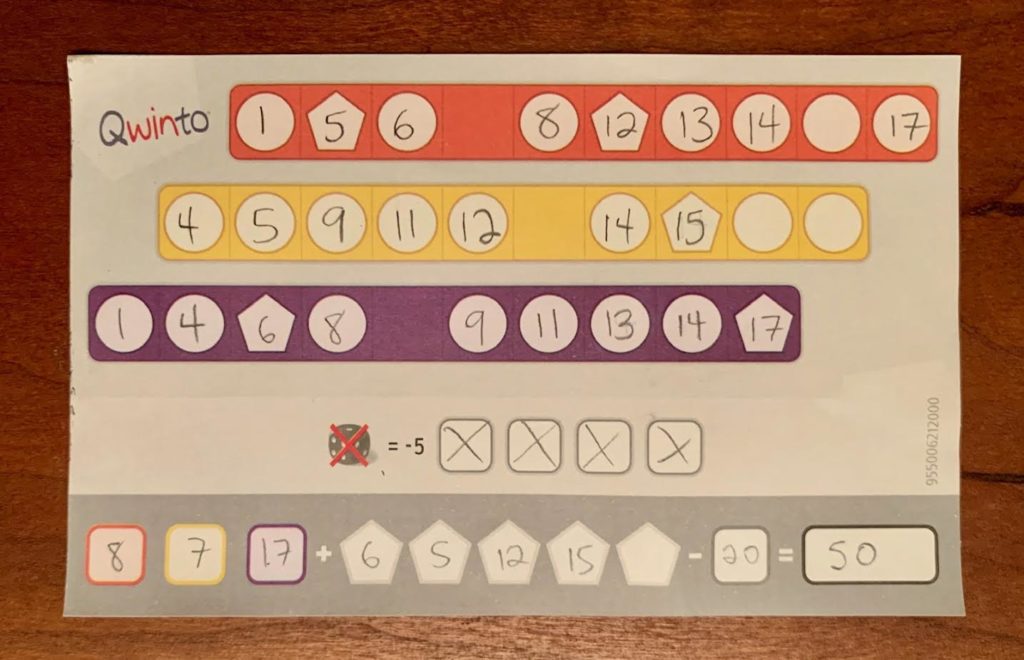 A sheet from one of my recent games. (Mistakes were made.)

Qwinto is a faithful follow-up to Qwixx, similar enough to make it feel familiar, but different enough that it stands on its own.

In Qwixx, it can be strategic to forego using a dice roll, especially if using it would mean skipping over a bunch of numbers. In Qwinto, however, since the spaces can be filled out in any order, there is usually little incentive to sit out on a roll.

Qwinto also offers an interesting decision about which dice to use each turn, and it encourages players to keep an eye on their opponents’ sheets. A situation can arise where one player needs, say, low numbers in orange, and all their opponents have already filled up the left sides of their orange rows. In this case, the player can comfortably roll just the orange die, confident that it will help them and not their opponents! It is not a mean game by any stretch, but Qwinto has some strategic nuances that differ from its predecessor.

The scoring in this game can seem a bit confusing at first, but players should quickly get the hang of it. One minor gripe about the game’s production is that the sheets are not double-sided. I know that making them double-sided would have increased production cost, but it would have doubled the mileage players get out of the game. Not a huge deal, but something to be aware of.

Overall, Qwinto is an enjoyable roll-and-write, and a solid follow-up to Qwixx. Fans of the genre should check it out.

Qwinto is a faithful follow-up to Qwixx, similar enough to make it feel familiar, but different enough that it stands on its own.