The expansions for Raiders of the North Sea introduce some very interesting elements to an already great game. Without adding deadweight to the game system, they enhance the experience by offering new strategic opportunities.

True to viking mythos, these expansions feature themes of drinking mead and slaughtering enemies. They don’t contain graphic imagery – it is mostly just subtextual – but the theme is something to be aware of.

“Why didn’t I think of that? How have I never seen that before?”

Those were my immediate reactions to hearing about the worker placement system in Raiders of the North Sea. I’ve played many games in the worker placement genre before, but none has ever offered as brilliantly elegant a twist as this one’s “place one, take one” system.

One of our other reviewers covered Raiders of the North Sea in the past, so for this review, I am going to focus on its two expansions, Fields of Fame and Hall of Heroes. Up first…

Enemy jarls have joined forces to combat your raids! Fields of Fame adds new challenges, but also new chances to make history. This expansion contains a supplemental board with an additional area to plunder and a new type of characteristic: fame. 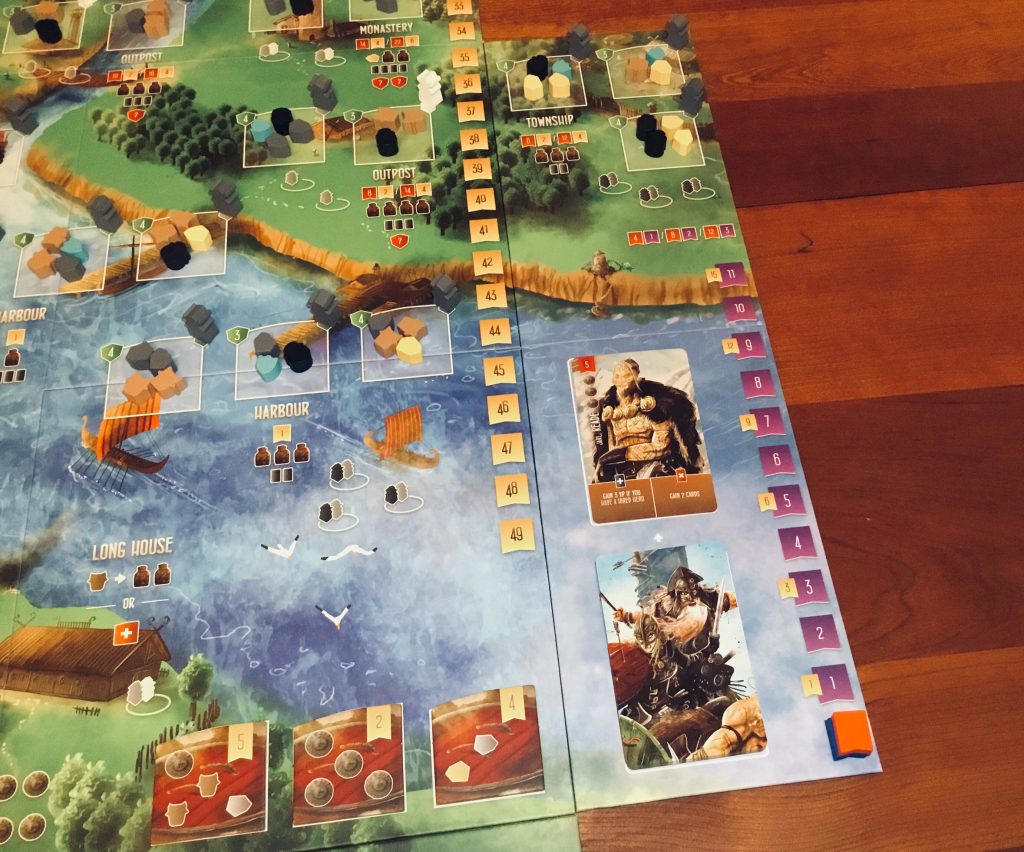 Included in the box are a dozen jarl tokens. When seeding the board during setup, these are tossed into the bag along with the normal plunder and valkyrie tokens. Whenever a player picks up a jarl token in a raid, he/she draws a card from the jarl deck.

Jarls are big, beefy fighters, so taking them on is no easy task. Thus, when encountering one, a player can choose to kill the jarl, subdue him, or flee. Each choice has its pros and cons.

Killing and subduing will always result in the active player’s crew receiving wounds. Fields of Fame comes with a bunch of Wound markers, and each time a crew member receives one, it reduces his/her military strength going forward. 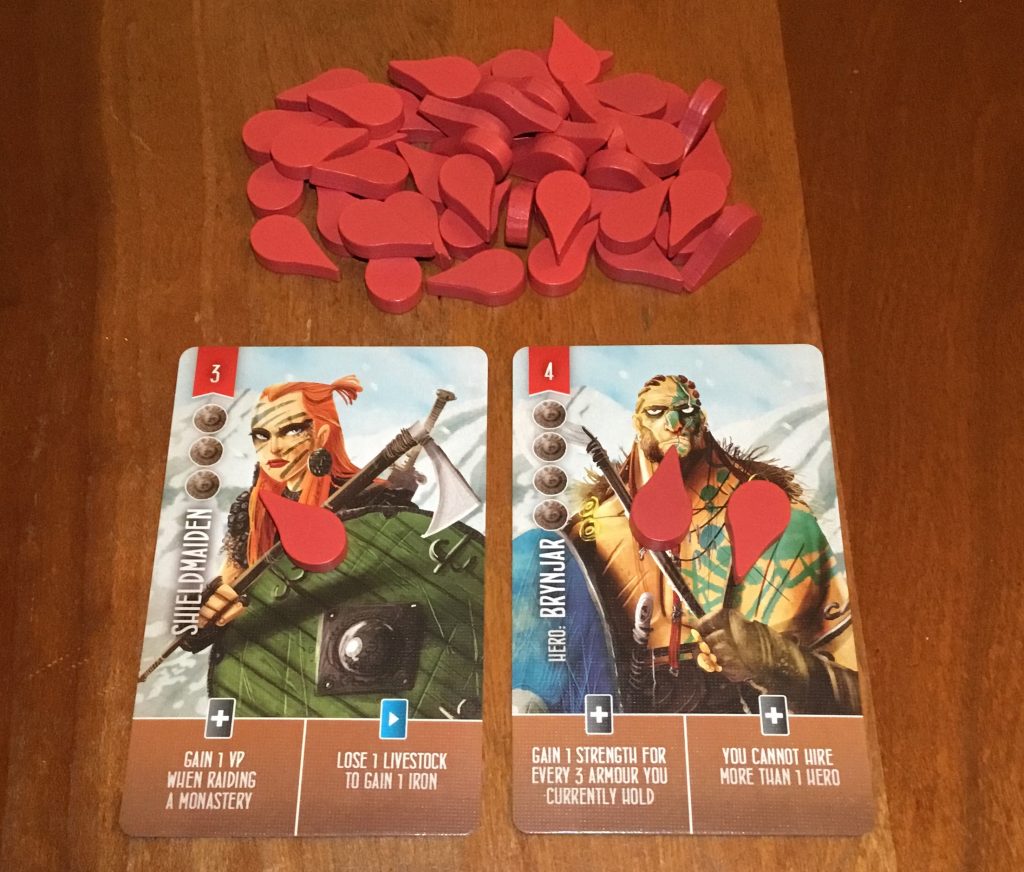 If a player kills a jarl, he/she earns two fame, along with the bonus shown on the jarl’s card. If the player instead chooses to subdue him, the jarl can be hired and added to the player’s crew. In both cases, the crew will take damage, but killing a jarl deals more damage than subduing him.

If a player encounters a jarl and either cannot or does not wish to fight him, he/she can run away instead. Naturally, though, doing so loses the player a fame or victory point, and invites endless ridicule from other players.

Fields of Fame also includes optional “valkyrie dice”. These provide a play variant in which a “2” result adds an extra valkyrie to the reward of a raid. They don’t change the gameplay all that much, but they look amazingly sleek. 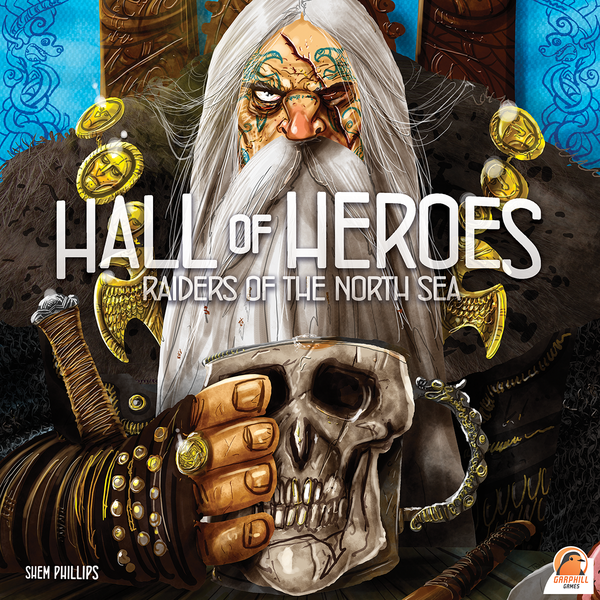 After a long day of raiding, vikings like to unwind with a pint or two. This expansion introduces another supplemental board, the Mead Hall, where the grog and good times flow freely. In this location, players have two new options for Work actions: Charm the Crowd and Complete a Quest. (Both options use the same space.)

Charming the crowd provides a new way for players to acquire cards. At all times, three cards are face-up on a track next to the Mead Hall, and for an action, a player can add one to his/her hand. Now, receiving only one card seems suboptimal when a player can draw two at the Gate House, but there are two advantages to using the Mead Hall:

The purpose of the mead resource is to provide extra, one-time-use military strength during a raid. Before a player rolls dice for a raid, he/she can assign any number of mead to the crew, up to the maximum eight. Each mead used grants an extra point of strength, and is then discarded.

The other action, Complete a Quest, gives raid spaces another use after they have been plundered. Hall of Heroes includes a number of Quest tiles, each of which shows a required military strength, a type of quest, and a reward for its completion.

When a space gets emptied from a raid, a random Quest tile is placed on top of it. Later on, a player at the Mead Hall can spend the required amount of military strength to claim the tile and its reward. The interesting thing about this, though, is that the military strength must come from cards still in the player’s hand, that is, cards that have not yet been used. 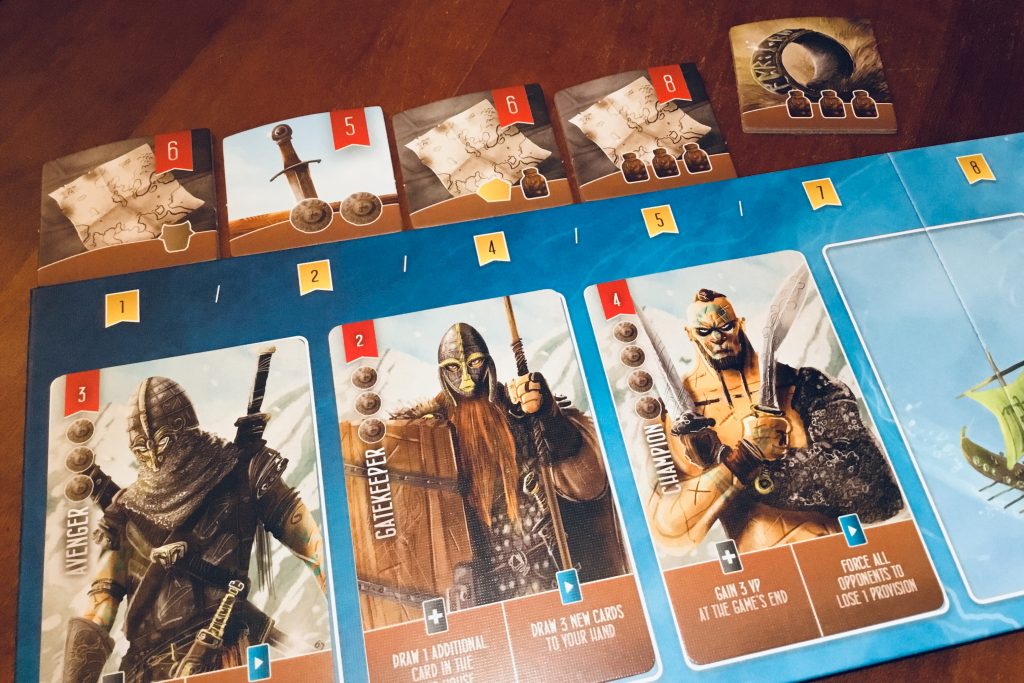 Each player also has a personal tableau board, atop which completed quests are placed. The more quests a player fulfills, the more points he/she will earn at the end of the game. Additionally, if a player completes three quests of the same kind (i.e. three quests with the same image on the tiles), he/she can earn a Reputation tile, which grants a cool bonus and boosts game-end points.

I really enjoy Raiders of the North Sea by itself, but these expansions elevate the experience to the next level. All too often, expansions seem to bog games down by adding unnecessary dead-weight, but that is not the case here. Fields of Fame and Hall of Heroes do exactly what expansions should do: give players more of a good thing.

Mechanically, they don’t add much complexity to the game, but they deepen the strategy significantly. The symbology in both expansions is perfectly attuned to that of the original game, meaning experienced players will have no problem adding them in. Everything should feel intuitive right out of the gate.

Hall of Heroes powers up the players with tankards of liquid courage, and Fields of Fame increases the game’s overall challenge. As a result, they work well together, maxing out the game system – the challenges get harder, but the players get stronger. Because they complement each other, I really recommend checking out both sets. However, if you can only get one, I would give a slight edge to Hall of Heroes, simply for its humorous thematic overtones.

Raiders of the North Sea is very good by itself, but these expansions make it excellent.

A review copy of Raiders of the North Sea (base game) was provided by Renegade Game Studios.

These expansions are great. Highly recommended for fans of the base game.