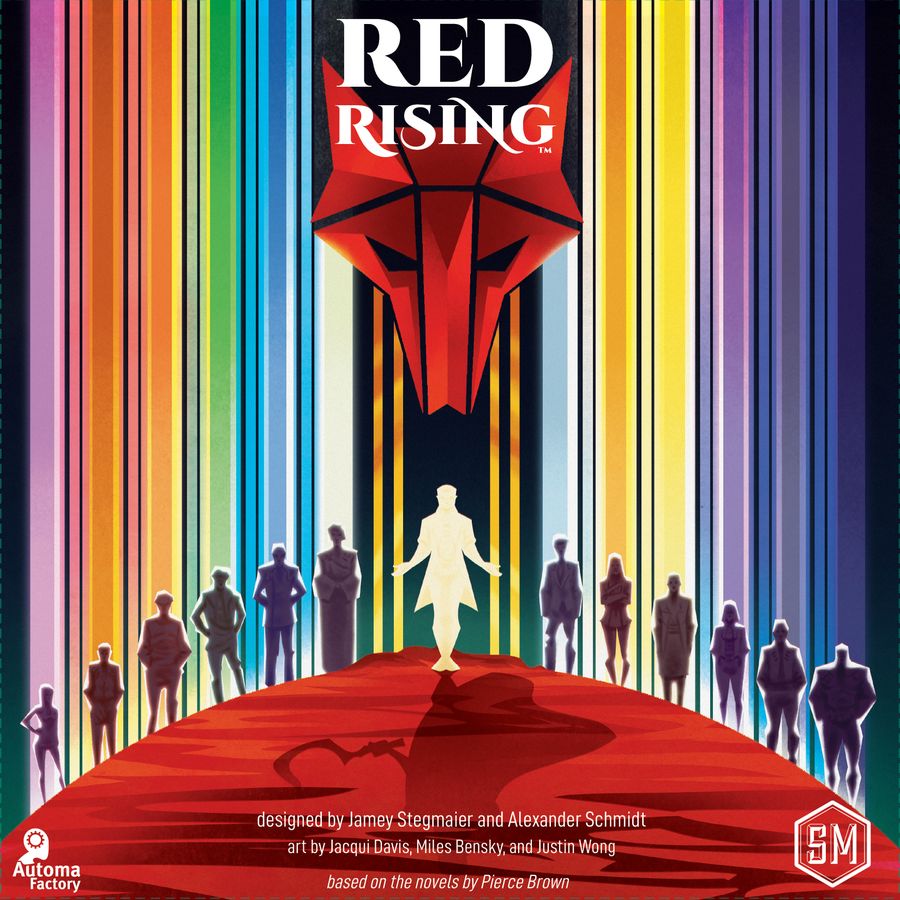 Red Rising is a card-driven game based on Pierce Brown’s book series of the same name. In this game, 1-6 players manage hands of cards featuring characters from the novels. They take turns playing cards onto a common tableau and choosing other cards to take in exchange, activating abilities in the process. Though quite simple mechanistically, this game offers a surprising amount of decision-making.

[NOTE: This review covers the Collector’s Edition of Red Rising. This version of the game features component upgrades not found in the retail edition, including metal cubes, gold-foiled cards, and card stands. It should be noted that both versions of the game play exactly the same, and the differences are purely cosmetic.]

I always get excited when Stonemaier Games announces a new release, and Red Rising was no exception. In this hand management game, players play, draw, and exchange cards in hopes of accomplishing objectives and maximizing end-game points.

In Red Rising, each player keeps an individual hand of cards but plays them onto a shared tableau. This central board features 4 locations, each with a column for cards and each offering a unique bonus. 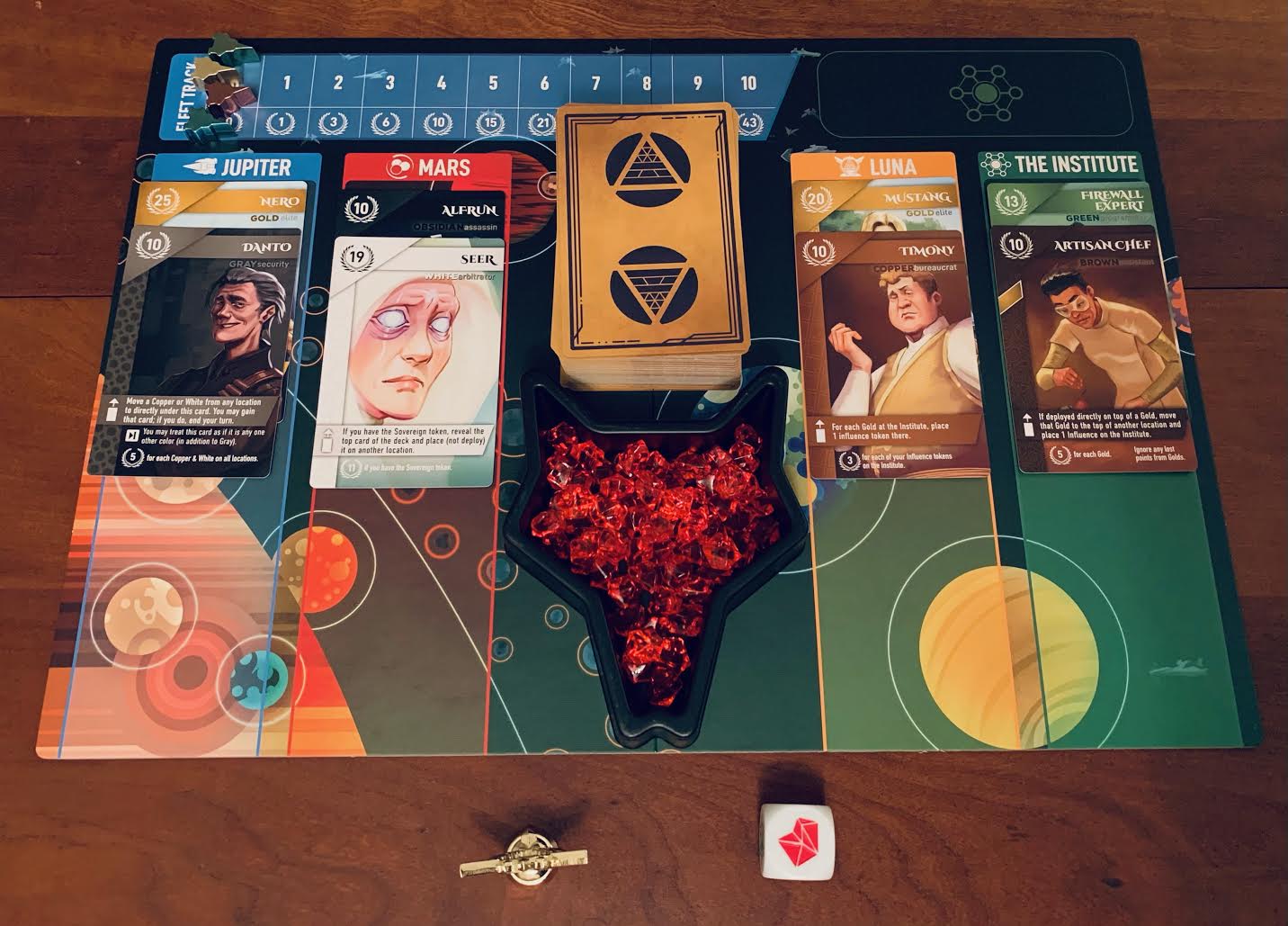 The overall goal of the game is to earn the most points. Points can come from the 3 in-game objectives – collecting helium tokens, advancing on the fleet track, and having the most influence at “The Institute” – but the bulk of players’ points come from the cards remaining in their hands at game end.

Each card has an ability, a base point value, and a bonus point value if certain criteria are met. Most card abilities are resolved when the card is played onto the board; playing cards is the primary turn action. On a player’s turn, they perform either a Lead or a Scout action: 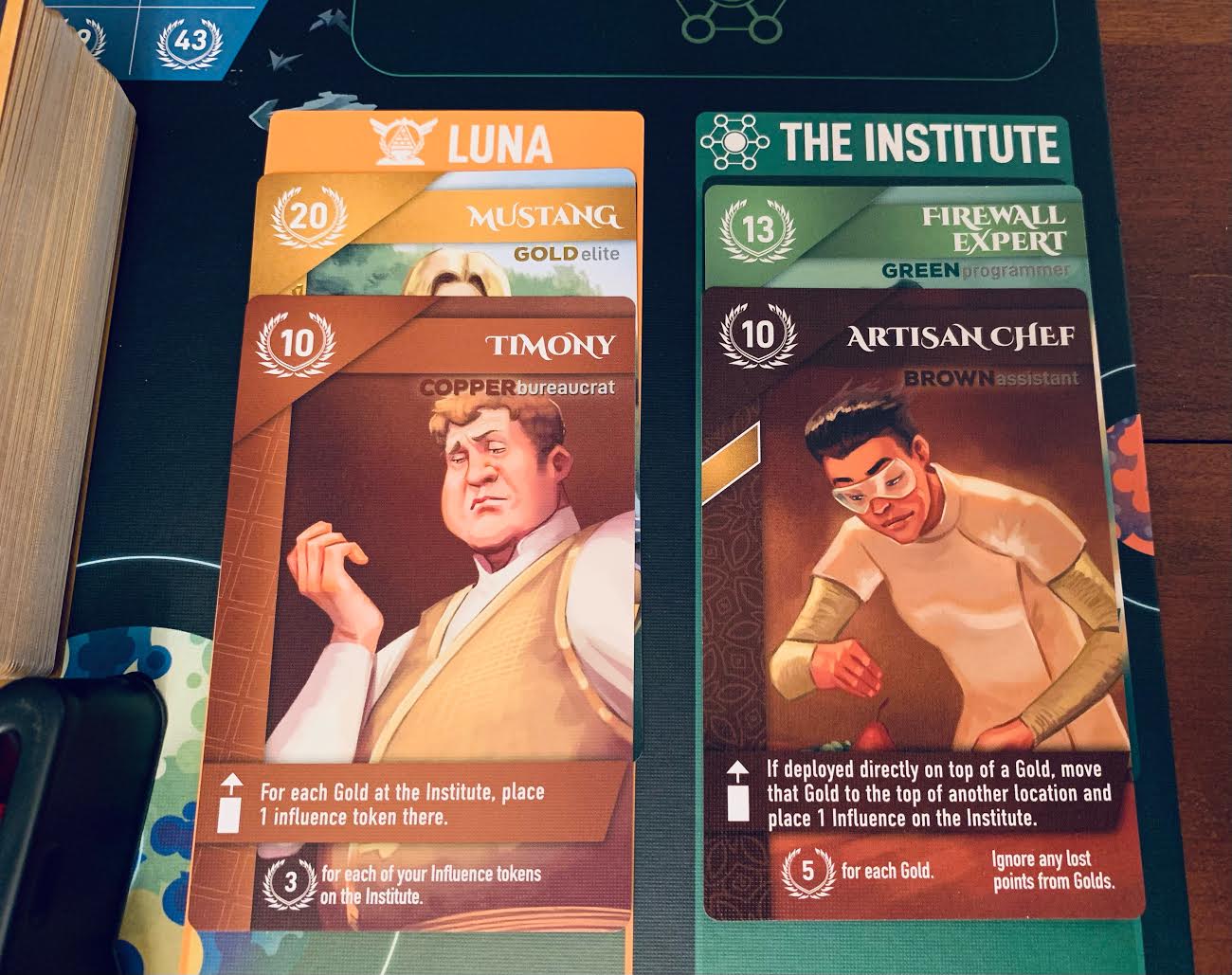 The bonuses of 3 of the 4 board locations help players fulfill the in-game objectives: Jupiter allows players to advance on the fleet track, Mars provides helium tokens, and The Institute lets players place influence. The other location, Luna, allows players to claim the “Sovereign” token, which activates their player-specific abilities.

The Sovereign token and the Rising die.

Players continue playing and exchanging cards in this fashion until the game end is triggered. This occurs when either: 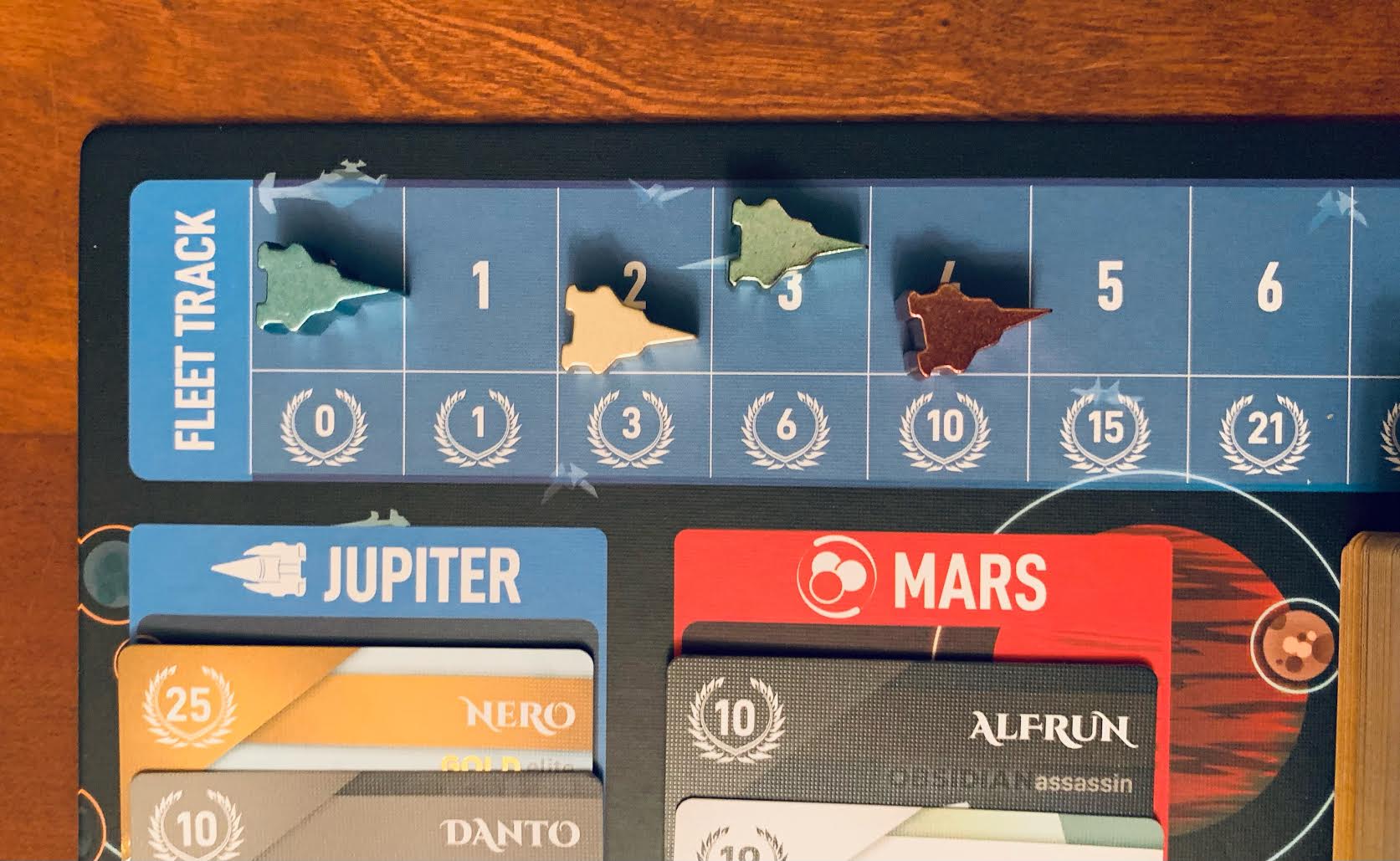 At the end of the game, players total up their points from in-game objectives, cards remaining in hand, and the Sovereign token (worth 10 points to the player holding it). The player with the most points wins!

Stonemaier Games’ announcement of Red Rising was the first I had ever heard of the Pierce Brown series. Since I haven’t read the books, I can’t comment on the narrative integration, but I can say that this game felt thematic enough that it made me want to check out the books. Even though I didn’t understand the thematic ties when I played the game, I could tell that there were thematic ties, and that was enough to pique my interest.

Gameplay-wise, Red Rising is pretty simple, which helps it to feel accessible to non-gamers. The whole experience boils down to players choosing 1 of 2 actions each turn, but the real meat of the game lies in crafting a hand of cards with synergistic combos. As players exchange cards throughout the game, they need to always keep their eyes on endgame scoring, and therein lies the strategy. 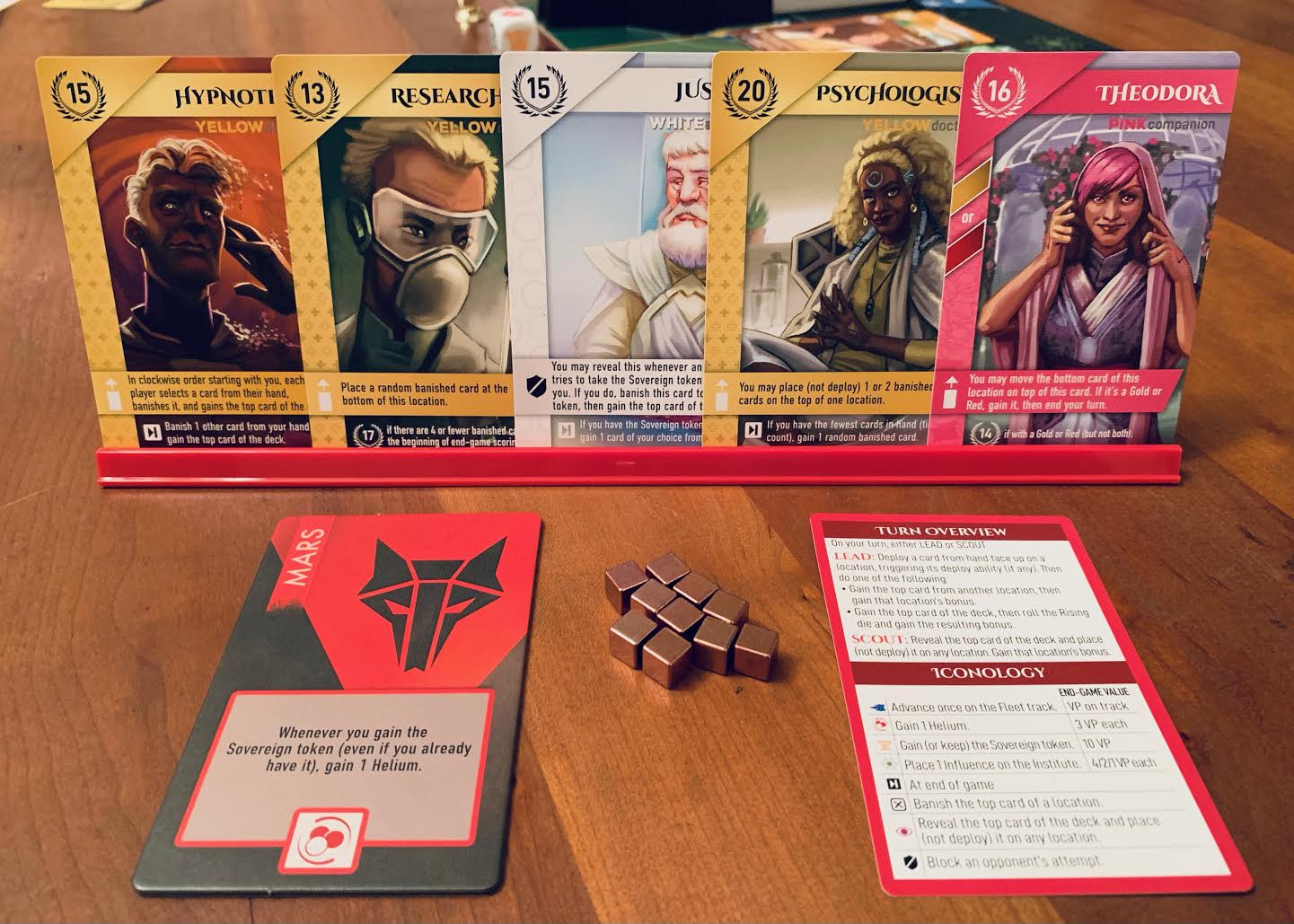 Though this game is nothing at all like Reef, it has a nuance that reminds me of it – the cards never seem to work together the way players want them to. When playing Red Rising, players feel a constant push and pull between wanting to spend cards for their abilities, but also to hold onto them for endgame scoring. This makes for lots of tough, interesting decisions, but it also opens the door to serious AP-induced downtime. Players always have a lot to consider, which can make turns drag, especially at higher player counts. I felt that a 4-player game of Red Rising took too long; I wouldn’t even think of playing a full 6-player game.

Additionally, the components in the Collector’s Edition have some issues. For starters, the card stands are quite narrow, so they fall over very easily. It is almost guaranteed that in any given game, everyone’s stand will fall over at least once. Additionally, though the metal components are pleasingly weighty and tactile, their colors can be quite difficult to distinguish. The green and blue cubes, for instance, have an extremely similar hue, so trying to differentiate them can be a real challenge. (This is one instance where plastic components might have been a better choice than metal, since plastic colors can be far more vibrant. In this regard, the retail version of Red Rising may actually be preferable to the Collector’s Edition.)

Overall, Red Rising is an interesting game, but I don’t expect to be pulling off my shelf as often as, say, Wingspan or Viticulture. It offers some interesting challenges, so there are definitely things to like about it, but it is weighed down somewhat by component and downtime issues. I do recommend giving it a try, but it might be worth waiting for it to go on sale at your local game store.

A review copy was provided by Stonemaier Games.

Red Rising offers some interesting challenges, but it is weighed down somewhat by component and downtime issues. I do recommend giving it a try, but it might be worth waiting for it to go on sale at your local game store.