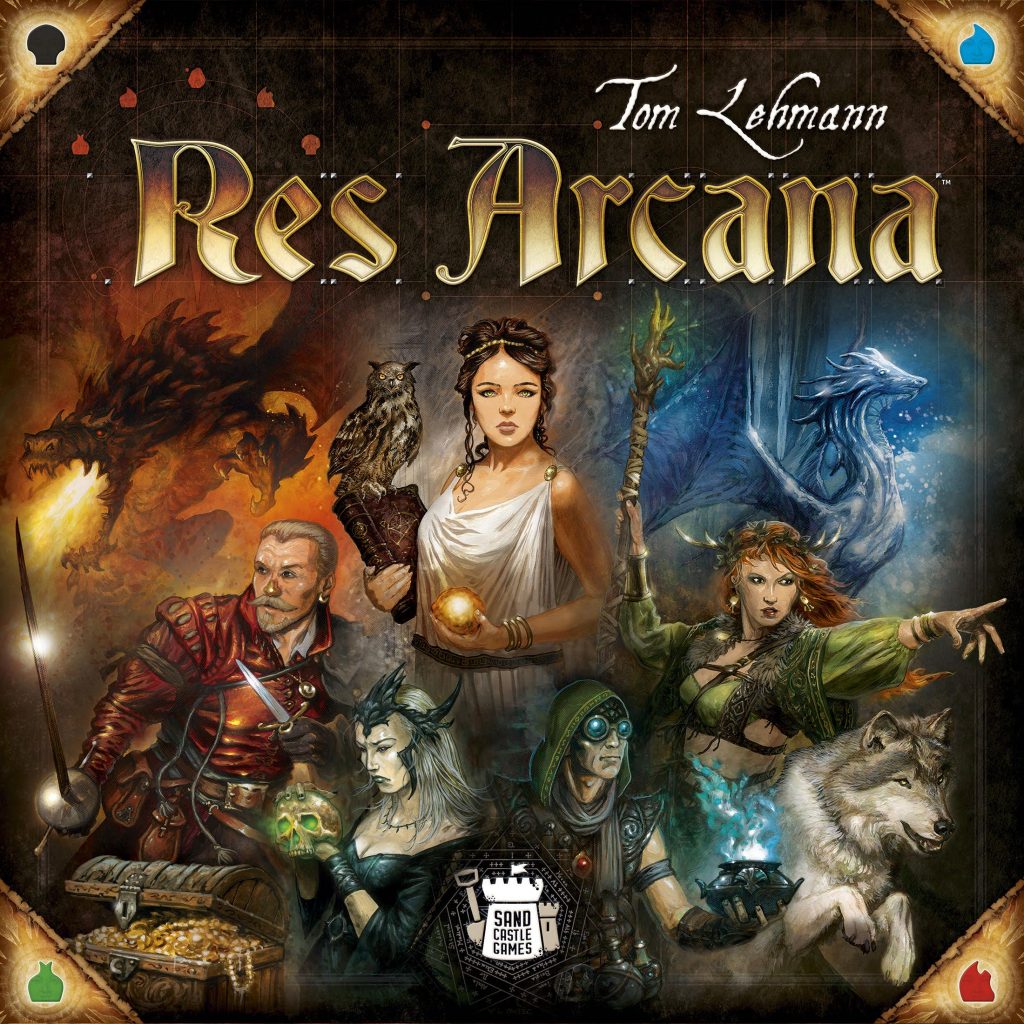 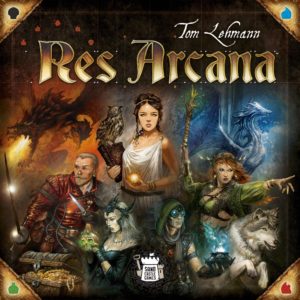 [This review has been updated. The original score was a 5.5. Reviewing a review copy of the expansion forced me to play the game more, which changed my opinion greatly.]

One difficulty with having a blockbuster title under your belt is trying to get out from under the game’s shadow. Tom Lehmann had a huge winner in 2007’s Race for the Galaxy—arguably the first game that showed Eurogames could blend with the crazy cardplay of Magic: the Gathering, leading to Dominion just a few years later. Mr. Lehmann has worked on a variety of other card games, but to my knowledge, Res Arcana is the first to be distributed by the powerhouse Asmodee, and it is the first title from publisher Sand Castle Games. Can the game stack up against the Race legacy? Let’s find out!

The game is about mages fighting each other, so be wary of any concerns you might have about witchcraft / sorcery. The game is not explicitly violent; cards represent weapons, but I do not recall any blood or gore on the cards. There are a few revealing outfits (see the Druid below for an example), but nothing extreme.

[What’s here is my original review of Res Arcana. Look for the “Re-Review” header to see me respond to my own criticisms.]

The first thing you are likely to notice while playing Res Arcana, or even reading the rulebook, is its… sparseness. Players are only given 8-card decks! And there is little-to-no way of manipulating the contents of that deck. Furthermore, on a standard turn, players draw only one card. Instead, players spend much of their time manipulating other things that are in play. Players are vying over Places of Power and Monuments for points, but they also receive abilities from those components. Each player also has a magic item to use each turn, and swaps it out for a different each turn, leading to players vying for turn order not only to be first, but also to get a specific item they want. For yet another angle, players each have a specific “Mage” identity with a unique ability. Lastly, the Artifacts in your deck, as well as Monuments and Places of Power, all require resources to claim or put into play. Many turns are spent simply pushing cubes around: swapping resources for others, discarding cards for resources, activating a single ability for resources, and so on. To get straight to the point: That’s boring.

Ticket to Ride is a game that works in a same way, with each players taking one action at a time. But a high, clear tension about where players might beat you to the punch makes those simple, short turns carry a serious weight. In Res Arcana, you spend the first twenty minutes of the game in your own head, sorting out your hand, how it works with the items and the Monuments and Places of Power available, trying to figure out the optimal path forward. I like doing those things, which is why I like card games in the first place. But here, you are doing it verrry slowly, while waiting patiently for your opponent to do something that, for now, seems completely unrelated to what you are doing. Sure, there are minor interactions, but the game feels like multiplayer solitaire—until isn’t, which happens too late in the game and too quickly compared to the slow buildup. The box lies—this is a 60-90 minute game, maybe 30 minutes for a duel between two (not 3-4) very experienced players.

Dominion has the same criticism, but Dominion is also full of crazy combos. Maybe it’s boring to be on the wrong side of a 20-card turn, but you can at least appreciate how impressive and awesome combos like that can be. I’m just not that impressed when my opponent gets four resources this turn instead of three, yay!!

It doesn’t help that the game has one of the most generic takes on one of the most generic settings. Medieval fantasy is plenty overused, but I enjoy the setting and am happy with it when some solid world-building has been done. Instead, the Mage names are… “Druid”! “Necromancer!” “Scholar!” The characters don’t even have names! Lots of flavor text, some actual unique names, more distinct artwork, and perhaps I would have something to invest in while my opponents push their cubes around.

Look, Res Arcana works. It’s a tight, clean design that does a lot with a little. But it takes way too long to do it, and makes no attempt to invest you thematically in what you are doing. It lacks any kind of world-building, particularly compared to games like Magic or KeyForge but fails to make up for that with the exciting, combo-tastic gameplay of Dominion or, dare I say it, Race for the Galaxy, or other thematically weak games. You have to give me one or the other, at least, even though I want both.

It turns out that Res Arcana is a very good game, and I was a fool for thinking that a game from the designer of Race for the Galaxy — a game that took me years to appreciate, and is now one of my favorite games of all time — would be easy for me to digest.

When I originally reviewed Res Arcana, I had played it three times; now I’ve played it ten. Playing with one other experienced player takes 30 to 40 minutes, which is a much more appropriate length for the game, and a more appropriate player count. I never want to play this again with four or more players.

Nor do I want to play again without the Draft Variant, which is more like the “real game”. With only eight cards in each deck, the draft is crucial, allowing you to see what other players might have, and allowing you to combine cards in your deck to make key combos. I would even do it with new players; what’s the real difference between a bad draft and a random starting deck, regardless?

So, my first mistake was playing without the draft and with the wrong player count, making the game too long and too random. However, there was one other crucial misunderstanding that I had, and that’s about basically how the game works.

I’ve long defended Kingdom Builder against people who insist it’s pure luck because of the 1-card hand, and my defense is always this: that card is not really your hand; the action tokens you collect are your hand. Similarly, players need to be flexible in Res Arcana and few the Mages, Magic Items, Monuments, and Places of Power as parts of their hand, too, even if they haven’t been claimed yet. This is obvious in retrospect, but I didn’t truly “feel” it until I saw a comment from the designer on BoardGameGeek, stating that players were undervaluing the ability to discard a card from hand for resources. Making that one little mental adjustment completely opened up the game for me, and now not only do I see the strategy, but I also see the incredible amount of tension in every move that I could not find prior.

I maintain that the theme of this game and its implementation are beyond boring, but I also have to admit that the components are fantastic and the artwork is serviceable, and that’s enough when the game is good.

Res Arcana is a great engine-building game, and one I easily recommend… if you are willing to play it six or seven times, not three, before you form your opinion.

Thank you to Asmodee North America for providing a review copy of Res Arcana.

Res Arcana requires some investment and some key stipulations (draft, lower player count) to make it worthwhile, but it's a very good engine-building game.