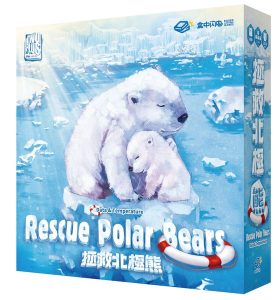 Rescue Polar Bears is a Taiwanese game that recently received US distribution from Mayday Games. With amazing production quality and streamlined gameplay, it is a great game for all ages.

This game has no objectionable content, but it deals with the very difficult, real-world issue of climate change. Seeing polar bears in danger as their habitat melts may be tough for some players to stomach.

Rescue Polar Bears is a cooperative game set in the near future, where the ice caps have almost completely melted. A group of scientists attempt to help the imperiled bears by collecting environmental data to persuade world governments to take action.

The game is played out on a grid of hex tiles, each showing either water or ice. At the top and bottom of the grid are base tiles, from which rescue helicopters can be deployed to save drowning bears. Players must be careful however, since these one-time-use helicopters are limited. 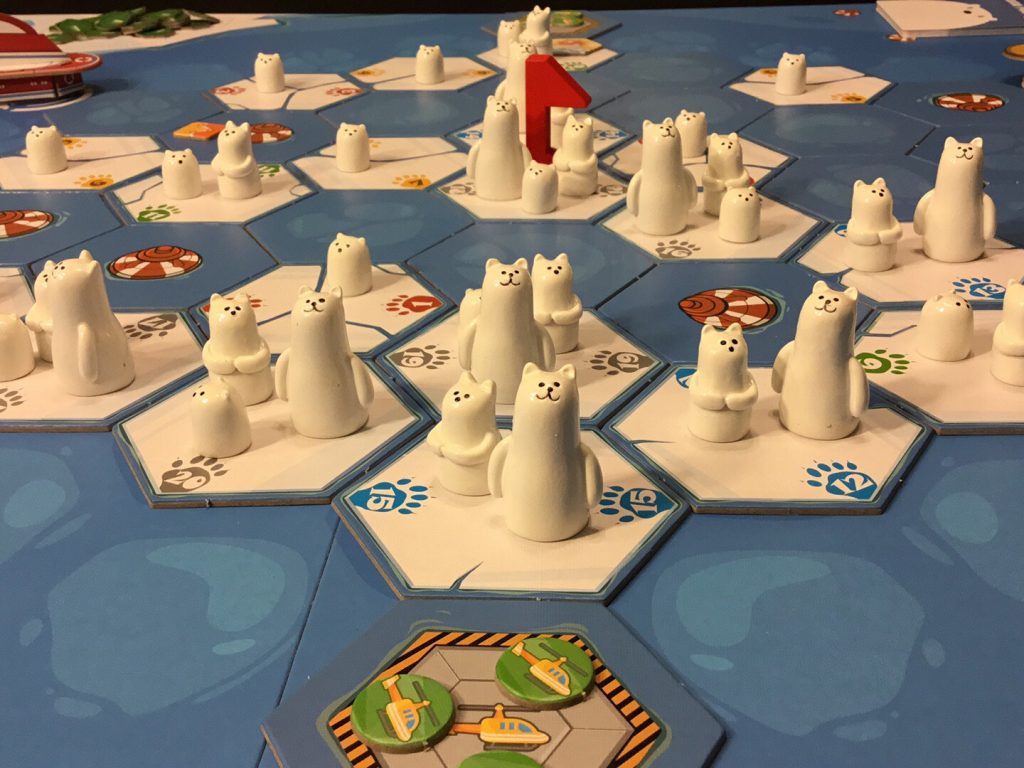 One to three bears begin on each ice tile. Along the side of the board is the temperature track, which will rise and fall throughout the game. It begins at 8°.

The goal of the game is to collect 20 data tokens (15 in a two-player game). Thematically, this represents players gathering enough scientific evidence to make the case against climate change. Normally, there will only be one data token on the board at a time, so as they pop up, players will have to gather each one individually. They lose if the temperature is above 20° at the end of a turn, or if a bear falls into the sea and there are no rescue helicopters left. When the game is set up, it will look like this: 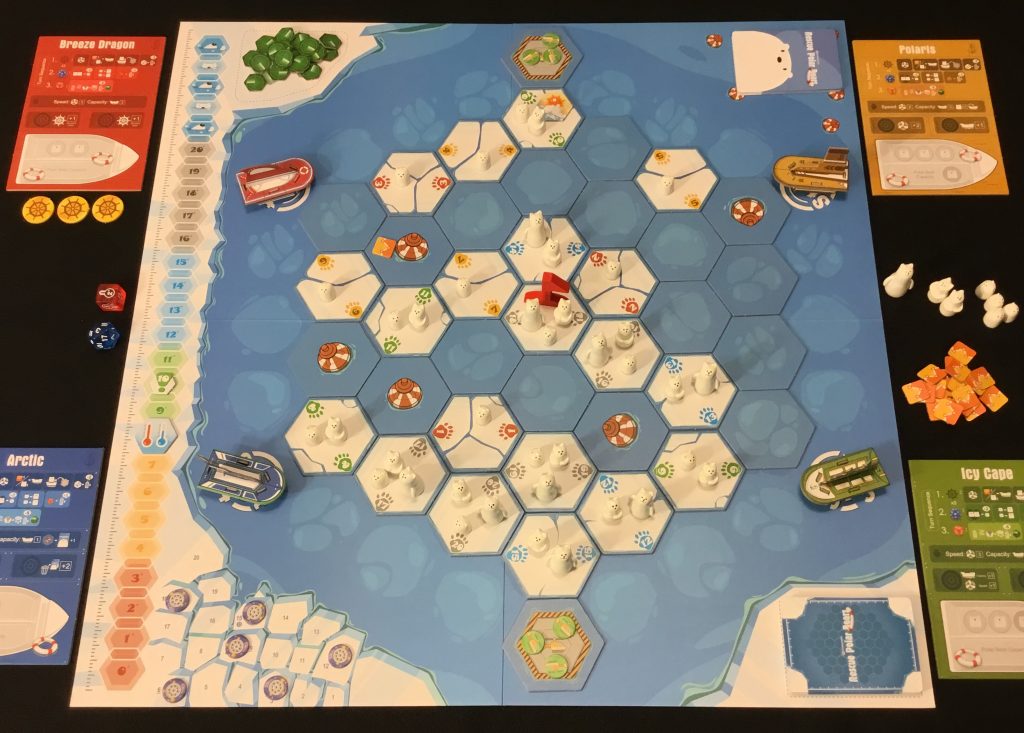 Each player controls an arctic research vessel, which has its own special ability. These vessels may take three actions per turn, from the following available:

This brings up an important point: each ice tile can hold a maximum of 3 bears. If a tile ever has more, bears must flee to adjacent tiles until there are only 3 left. Therefore, as the ice melts, the bears’ habitat gets increasingly tighter. If a bear is unable to flee because all adjacent tiles are either full or have melted, the bear falls in the water and must be rescued with a helicopter.

Here is an example of how a turn might go: 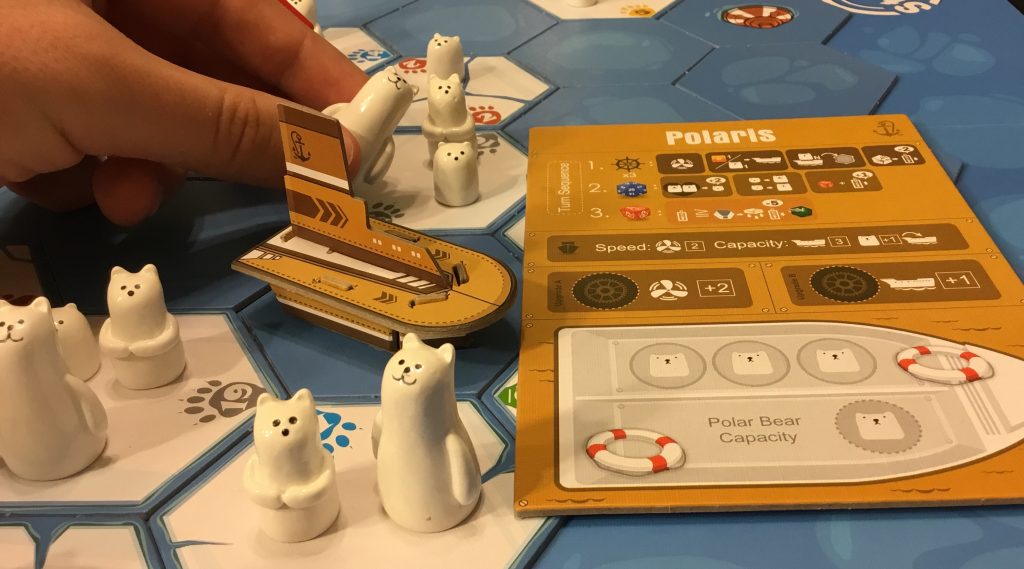 Suppose the yellow player begins his turn adjacent to three ice tiles. Since he doesn’t have to move to be in loading range, he can spend all 3 of his actions picking up bears (and this would be a good idea, since these spaces are at or close to capacity). For one action each, yellow can pick up 3 bears, adding them to his player board. Note that his ship is now full, so he must unload these bears before he can add more, unless he is able to use a special ability to increase his capacity (the additional bear space on his board). Next turn, he will likely want to move to a base tile to unload them. 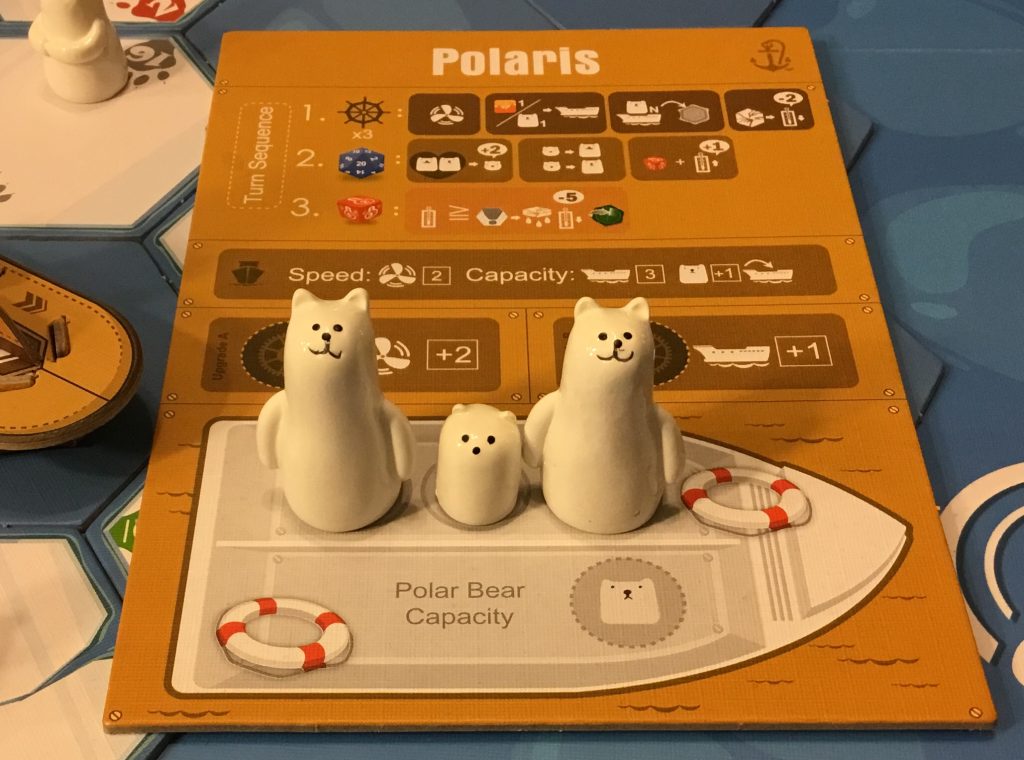 At the end of each turn, the active player rolls the blue, 20-sided die. If the tile with the corresponding number is still in the game, it is activated. Usually, this results in one of two outcomes:

Note that reproduction causes a space to be over capacity, as shown below: 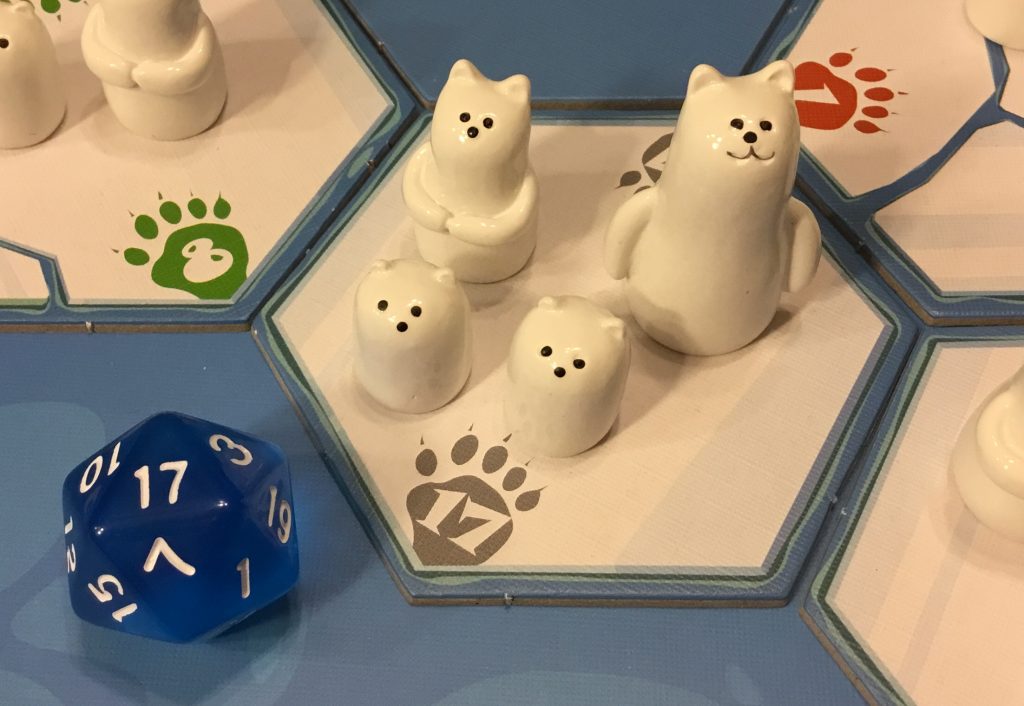 Since a male and a female were together on space 17 when it was rolled, they reproduce, yielding 2 cubs. The space is now over capacity, so one bear must immediately flee.

After the blue die has been resolved, the active player rolls the red, 6-sided die. The temperature then increases 2-5°, based on the result. (Certain game effects may also add to it.)

At all times, there is a token corresponding to one of the ice tiles on the temperature track. To illustrate: 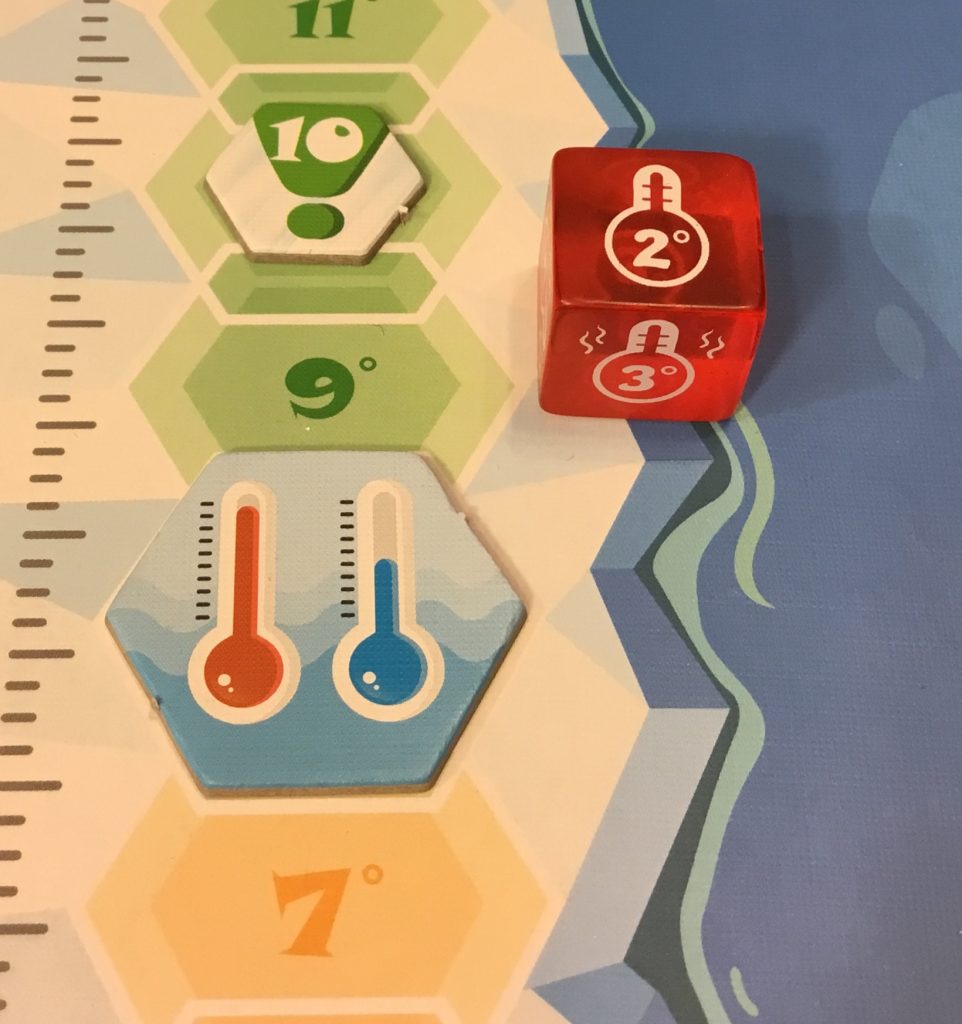 Suppose the “10” token was drawn during setup. It is placed on space 10 of the temperature track, and a warning token is placed on ice tile 10 to indicate that it is at-risk: 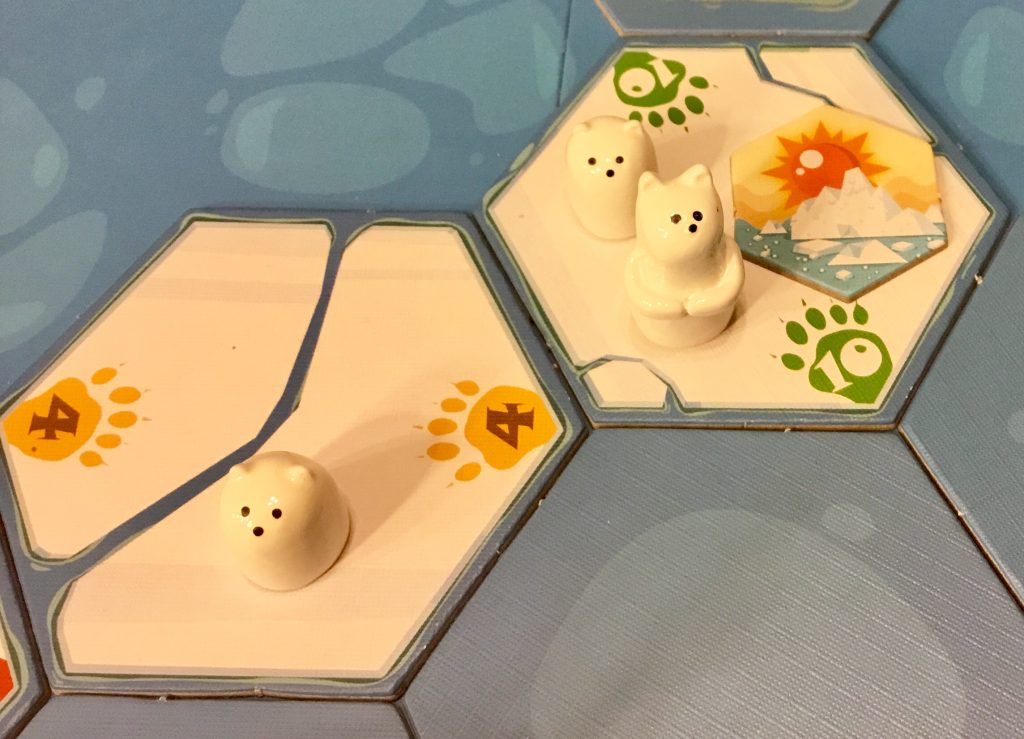 If the temperature meets or exceeds this number at the end of a turn, the at-risk tile melts. This is obviously bad, since all bears on the tile must flee, but a melted ice tile lowers the temperature by 5°, which is quite helpful.

Certain water spaces provide one-time assistance to players. If a boat lands on a support tile (with the red buoy), the active player draws and resolves the top support card. As an example: 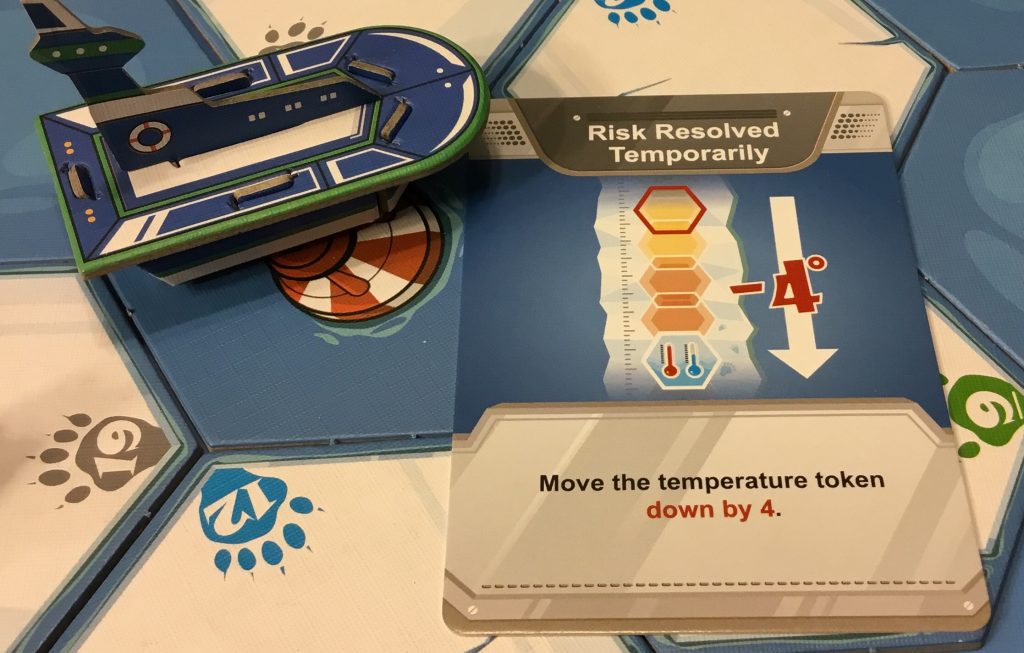 But of course, the real goal is to collect data tokens: 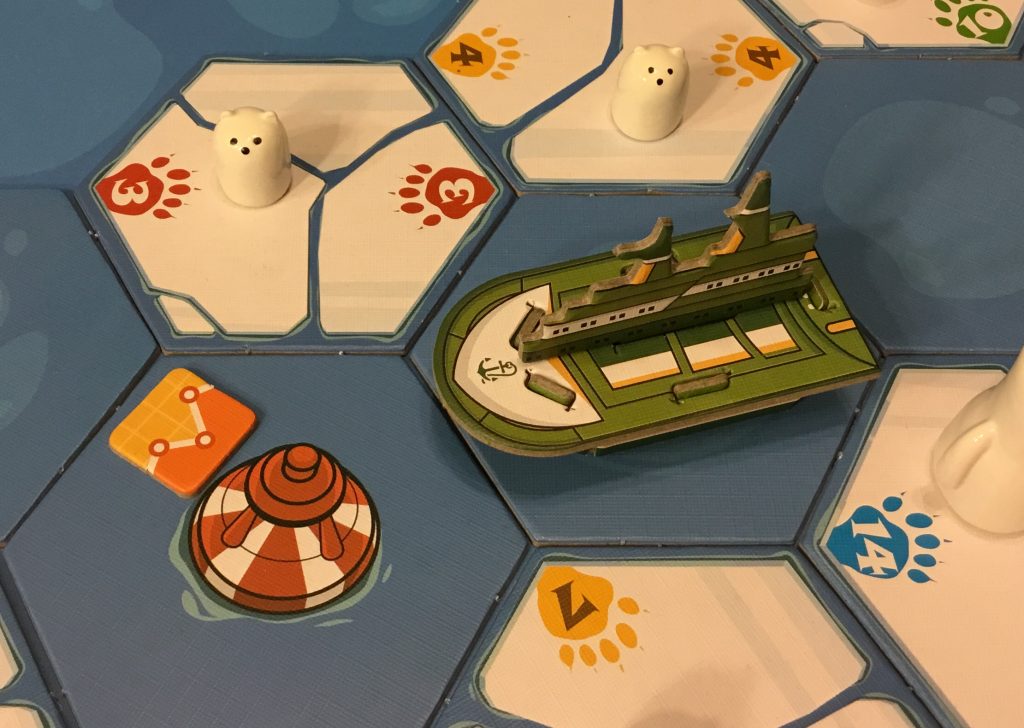 If enough data tokens are collected, players win. Otherwise, if the temperature exceeds 20° at the end of a turn, or if a bear falls in the water and cannot be rescued, players lose.

Rescue Polar Bears is a game with a deeper meaning. It is an excellent cooperative experience, but also a poignant commentary on the very real threat of climate change.

The game’s production is stellar; in my opinion, it’s the best-looking tabletop game this year. The stars of the show are the bear figures, of course. They are absolutely adorable, so it’s gut-wrenching when one of them falls in the water. The dice and tiles are nicely designed, and the three-dimensionality of the research vessels really make the game pop visually.

From a design perspective, Rescue Polar Bears is well-made. With simple mechanics, it plays quickly and encourages teamwork and groupthink. It will immediately feel familiar to fans of cooperative games, and newbies should have no problem understanding how to play.

The strategy offers some subtleties, as well. When loading a bear onto a vessel, for example, players must carefully consider which bear should be chosen. Is it better to separate males and females so the board doesn’t fill up too fast with cubs? Or should they rescue cubs before they become adults and begin reproducing? Similarly, as players fight against the temperature track, they may wish to break ice tiles to keep it cold, but doing so decreases the amount of bears that can be on the board.

As the game progresses, it’s hard not to ponder the real-world implications of global warming, and I think that’s the point. Unlike your average dungeon-crawl adventure, Rescue Polar Bears requires a certain emotional investment from players. I really, really enjoy it and recommend it, but I can see the theme being upsetting to some players. With that said, though, it’s very refreshing to see tabletop games addressing complex social issues.

Rescue Polar Bears is a very good cooperative game—not one to be missed.

A review copy was provided by Mayday Games.

Rescue Polar Bears is fantastic—one of the best games of 2018.