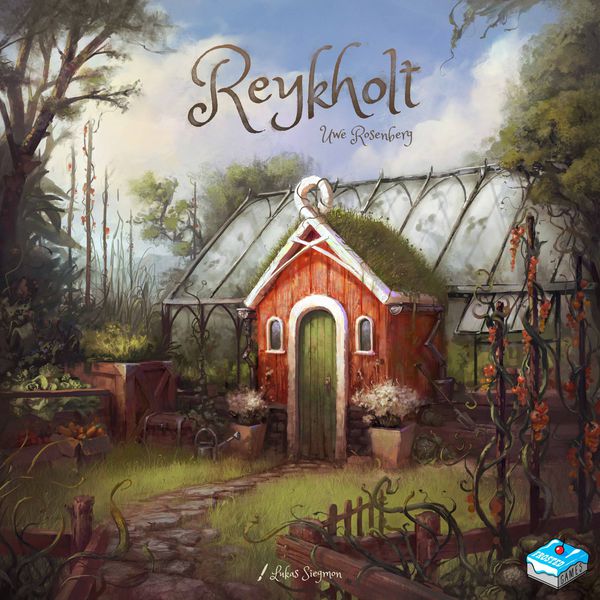 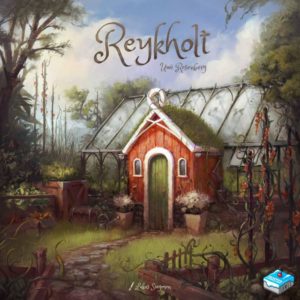 Reykholt is a new release from renowned designer Uwe Rosenberg. Heavier than his earlier games like Bohnanza and Mamma Mia!, but lighter than his later designs like Le Havre and Caverna, Reykholt is a great introduction to euro-style strategy games.

Before I played Reykholt, I heard it touted as an “Intro to Uwe Rosenberg.” If you aren’t familiar with him, he is one of the most acclaimed designers in the industry; basically any game he creates goes on to be a hit among hobbyists. To newcomers, however, his later games can seem a bit intimidating, with lots of interlocking rules systems and components by the zillion.

Reykholt breaks this mold, however. Light on rules, this family-weight worker placement game has players acquiring greenhouses, planting seeds, and growing vegetables. Over the course of 7 rounds, players attempt to move their “managers” (score markers) along the outer track—at the end of the game, the person who has progressed the farthest wins.

Each round, players take turns placing their 3 worker pieces and taking the corresponding actions. Action spaces allow players to, for example, take free vegetables, acquire new greenhouses, or plant vegetables in their greenhouses to produce more of them. 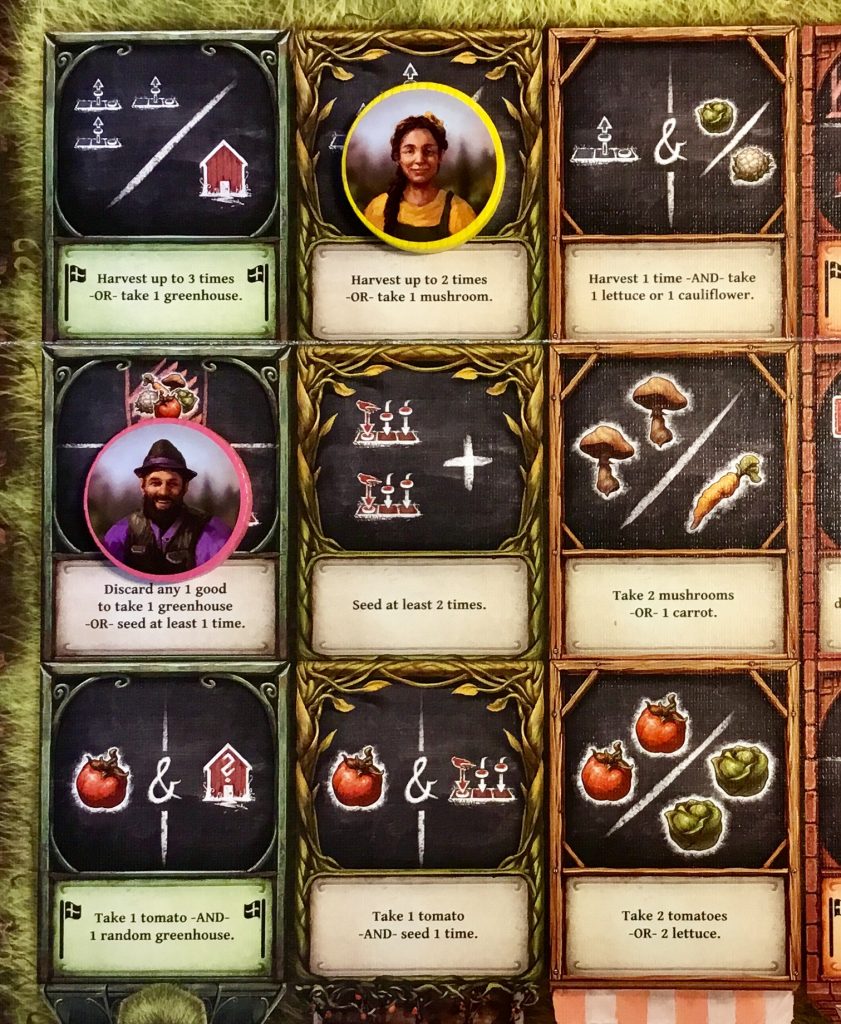 The core of the game involves seeding, growing, and harvesting crops from greenhouses. Normally, a greenhouse can have only one type of vegetable in it at a time, and its size dictates which ones it can house. In general, smaller greenhouses can accommodate more varieties of veggies, but they produce fewer of them than larger greenhouses.

Here is a brief example of how seeding might look:

Suppose the yellow player has tomatoes in her possession from a “Take 2 tomatoes” action she took previously. On her turn, she selects an action which allows her to seed. 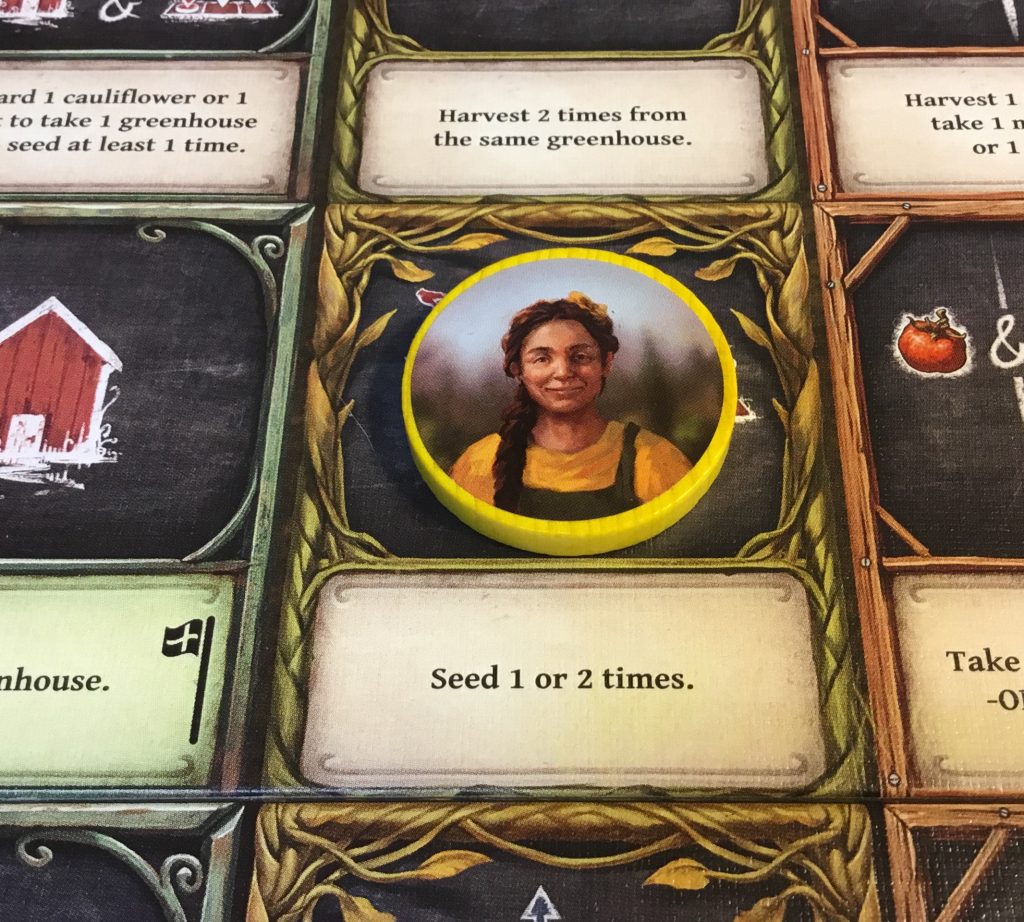 Since she has an empty greenhouse, she places one of her tomatoes in it. In order to seed, a greenhouse must be empty. 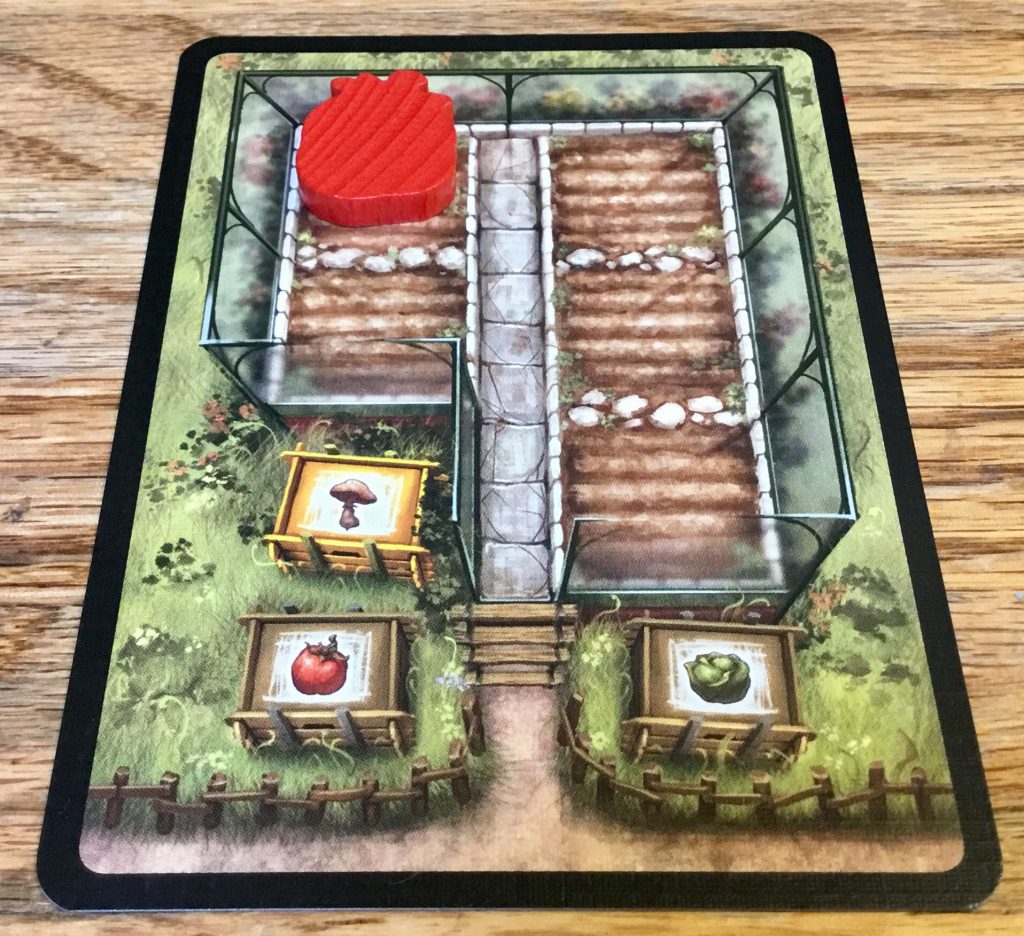 (Notice that this greenhouse can hold tomatoes, lettuce, or mushrooms, as indicated. If the player wanted to plant carrots or cauliflower instead, she would have to acquire a greenhouse that allows them.)

When the player seeds her tomato, she fills the remaining spaces with tomatoes from the supply. 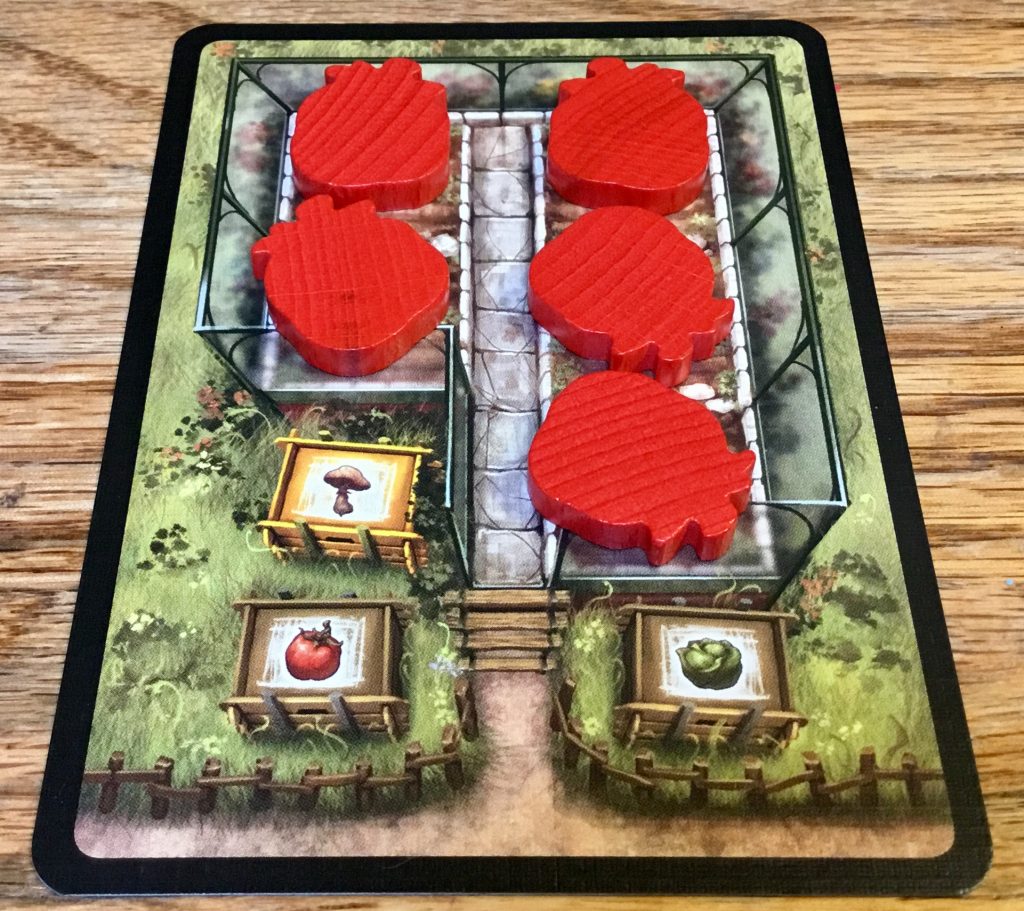 If a future action allows the yellow player to harvest a vegetable, she may take one of these tomatoes into her stock (or a vegetable from a different greenhouse). 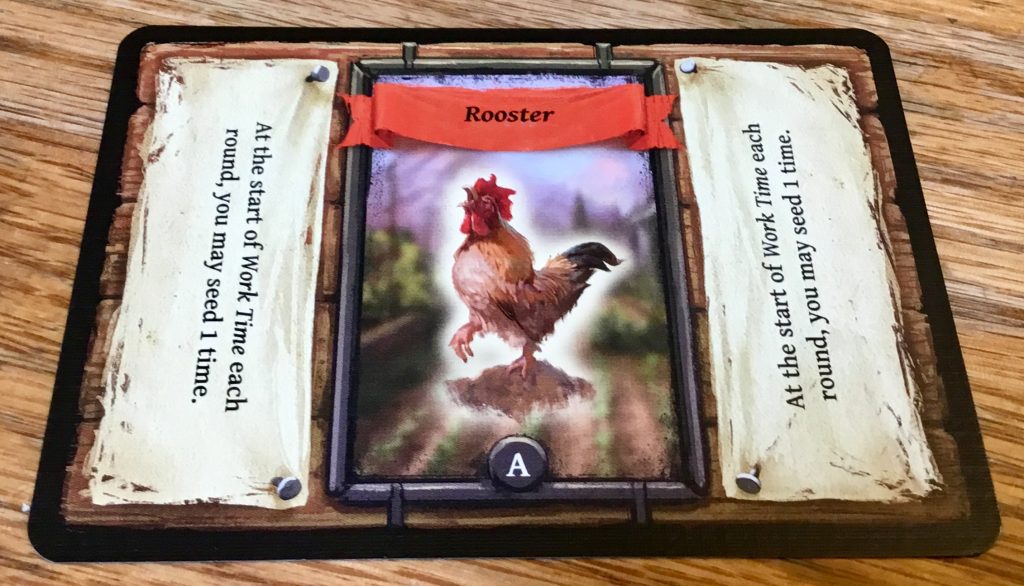 Notice the unusual card layout—sometimes, two neighboring players may share a service card, so the card design allows it to be readable to both players when placed between them.

Once all actions have been executed, each player gets the chance to move a manager piece along the outside track—again, this is the ultimate goal of Reykholt. One at a time, players spends vegetables from their stock to advance their pawn, paying the listed cost for each space they enter. A zoomed-out view of the board will illustrate how the track looks, and how the movement costs increase: 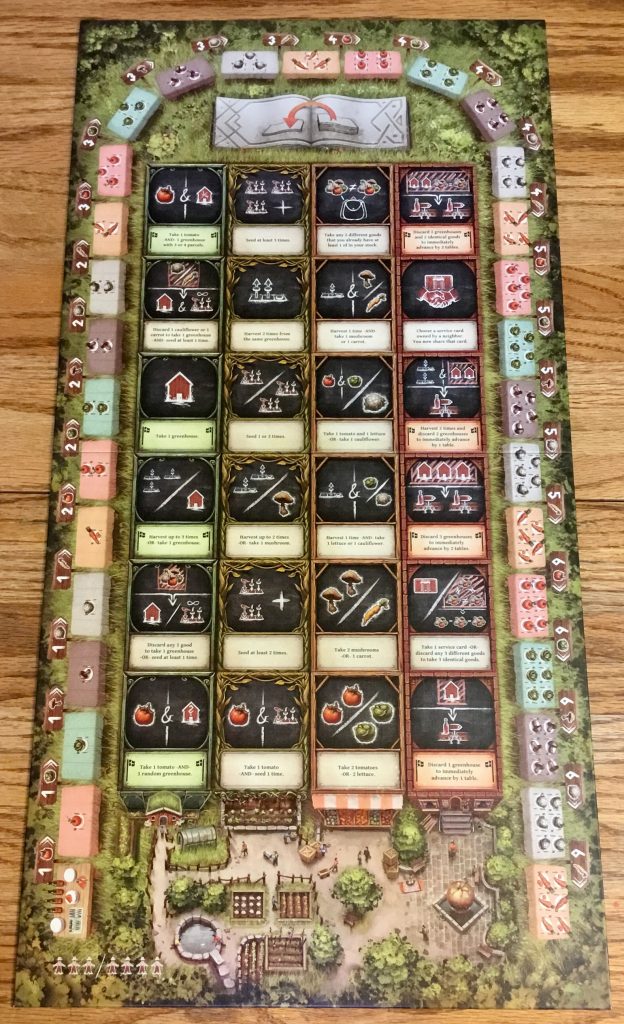 As their managers move each turn, all players get one “free movement,” in which they do not pay the listed cost to enter a space. Instead, they RECEIVE the indicated vegetables for free! (This is my favorite mechanism in the game.)

Here is an example of manager movement: 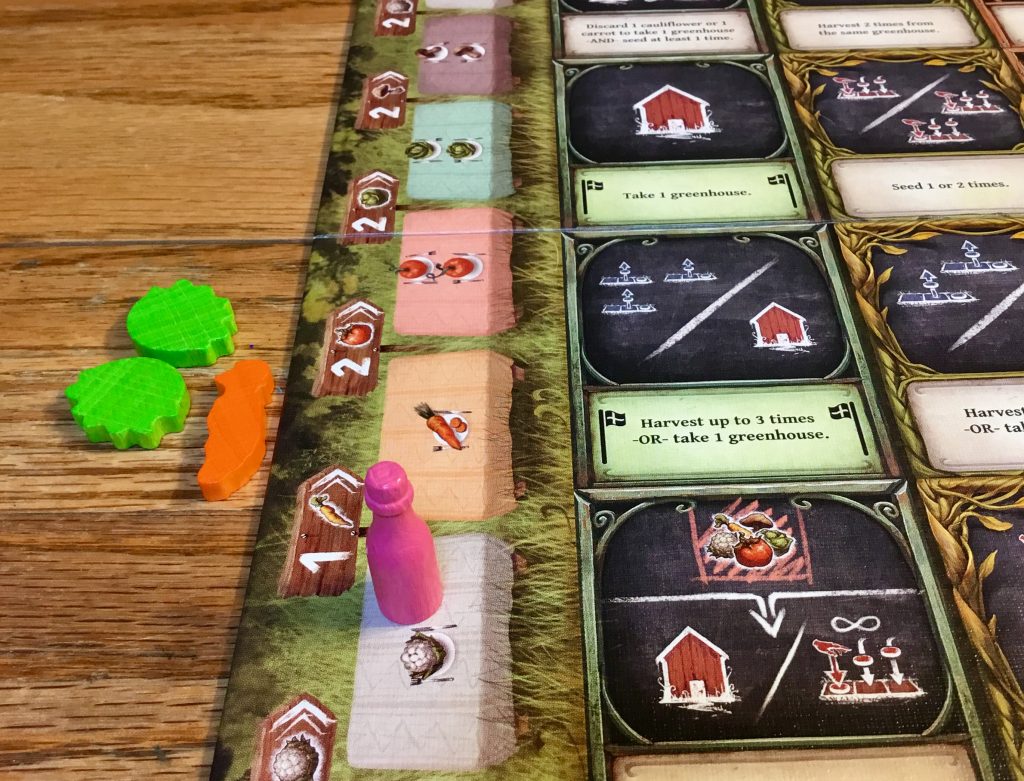 The pink player has 2 lettuce and 1 carrot in his stock. Since the next space on the track costs a single carrot to enter, he discards his carrot and moves. The following space, however, costs 2 tomatoes, which he lacks. Thus, he must use his bonus movement to enter this space, earning him 2 tomatoes. Then, spending his lettuce, he may move a final time. He must now stop moving, because he cannot pay the next space’s cost and has already used the bonus for this round.

Managers move in order, starting with the one who has progressed farthest on the track. If a manager ends its movement in the same space as another manager, it is placed at the front of the space, considered to be ahead of the opponent. At the end of the 7th round, the player whose manager has moved the farthest wins!

The round tracker is stylized to look like a book, with players “turning the page” at the end of each round. Totally unnecessary, but a nice aesthetic touch!

[I should also mention that Reykholt includes a “Story Mode,” which uses a special deck of cards to give the game a bit of narrative flavor. At the time of this writing, I have only just cracked open these cards, so I can’t really comment on this mode yet. That said, it looks interesting, and I suspect it will give the game a bit more replayability.]

Reykholt distills Rosenberg’s signature design style into a palatable, newbie-friendly experience. It has the clever nuances gamers have come to expect from him—earning free resources once per turn instead of spending them, for instance—but it is much simpler to understand than, say, Le Havre or A Feast for Odin. The farming theme is classic Uwe, as well; guy really loves his vegetables.

The production quality is superb. When I first saw the game while scrolling through BoardGameGeek, my eyes locked on the stunning cover art—it looks something out of a fairy tale. Even though 2019 has just begun, I already think Reykholt will be the “Best Box Art of the Year” for me. The brightly-colored vegetable pieces are delightful, and their storage crates are both functional and thematic. The rulebook is clear and concise, a breeze to read through. All in all, this game looks and feels like a high-quality product. 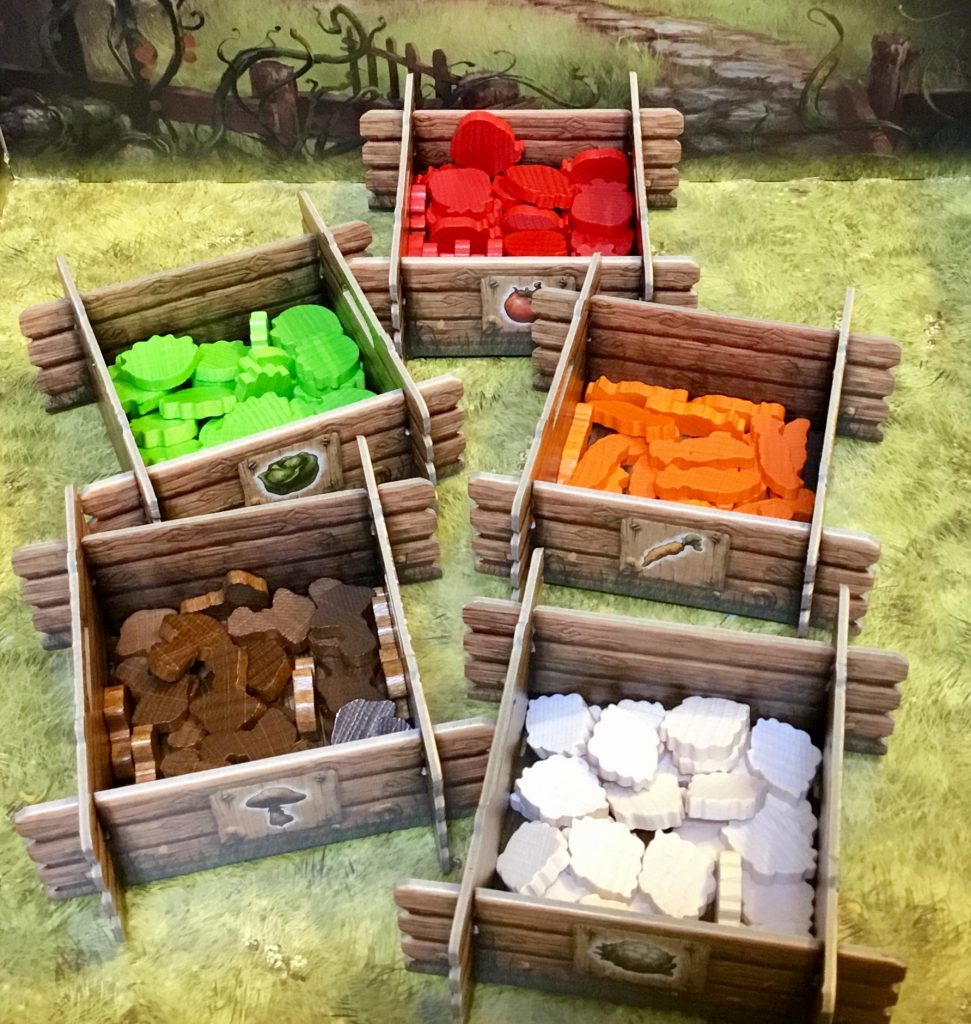 I really enjoy Reykholt‘s gameplay. It’s interesting how getting the most vegetables is not necessarily the best strategy; rather, players need to get the RIGHT vegetables, based on what is needed to advance their manager. The pawns are usually quite close at the end, so even one extra space on the track can make all the difference.

This game offers players a surprising amount of choices. While worker placement games are often very tight with increasingly restrictive options, Reykholt‘s decision matrix is wide open. Since each player has only 3 workers to use, even the person placing the last one has tons of spaces to choose from (as many as 13 in a 4-player game!). This means players always feel like their actions matter—they never have to take an action just because it’s the only one left and they are stuck with it.

Reykholt is a pleasantly brisk experience, with a play time somewhere in the 45-minute range. At first glance, the sheer number of action spaces on the board makes it look like it will be dense and rules-heavy, but players will quickly see that it is simple and clean. Though I haven’t played nearly all of Rosenberg’s games, this is one of my favorites of those that I have played. I greatly enjoy family-weight euro games, and this really fits that bill. It is a perfect “Intro to Uwe Rosenberg,” and I highly recommend it!

Reykholt is a pleasant surprise. With cool theming, slick gameplay, and lovely components, this yet another great Uwe Rosenberg design. Highly recommended, especially for fans of family-weight euros.