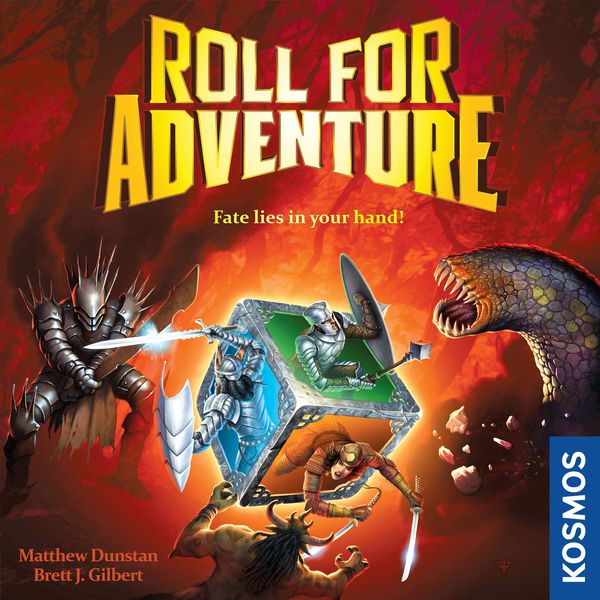 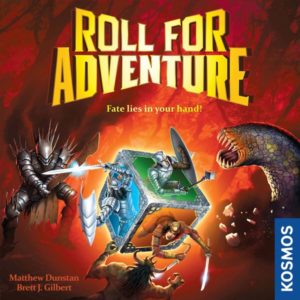 Roll for Adventure is a co-operative dice game of fulfilling objectives to complete mythical quests. It is surprisingly strategic, with lots of choices for players at every turn. It is an excellent offering from KOSMOS.

In Roll for Adventure, players represent brave fantasy characters working together to defeat an ancient evil. The game takes place across four mystical locations, each with their own challenges and perils.

At its core, Roll for Adventure is a dice-placement game. The goal is to collect a number of powerful gemstones (possibly Infinity Stones?) by completing the game’s various mini-objectives. 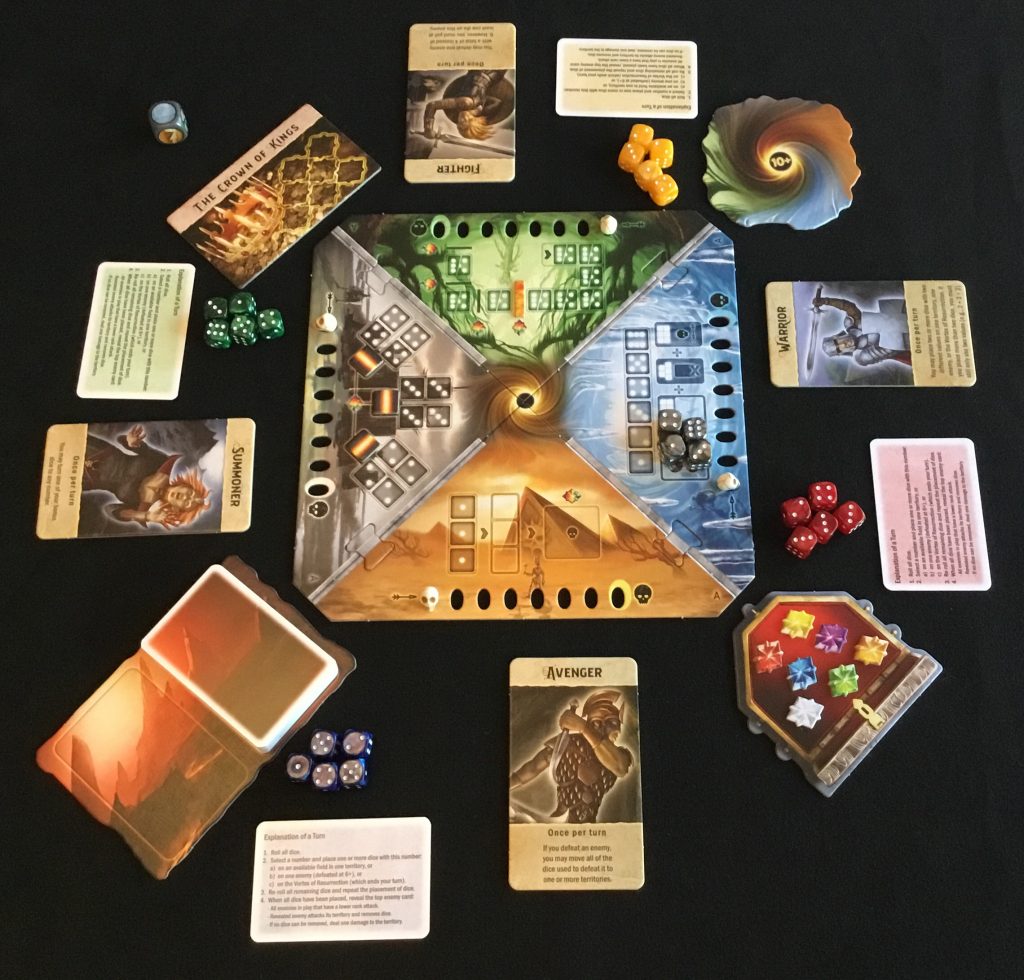 Each player begins with a set of dice and a character card, which lists their unique power. On a player’s turn, she rolls her dice and chooses one or more showing a particular result to place on a location. She then re-rolls her remaining dice and places again, and so on until she has used all of them.

Before I provide a play-by-play turn example, I will briefly explain what challenges await in each of the territories.

The desert requires lots of 1 results. If there are ever three 1’s on the indicated spaces, then one of them moves over to the second column. If that column is ever full – that is, if there have been three complete sets of 1’s placed previously – the players earn a gem.

The fortress requires sets of 2’s, 3’s, and 4’s. If players can accumulate four of a kind, they break down the corresponding barrier. If all three barriers are defeated, players earn a gem.

The forest requires 5’s and 6’s. If players can place enough of them to reach the boundary token, they earn a gem. Each time they do so, the region is reset and the boundary moves farther away, meaning that the difficulty increases for the next time.

The ice cave does not grant gems, but it can provide extra dice and powerful abilities. If players can place four to six unique die results there, they earn a bonus. The more they place, the better it is, obviously.

Below is an example turn: 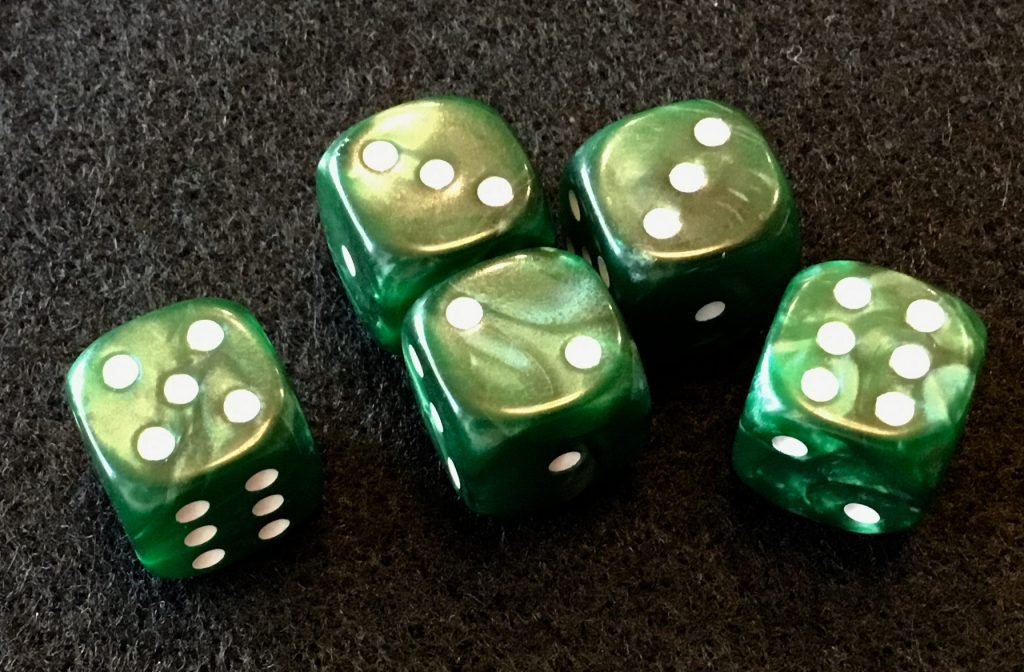 She decides to use the pair of 3’s, and she places them on the fortress. 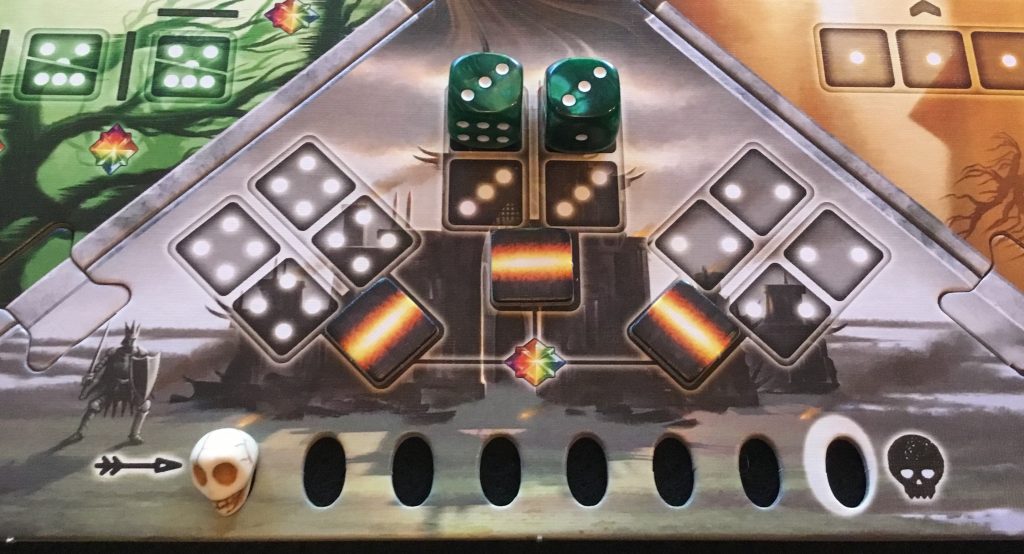 She is now halfway to breaking down the “3” barrier. She then rolls her remaining dice again:

She could put the 4’s on the fortress, as well, but she instead chooses to place the 5 on the forest. 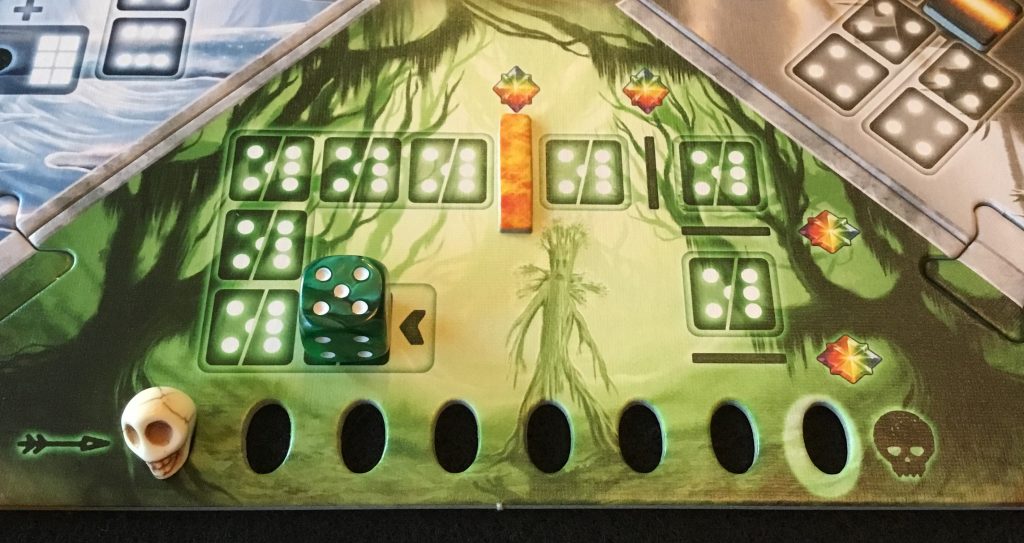 She then rerolls her remaining two dice:

She places the two 1’s on the desert. 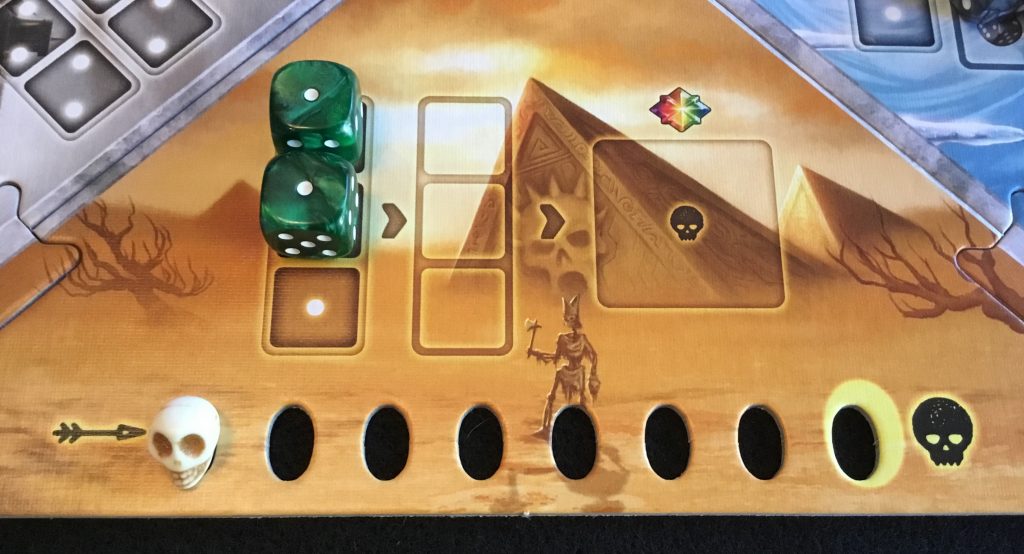 Once the active player has placed all her dice, she moves onto the second phase of her turn – the bad stuff. She reveals a card from the monster deck and places it below the corresponding region. 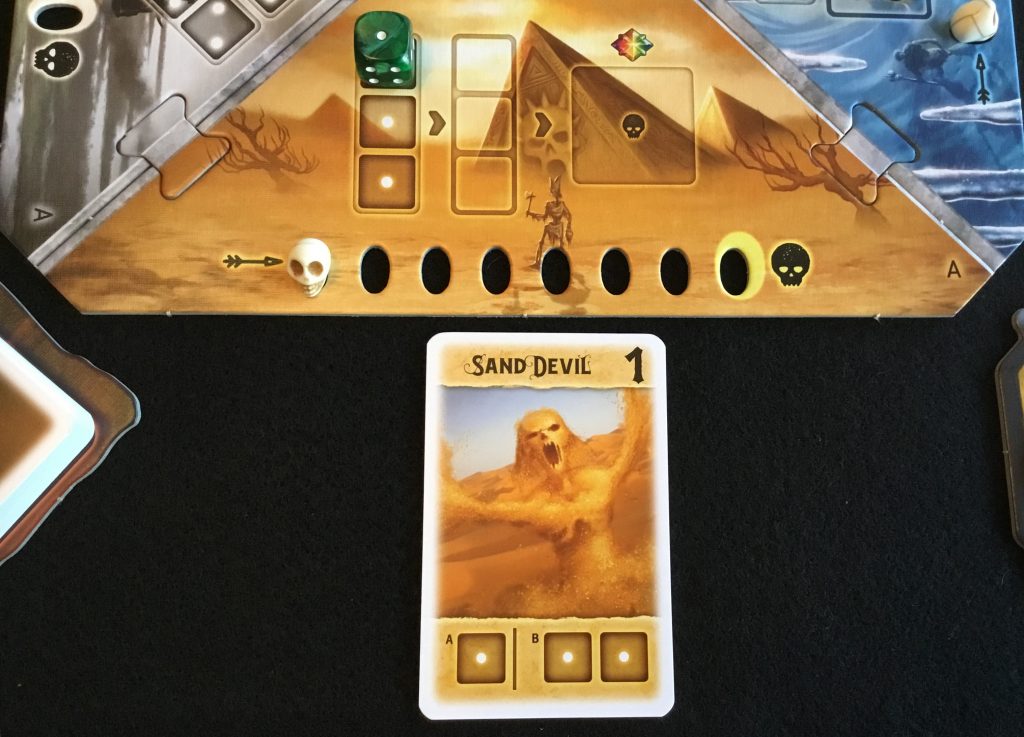 Each monster has a “rank” (the number in the top-right), and an attack ability. When a monster is revealed, any monsters with a lower rank attack, and then the newly-placed monster attacks, as well. To illustrate: 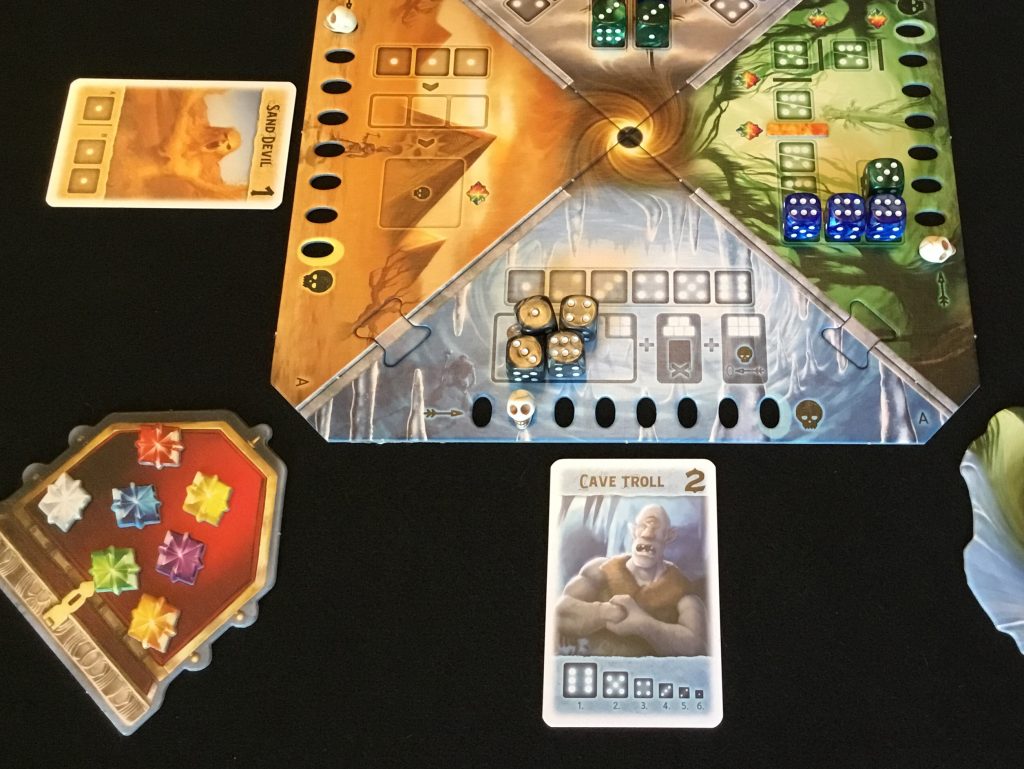 Suppose the Cave Troll is placed in the following round. Since it is rank 2, it first commands the lowered-ranked Sand Devil to attack the desert, and then the troll itself attacks the ice cave.

Monsters force players to remove dice from a region, and if they are unable to, the region itself takes damage. When this happens, the skull marker moves along the damage track. If players can place 6 pips’ worth of dice on a monster, they can remove it.

But then there is also this jerk: 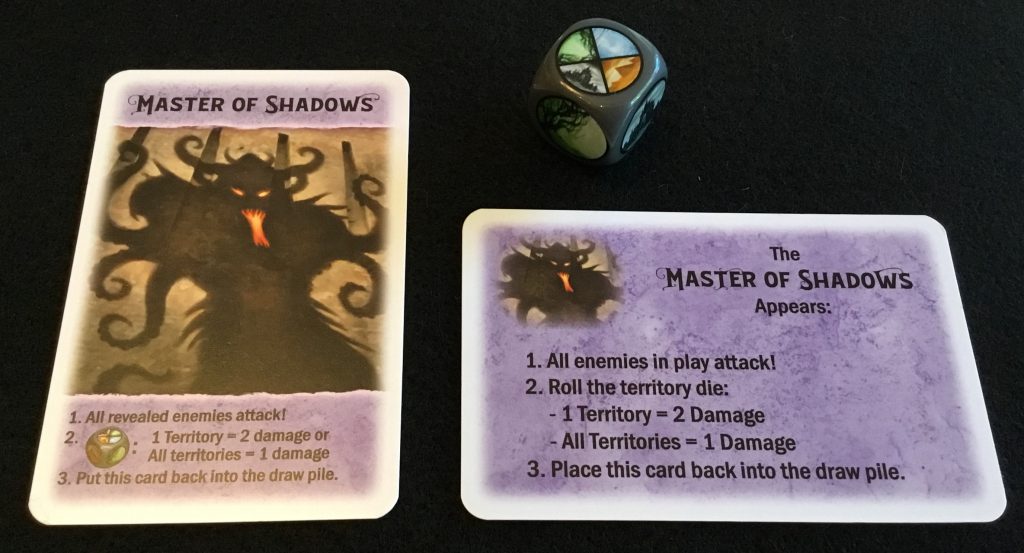 This boss monster is seeded somewhere in the middle third of the deck. When he comes out, he makes ALL enemies attack, then he himself attacks (possibly a lot), and then he goes back in the deck, to be drawn again and again!

If players can collect all required gemstones, they win the game. Otherwise, if a region’s skull marker reaches the end of the damage track, players lose.

Roll for Adventure is a top-notch co-op. It is one of the most strategic dice games I have ever played, and it presents interesting challenges at every turn. Its sense of teamwork is incredibly strong, and players are consistently engaged, even when it is not their turn.

The production quality is high, with a pile of marbled dice and study cardboard components. The game’s art is nicely detailed, and it helps to establish its fantasy-world setting.

I was surprised at how much strategy this game offers. We were constantly wrestling with tough questions: Where should we place our dice? On a monster? On a region? If so, WHICH monster or which region? Which quests should we pursue? Is it better to go for all the quests at once, or focus on one or two at a time? How can we effectively use our characters’ powers? The decision space in this game runs much deeper than one might expect.

It’s also nice that the region tiles offer “A” and “B” sides, with different challenges on each. Players can mix and match them, creating a great deal of modularity. That, in addition to optional monsters, tons of player powers, and variable difficulty, means that players can customize the game to their liking.

All in all, Roll for Adventure is awesome. Do not miss this one.