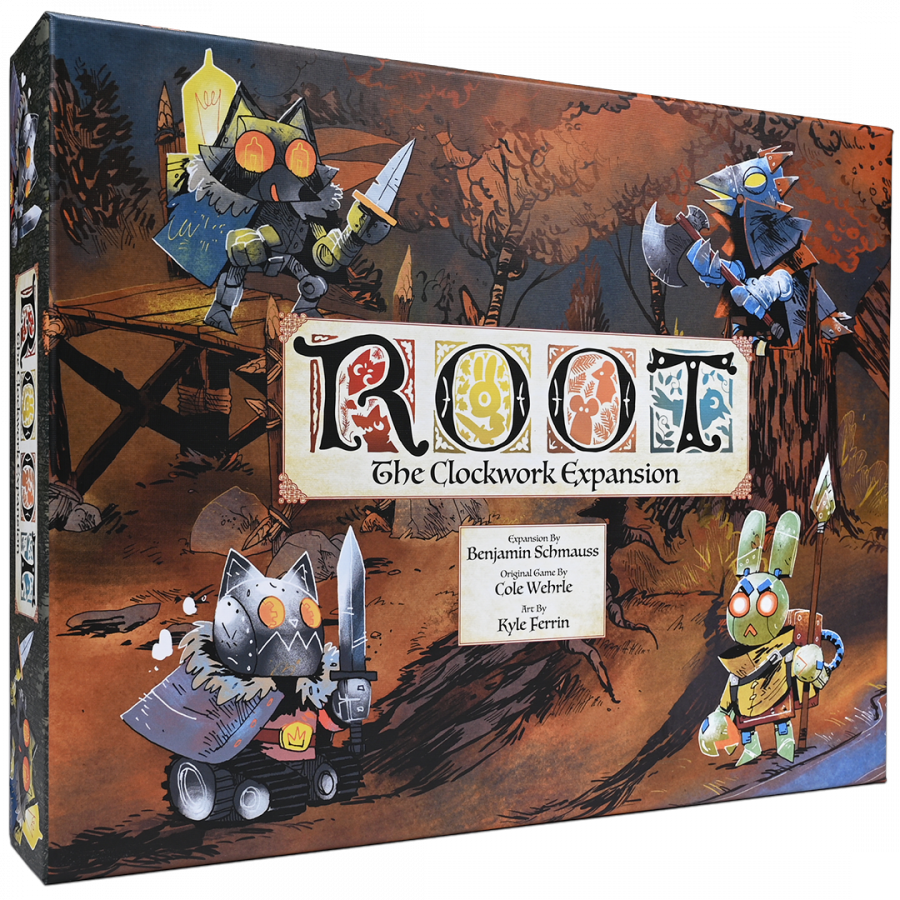 Root from Leder Games has received a lot of acclaim over the past few years. Is The Clockwork Expansion a worthy addition, or is it like so many other solo-modes: boring and repetitive?

Derek has our review for the Root base game here, so I’ll just be including a few of my thoughts on this already-great game (also a 9/10 from me, though I found that our 3-player games took just around an hour).

I love games where I feel like I’m playing through a story, not just managing cards and resources. Root delivers this in spades with vibrant woodland scenes and detailed faction backgrounds. Marquise de Cat is trying to exert her rule over the forest, Eyrie Dynasty is striving for dominance as well while remaining true to tradition, Woodland Alliance is essentially the Rebel Alliance from Star Wars, and the Vagabond is taking advantage of the war-torn woodland.

Not only do these stories come through in the form of background info on the player boards and cards, but they manifest themselves in the gameplay: Marquise de Cat is trying to rule over and build throughout the entire forest, Eyrie Dynasty has to hold to tradition or suffer the consequences, Woodland Alliance must use guerrilla tactics and usurper groups to be successful, and the Vagabond must walk a fine line between aggression and mutually-beneficial trading.

The Clockwork Expansion adds automa (non-player-controlled) versions of all 4 standard Root factions. They work well; Benjamin Schmauss did an excellent job of making sure these bots weren’t just a haphazard, tacked-on expansion for those of us who would like to play Root more than our gaming friends. The bots can even be customized with difficulty adjusters and trait modifiers so you can play against a different variation of each automa.

The Automated Alliance actually is crazy. They are also the most confusing and difficult of the bots, and stopping them from winning often requires most (if not all) other players targeting them. They will spread sympathy and revolt much quicker than a human player could, and while they won’t attack, they will populate their bases quickly. This is the least fun faction to add in as a bot, partially because they require more attention than the other bots and partially because I enjoy playing as the Woodland Alliance so much.

The Vagabot plays similarly to the regular Vagabond (player-controlled version): run around the map, explore ruins, trade, and battle. This one is my favorite bot because it replicates a human player so well. One difference is that, most of the time, the Vagabot will grow its fighting prowess a lot quicker than the Vagabond will. Another difference is that the Vagabot will immediately make every other faction hostile towards itself, which means it can rack up points quickly.

Once you get familiar with how the bots work, there are a few small ways you can take advantage of them. However, those small advantages rarely add up to a victory, and the bots make up for their lack of intelligence with an overabundance of actions and battles. Playing against these bots is like fighting Uruk-Hai: they’re not always going to make the smartest decisions, but they’re going to be stronger and faster than you, so you better make smart decisions if you want to win.

Another excellent attribute of The Clockwork Expansion is its versatility: you can add these bots to fill out a 1-3 player game, or you can go toe-to-toe with them in a co-op mode where you and a friend take on 2 of the bots. This expansion is highly customizable because of its versatility; add that to the trait cards and varying difficulty and you get a sandbox of Root content that’s accessible even if you only have 1 or 2 players.

Playtime with bots is shorter, if anything, than playtime with human players because bots don’t suffer from analysis paralysis. Each bot’s turn is well-defined, and after your first game with a bot, it’s no problem adding them to a game and going through their actions for them (for reference, my first game with the Electric Eyrie and Vagabot took me 1 hour, including set-up). Moreover, if you already know how all the base factions work, the bots are rather simple to learn.

Of course, the art and components are excellent, just don’t expect new robotic animeeples: you’ll need to use the base game’s animeeples. Aside from the 4 bot boards, this expansions comes with the aforementioned trait and difficulty cards, but that’s it, so there’s a lot of empty space in the box.

If there was a flaw in The Clockwork Expansion it would be that the Automated Alliance is more difficult to beat than the other factions. (Again, though, the difficulty can easily be tweaked.) But come on, who doesn’t enjoy a challenge every now and then?

The bots are diverse like the factions, and they play the game as well as you want them to with as little upkeep and game-management as possible. The Clockwork Expansion should be the measuring bar for bot-based expansions.

The Clockwork Expansion should be the measuring bar for bot-based expansions. Fantastic.