Ever since the smash success of Dominion in 2008, deck-building games have been pervasive all across modern board gaming, from uninspired clones to clever games that use deckbuilding as only one small piece of a larger whole. Many famous designers have decided they also need to put their own spin on it, so it’s no surprise to see Rüdiger Dorn taking a crack with Rune Stones. Despite  a central board full of bits, this is primarily a card game where players collect and exchange a variety of tokens for points and abilities. Can it stand out in a crowded genre? Let’s take a look. 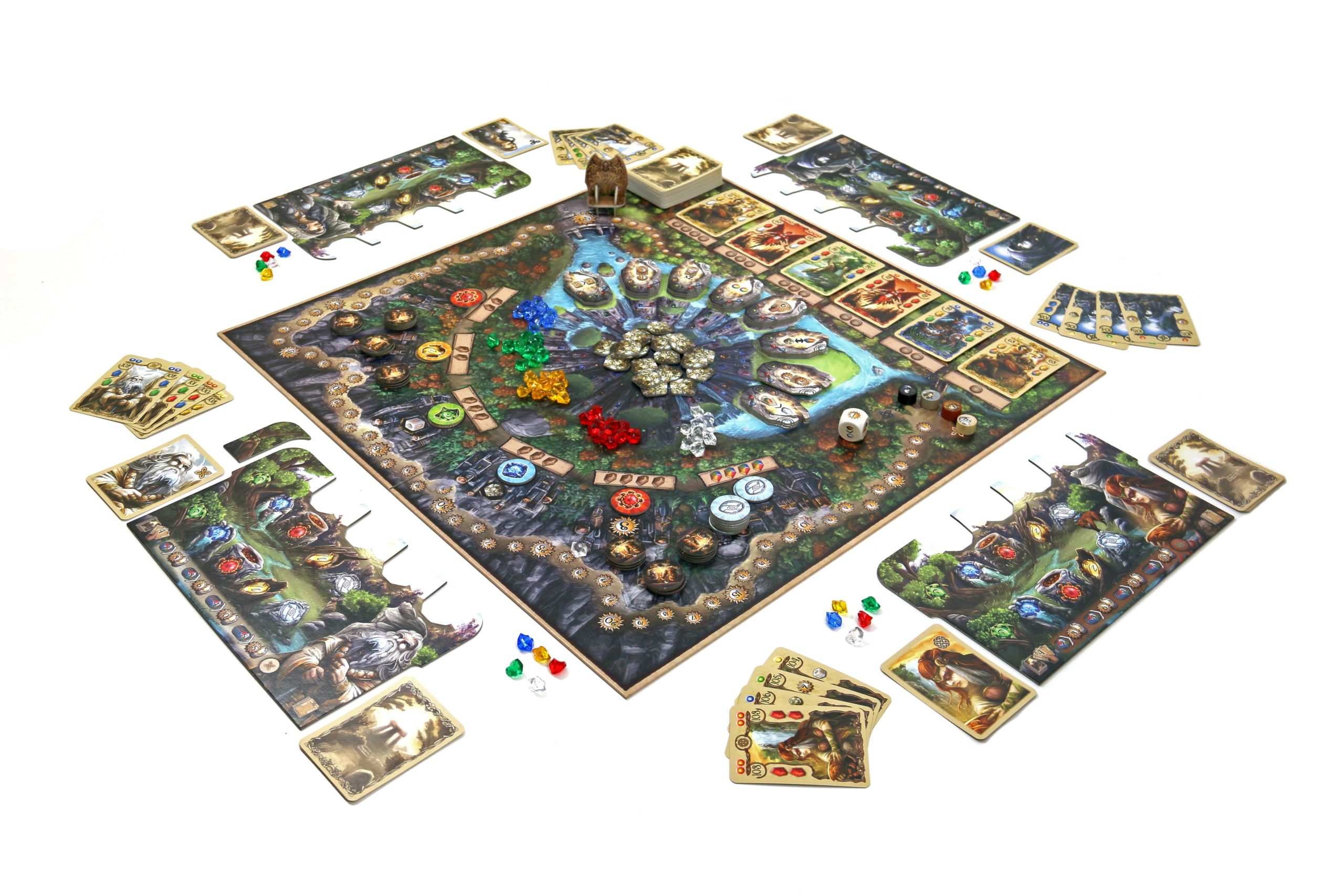 I was a bit shocked to see the sticker price when looking this one up. The game has a lot of tokens and gems, but it is primarily about the cardplay. The central board is really just a place holder for pieces, as are the player boards. I have a hard time seeing how this game ended up at $64.99 MSRP, when you can get an equally complex deckbuilding game like Star Realms for $14.99. Rune Stones also doesn’t look especially great; the fantasy artwork is generic and bland. A nicer look, and a simpler, cheaper package might have helped this one garner more attention.

Even then, though, I am sorry to say that the gameplay of Rune Stones fails to impress. Dominion worked so well not only because of its new mechanism, but because it was smooth and elegant. If you truly think dumping a bunch of new mechanisms onto a deck-builder will improve it, then you had better come with something truly impressive. Instead, Rune Stones crams in too many unnecessary ideas.

The first and foremost problem is that the sequence of play just has too many things in the sequence needed to get points. You buy cards for your deck (and even the colored-money system is awkward); you play those for actions (mostly to get gems); you exchange gems for artifacts; you exchange artifacts for points and Rune Stones. This is at least one (probably two) too many steps; back in my day, you bought things with money and that was it. While I enjoy buying new cards for my deck and the strange way cards are played in this game (you play two, but lose one forever), the extra steps of buying the artifacts, and then exchanging those for points, feel entirely unnecessary.

It doesn’t help that these ideas also make the game unnecessary complicated, making it more difficult to teach. In most deckbuilders, you just play your hand and go at it, but here you have to pick between three actions and then have one other action that’s always available as a second move. It would really help to have the actions laid out on the player boards, like how the scoring is, but the player board is just mostly empty space.

Of course, the name of the game is Rune Stones, and those are the most interesting part: when you exchange artifacts for points, you get a permanent ability that upgrades some part of the game for you (play more cards, draw more cards, have more money, etc.) and these are a great idea. But these are easily added to other deckbuilding systems (in fact, Dominion expansions already have similar concepts) and don’t necessitate their own separate game. So, even the most interesting ideas here are not original.

And that’s really the problem: there is nothing new to see here, and there’s no excellent delivery of old concepts. Either could be enough to catch my eye, but instead, this game comes across like one of those first cluttered, unoriginal Dominion copycats. Some games got away with that in 2009; but that’s nowhere near good enough a decade later.

Thank you to Queen Games for providing a review copy of Rune Stones.

Despite having some unique new ideas, I can name at least ten other deckbuilders you should play over Rune Stones.