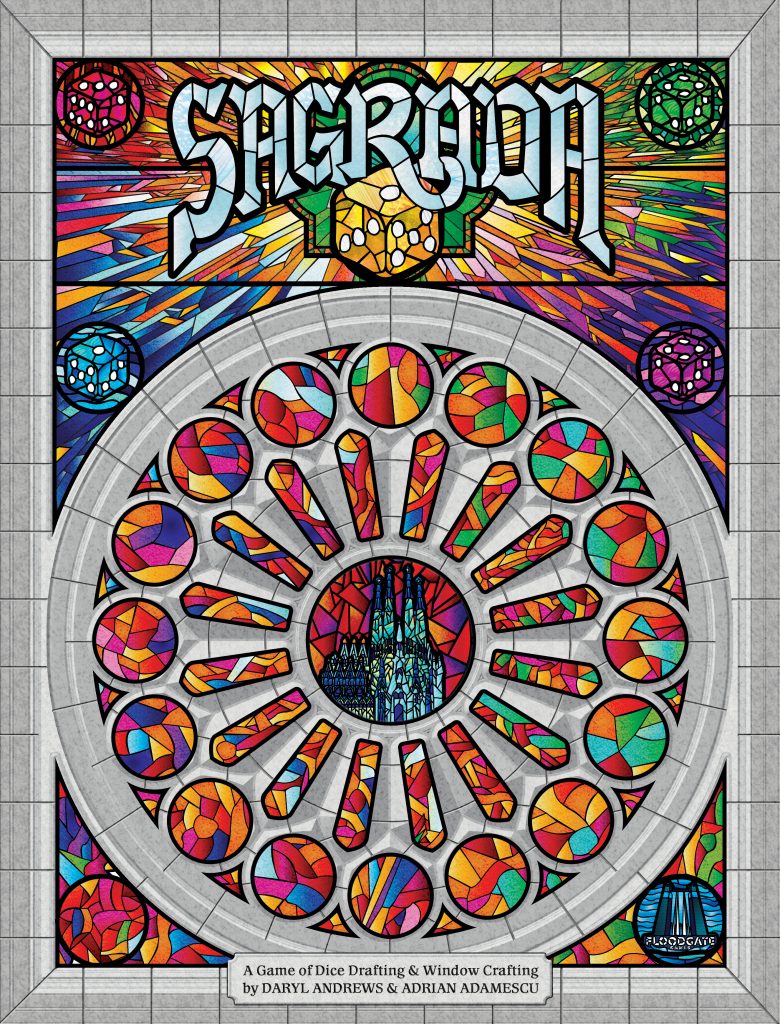 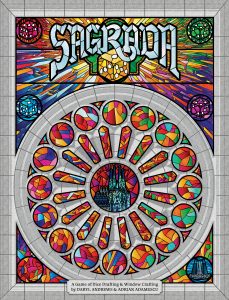 Sagrada is a 2017 release from newcomer publisher Floodgate Games. It is a visually stunning game of dice drafting, in which one to four players represent glaziers creating beautiful stained-glass windows for a cathedral.

Every so often, a game comes along that stands out to me among the rest. Sometimes, it’s a clever new mechanism the game is trying, sometimes it’s a fresh theme, and sometimes it’s just gorgeous artwork. Sagrada has all three of these things.

Sagrada is a game about creating beautiful stained-glass windows for a cathedral. Inside the box are ninety translucent dice in five colors, player boards, cards, glass tokens, and two cloth bags. The game’s visual presentation and component quality are top-notch.

Each player receives a personal board with a four-by-five grid of slots in which to place dice. The boards are constructed so that a special card can be inserted into them which provides specifications for players’ windows. A player’s card will have requirements such as a certain slot must be filled with a red die, and another must be filled with a die showing a three. Depending upon the relative difficulty of a player’s window, she will receive between three and six glass tokens which can provide assistance in constructing it. Everyone also receives a card showing one of the five die colors. The more dice a player has of this color at game end, the more points she will receive. 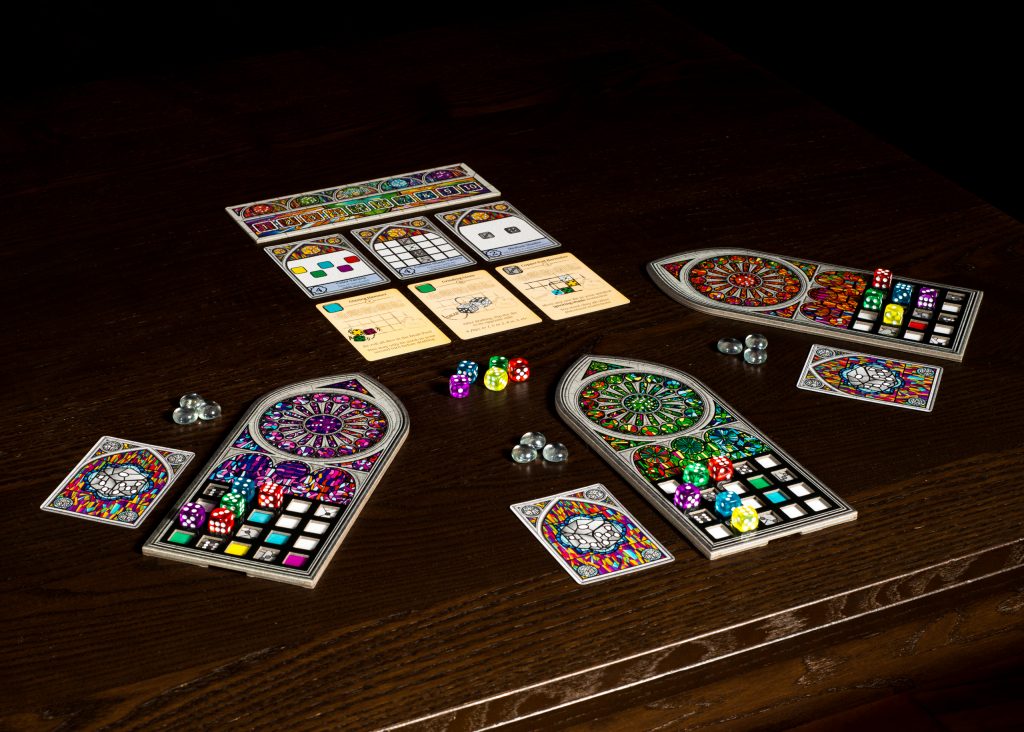 The goal of the game is to score the most points by creating the most spectacular window. Each round, the active player draws a number of dice from the draw bag and rolls them. One at a time, players take turns selecting a die to add to their window. The game lasts ten rounds, and players will select two dice each round.

Mechanically, Sagrada really shines because of one particular rule: like dice cannot be adjacent to each other. This means a player may not place, say, two blue dice or two fours next to each other. This single placement restriction gives Sagrada a surprising amount of strategy, as players must always be thinking ahead. When building their window, players have to make sure they don’t accidentally create an impossible situation. As an example, if a player’s window has a slot that must contain a red die, the player needs to be sure she doesn’t place a red die in an adjacent slot, thus rendering the spot inaccessible.

In the middle of the table are three cards that provide special abilities to all players. These abilities can be things like:

Players may use these abilities on their turn, but they must pay for them using the glass tokens they received at the beginning. Cleverly, the first time an ability is used, it costs the active player only one token. After that, all players must pay two tokens if they wish to use it.

Also in the middle are three common objective cards which can add to players’ scores at game end. These may reward points for players having no repeated colors in a column, no repeated numbers in a row, sets of threes and fours, etc.

After ten rounds, players score their windows. In a bit of a point-salad scoring system, players total their points from their private color objectives, common objectives, and leftover glass tokens, and subtract points for unfilled window spaces. The player with the highest score wins. 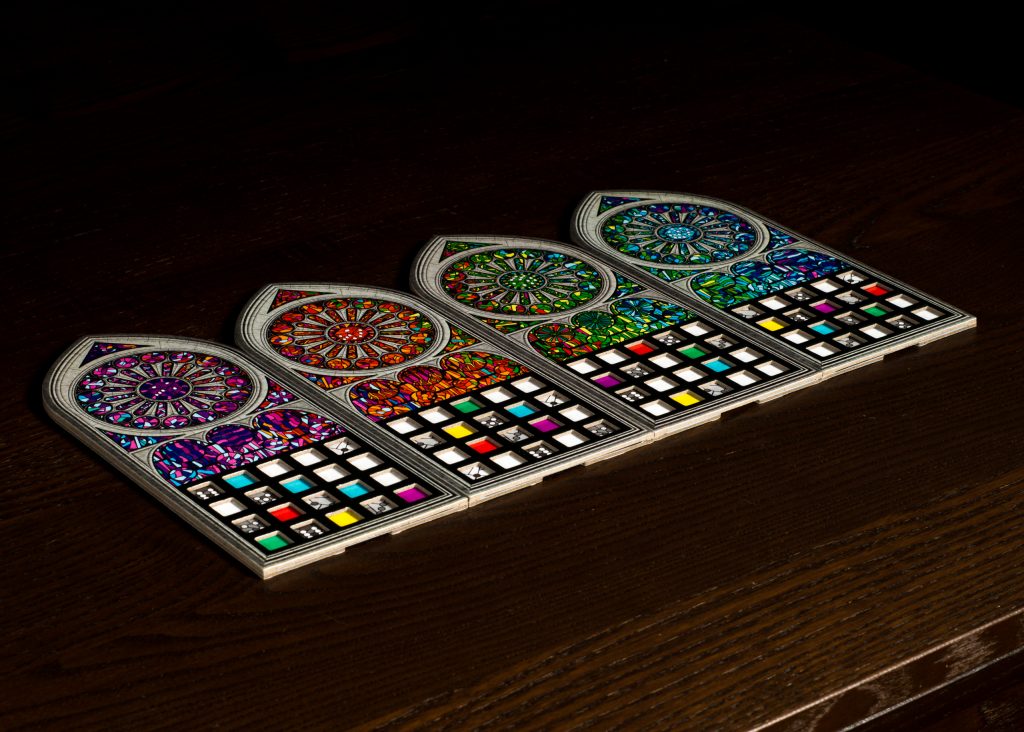 Perhaps the best comparison I can make is that Sagrada feels like a sudoku puzzle. It tickles your brain in that same way. I can see this game appealing to all kinds of people; it’s simple enough that new players will have no problem understanding what’s going on, but it’s crunchy enough that experienced gamers will be engaged throughout. As an added bonus, the solitaire game is very intriguing, and it presents players with new decisions to make.

Floodgate Games really knocked it out of the park with Sagrada. They managed to make a product that is visually appealing, thematically fresh, and mechanically creative. This is the kind of game that begs to be played again. It’s one of the best games of 2017, and I highly recommend trying your hand at making a stained-glass window.