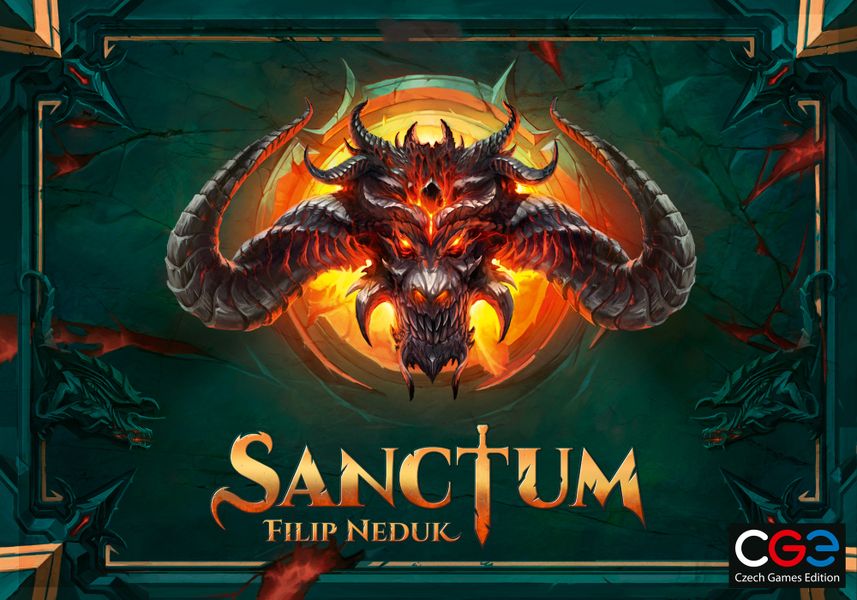 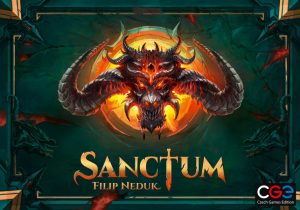 Sanctum is the latest release from designer Filip Neduk, who also designed the “first-person shooter” board game Adrenaline. Published by CGE, Sanctum feels like the tabletop equivalent of a fantasy RPG video game, with characters “leveling up” as they venture on their quest to slay the Demon Lord Malghazar.

The theme of good vs. evil permeates the gameplay of Sanctum. Players represent heroes pushing back against the forces of darkness, but some of the imagery – namely demons and hellscapes – may be a bit much for younger players. The game box recommends it for ages 12+, which feels appropriate.

Everything about Sanctum feels big, from its hefty box to its oversized rulebook to its grandiose theme of fighting an endless horde of hellbeasts. This adventure game progresses like an RPG, with players questing through a fantasy land, gaining items and experience, and eventually confronting a big, bad boss monster.

The goal of the game is to fend off the Demon Lord Malghazar’s end-game onslaught, but before players can do that, they have to travel the land in preparation. Sanctum has a number of boards representing its multiple “Acts” (Act I, Act II, etc.). Each Act is rife with challenges from which players can earn items, equipment, and skills. 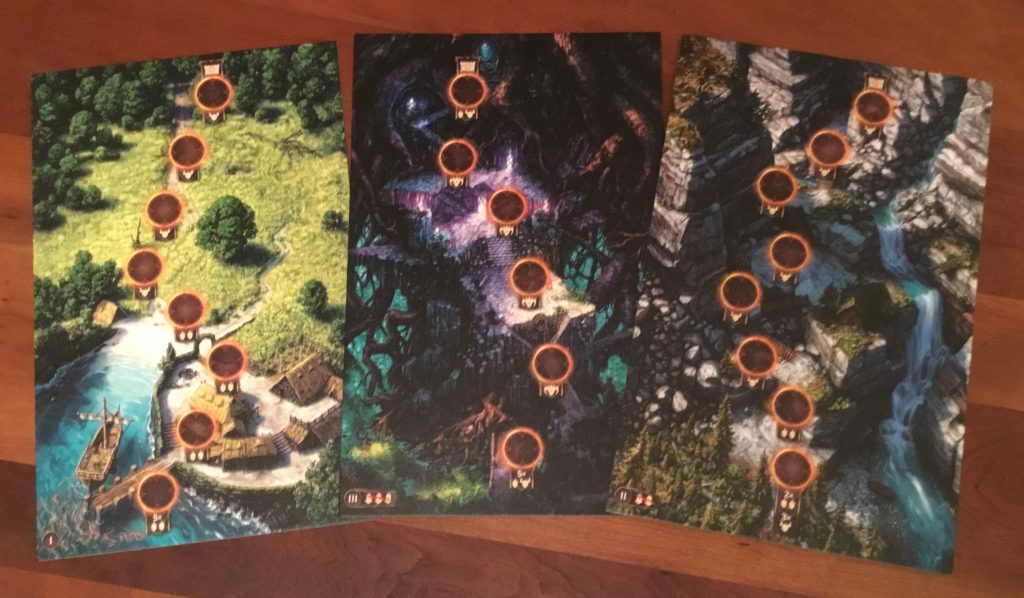 For the majority of the game, players take turns performing 1 of 3 actions: Move, Fight, or Rest. Movement is done in a leap-frog manner, with the active player simply moving to the front of the line, or moving 1 space ahead if she is already there. 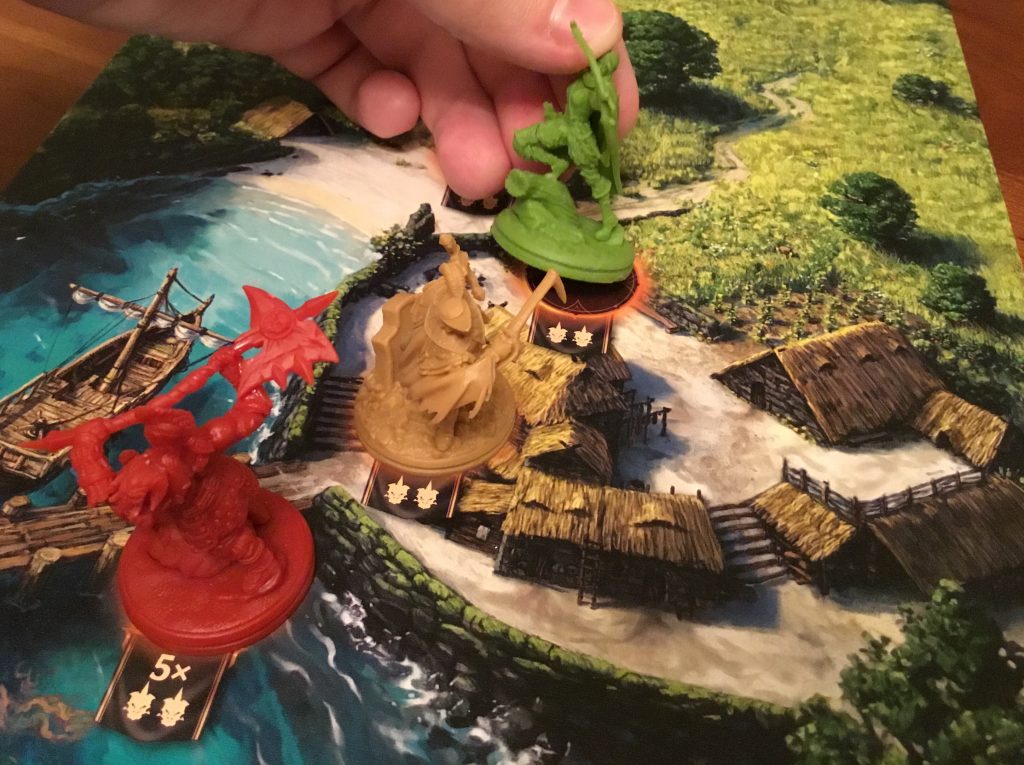 Green moves to the front of the line.

When a player lands on a new space, she must add demons to the main area and choose some to put on her player board – these demons are now pursuing the player. In order to remove them, she must defeat them with a Fight action.

To do this, the player rolls her dice. Each demon has a number of die icons on it, and the player must place matching results on a demon in order to kill it, as shown above.

On their individual boards, players each have a number of stamina and focus tokens (red and blue discs, respectively). Focus can help players to slay demons, by allowing them to modify their die results (say, +/-2 to a roll), while stamina helps players defend against the demons’ counterattacks. If any demons are still alive on a player’s board after she attacks, they will hit back, but stamina can be spent to block some or all of the damage.

When a demon is killed, it rewards the player with bonuses. For starters, defeated demons are flipped over to become item cards, but more importantly, they allow players to level up. In my opinion, the leveling is the coolest part of the whole game.

Player boards have a variety of functions, but the thing that makes Sanctum really unique is its use of a puzzly leveling system. 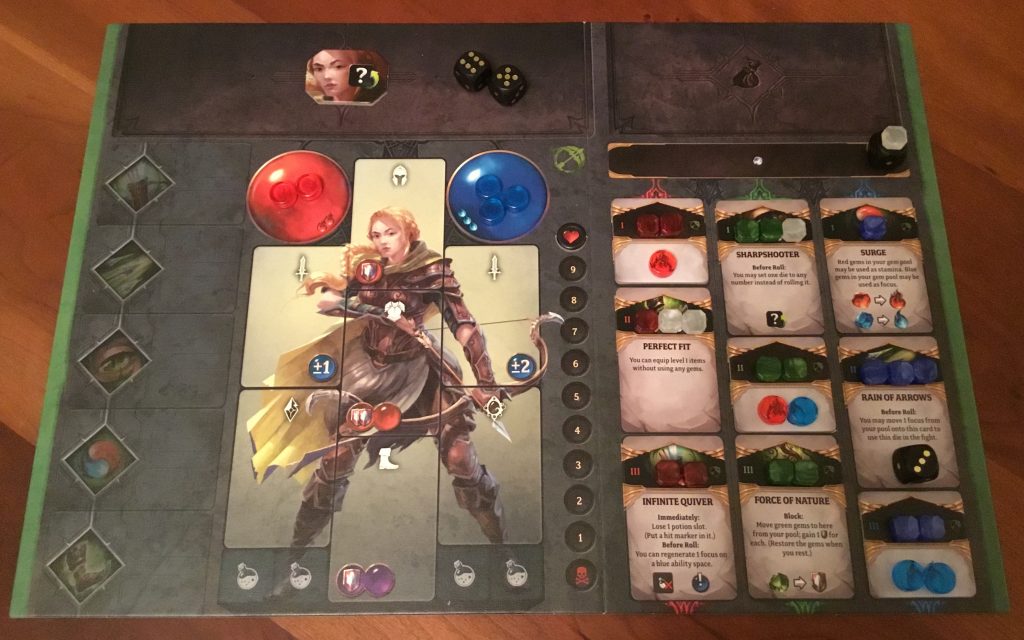 Each player board has a tableau of cards and tiles with colored gems on them. Defeated demons allow players to move these gems upward on their boards, and if a player ever moves the last gem off of a card/tile, she gains its ability. This creates an interesting spatial aspect, as players must strategize which gems to move – and therefore, which demons to fight – in order to get the most useful abilities. They do not need earn their skills in order, but if they get, say, a Level II skill first, it will make the Level I skill harder to get, since it will have more gems on it. 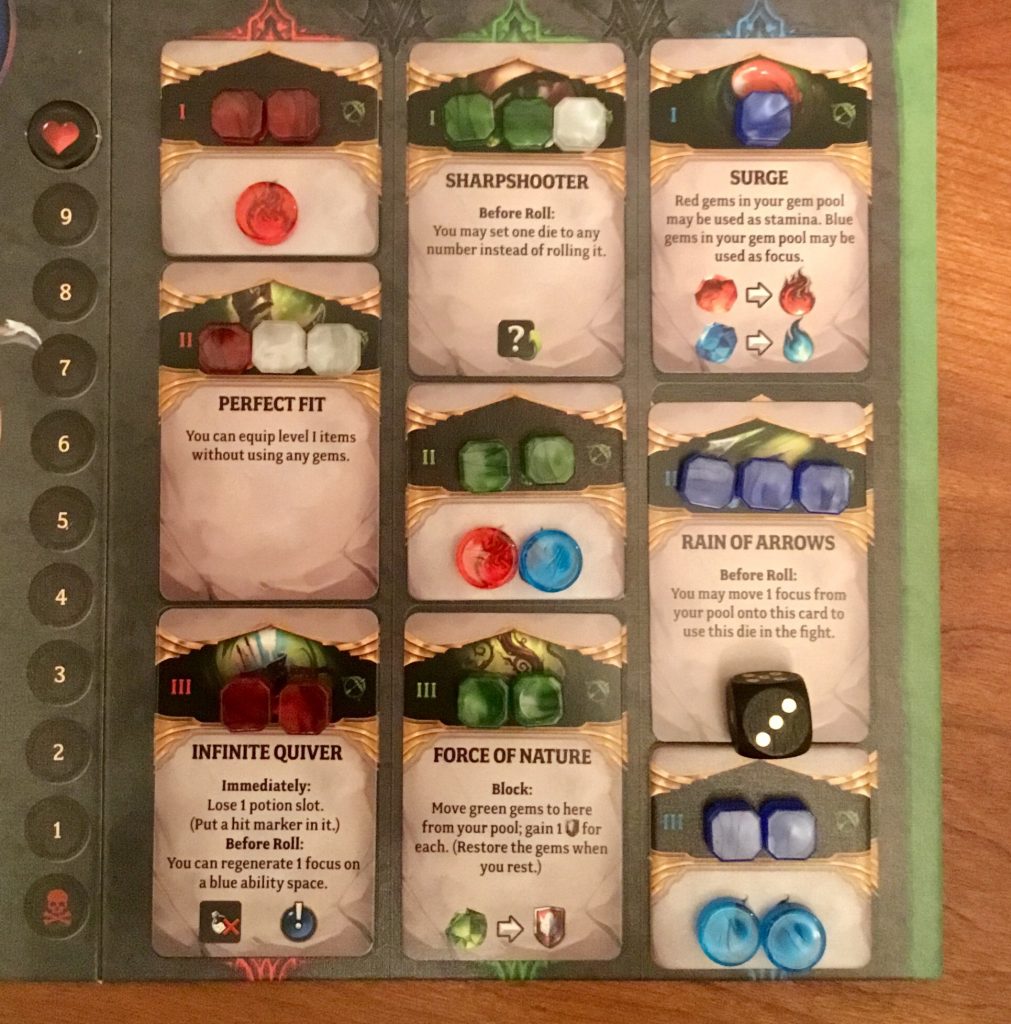 In order to regain their stamina and focus, players can choose the Rest action. This also allows them to equip items and purchase potions, which can regenerate health/stamina before a fight.

As players traverse the land, their characters will become stronger and stronger. That’s a good thing, too, because they will all the help they can get against Malghazar. When a player reaches the Gates of Sanctum (Act V), the final stages of the game begin. 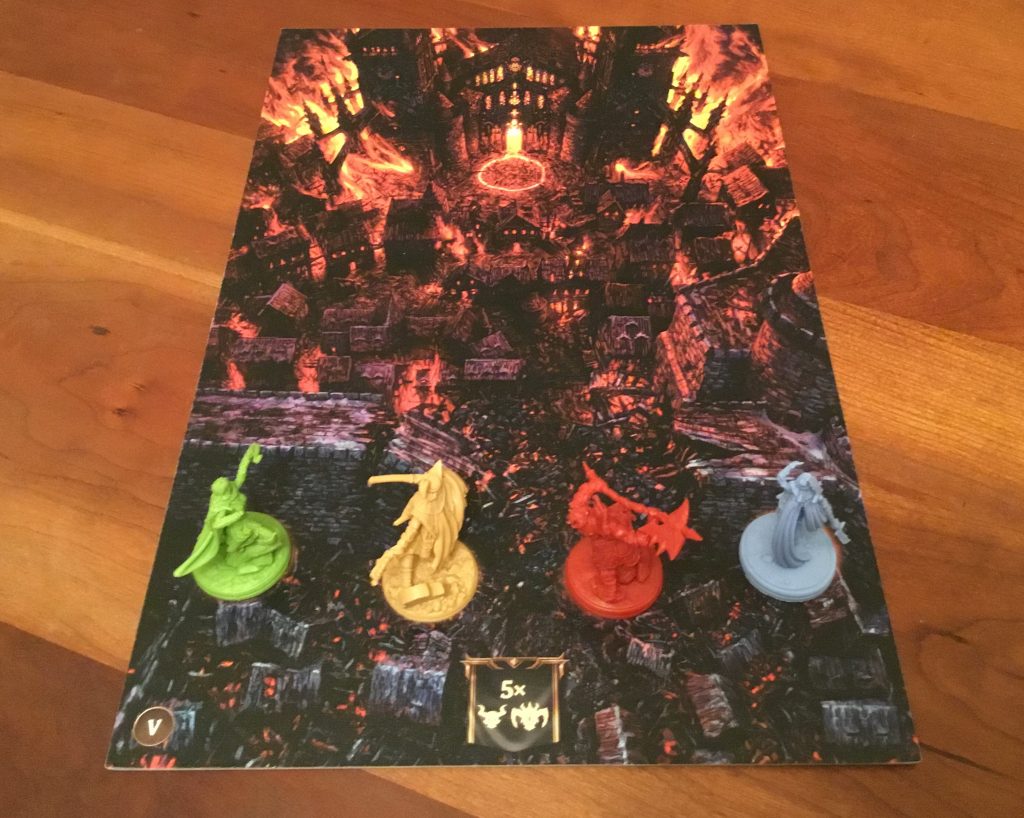 When a player has defeated all her demons, the Demon Lord appears and all players must face him individually. Now, to keep this review to a reasonable length, I won’t go too deeply into the specifics of how the final battle works, but suffice it to say it is a brutal, multi-stage gauntlet in which Malghazar pulls no punches. 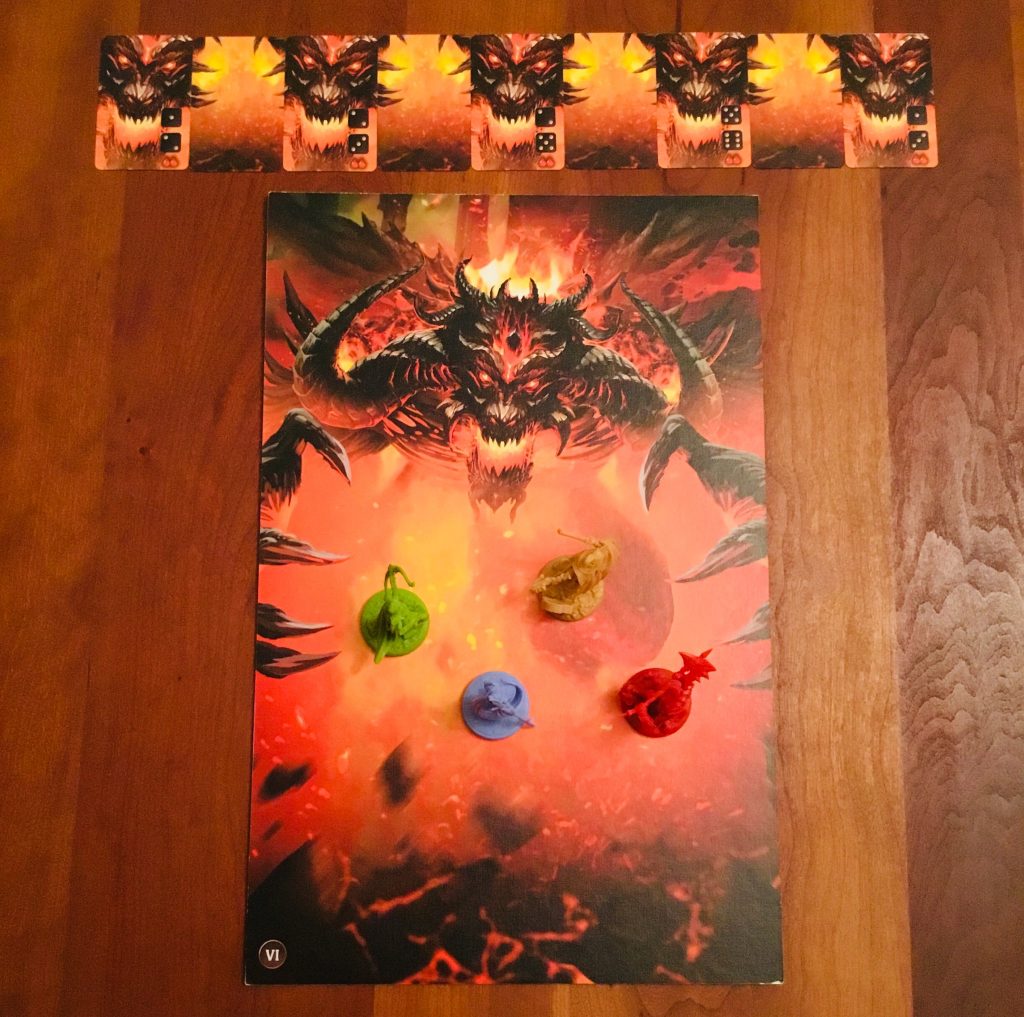 If all players perish in the final battle, the player who made it the furthest wins. Otherwise, if anyone is able to defeat the Demon Lord, the player to do so with the highest remaining health wins.

If I had only four words to describe Sanctum, I would call it “Diabolo: The Board Game.” Playing this game feels like going on a grand adventure. The idea of questing across multiple, scenic boards reminds me of the old Lord of the Rings co-op game from Reiner Knizia, and I’m very happy to see this idea used again.

My favorite aspects of Sanctum are its unbelievable, eye-popping visuals and its innovative leveling system. The graphic design draws players into the game’s world and makes everything seem big and epic. On top of this, it’s really cool how the characters develop, using a sort of spatial-puzzle mini-game.

However, since each of the 4 character tableaus has a prescribed setup, the game is not as customizable as it might have been otherwise. If a player uses the same character in multiple games, there will be no variation in the powers/abilities they can gain. This doesn’t feel significant enough to be a dealbreaker, but it seems like a missed opportunity.

That said, the game has a satisfying arc to it. Early on, the characters’ abilities are limited, but the enemies are fairly easy. As players get stronger, the demons scale up accordingly, and the game builds and builds to an exciting end. Win or lose, the tension should be high as players face off against Malghazar.

Sanctum provides a deeply thematic experience, so I think it will appeal to fans of Amerithrash-style fantasy games. If you enjoy RPG-style experiences like Diabolo, it might be one to check out.

A review copy was provided by Czech Games Edition.

Sanctum is an immersive fantasy adventure. Mechanically, it is fairly run-of-the-mill, but great production and a cool leveling system elevate its experience.